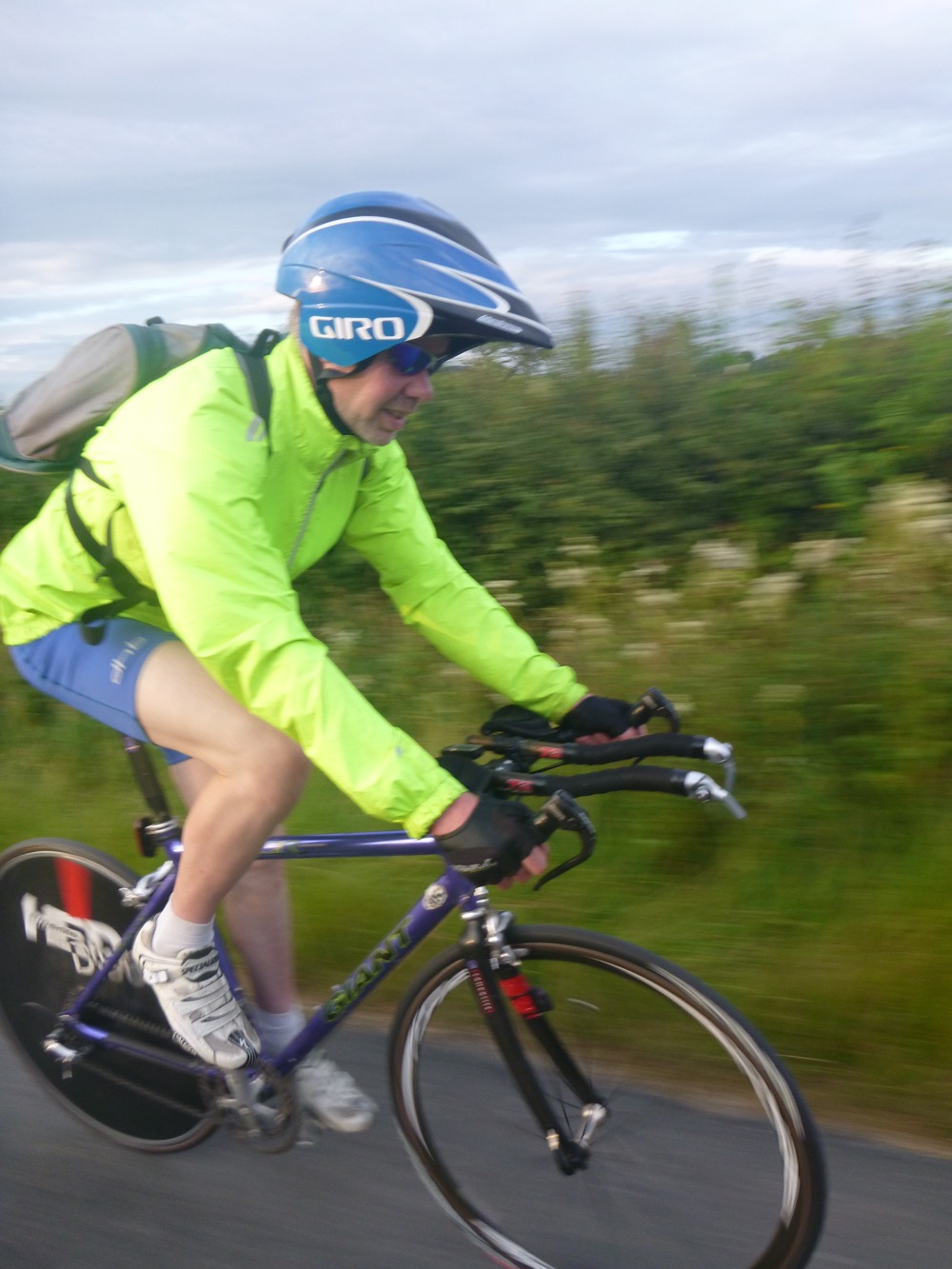 Today we’re gonna come hot out of the gate with a piece that’s been making the rounds regarding an individual’s choice in wearing a helmet, or not; 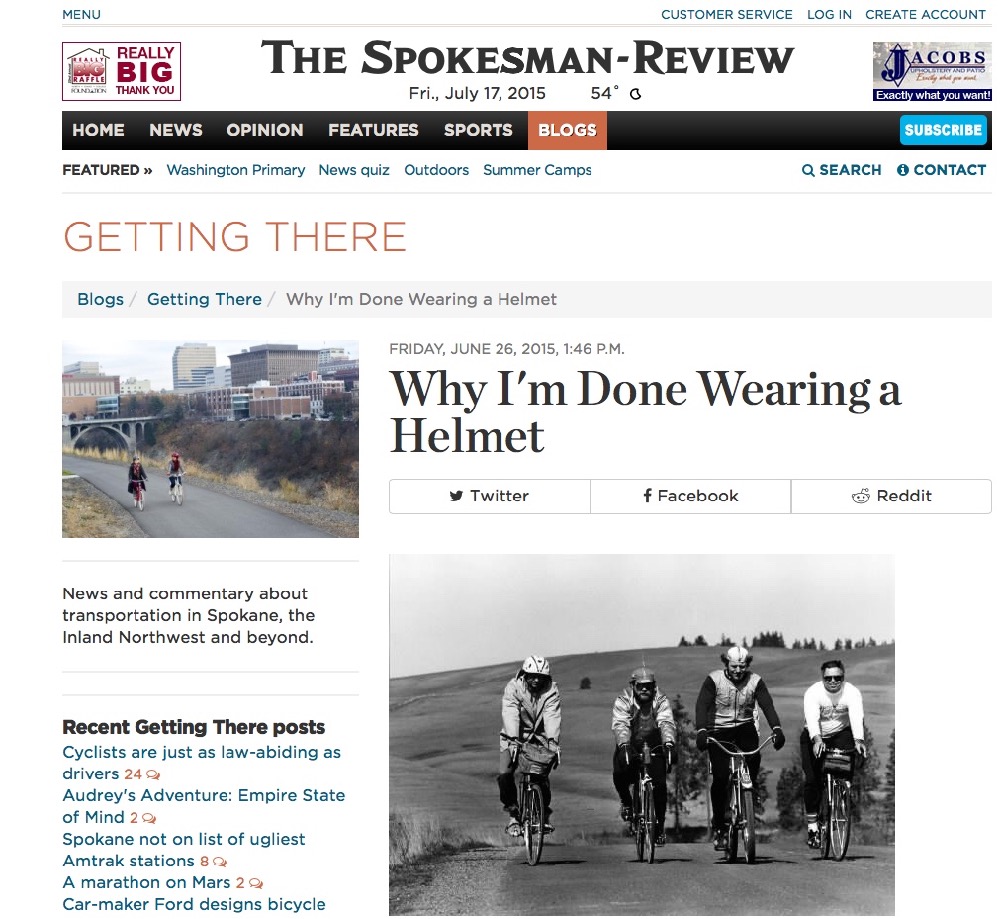 Ü-wee, does that appear to be a hot topic among bikecyclists… To wear a helmet or not, apparently that is the question. Personally, I tend to wear one, but not because a bunch of busy bodies on the internet said I should. I do because it’s a personal choice, and a personal choice it should stay.

Clearly, anyone who is a bikecyclist and spends any mount of time on the internet has at one time or another been inundated with story after story detailing cyclists who’ve been hit by cars, and regardless of the situation, media always, and I mean, every single time feels compelled to make mention of whether or not the cyclist was wearing a helmet.

A drunk driver blows a red light at sixty miles and hour, completely vaporizes a person riding a bicycle and you’d better believe that the article will mention that the cyclist was or was not wearing anything on their head.

In a sense this is a form of victim blaming, and only encourages those in power eager to legally require bike riders to wear helmets, reflective orange vests, have lights all over their bikes, bubble wrap suits, and whatever other laws they and their other buddies who I suspect have never once thrown a leg over a bike in traffic feel to be best for us.

Personally I feel that these efforts are a band-aid on a much bigger wound. Instead of addressing the fact that infrastructure is sorely lacking, and that any of us are at risk any time we leave the house, the powers that be then simply insist that it’s our responsibility to pad all the corners and be solely responsible for our own safety.

To quote this piece written by The Bike Snob;

Here’s why the auto industry, the insurance industry and the officials they lobby want helmet laws. First, forcing people to wear helmets shifts responsibilities onto cyclists and absolves governments from having to build better cycling infrastructure and drivers from having to obey traffic laws. “Want to be safer? We’re not gonna build any bike lanes. They take up too much free parking. Put this foam dunce cap on your head, you’ll be fine!” Done, and done.

Lots of people have a story about getting hit or falling down, and being thankful they were wearing one, and some of those same lots of people are very vocal about sharing those stories when confronted with the opinion of an individual who declares they don’t want to wear one.

As I said, I generally always don some form of helmet or another. I didn’t for many years, and it was finally when I began seeing my then girlfriend/now wife and saw it a ridiculous thing suggesting she wear one when I wasn’t. Still, it was our choice, and I find it silly that The Man might eventually force me to wear one, but nearly sillier still for any of us to cast judgement on someone who doesn’t make that same choice.

Ironically, just when I typed the period on that sentence, Sally from Raleigh Bikes texted me and said “Corndog is on the front page of the Seattle Times website I guess.”

I replied, “is he wearing a helmet?”

And I’ll be damned if that’s not exactly what the article is about; 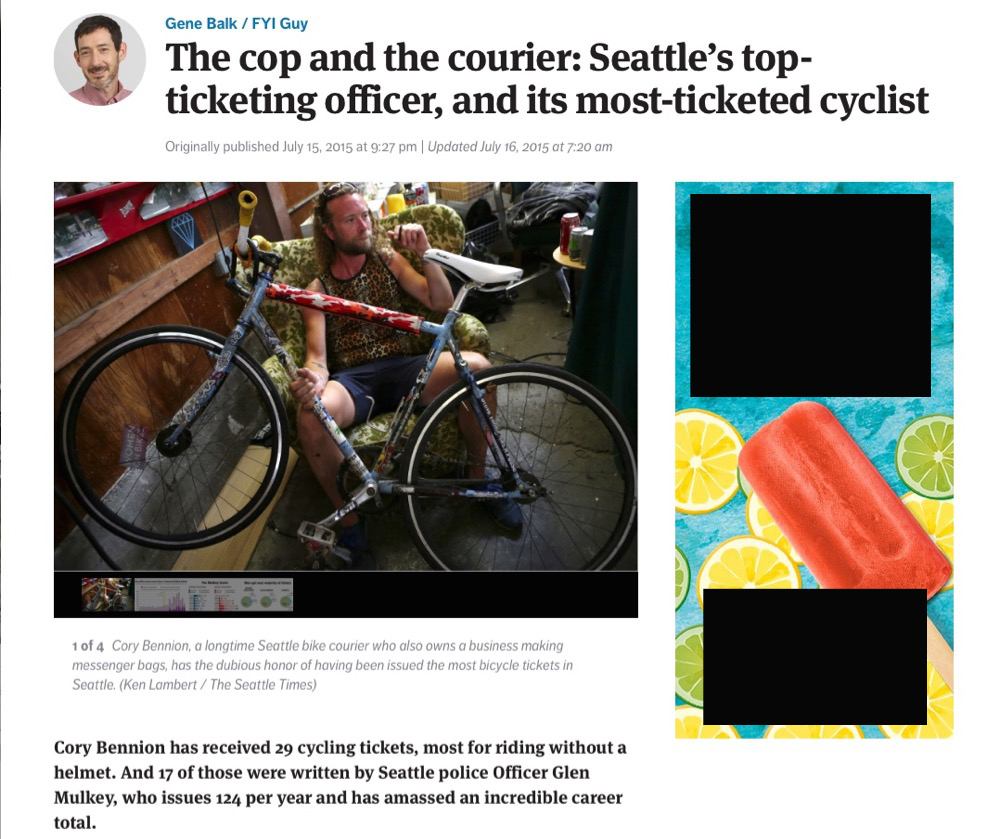 Aside from the coincidence, and though it’s neither here nor there, I also found it interesting that the article concludes with a mention that one of the city’s most prolific ticket writers was just last year charged with child molestation.

As I said, above. Wear one or don’t. Just as we wish for those who drive past us and feel compelled to make an exclamation regarding our presumed sexuality, or that we should perhaps be riding on the sidewalk, just keep your pie hole shut about it.

Anyway, with all of that being said, let’s move on to other topics.

One thing I like to do here on the All Hail The Black Market, besides make people who choose to wear helmets mad about the fact that sometimes people don’t, is to spread occasional love from Cranpa of FBM Bikecycle Company, kinda like the sort he sent the other day;

Check this bitch out!

Besides the fact that all of those kids had nothing on their heads but hats and hair, which assuredly will knock the planet off its axis, I like the cut of FBM’s jib.

Then in other corners of the world, and other axes to grind, Chip of Velocb came though with his own personal issues;

We have a new plague descending on our trails. Its possibly more evil than poop bags. Its akin to shitting on our trails and its being done by our own kind. Well not you or my kind… But two wheeled locusts who call themselves “mountain bikers”

People telling me what I should put on my head irks me, poop bags really irk me; (Seriously- This was but a sampling I collected in a short section of a short ride.)
-And people rampantly destroying trails in the name of laziness and/or faster Strava times also really, super irks me.

It’s a regular irk fest over here today, and I echo Chip’s sentiment.

If you can’t be bothered to help ensure that single track stays single, you yourself are a part of the problem.

In my former temporary home of Santa Cruz, this was a pretty huge issue, and one that no one but me seemed to ever to try and resolve. Case (kind of) in point, while I agree, this does look like a fun chute, remember that at one point not so very long ago it used to be single track; 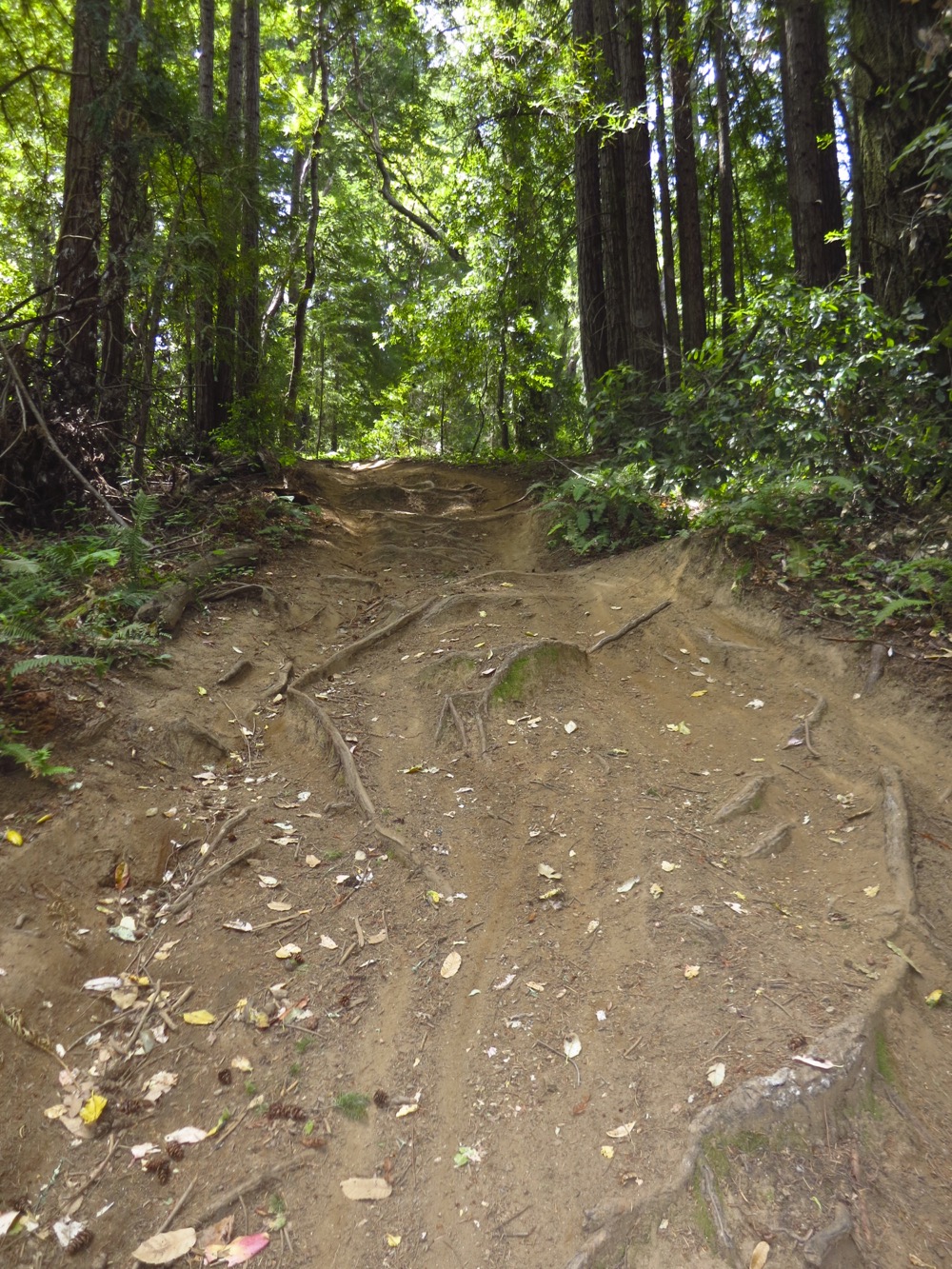 Once the rainy season comes, this will do nothing but get worse.

Still, here in Oakland I see examples of this all the time and I’m more than willing to stop my ride to cover up necessarily widened trails, cut switchbacks; 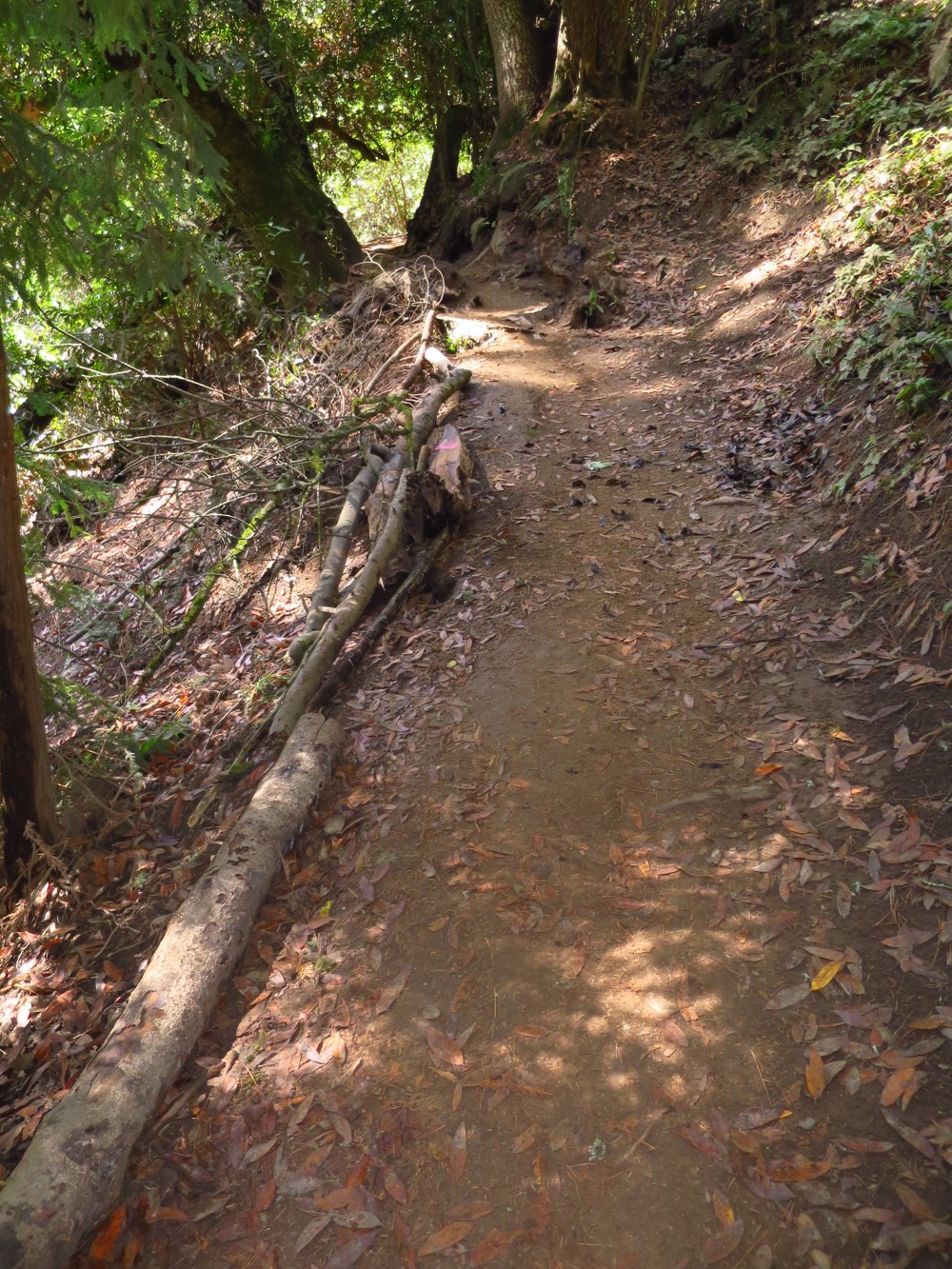 and the random short cuts; 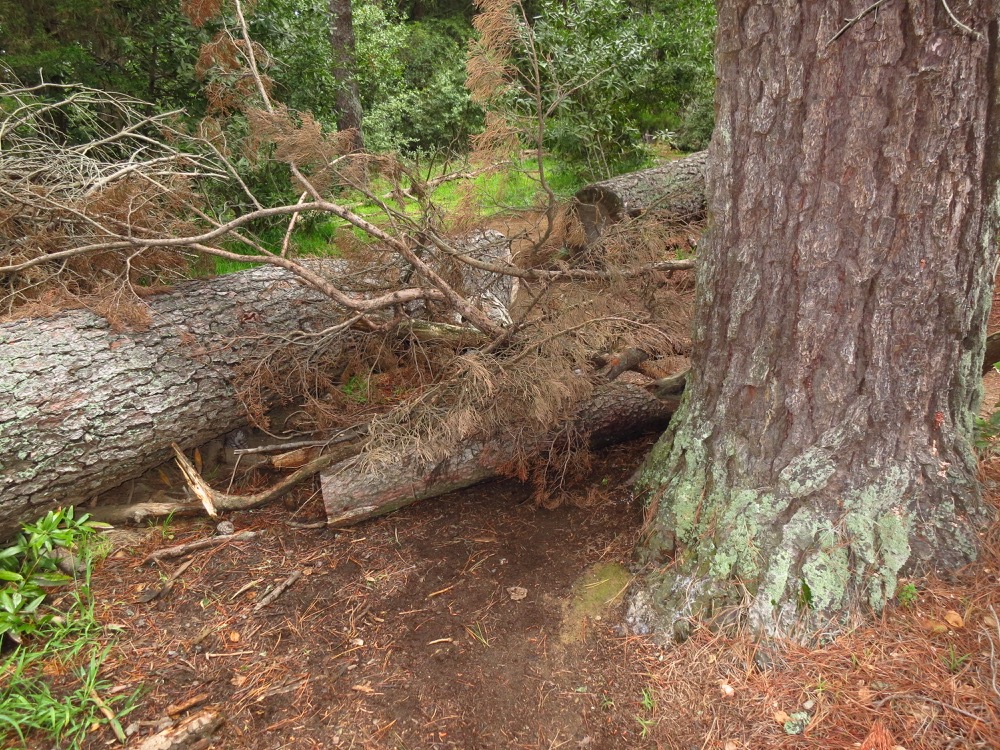 Though that one does always soothe my brain meat, there sure are a lot of things to get bent out of shape about. Maybe I’ll temporarily resolve some of them for a little while by simply going and protecting my head under a pillow.

I just gotta make sure it’s on there the right way.