After doing these month end cop-outs for a year, we have finally come to their conclusion. It was this issue when the plug was ultimately pulled from the Paved Magazine machine, and I was told to get packing. I hope you’ve enjoyed the stroll down memory lane, and either revisited, or discovered for the first time, the fruits of my literary/journalistic/whatever efforts.

As far as today goes, like I’ve said many times before, I hope you enjoy it, and if you don’t, that’s ok too. 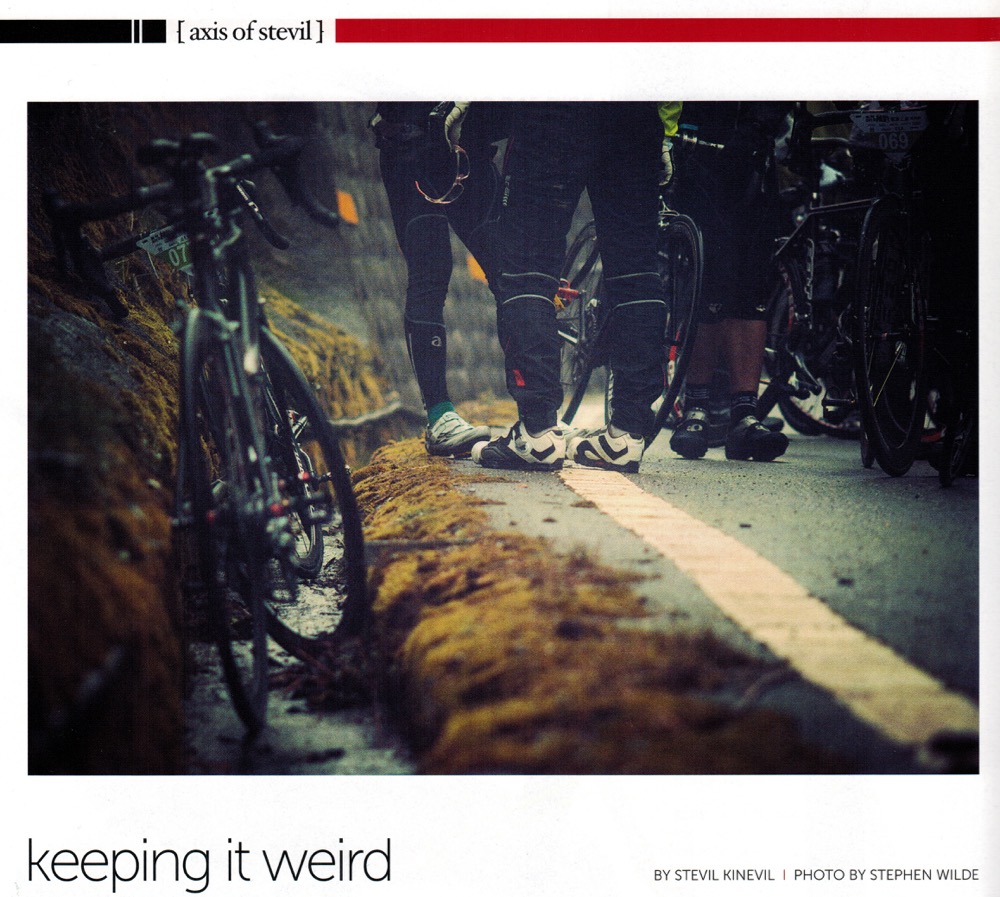 “Do you all do a regular group ride?” the stranger asked. “I mean, there are young racer types, and women… Hell there’s even a grey hair or two just like me!” This query was posed to me upon the conclusion of a group/memorial ride I hosted in October that, short of perhaps unicyclists or people resembling a Russian mobster in a Santa suit, was attended by the widest array of humanity you could hope for.

Unfortunately for my new friend, our gathering wasn’t a regular occurrence. The original impetus for the ride was simply to celebrate hairnet helmets, during which folks would don their finest ‘70s and ‘80s headwear, though attendees with more contemporary styled protection wouldn’t be turned away. In our midst we had twenty-something Cat 1 racers, and weekend cyclocrossers. We had industry legends, and an array of lady types who nearly fit all of those descriptions. We were bound for glory simply through the act of riding bikes with one another to no place in particular.

As the stranger told it, he couldn’t find a group ride where folks just simply enjoyed one another’s company and the act of riding their bicycles together. The rides he was familiar with were full of racer types, (regardless of whether they actually ever pinned on numbers or not) who were more concerned with the data and stats they would eventually download than they were with being present in the moment and savoring the experience.

His enthusiasm for our rag tag group got me to thinking about community and how blessed I am to have found myself in the midst of such an amazing one. From there I reflected upon how we as members of the bike world tend to be very linear in the way we operate. Ours wasn’t necessarily a training ride, or a team ride, but more a rolling shit show full of laughter and wheelies, and skids.

From my perspective it didn’t seem to me that we were doing anything so out of the ordinary, but based on the stares and commentary from the occasional random observer, you would have thought we were all riding around on risey-gos with flames erupting from our orifices. Based on my time riding in the front, the back and the middle of our pack, I can say without hesitation, that I’m almost positive we were and did not.

I suppose all of this is to say that regardless of what sort of bike we’re on, there’s nothing wrong with harkening back to the days of being kids riding around in circles in the vacant lot… Regardless if as kids some of us were doing nothing of the sort. Embrace the slightly weird, and try riding a bike just for the act of turning pedals, and really, truly drinking in the world around you.

Even if you happen to be surrounded by a cast of jokers who all have their beans wrapped up in the equivalent of a roll of paper towels.

Or better yet, especially if that’s the case.

One Response to “End of the month cop-out part thirteen.”