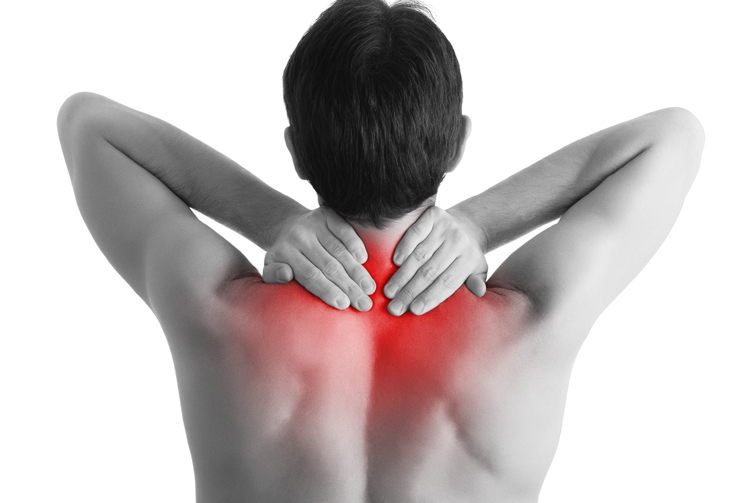 Well, we did it again. For I think the nineteenth year of my life, (I missed it one year due to an ill-timed appendicitis), I successfully navigated another Interbike trade show with my well being more or less intact; 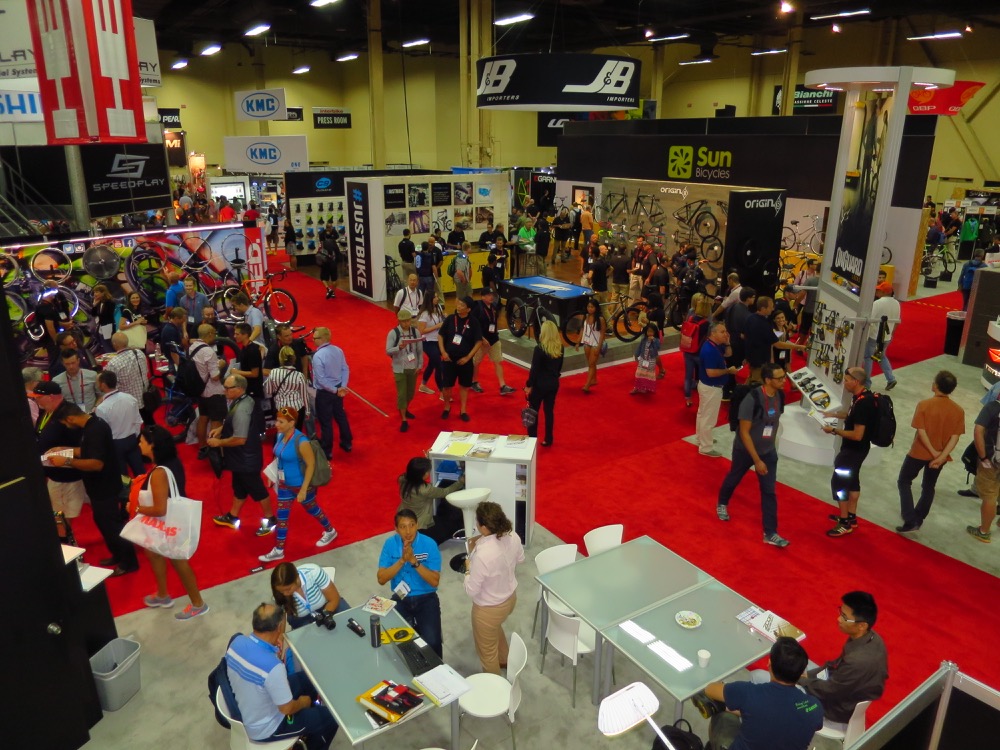 One thing I will say, is that as ‘media, Interbike gives my email address out to manufacturers who then give it out to other varying interests, so when I came home I had approximately one billion emails from Taiwanese wheel manufacturers, and sports watch makers, and book publishers, and so on and so forth. So thanks for that Interbike. It’s like I booked a trip to Vegas and came home with the virtual clap, which most obviously didn’t stay there.

Anyway, it was the same old rigmarole as it ever is.

Lots of people arriving, setting up, spending money, bitching and moaning, breaking down, leaving, and ultimately making plans to do it all over again next year.

For my part, I don’t really necessarily need to be there for any other reason than because it’s just fun to slap hands and see what’s what. For me the show hasn’t been about trends, or bike technology or anything like that in many years, if it ever was.

Which I don’t think it has been…

So again, I lurked, wandered, got lost, swung by to see advertisers (except Bern Unlimited, because I couldn’t find them on the map, and emails regarding their whereabouts went unanswered.) I suspect their booth looked something like this.

But with more helmets, and other various protective gear.

And there might not be a post for Friday as I hear I’m supposed to be in Reno with a bunch of pro BMXers. How that came about is another post entirely.

Anyway- Let’s get down to business.

As I’ve noted today (as well as the last two years), the primary focus for the show is the nice people I get to see there, so in no particular order, here are some.

My first stop, as it always is, was to see friends at Sockguy; 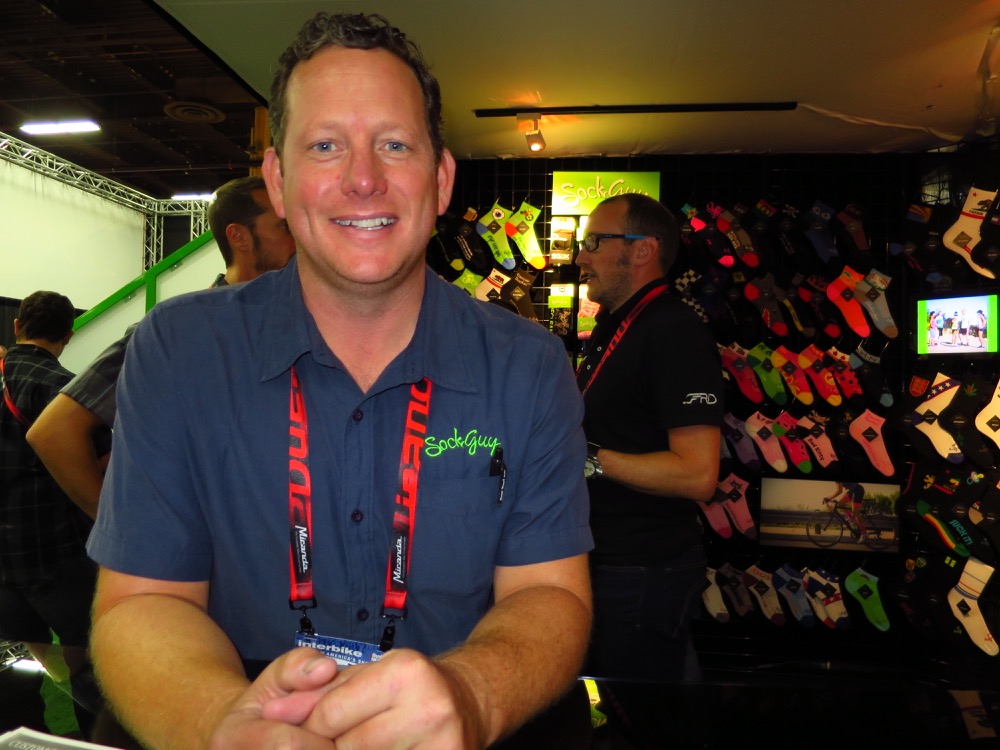 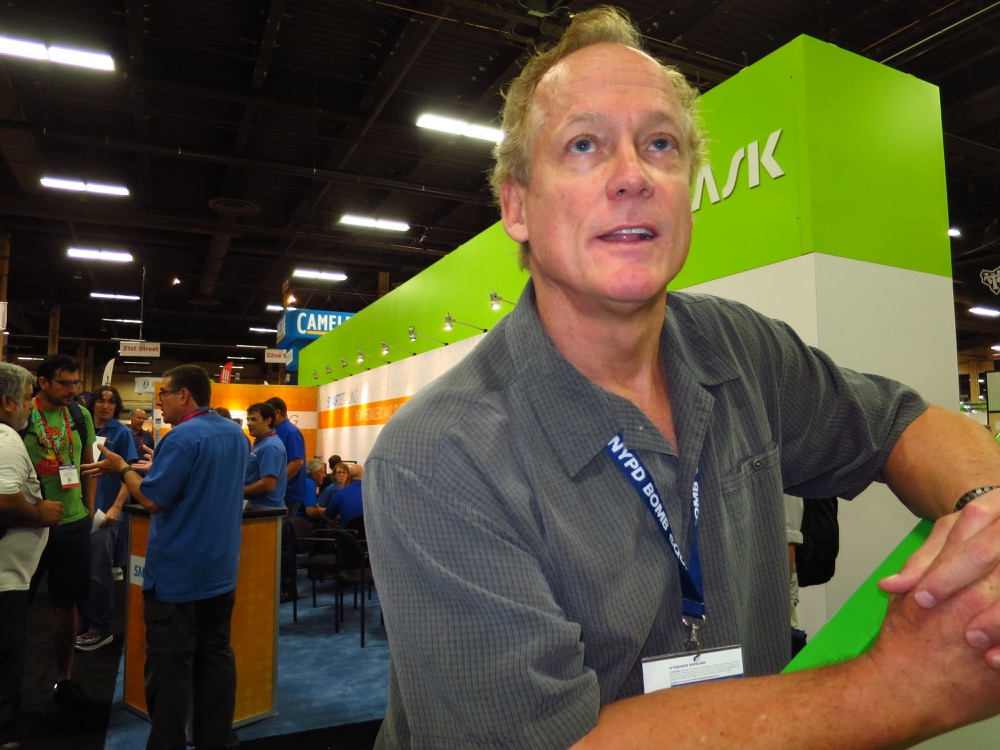 We chatted, told jokes, discussed product, as well as future joint projects, and then of course addressed Sockgate, which I will note Sockguy had no part in.

We agreed that while it was in fact an extraordinarily tasteless thing, all things being relative, wasn’t necessarily “disgusting” (as it’s been called), in comparison to say, Syrian refugees currently being murdered in mass by religious extremists with American made armaments.

But just the same, they were pretty psyched not to have been the offending party.

And that was the first conversation in the show.

However things got lighter as the day went; 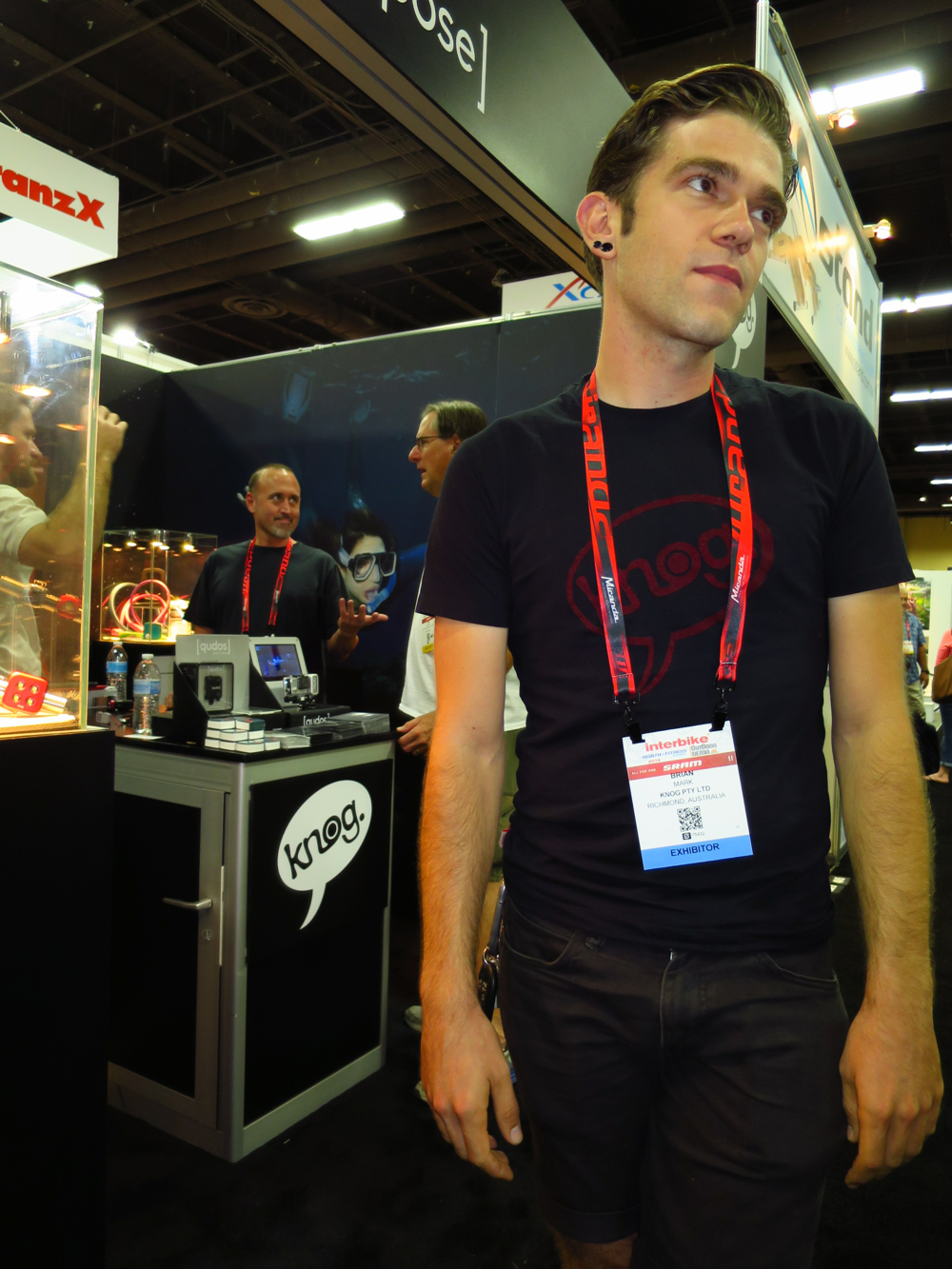 This is Brian. He’s my neighbor and he also works for Knog. I took this photo of him last year but am posting it today because the two photos I took of him this year were blurry, and also because he’s a vampire who doesn’t age, he looks exactly the same anyway. It was there we discussed Knog product, Knog dreams, Knog hopes, and Knog schemes.

I stopped by Bianchi because I used to drive their stuff out from the Bay Area to Vegas every year, so I enjoy looking at all of the product that I no longer am responsible for. 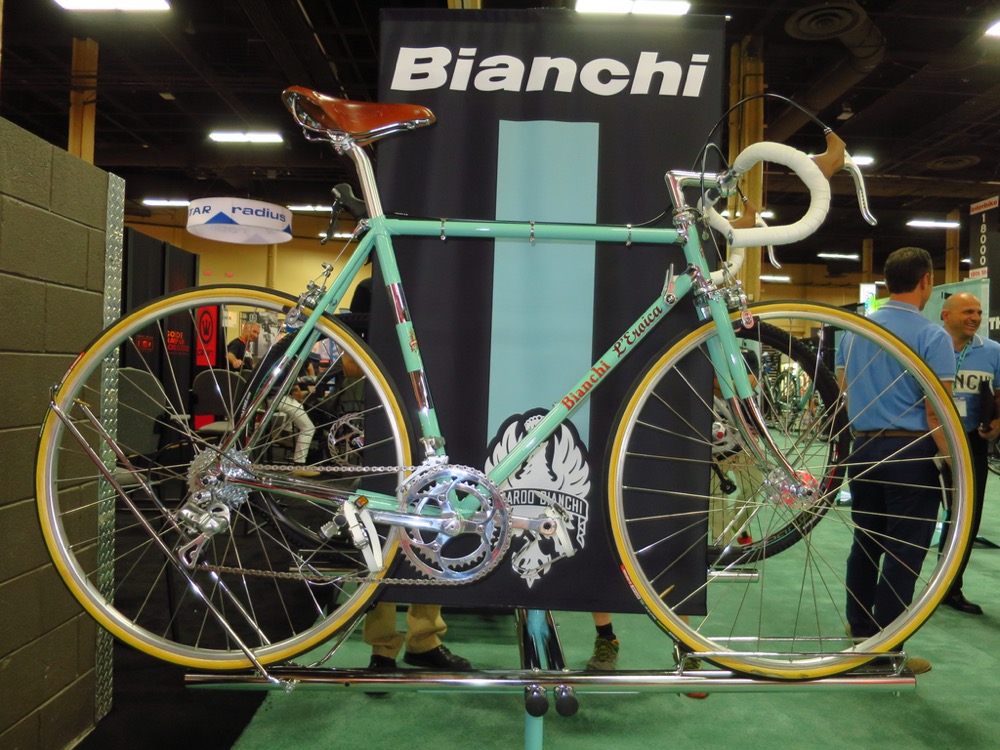 Moving on from Bianchi, I ran into this guy, whose name is actually Christopher Cross; 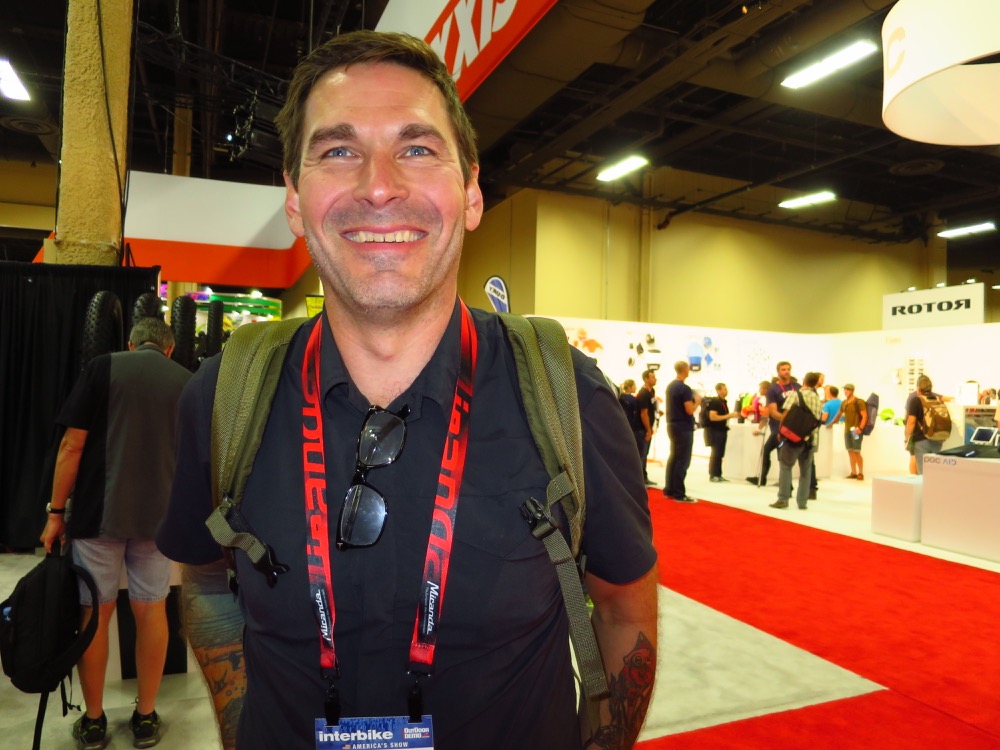 He didn’t sing to me about sailing at all.

And then we saw these people;
*Editor’s note. A small percentage of people depicted here are women, which really isn’t a fair overview of the general interactions I had. Basically I think this year I felt more comfortable about shoving my camera in the face of men. I apologize if my ‘reportage’ seems out of balance.) 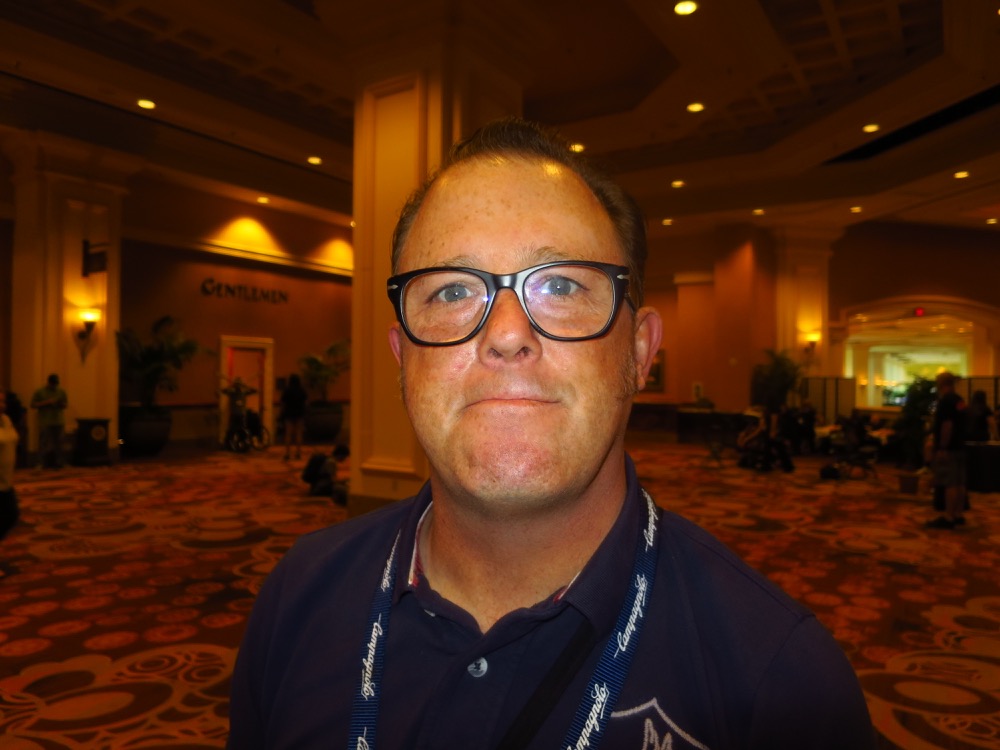 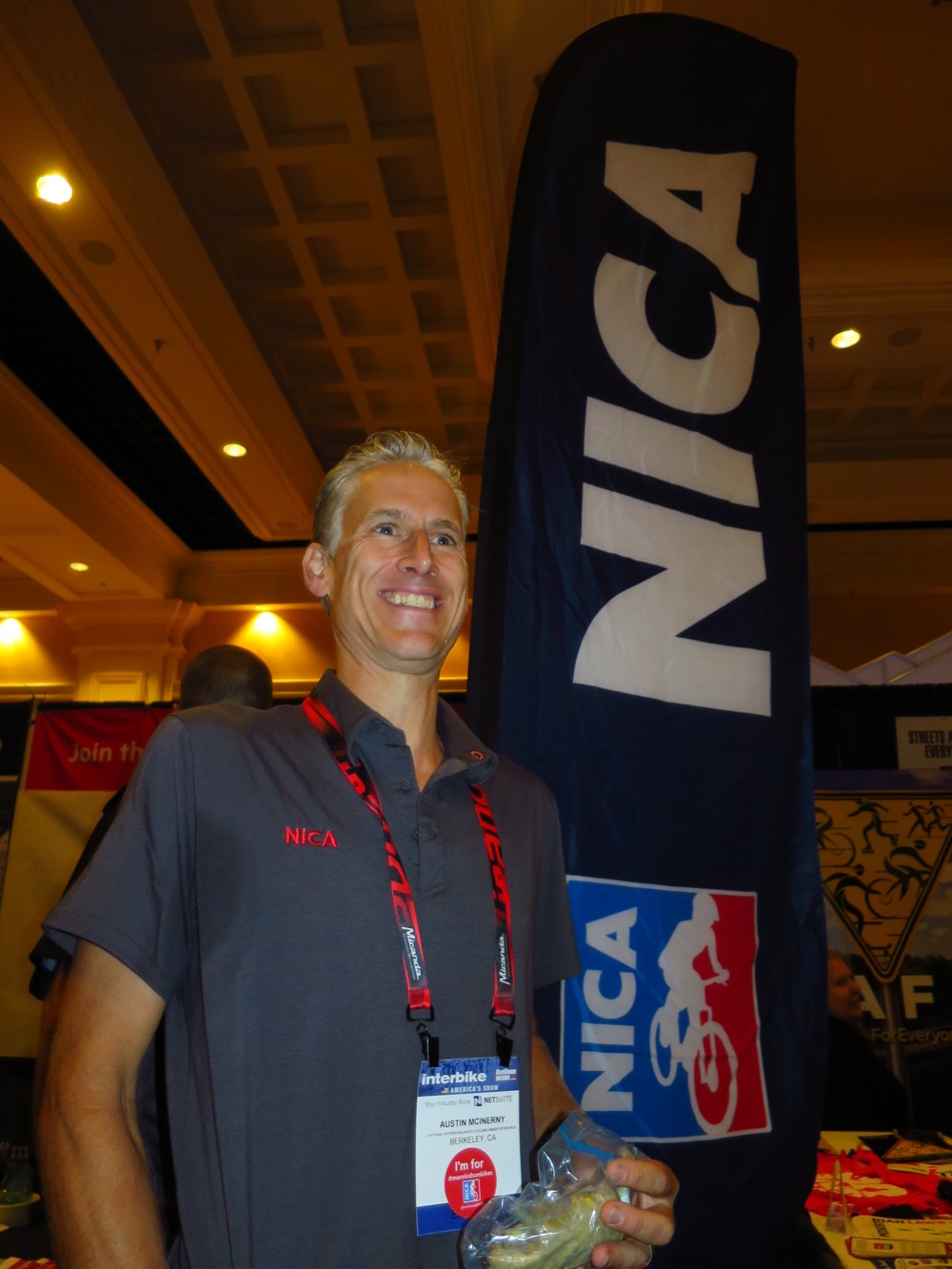 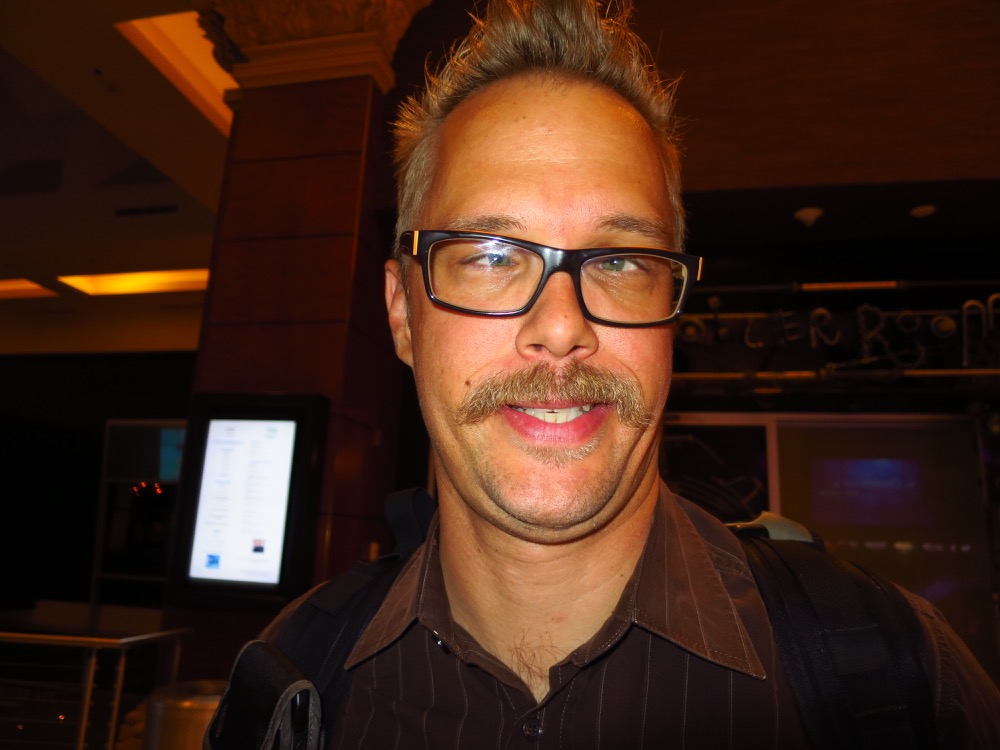 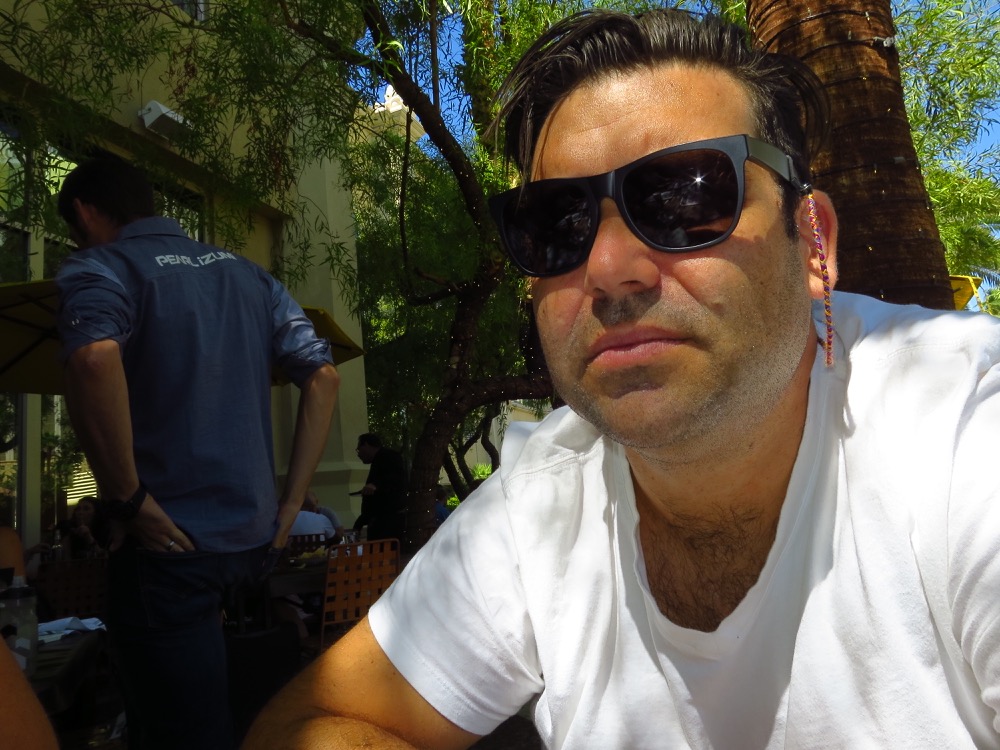 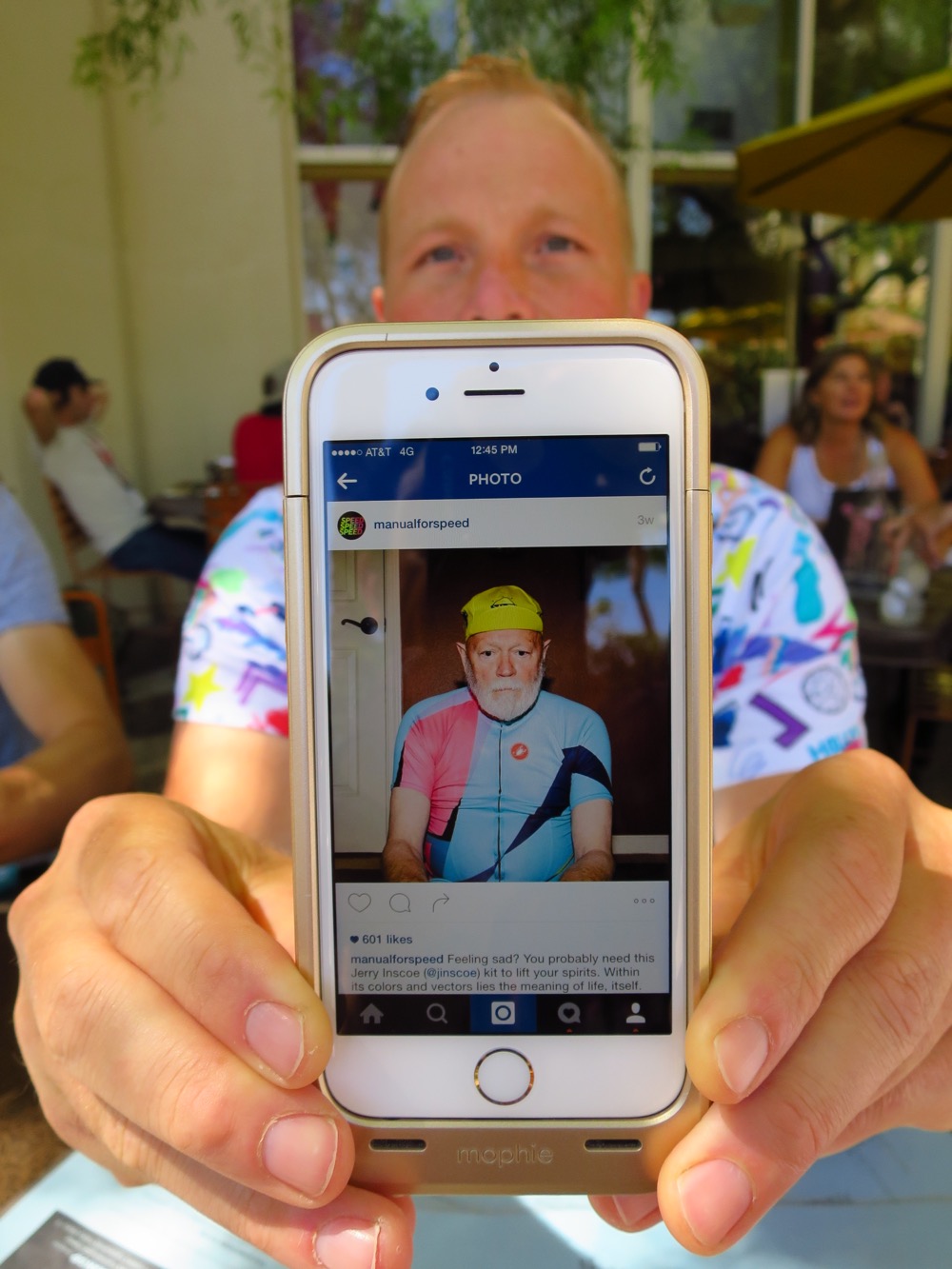 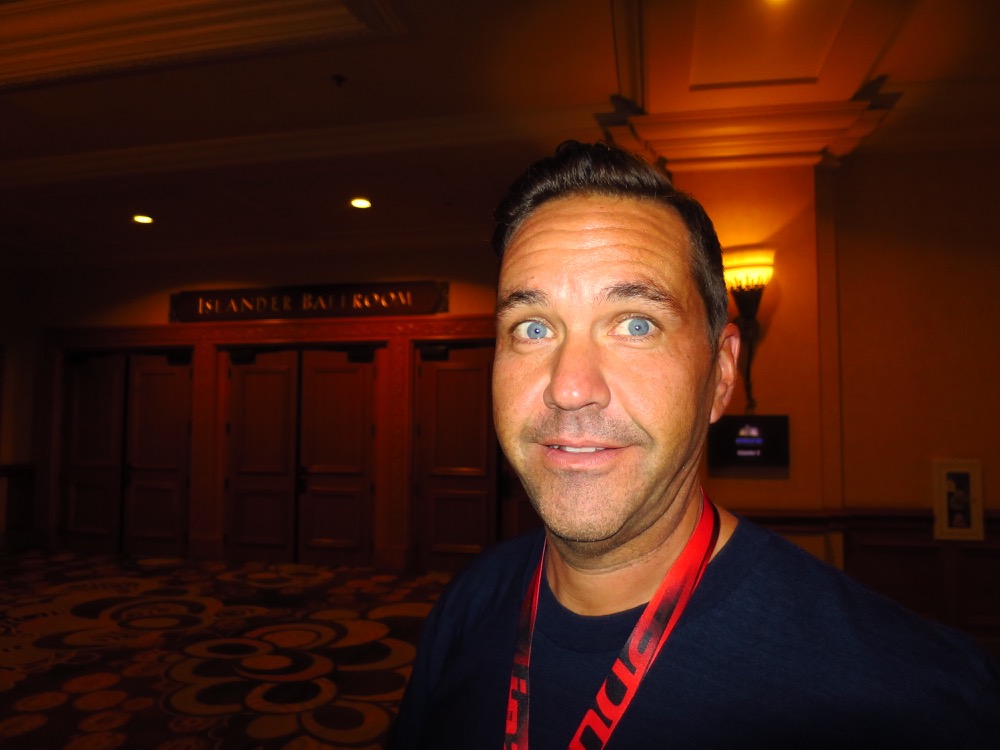 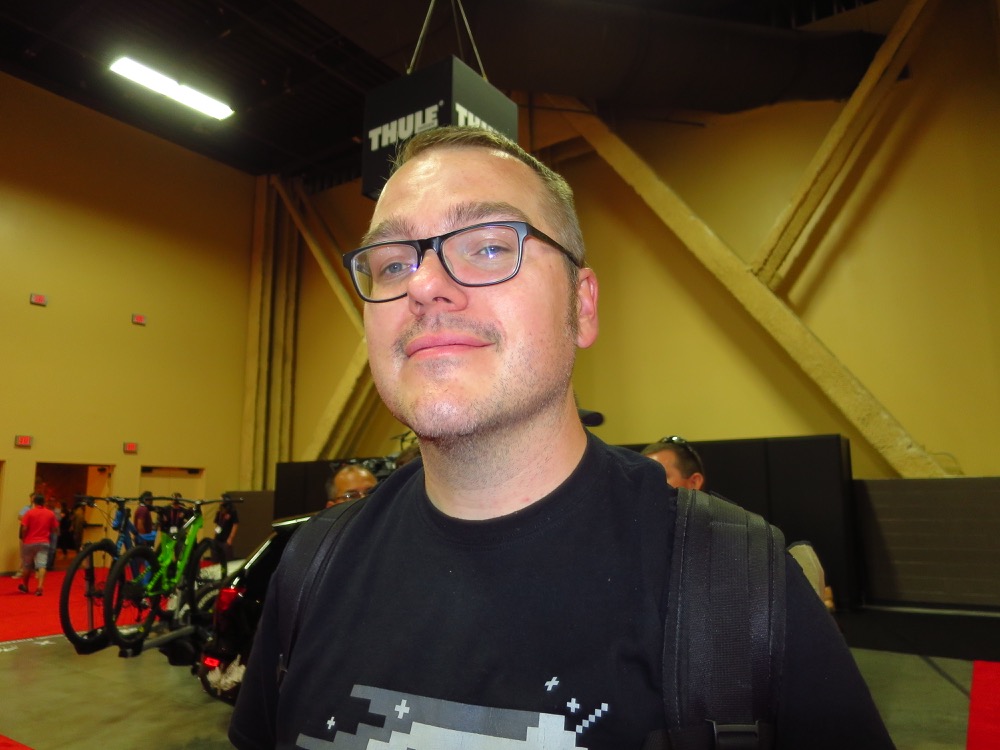 That up there is Michael. He’s the fella who designed the new AHTBM jersey which should be made available here real soon. We had a conversation about it and everything, and if that doesn’t make it etched in stone/written in blood, I don’t know what would. 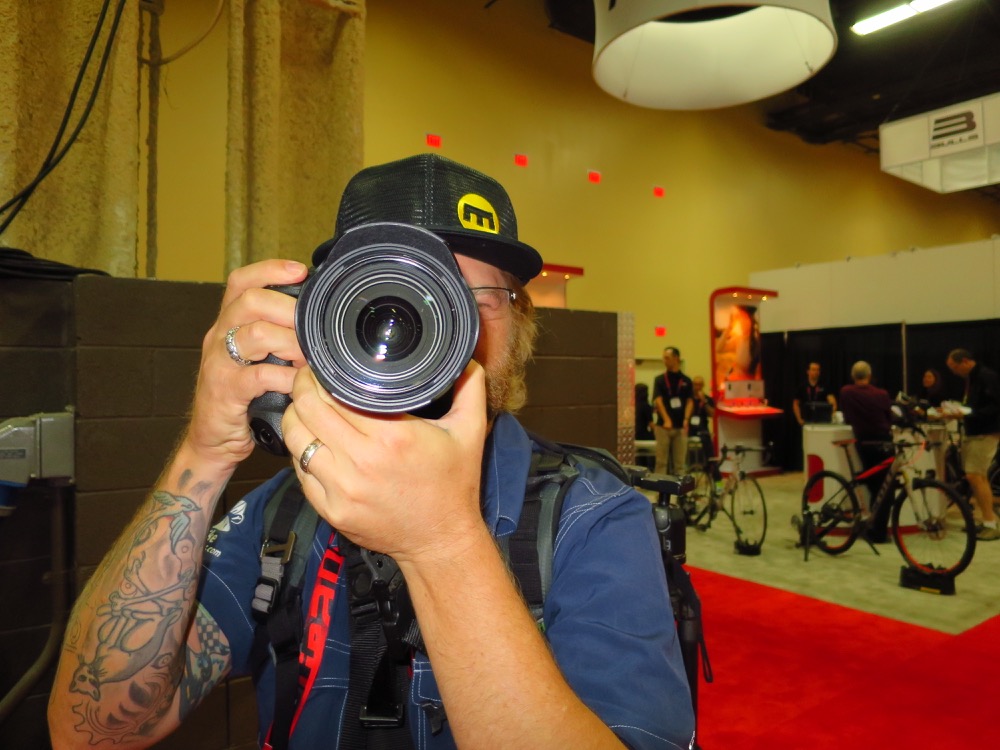 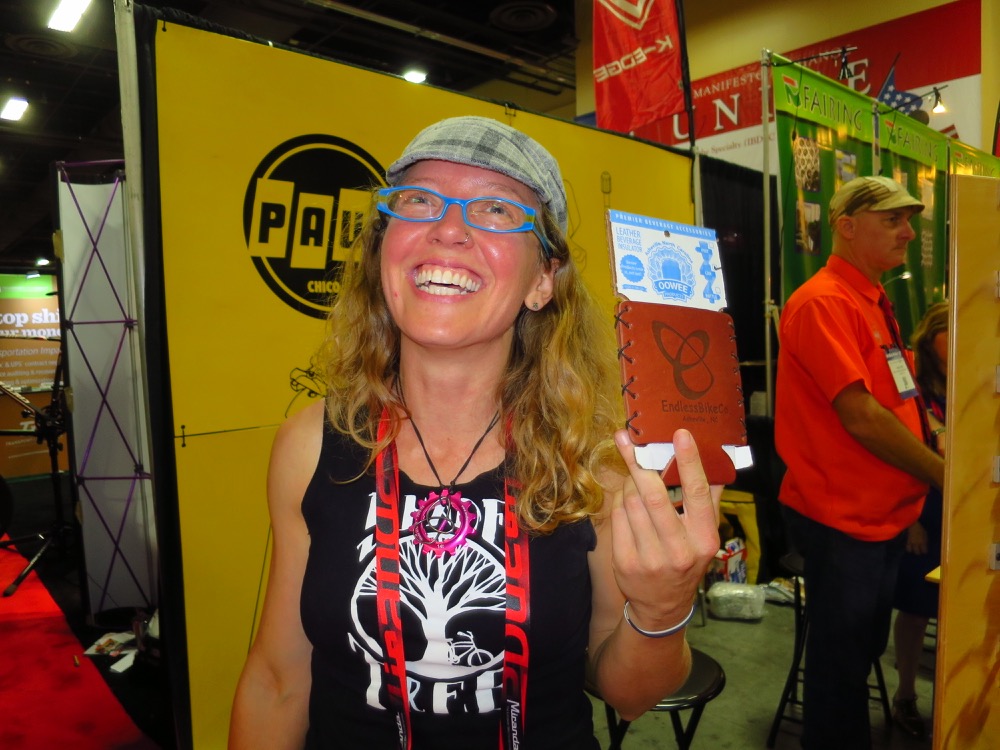 This here is the Endless Bike Girl, and she very graciously presented me with this küzie there in her hand. The deal with these is pretty neat. She gets them made by a company called Oowee Products in Asheville who has partnered with the Autism Society of North Carolina who employs adults on the Autism spectrum.

Clearly I have an allegiance when it comes to which cüzies I use, but in this instance I made an exception.

From there, we continued on; 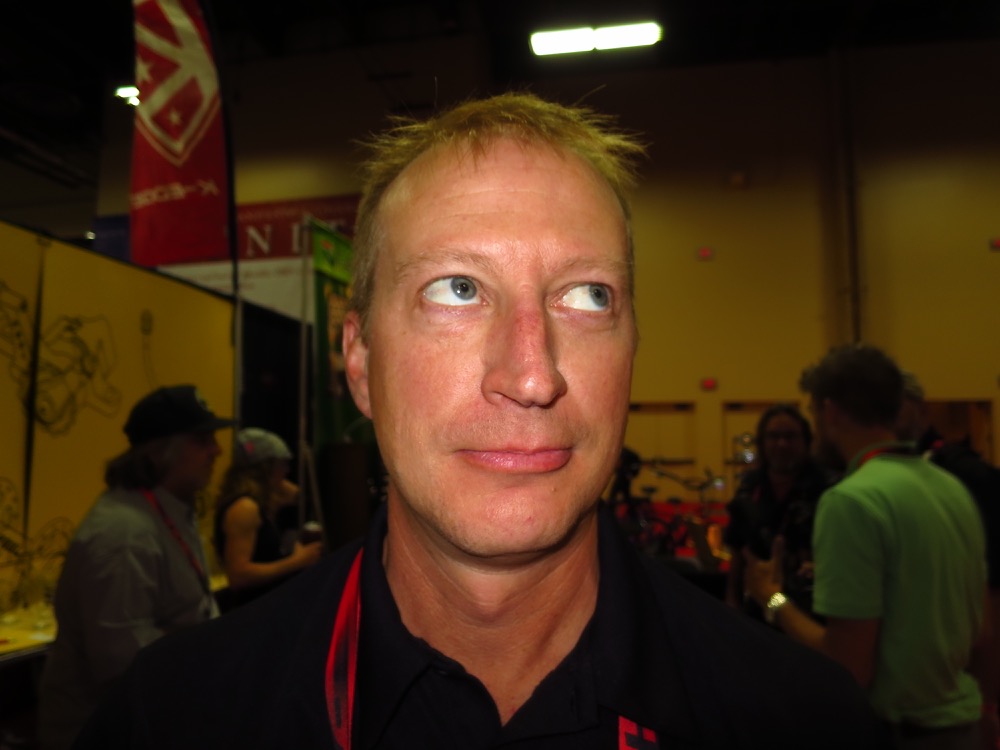 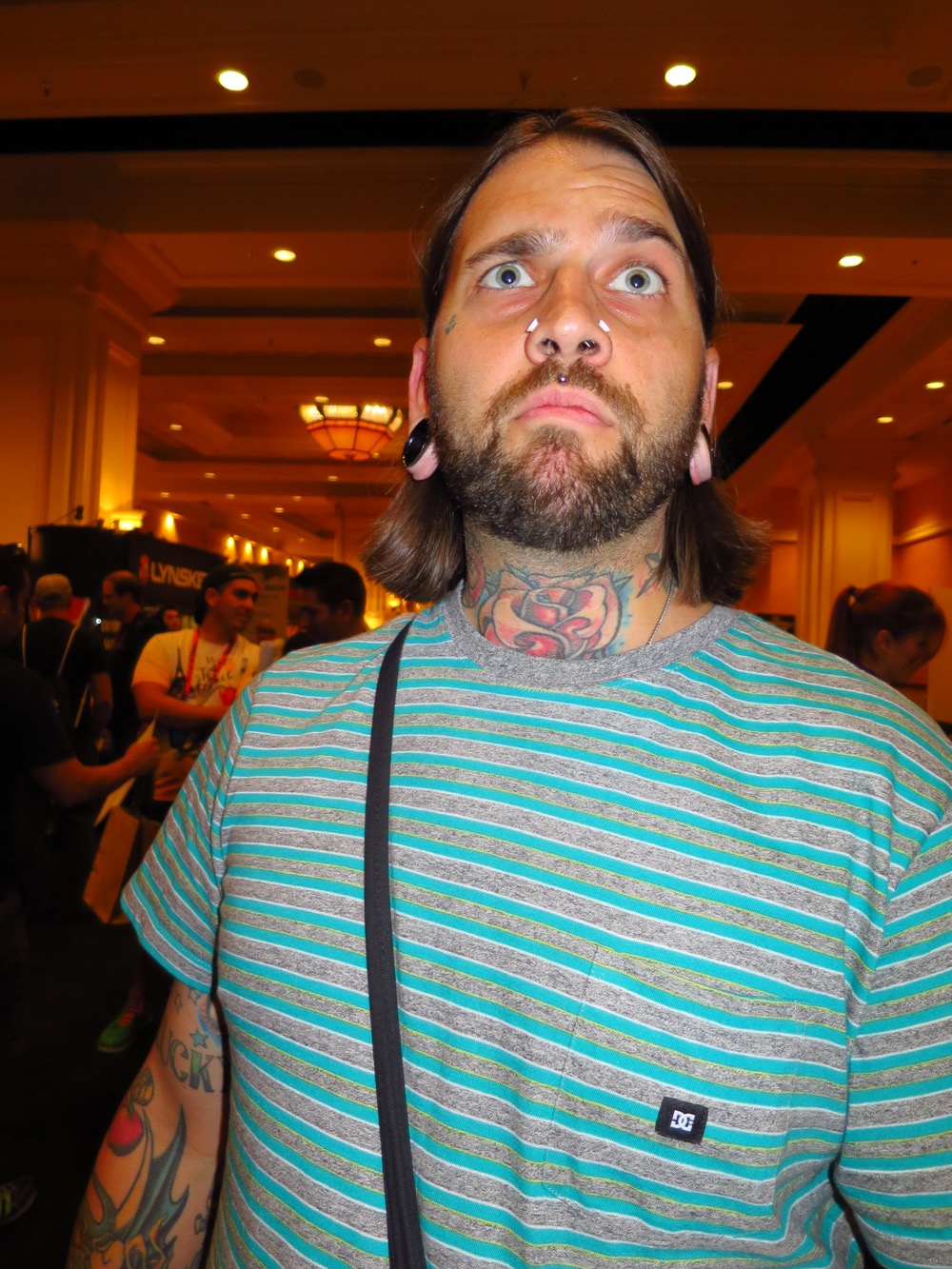 Now, this cat’s name is Tanner, and we’ve known each other for a while. I think we may have met at the exact moment he pummeled a fella for talking shit to his wife. So from that point forward we’ve been friends, and I made a point to never talk shit to his wife.

Anyway, he’s a smart bloke who all by himself has developed a new line of cable actuated bike stoppers; 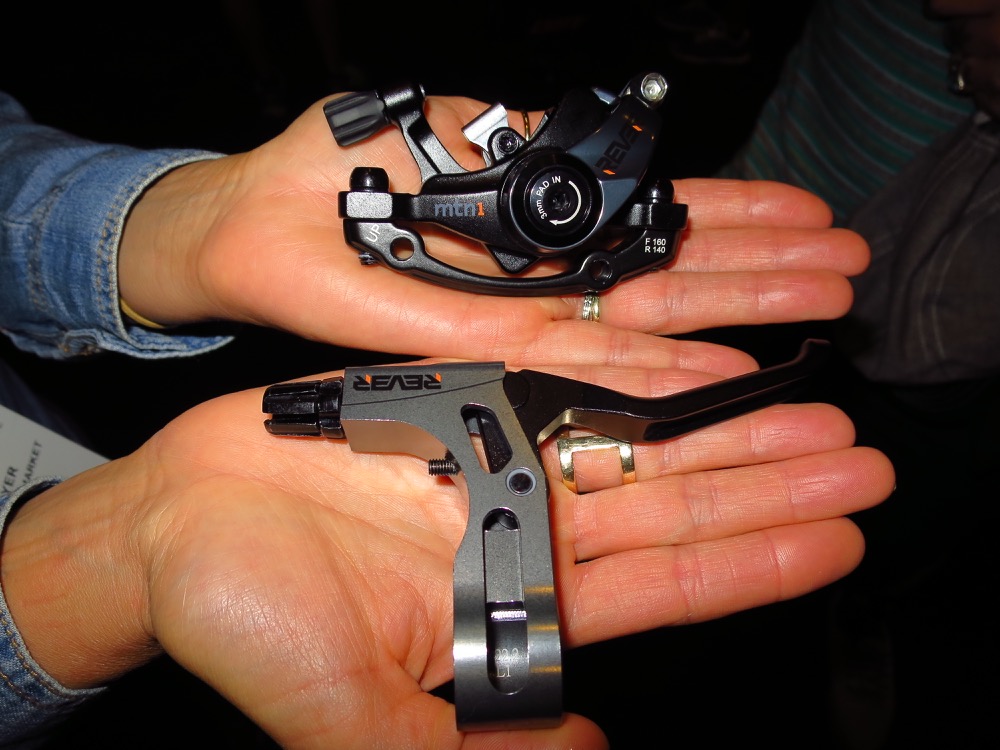 Naturally, when doing something like this you have to navigate all of the patents that the big companies have established, usually resulting in a product that sucks. Based on the interest of both the big companies, as well as established bike manufacturers, we’re going to be hearing a good bit about Rever in the coming year.

Tanner mentioned that he would get a sample of these into my hands at some point for like, a real live product review so keep your eye ball balls peeled here. He’s got a hydraulic brake in the pipe as well, so there are both imminently good things, as well as the potential for lots of stopping afoot for all of us.

This was just about the end of day one. Everyone was all a twitter about going to Cross Vegas, which I was not, so for a while, Demonika, this guy, and I did this; 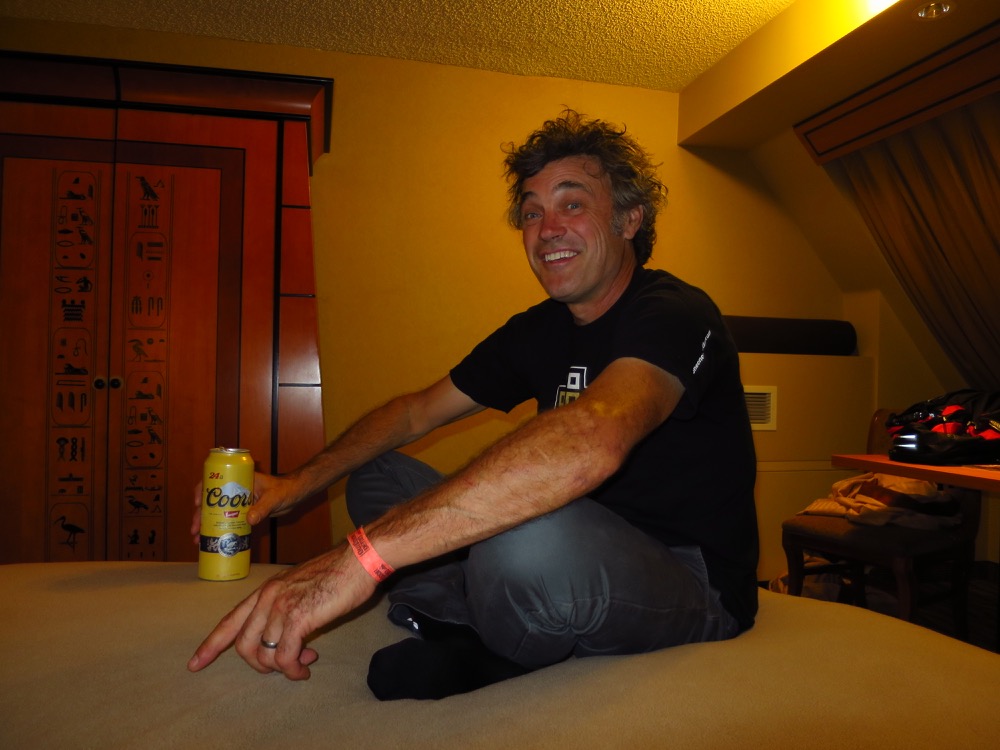 Eventually we got hungry so we decided to see if we could find a place that would serve us breakfast. Strangely, that was easier said than done. Along the way, we bumped into a former compatriot at Bianchi named Juan, and he joined us in the hunt.

Coming up with nothing, we finally settled on finding a place for dinner that served dinner, where we got our fill.

Post-food we took off to see if any Cross Vegasers had returned when we ran into a fella named Rod who has long been the president of Bianchi USA. It was late, he was carrying a briefcase, and said he needed a drink. We pulled off into some bar or another and there we sat with Demonika as a witness. At the very minimum it’s been a decade since the four of us have been together, and the reunion was sweet. Juan wasn’t stressed out about wearing his multitude of sales hats, Rod wasn’t stressed out about wearing his multitude of presidential hats, and neither of them were stressed out about whether GenO and I would successfully return home with what most likely was over a half a million dollars worth of bikes and hardware.

We just sat and enjoyed each other’s company as bike nerds and people who are maybe even a little bit surprised at the fact that after so much time, we’re still in one another’s lives.

The hour grew later and later and we finally pulled the rip chord.

After all, I had a bunch of post-it notes I had to pay attention to the next day; 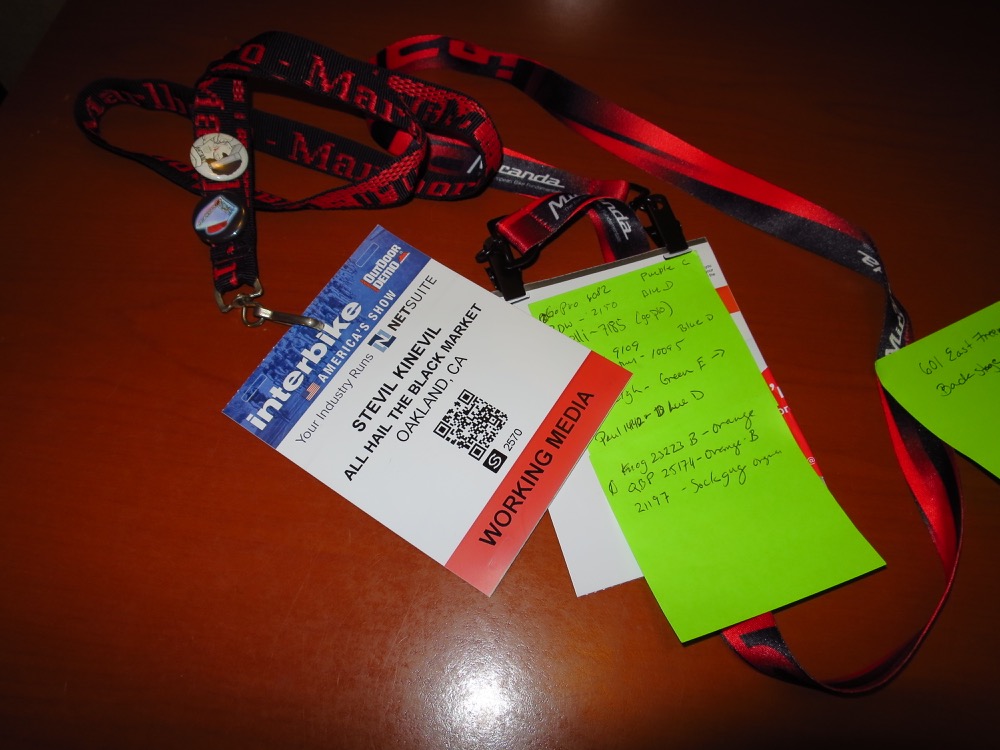 And there was something about an Underbike party that had to be addressed.

The strain upon my shoulders was light, but that on my neck was about to get a whole lot greater.

Tune in on Wednesday for the conclusion of whatever it is we’ve started here. I promise it’s better than today.