I’ve decided that even lowly bike blog douchebags (same diff) are deserving of a little bit of time off, so before we get into today’s meat that matters, I’ll announce that I’m going to take the holidays to rest up, and lick my wounds for a bit in order to recharge and get back to cracking with renewed vigor on Monday the 28th. At that time I’ll have a post and then take another couple days off because everybody will be too busy opening presents and wearing lampshades on their heads to pick up what I’m laying down here anyway.

So with that being said, let’s start at the beginning.

It was about a week and a half ago when I posted the following announcement that Benjamin from Seattle’s Back Alley Bike Repair was preparing to get this little bit of mayhem kicked off; 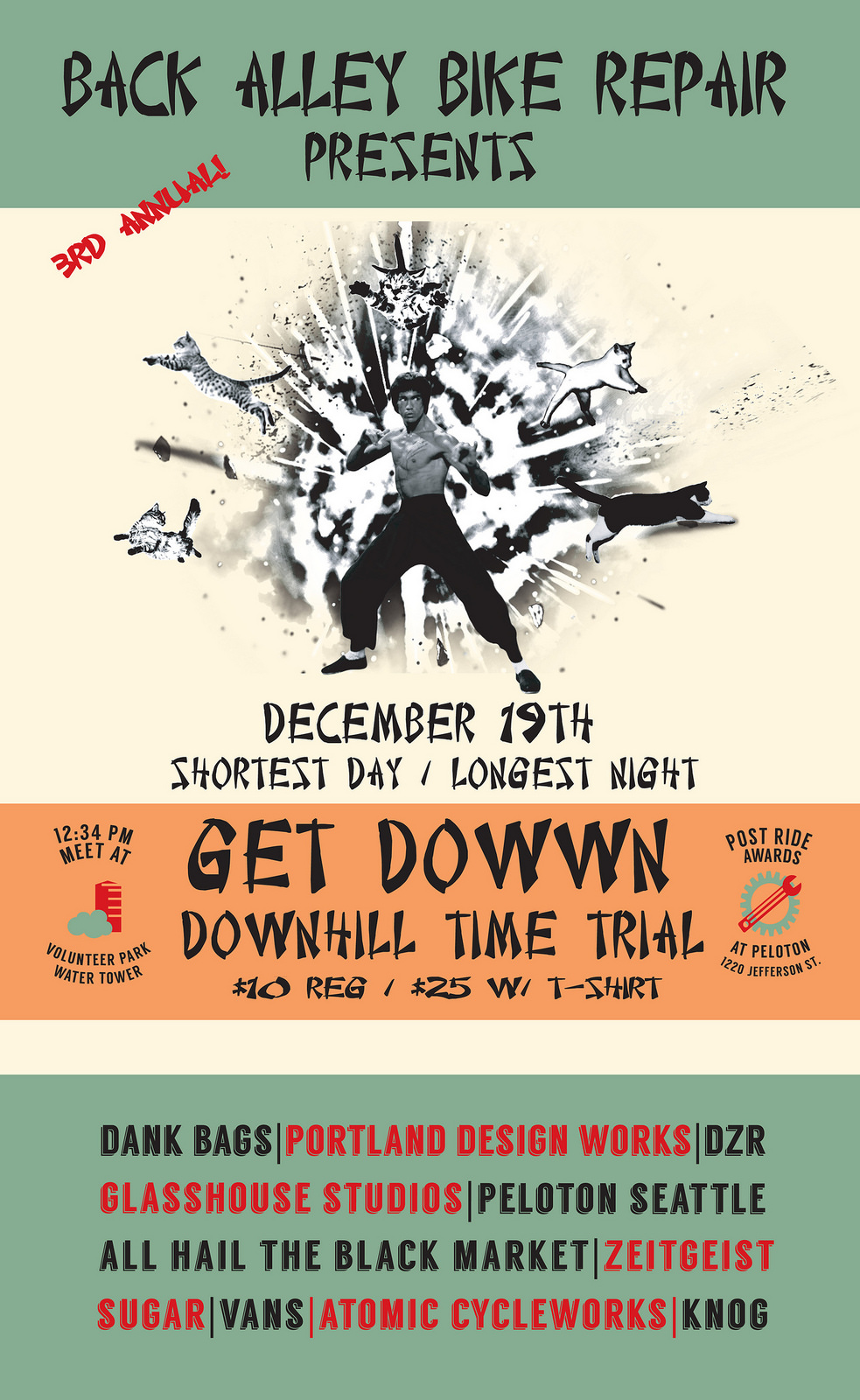 And off he did kick it.

Luckily for us, he penned a little synopsis of the gig that reads like so;

The Get Down was sooo good. Conditions were purrfect- rainy all week, bluebird skies day of. So good that I had a tiny inner tremble of “what if too many folkers come and blow this thing up?” After all, the routes I’d pulled down aren’t designated MTB trails- just some old foot trails, chutes, gullies, hobo encampment access trails, etc. We pegged it at 50 riders would be too much. We got 43 plus 10 volunteers. Spot the fuck on; 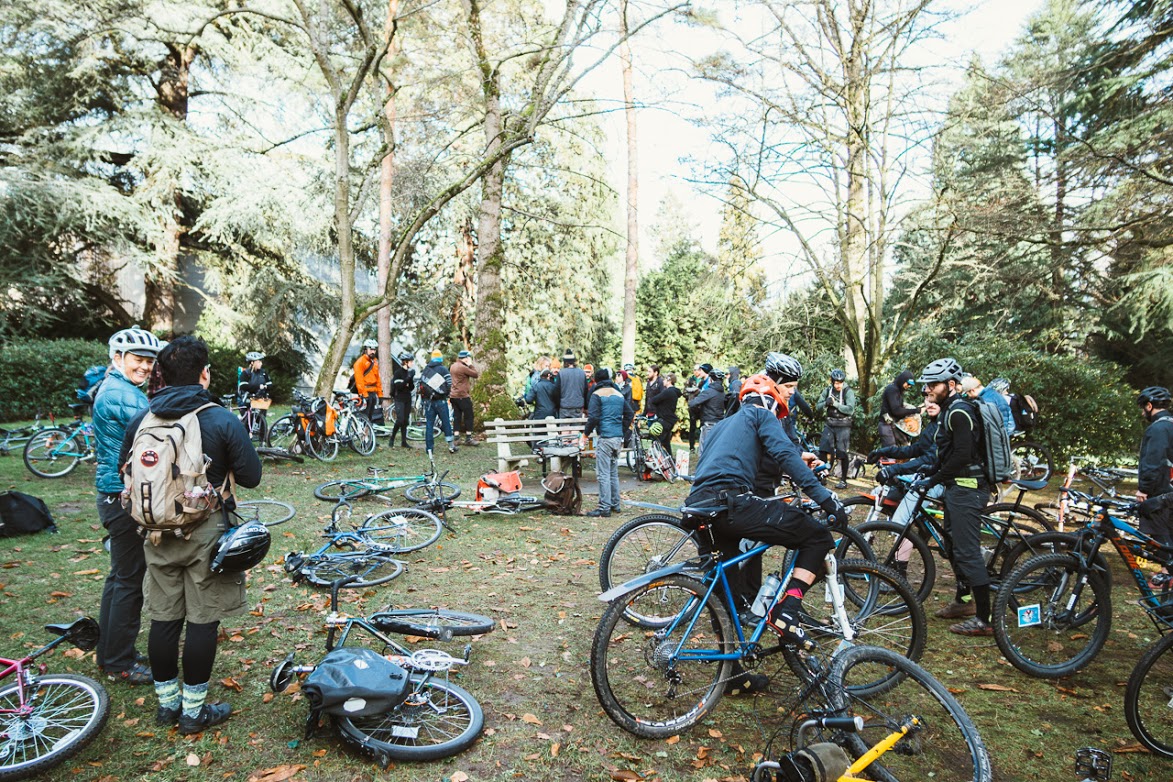 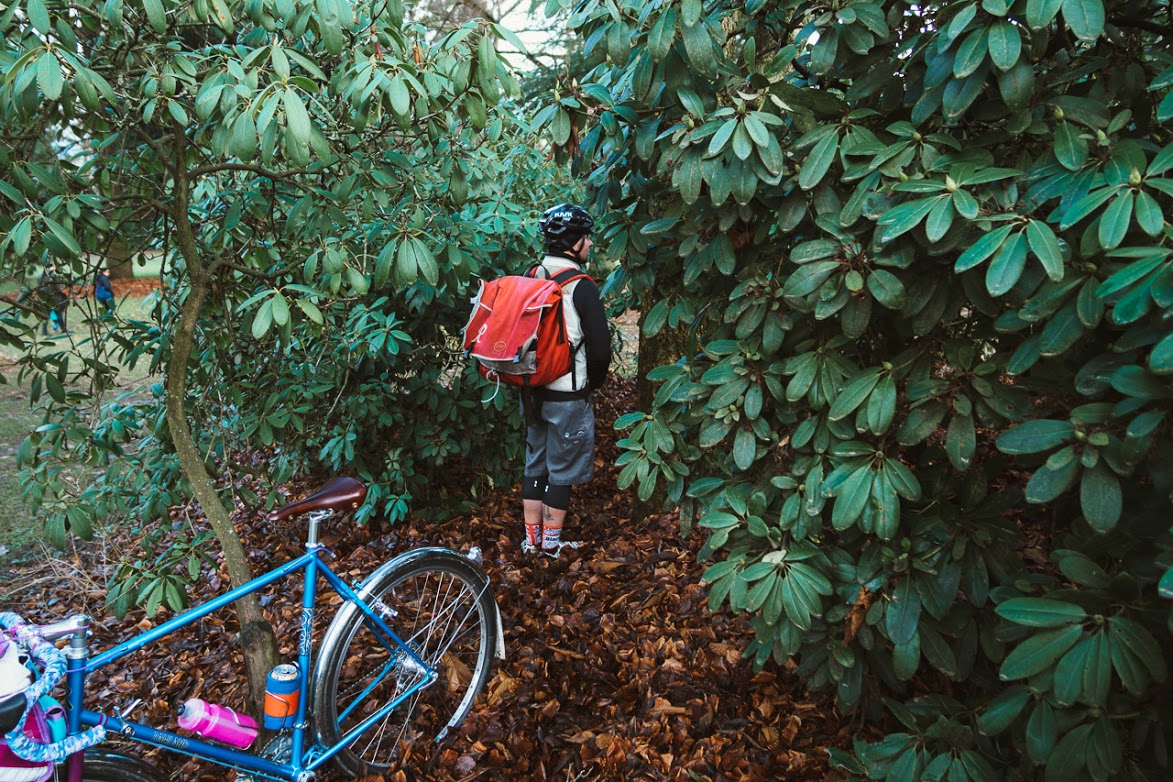 I knew these routes, been crushing them for the past few weeks. Maj Gen Homeboy ExMess and Deadbaby VIP Colin Northcraft had gone thru the most primitive of the routes last week and donned the Agent Orange vest and boots, removed several downed trees, and “armored” the clay section with sideways limbs. Dialed it.

My crew rolled up to the start, and 25 braaap’ers were already there all hippy like- grassy knoll, sunny faces, bikes, getting glassy-eyed. Beautiful. And all with MTB’s that we just don’t get to see enough of in this here city. Yet. I get a real kick out of seeing familiar faces bringing out their bikes they don’t get to use everyday. Full boing sleds, rigid vintages, dirt jumpers, silly speeds, derp bar adventure bikes, commuters, and cx’s. Like the Adams Family or some shit; 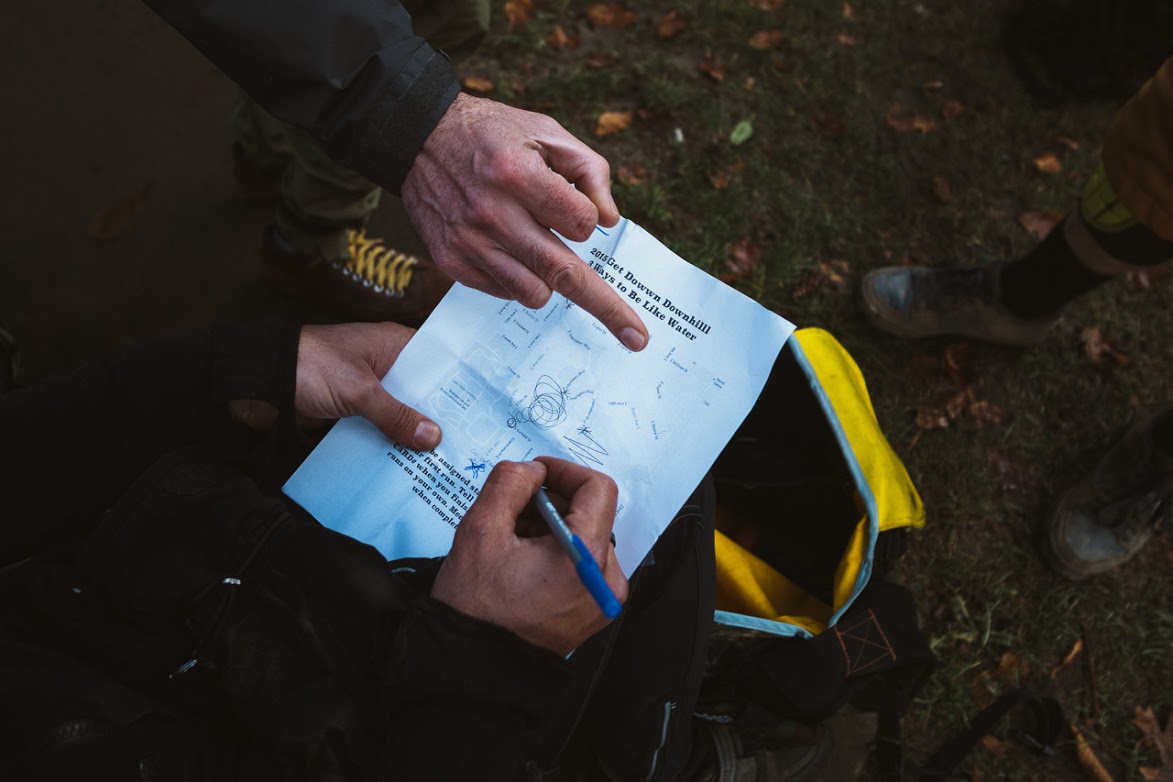 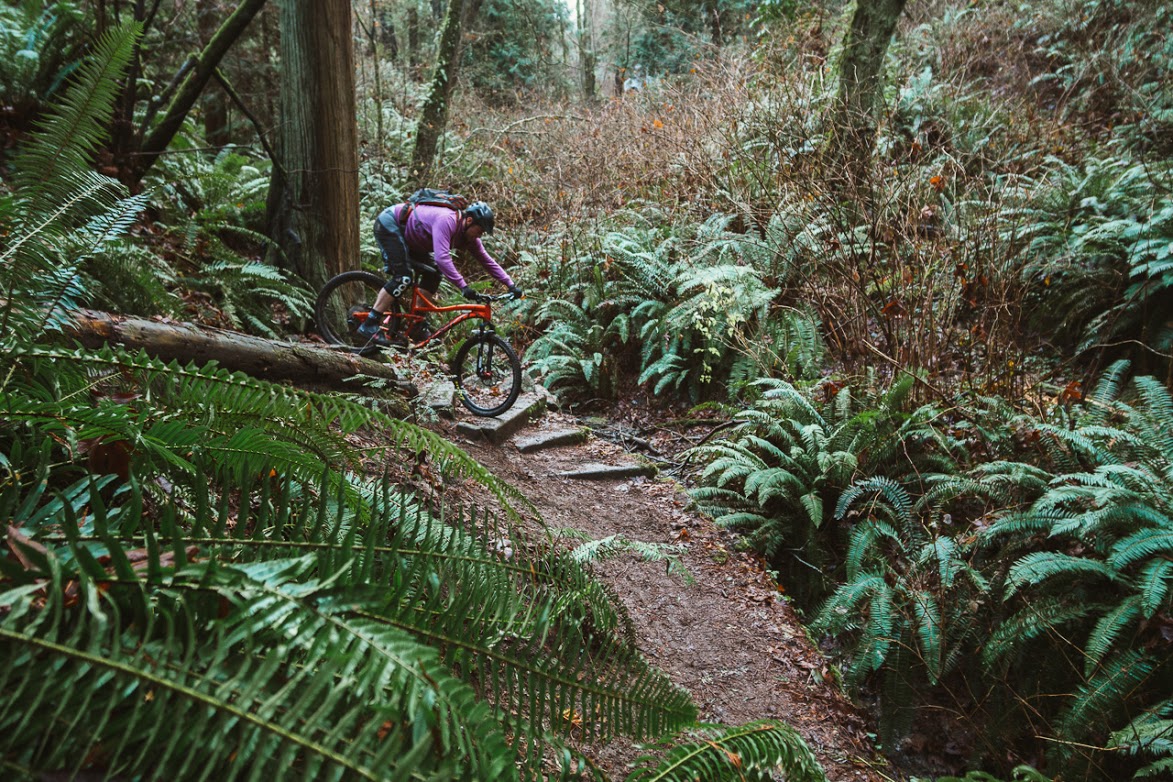 Folks kept coming and we soon had our critical mass. A terse lecturing at from The Me (format/don’t be a dick), and with that we set off. Folks broke off into the assigned starting spots, got a start time, and blast off. With riders simultaneously on 3 routes, all within the same park area, we were trying to button up the event from last years sprawling affair. Whereas the previous outings were alley rally/bum trails/on-street routes, this year was 100% singletrak-ish; 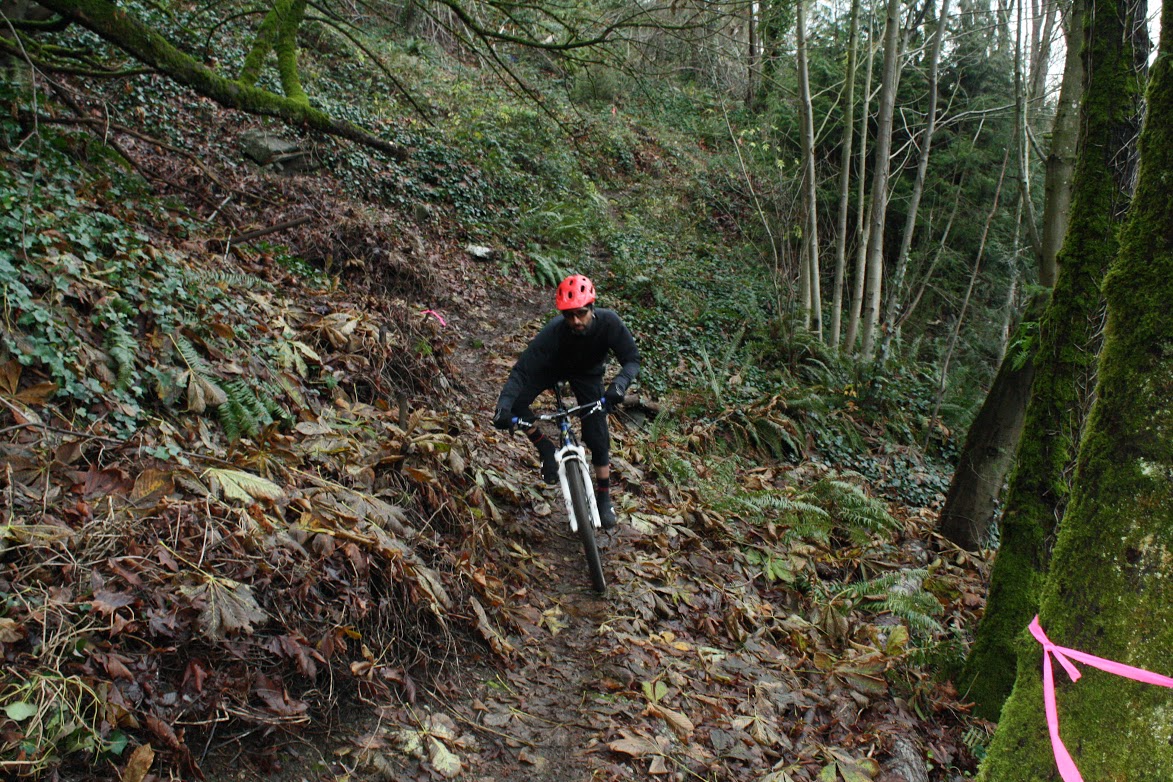 I’m tickled by the feedback. “Can’t wait till next year.” “The best.” “So rad!” “I never knew this was here.” That last one is my fav. Cuz it’s central to why I do this. Folks be on their bikes all the time, riding all over the place. I want to share some of my favorite places in this otherwise beautiful city, take people behind the scenes, find them spots where we can post up and nobody knows we’re there. Of course that’s not always possible, in which case we should just cut a laser thru there and be on our merry way. No offense people, just bikes ruining it for everyone, again.

Thanks for the support. Hope you’re doing okay. That cut looks like it has a mind of its own.

Why, I do believe that Benjamin’s baby has the potential to become the west coast’s own version of The Homie Fall Fest, and assuming I’m not completely crippled this same time next year, it might serve me well to try and attend.

Another thing I would like to see with my own eyeball balls is this little slice of nowhere that Cranpa from FBM just visited;

Red curb, and then some;

I replied with something along the lines of “oh, what the hell, man?” to which he elaborated like so;

It’s like dozens of acres with sculptures in the woods. I think he did something outrageous like invented the bottle cap system for Gatorade as ridiculous as that sounds.

this is like an hour from where he lives as well, and rumor has it he has a crazy bowl at his house a nd a giant metal dragon and the mouth is a fire pit.”

In the news these days all we hear about are corrupt politicians, and hedge fund scam artists, and terrorists, and all of this other mind-numbing bullshit.

When there are cats out there in the world like Tom.

The other morning I awoke from a dream in which I’d been notified that I’d just won 100 million dollars.

Obviously once reality came crashing down around my ears, the disappointment was palpable, because rescue organizations like Sierra Pacific FurBabies were about to get a windfall.

Finally, and in news of the kindness of others, as I mentioned on Monday, the New England fam is very generously circling the wagons for my current plight. Why, Thom ‘Kimbo Slice’ Parsons (you probably want to click here) even went and made a real live flyer for the thing; 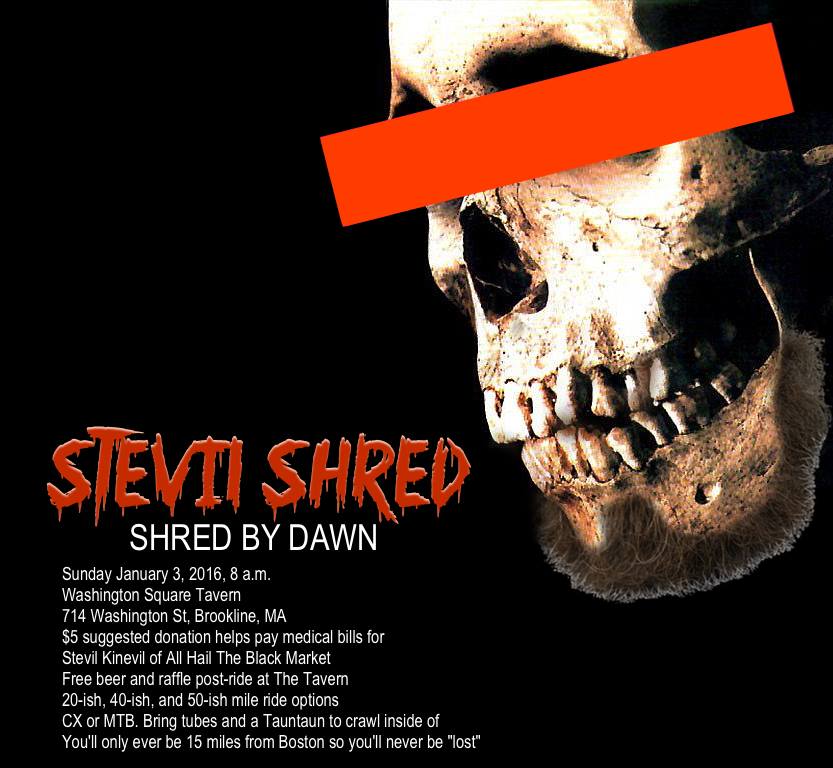 I feel like a heel and totally underserving of the attention. Just for the sake of full disclosure, I have insurance. For that I am super lucky. I suppose what inspired Chip to spearhead the fundraiser was after a discussion we had during which I noted not being sure what the ambulance ride was gonna run me, and that ER co-pays are a motherfucker. I’m not destitute, I’m not tens of thousands of dollars in the hole, and I hope not to give that impression. I hurt myself having fun, and I’m still able to keep my head above water with my job. As I’ve said from the outset, in the big picture I consider myself extraordinarily lucky.

However as we all know, sometimes the universe demands a bit more from us financially than we can handle. That’s why I feel as blessed as I do to be a part of the community that we are, and I can’t thank my friends to the North East for the most generous assist.

So take a red pen, and draw a big inverted cross on the third of January.

I sent both my Zank SSCX drawing as well as a boat load of product out for the raffle, plus there’s gonna be bikes and beer a’plenty. I think it’s gonna be good. Not possessing the power to give yourself a couple of days off to recuperate kind of good, but nearly in the same neighborhood.

3 Responses to “See you later, suckers.”