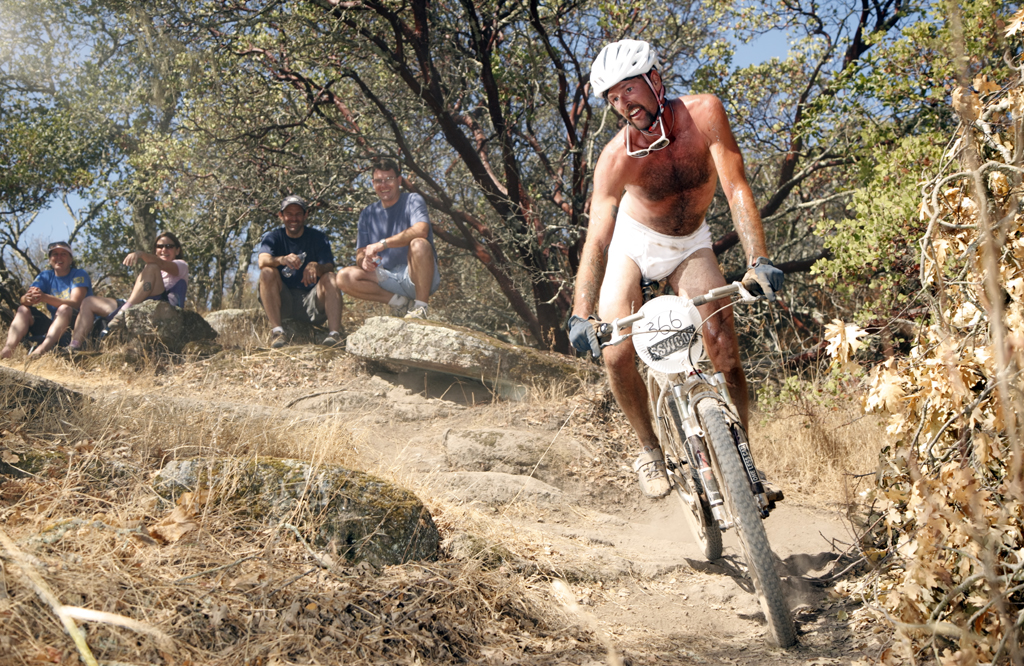 Mostly nothing, and there’s your answer.

Well alright. Let’s make some magic. If you recall, last Friday we did a ‘pert fair recap of this most recent SSCXWC, or if you’re Adam Craig, the SSCWXC, but thankfully Kona Bikecycles came through with a real barn burner of a video piece;

Bless the black hearts of both Kona, Spencer Paxson and Dale Plant for making that clip be.

As time goes by, and with chunks of content that literally fall into my lap, it becomes easier to never leave my house. I’ve never exhibited signs of Agoraphobia, but I don’t see why I shouldn’t begin trying.

Relating to this only a little, Brad (previously of Urban Velo), and currently of The Quartuccio Instagram Empire did a very generous thing and forwarded some photos and words detailing last weekend’s ‘Dirty Dozen’. For those who don’t know, the Dirty Dozen is a bike ride in Pittsburgh that winds up the city’s steepest hills. It sounds horrible, and since it involves going outside, I’m sure I wouldn’t like it.

Pittsburgh is an old city built on top of endless valleys and hills, and features some real gut buster climbs if you’re into pedaling up such things. The Dirty Dozen is a renegade race up the thirteen shittiest hills in and around town, most featuring greater than 20% grade and some with the added bonus of Belgian block pavement and auto traffic; 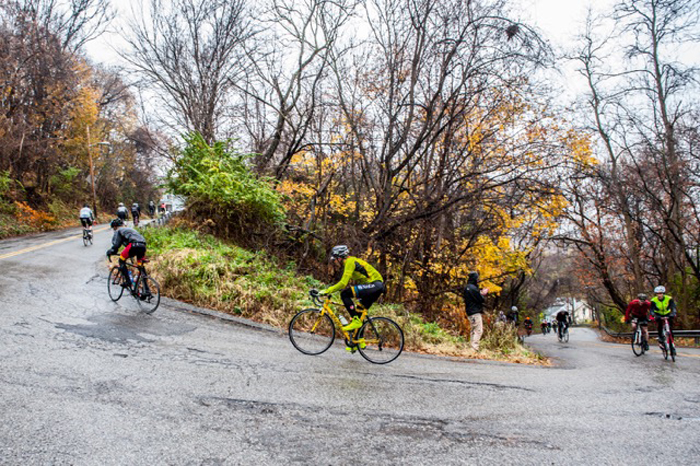 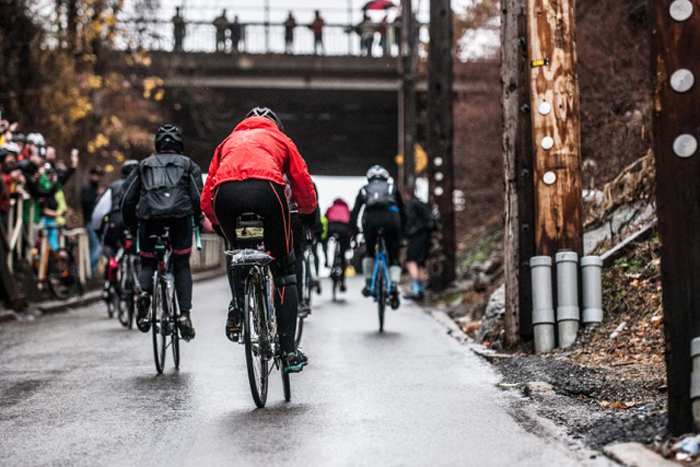 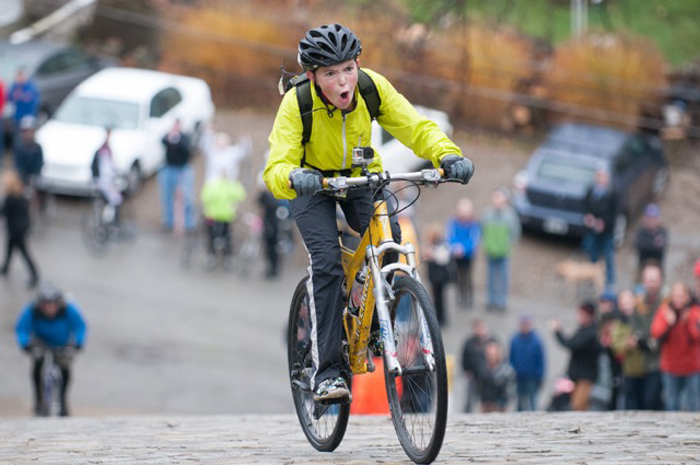 It even goes up the steepest public street in the United States and perhaps the world — the ridiculously steep 37% grade Canton Avenue. The Million Mile Man Danny Chew has been making it happen for more than 30 years, and has turned this tough guy group ride into one of Pittsburgh’s must-do cycling events while keeping it hovering just under the official radar even as it has ballooned to a couple of hundred riders. Not unheard of to spot a flask in the peloton, and only the creator knows what the spectator’s mugs and growlers hold; 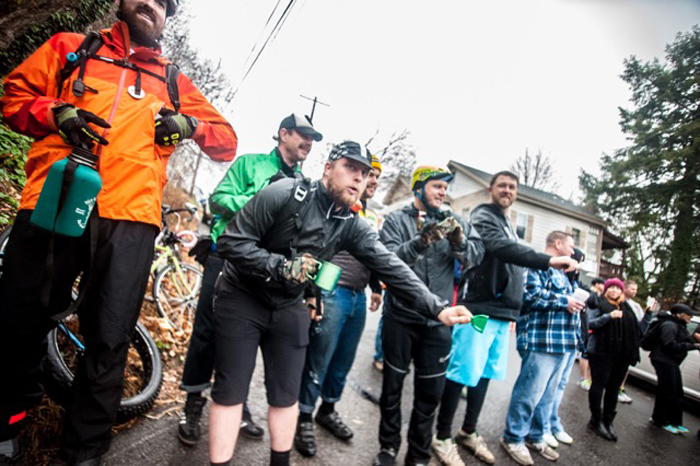 It’s a race, it’s a challenge, it’s a foolish institution that will make you wonder why people built roads like this in the first place.

It looks amazing, and it looks terrible, and I wanna do it, and I hope I never go to Pittsburgh.

That’s how that makes me feel.

In other news, I was recently reading a thing a fella wrote about buying a Portland Design Works bike light from Amazon, experiencing a small issue with its functionality, and then had to monkey around with the gigantic and faceless middleman to deal with warranty stuff. I’m not sure why he wouldn’t just contact the good folks at PDW directly, but whatever. Inspired by his story, I then felt compelled to re-do a little graphic I did a couple of years ago; 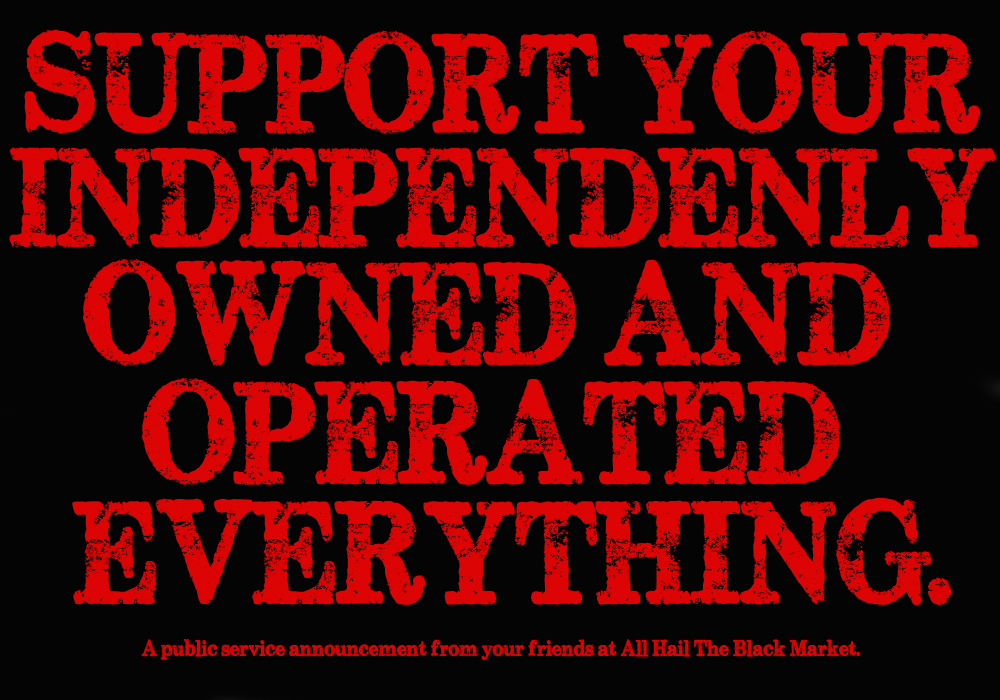 As far as said fella’s situation goes, this of course would include patronizing his LBS, or just simply buying the light from PDW themselves.

I realize that we are all creatures who are committed to convenience. I love convenience, and have long contended that rather than taking the straight line from A to B, would rather just nap until B made it’s way to A. However to an equal degree, I’m committed to the health of independently owned and operated businesses, and as the gift exchanging season draws near, extend the challenge to this here audience to keep their dollars in the pockets of the little guy. In the long run, it benefits all of us to a greater degree.

And not that you would place an order for a whole crap ton of really super nice quality stickers for someone for the holidays, but on the chance that you wanted to promote, um… Like, your egg eating team or something, did you know that Maximo Supremo residents Sticker Robot extended their promotion until the 15th of December. If you order 1,000 stickers, they’ll give you an additional 500 stickers for free. 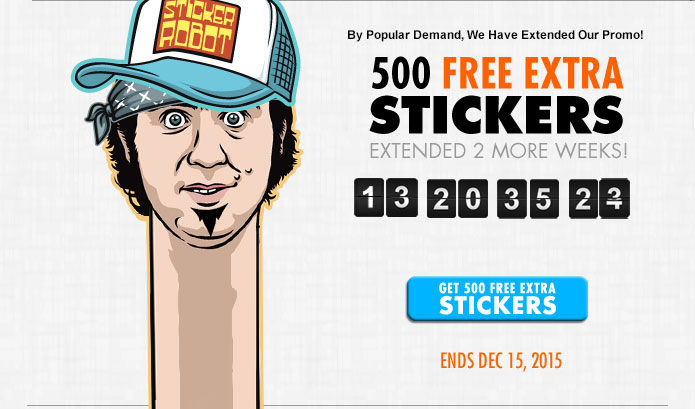 Besides all of the stickers they don’t make for me, they make all of my stickers; 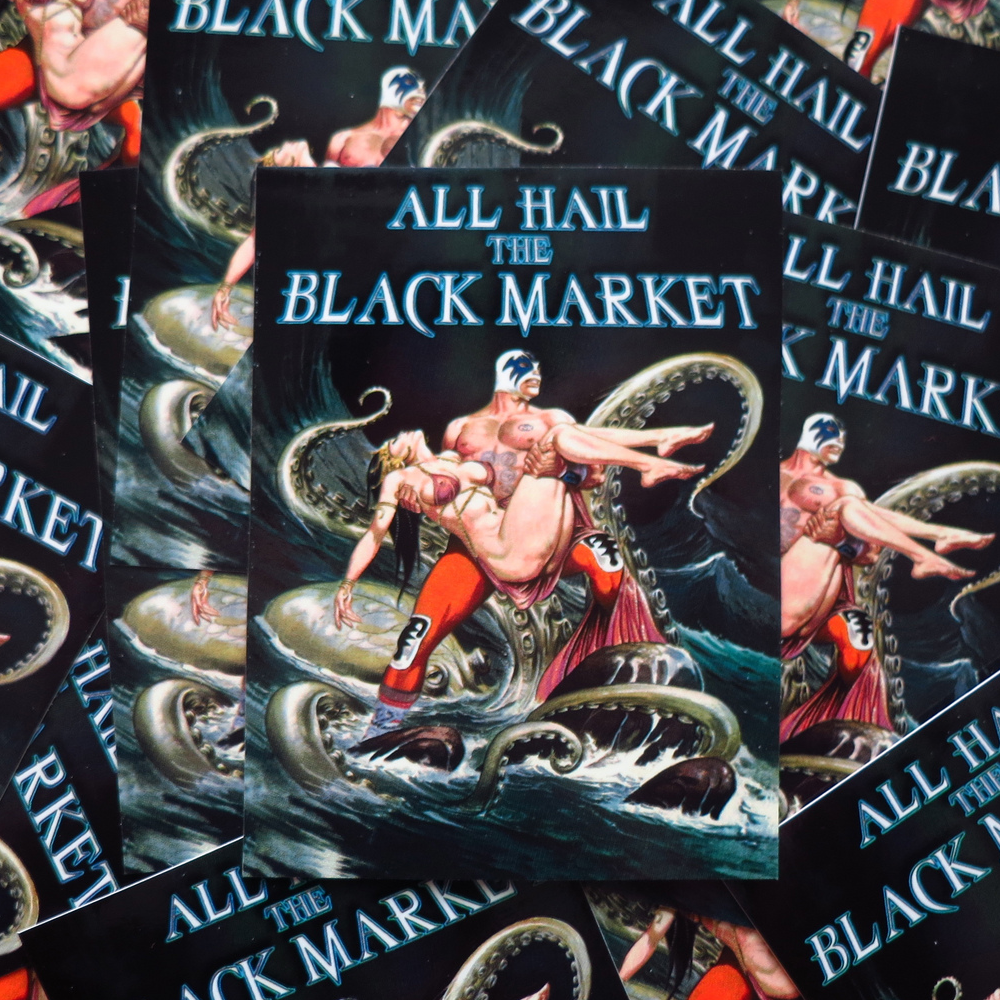 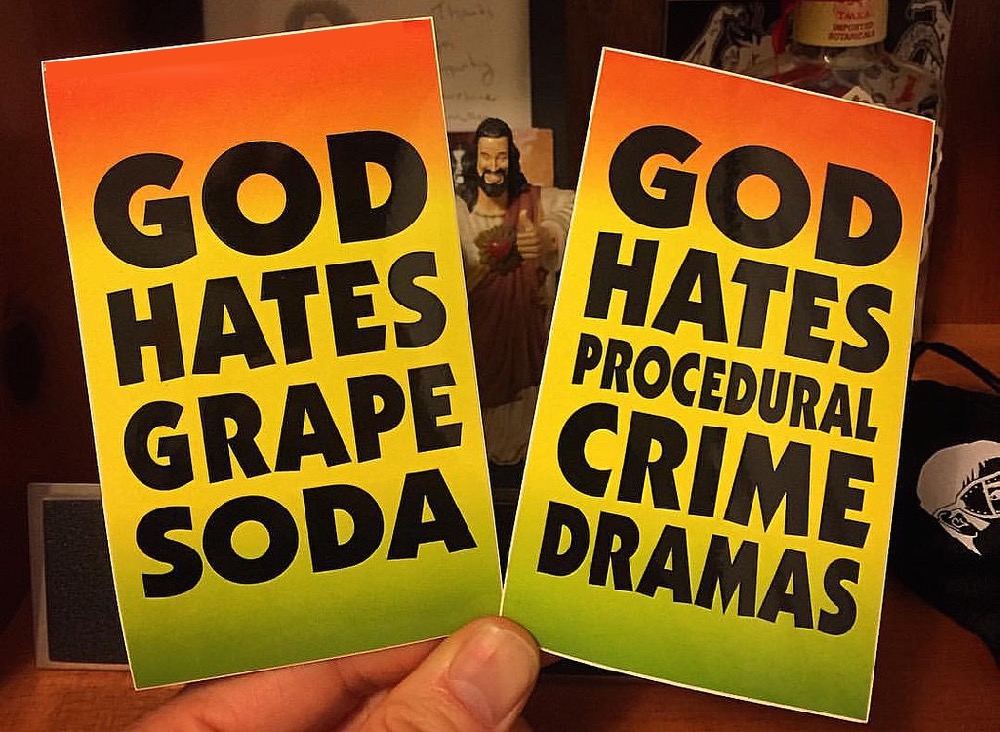 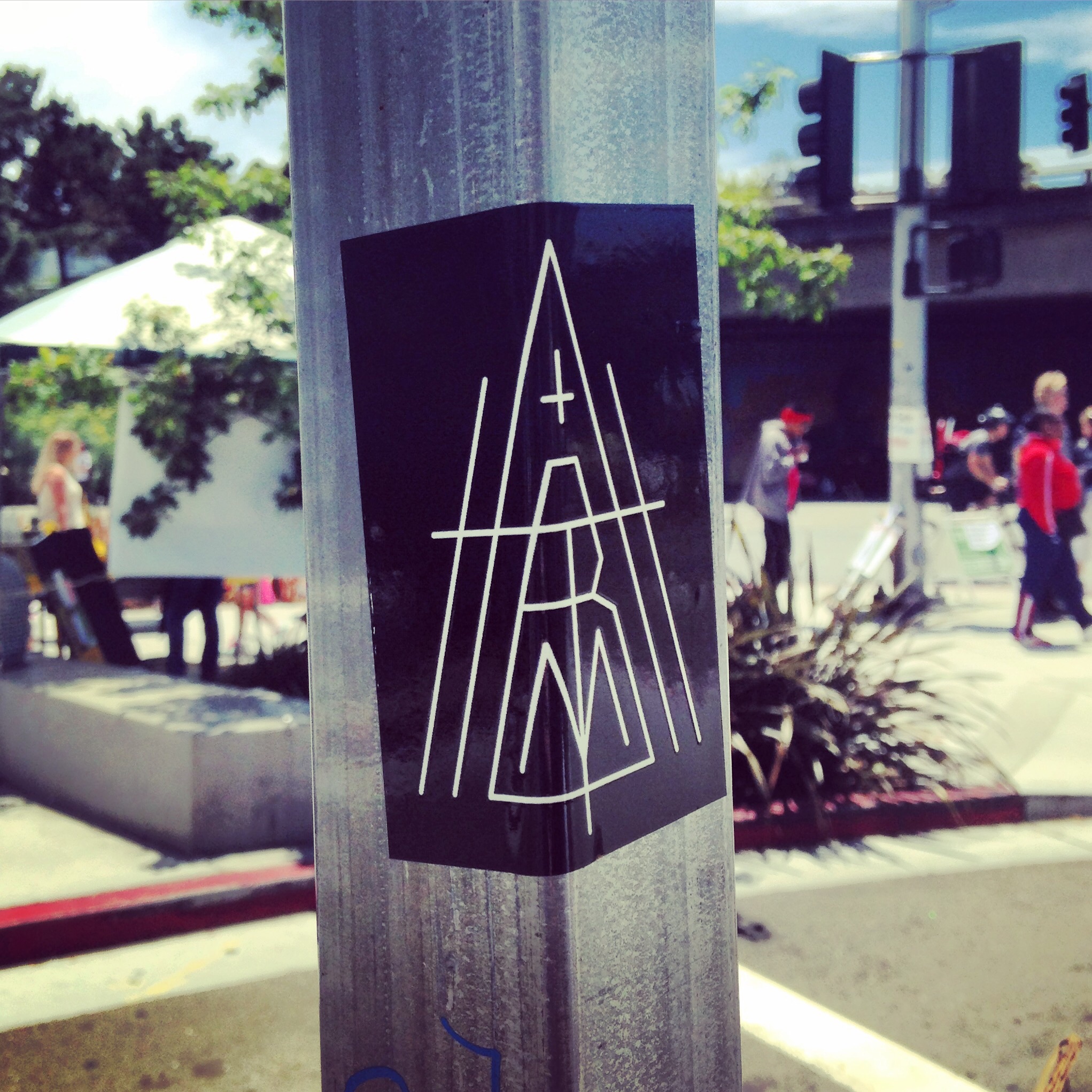 They even made me these, which I don’t carry any longer because I was infringing on ‘trademark law’ or ‘intellectual property’ or some kind of legalese mumbo jumbo like that; Now, because today’s post is feeling a little dude-centric I would like to direct your attention to Issue number 187 of Dirt Rag Magazine; 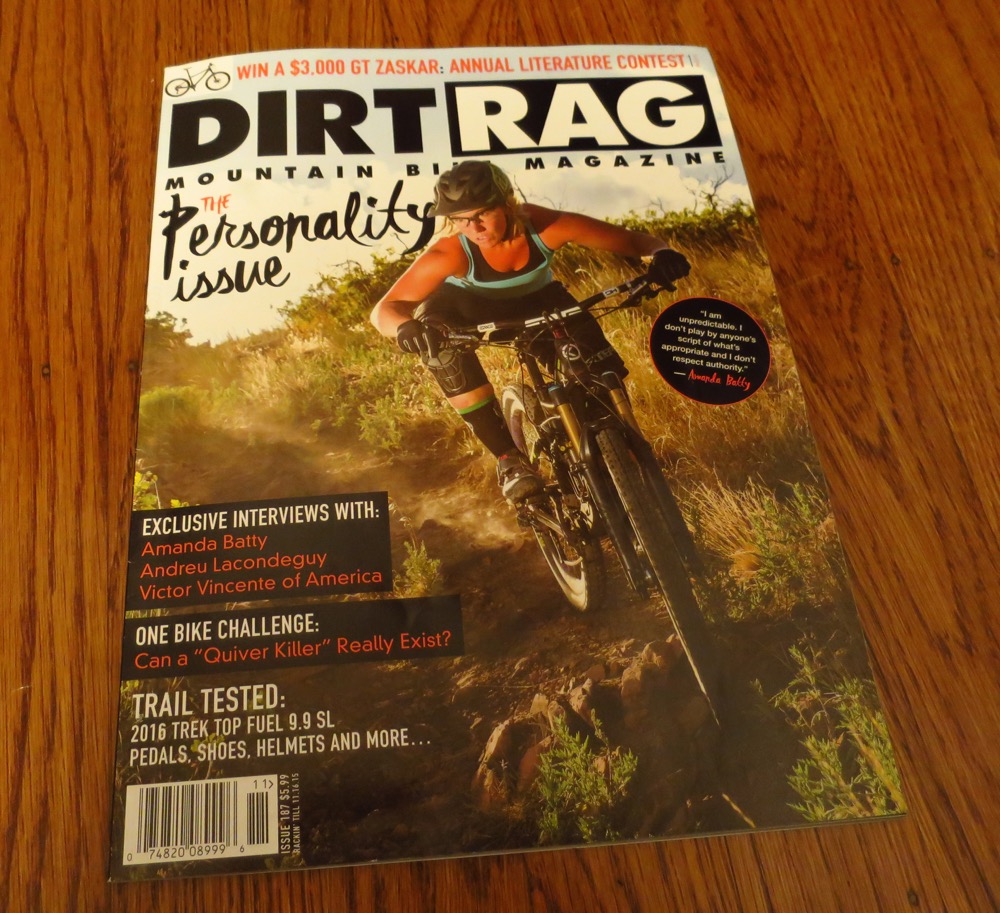 This issue features an interview with a person named Amanda Batty.

She has very quickly become one of my favorite personalities in mountain biking, and it started with this particular spread; 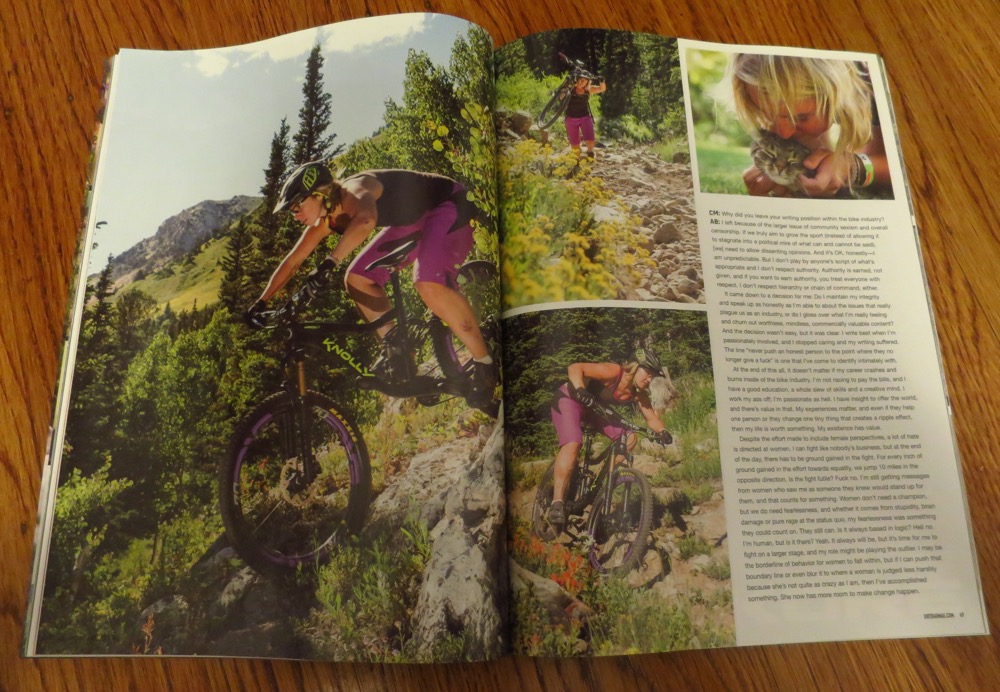 I re-read the interview a few times to see if I could pick one passage out to seal my perspective, but I can’t. The whole thing is one big biting, and concise point.

Being a fan of the wordage, I’ve recently come to learn of the phrase, ‘Do No Harm, But Take No Shit‘, which I hope would be applicable to all of us, but as near as I can tell, Amanda embodies wholly.

I realize I’m a bit late in posting this information, as the newest (#188) issue of the mag is in stands now, but if you can track down a back issue either through your LBS, or Dirt Rag directly, I encourage it. As far as I’m concerned, I’m not going to say she’s what women’s cycling needs, because she’s not. She’s what cycling needs, and I feel hugely fortunate to be in her corner.

Finally, and in closing I offer you an ‘awwwww’ moment rarely seen here within the annals of the Black Market web project;


That right there is my dear old friend WKB out on a dirt shred with his profoundly pinchably-faced young spawn, Bronson.

That image right there is real close to all that needs to be said about why that’s so.