Before we get into the meat of today’s very short, yet powerfully informative post, I would like to notify any and all interested parties that I took delivery of a metric shit-ton of those ‘Drink Beer, Ride Bike, Go Do Monkey Business To Yourself’ shirts yesterday, and have them bagged up and ready to go out; 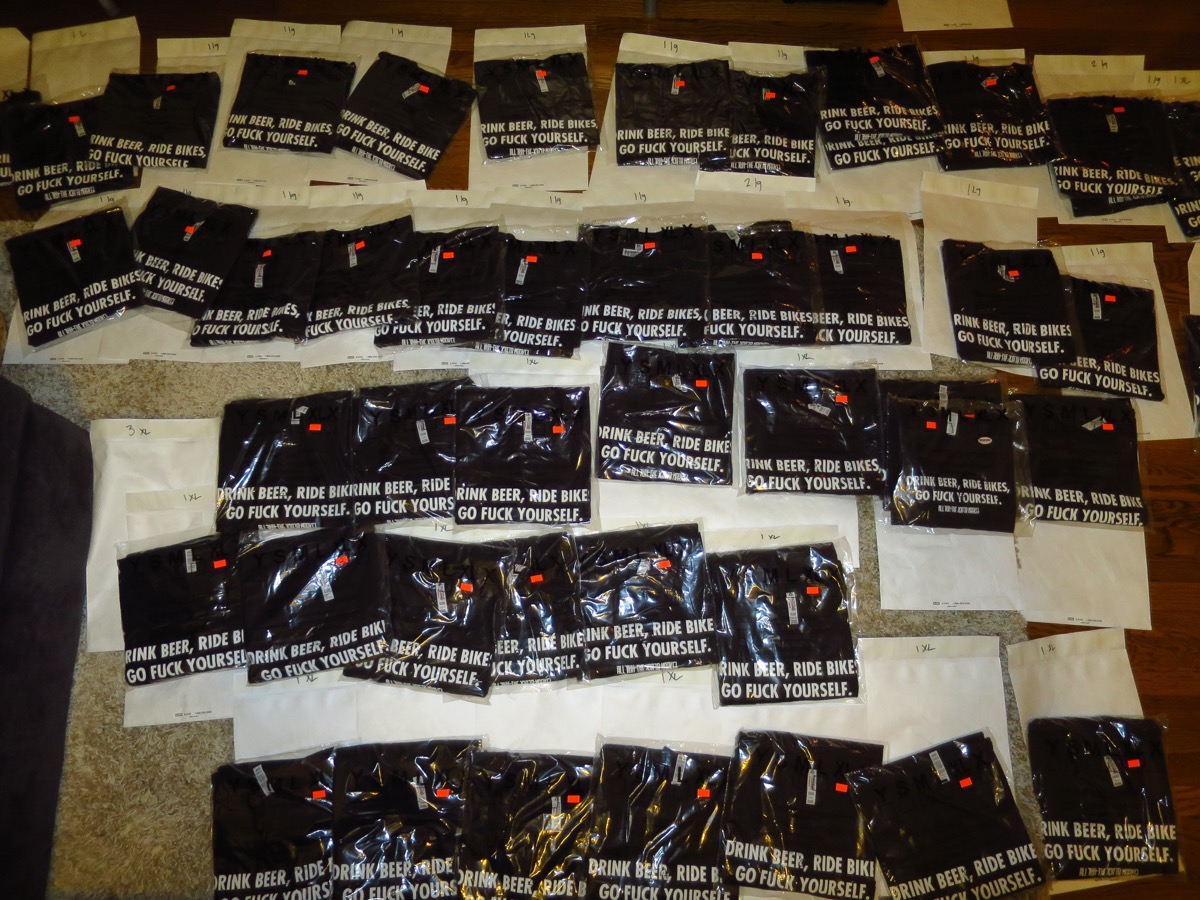 I’d like to apologize for the lag, and thank you for your patience. I can almost promise that they will be worth the wait.

Or at least the look Gramgram gives you when you show up to the Easter barbecue wearing it will be.

Now then- Let’s get down to business.

Philosopher Kedar Joshi once contended that the quality that separated men from beasts was the ability to forgive, but I might add to that, the ability to use power tools.

For as long as I’ve had any semblance of personal work space, I’ve had a hodgepodge of tool benches either reclaimed from the trash, or most recently, reclaimed from what would have ended up being trash; Here is a photo of a bike parked in front of the hodgepodge of which I speak, because I never bothered to get a photo of just the background on its own.

In the two places I had before that I had a table that I’d actually pulled from the trash, and a painting stand I’d stolen from my alma mater, which again, I barely documented; It’s what my old friend Sarah called a ‘works donut’, because it works, don’ it?

Anyway, the other night, Yafro (who some of you might remember from his roles on the hugely popular shows One One One Bicycle Studio, Surly Bicycles, Salsa Cycles, Fox Racing Suspension, among others) mentioned in conversation that he had on many occasions built benches for his parent’s bike shop, and he reckoned he could dip into his big brain and expansive memory and dredge up more or less how they went together.

So the other morning I received an email and a text containing both the plans, and a “what are you doing? Wanna go to the lumberyard?” Being that even on my busiest days, my hands are never too full to decline a trip to a lumberyard, I enthusiastically agreed.

Maybe $130.00, handful of cuts with a circular saw, a few hours, at least three smashed fingers, and a couple splinters later, and I had myself a frame; and eventually a completed work bench; And because I felt badly about losing the sticker archive on the drawer on my old reclaimed P.O.S., I just popped it off and stuck it on with a couple wood screws; 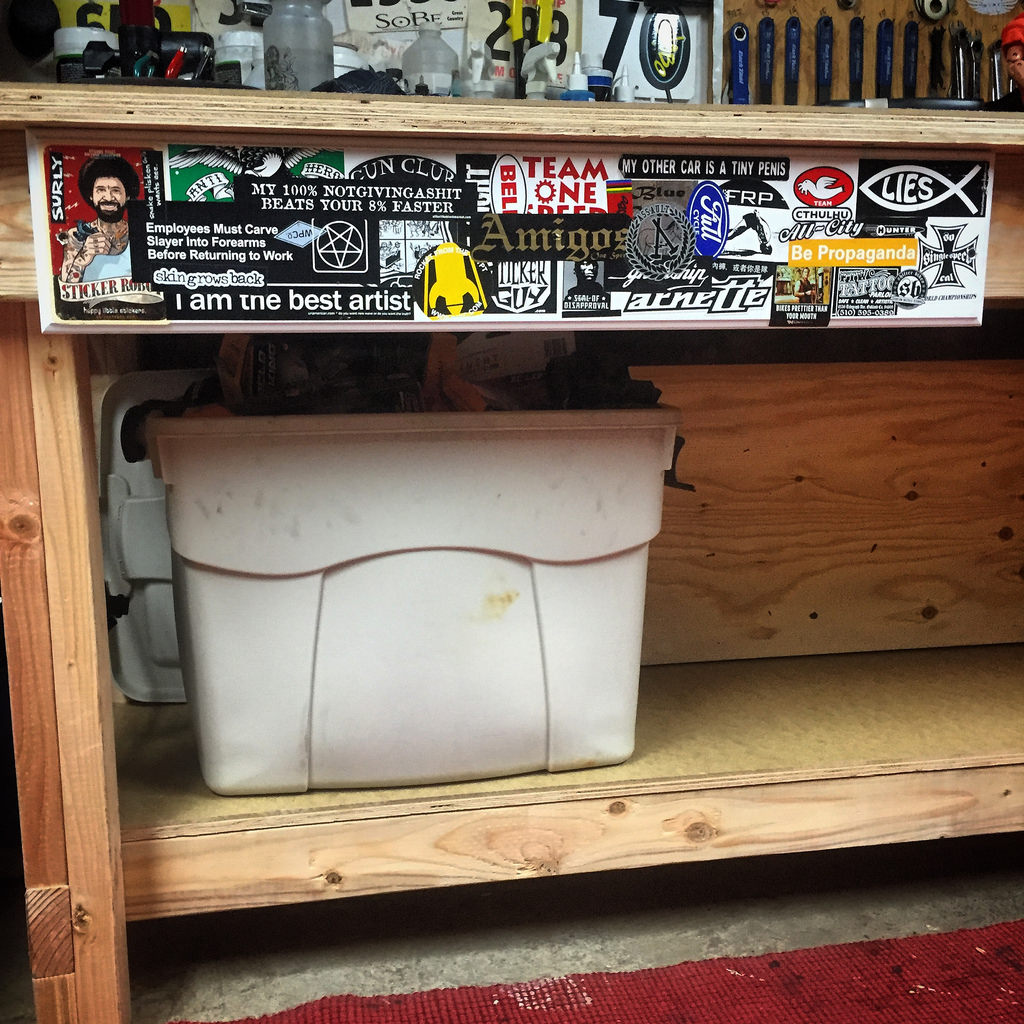 I posted these photos up on Wednesday on the InstantGrahams with a promise to include the plans for anyone who might want to make one of their own, so without further hesitation, here you go; If you’d like a larger version of the image, I have it tucked away right here.

One pro tip I could offer would be unless you happen to have access to a table or panel saw, have the plywood and masonite ripped at the lumberyard, plus it makes it a bit easier to transport.

Also, if you have an aversion to masonite, you don’t have to use it, but it offers the benefit of a smooth surface, and since it’s attached to the plywood with finishing nails, can easily be pried off and replaced once it gets gouged/warped/marred/set on fire/had one too many dicks drawn on it, etc. (Though it’s already been pointed out to me that there’s no such thing as ‘one too many’.)

I suspect I will eventually be getting a little shelving unit to stick underneath in order to organize the remaining bit of my mess, but for those who are feeling extra crafty, installing drawer tracks would only take a couple of minor adjustments to the plans, but I’ll leave that up to you. Personally I think it sounds like a pain in the ass.

If anyone has any specific questions, leave them in the comment field or email directly. Whatever queries I can’t honesty answer, I’m more than happy to respond to with lies.

And it’s with that, I leave you in peace. Get cracking you damn, dirty apes.

12 Responses to “The division between humans and beast.”