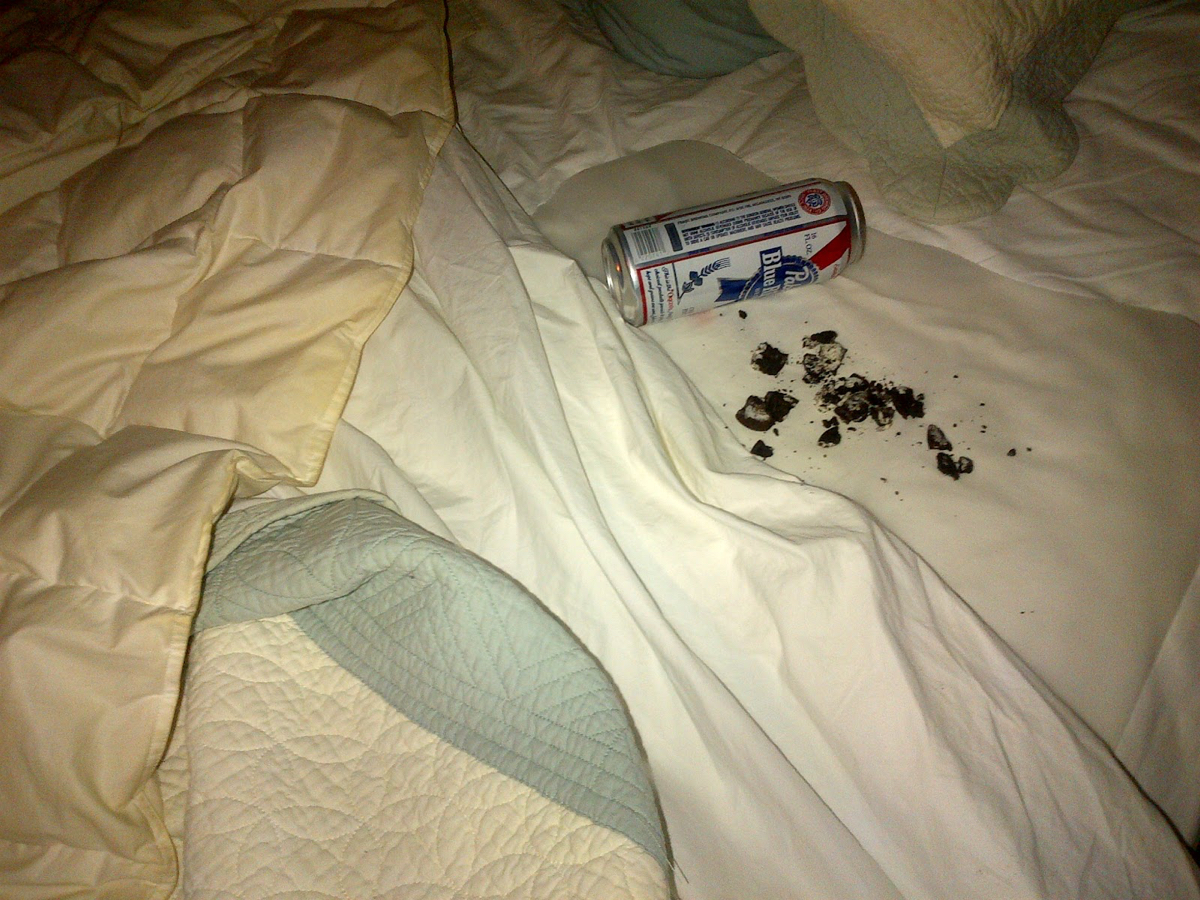 After Monday I thought I’d sufficiently tidied up, but my inbox is a bit of a disaster, so naturally I forgot a few things which I’ll get to today.

I would also like to mention that I finally had my arm twisted to enough of a degree, and the process was made simple enough so that I’m actually going to be at Sea Otter all of this week, and will resume posting on Monday. I haven’t been for a few years, which has been absolutely fine, but being able to ride some bikes, and to slap some hands, and then to actually avoid the weekend’s worth of chaos sounds like an ideal schedule. As always, though there will be crickets here, I’ll be maintaining the Twitters, and the InstantGrahams, and the Facebooks, and the The Tumblrs, but probably not the Google Pluses.

So anyway- Let’s get down to business.

Did everybody watch the Pharee Rübay this weekend? I sure did. I bet afterwords the people who rode in it ate a lot of sandwiches.

So, at the race’s conclusion, I had only a few observations.

Did Boonen pay for this bag? 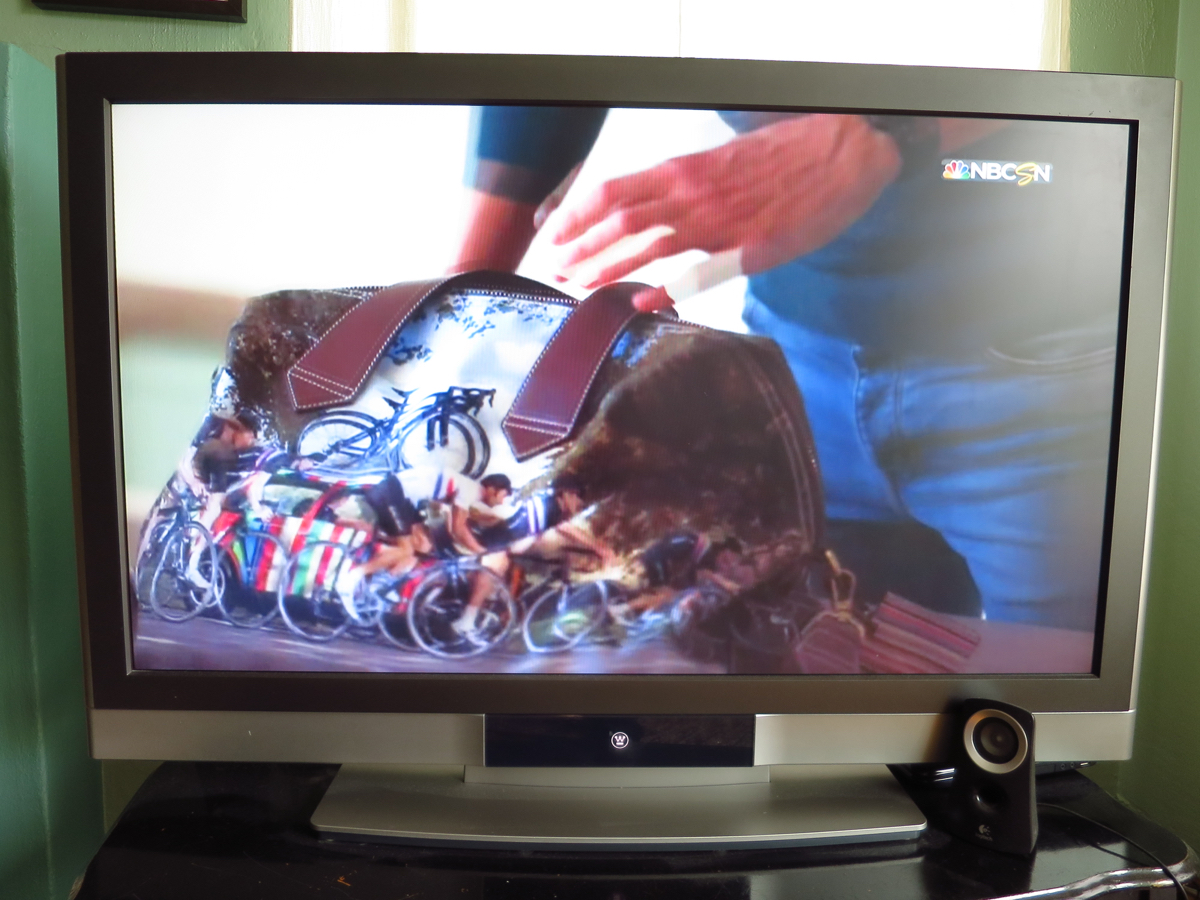 And when he travels with it, is the only thing he carries in it, his gigantic scarf? 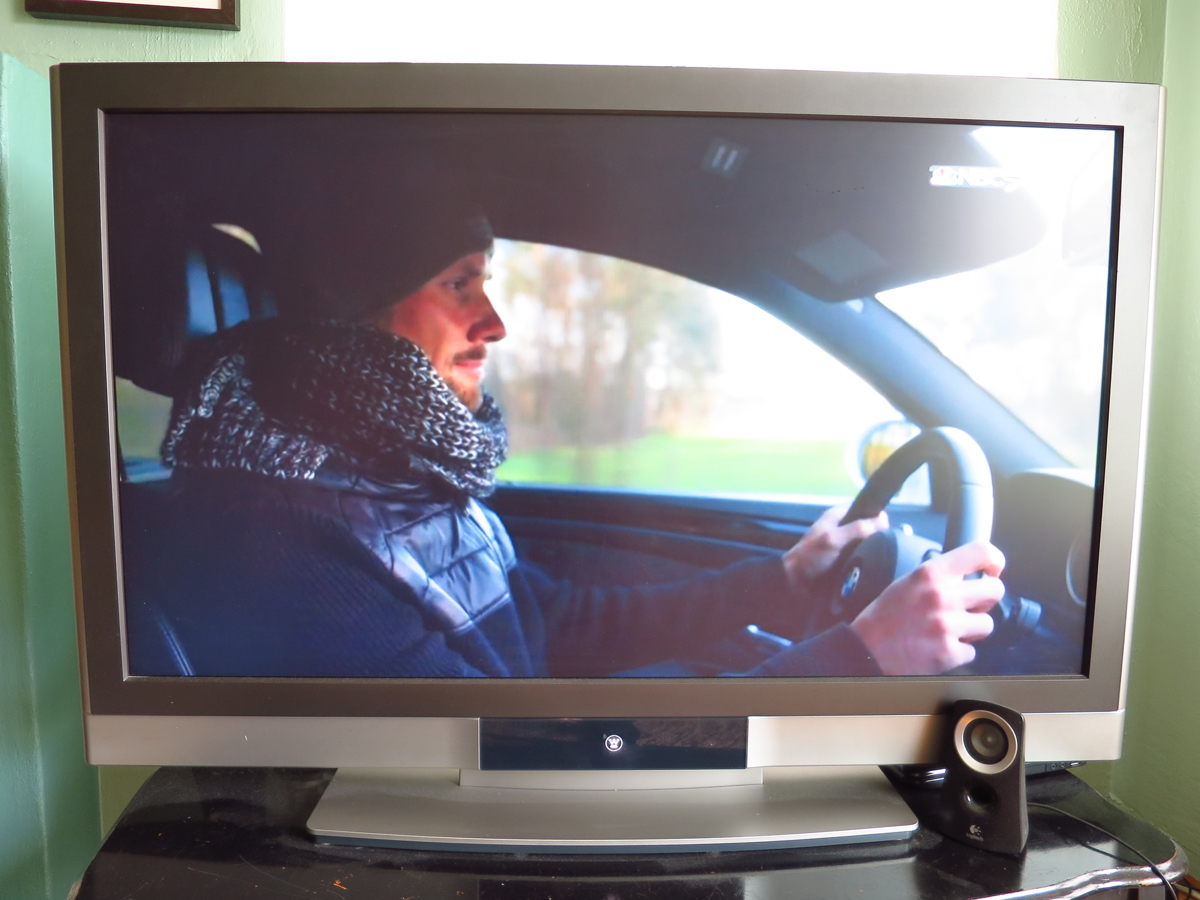 Secondly, am I the only one who sees an uncanny resemblance between Tom and Hermey?; Why at this stage in the race, didn’t drunk uncle Paul and drunk grandpa Phil make any reference about the sky falling? Also- What do you reckon the chances are that Hayman is making a poo at this exact moment? Lastly- You just rode 300k, Spartacus. Showboating will clearly get you nowhere; 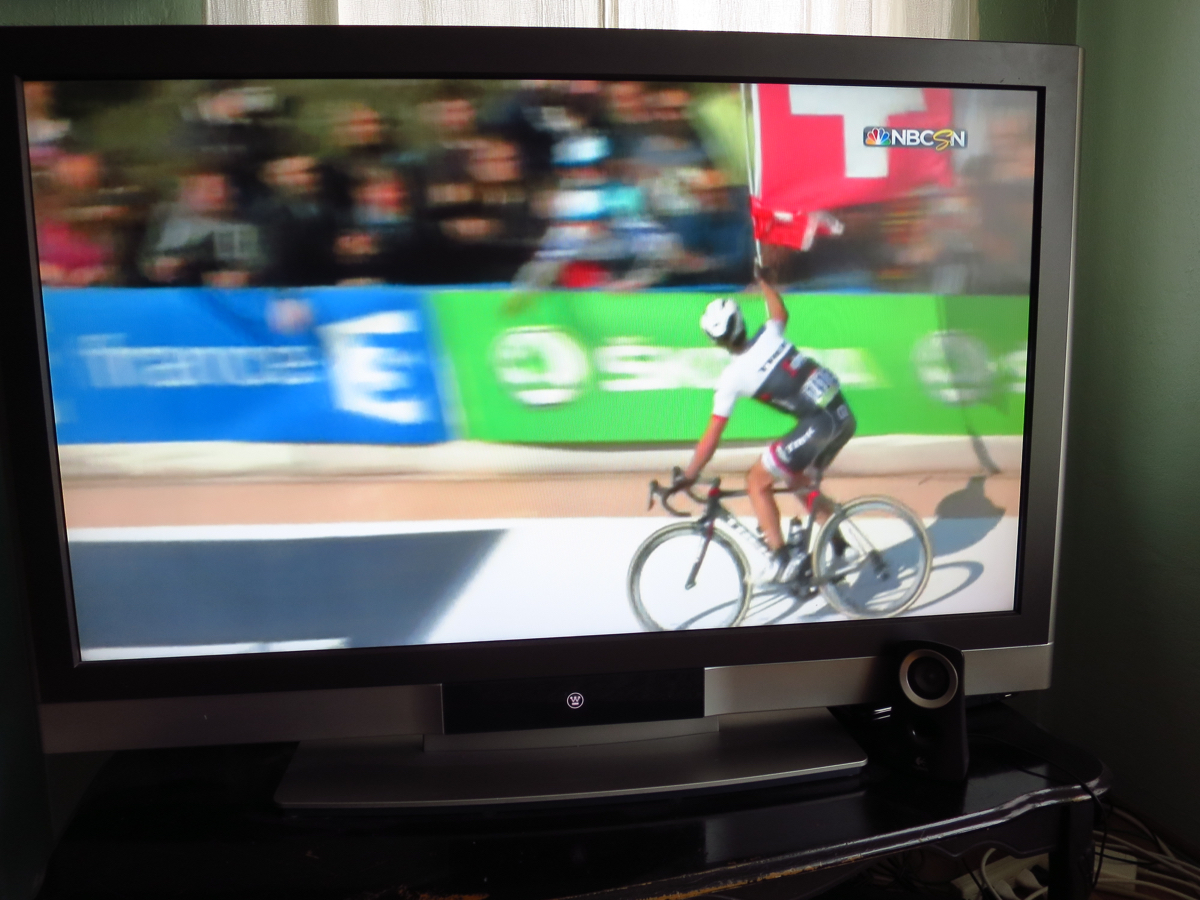 Oh- and the other thing… 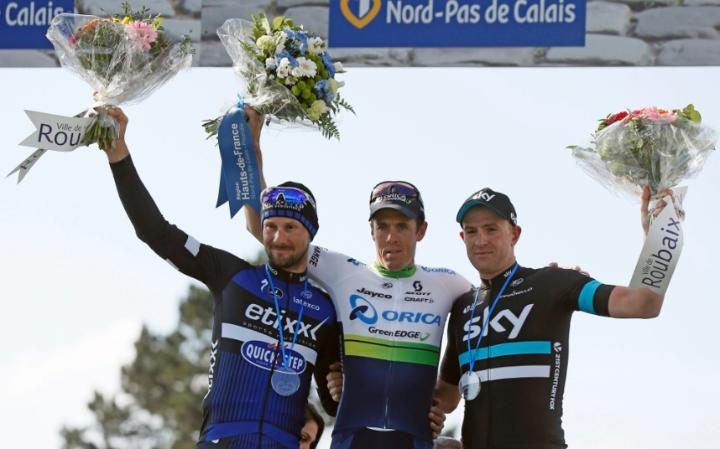 I anticipate that there will be at least one person bummed by the fact that I spilled the beans on who won, because they were waiting for next year’s Cycling World video of the race.

Moving on- In response to my last week’s ponderances regarding on-line life, Paul from Atomic Cycles put on his cartoonist’s hat and sent on the following; 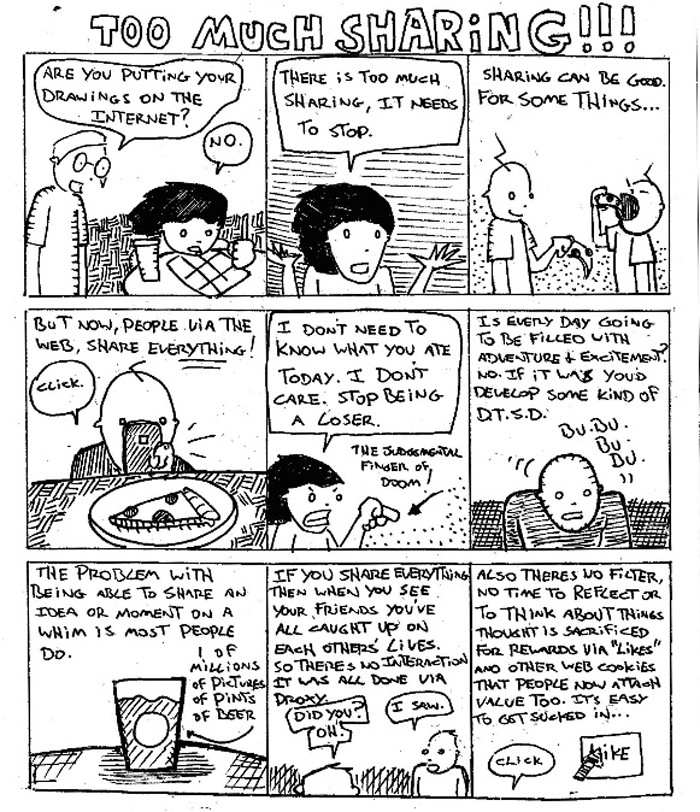 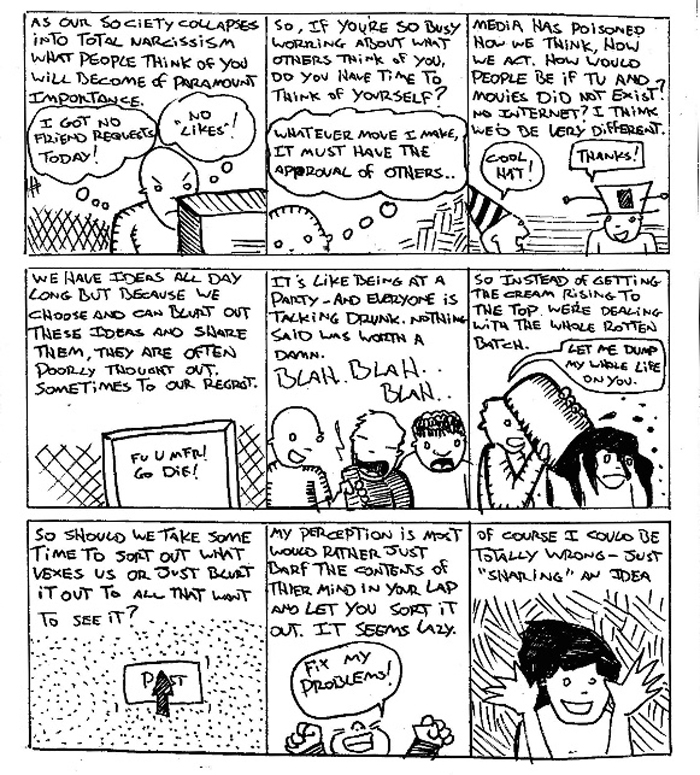 Existing squarely on both sides of the discussion, I vote yes to all of it.

Flouncing from virtual life to actual, real-live physical ones, Ben from the Coffee Brake mug made with the contact regarding a project he’s moving forward with;

This is Ben from Coffee Brake Mug. I’m reaching out to you in hopes you can help us spread the word about our ongoing kickstarter. I trust that you’ll make sure this falls into the right hands or it might just sit in your inbox and collect dust. Either way. (You may have already been contacted by BackerCamp PR – but we decided that was too impersonal for the product that began as a labor of love in our garage!) I know you get hit up to review a lot of products, but this story, the Coffee Brake story, is one people are really getting a kick out of. 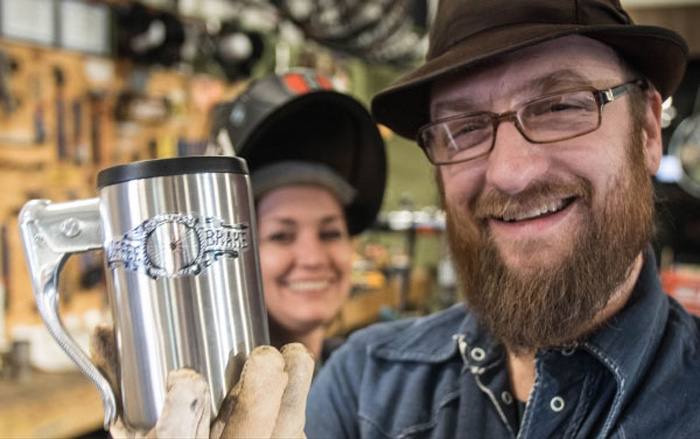 Our accidentally-genius stainless steel mug was born out of tragedy. I wiped out on an icy street. Sure, that hurt. But way worse: I lost my coffee! You can see a funny video detailing the coffee catastrophe here.

I was a bike shop owner in Minneapolis and did the first thing that came to mind. I replaced the cheap plastic parts of my mug with a spare bike brake lever. My wife, Lisa, and I built and sold thousands of previous versions and are now set to bring the new, improved Coffee Brake Mug to more folks via Kickstarter. (Fingers crossed.)

If you think the mug is something your readers (who like cycling, great design, funny videos … or just drinking various liquids) would enjoy, we’ve included a link to a press kit of sorts and would personally be available for talking about the process, recounting the time I fended off a wild Rottweiler with it, or discussing the early days of the Scallywags ethos (seen in this Discover Channel video from ages ago);

• The campaign is live on Kickstarter now. Check out the Coffee Brake Mug here.
• Here is a handy link to our press kit with photos, videos & more in-depth (more boring) press releases .

Thank you so, so much for your time and consideration. I’d love to know if you might feature our story this week – and I’d appreciate any advice on how you think I can get the word out to more people!

So there you go. I’ve presented all of the links, videos, and info at which you can shake as many sticks as you care to. If one of Ben and Lisa’s mugs is a thing you can see in your life, you know what to do.

Personally I prefer to drink my coffee from my cupped hands, but I realize I’m in the minority with that.

Lastly, before I go, we have a bit of info from Jeff over there at former Maximo Supremo resident All City Bicycles;

Hello folks,
Today All-City is pleased to announce a new cap in collaboration with the Bicycle Messenger Emergency Fund. We are more than excited to continue to give a little back to the Mess community worldwide, and are honored for the opportunity to partner with this amazing organization.

“Since day one, All-City has been proud to support the courier community both in the United States and abroad. This cap created in partnership with the Bicycle Messenger Emergency Fund is one more way that we are able to give a little back to the folks who started this whole urban cycling thing.

If you’re not familiar with the BMEF, here is their Misson Statement:

The Bicycle Messenger Emergency Fund is a 501 c3 non profit public charity organization that provides emergency compensation to bicycle messengers who are hurt on the job. Currently the BMEF allocates a $500 emergency cheque to help messengers anywhere in the world during the first week of injury. This provides a boost, to both the financial and the mental/emotional state of the injured messenger. The goal is to help the injured cope and recover. Featuring the BMEF logos on the side panel and top brim and All-City on the underside, this cap is made in Italy and is totally sweet.

50% of the proceeds from this cap will be donated to the BMEF in support of our messenger friends around the globe.”

How does that grab you? It’s just another way that friends can help friends who help friends, plus you get a spanky chapeau out of the deal.

Alrighty then. As I said previously, I’m up and outta here for just a few days. Please take care of yourselves and we’ll catch you on the flip side.

2 Responses to “I found a couple of remaining crumbs.”