If you might recall, we had just gone over all the sordid details regarding this year’s Kona Bicycles 2017 line.

Because my timeline is a little jacked, I’ll rewind to the end of day one, just after having sampled some of the trails Squamish had to offer.

Following the ride it only made sense to drink beer at the pool. It’s a natural response and if I remember correctly, a thing that I think was in the bible. When those two ingredients are combined, and most certainly with people like this, hijinx naturally occur, which of course they did in spades; 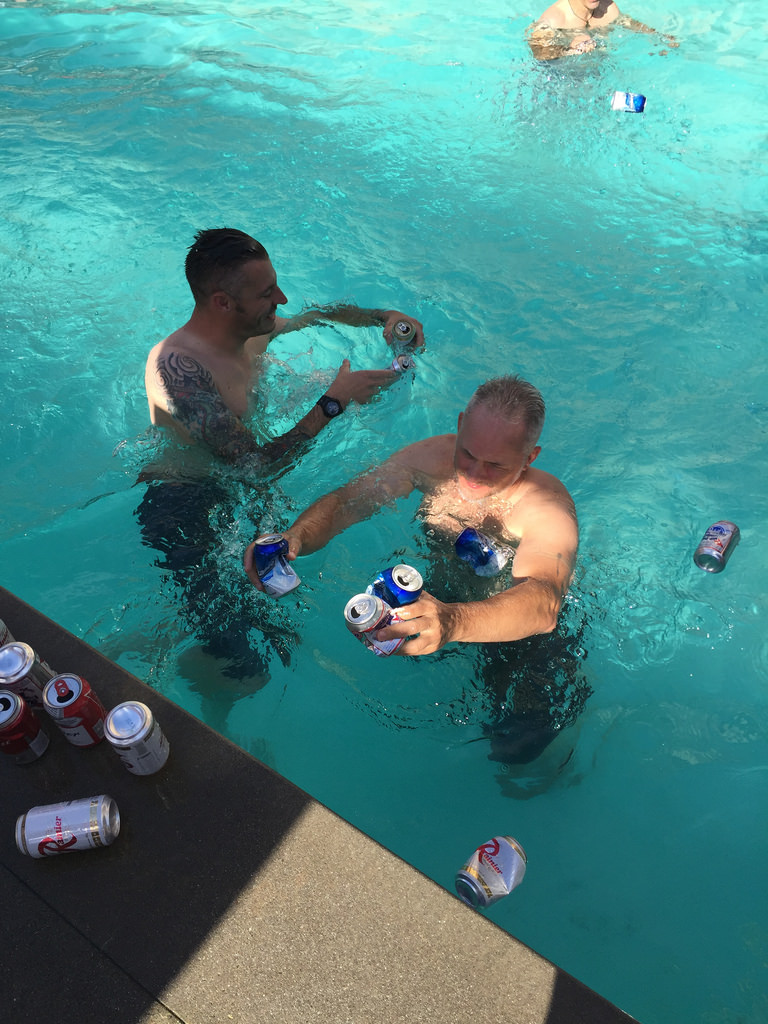 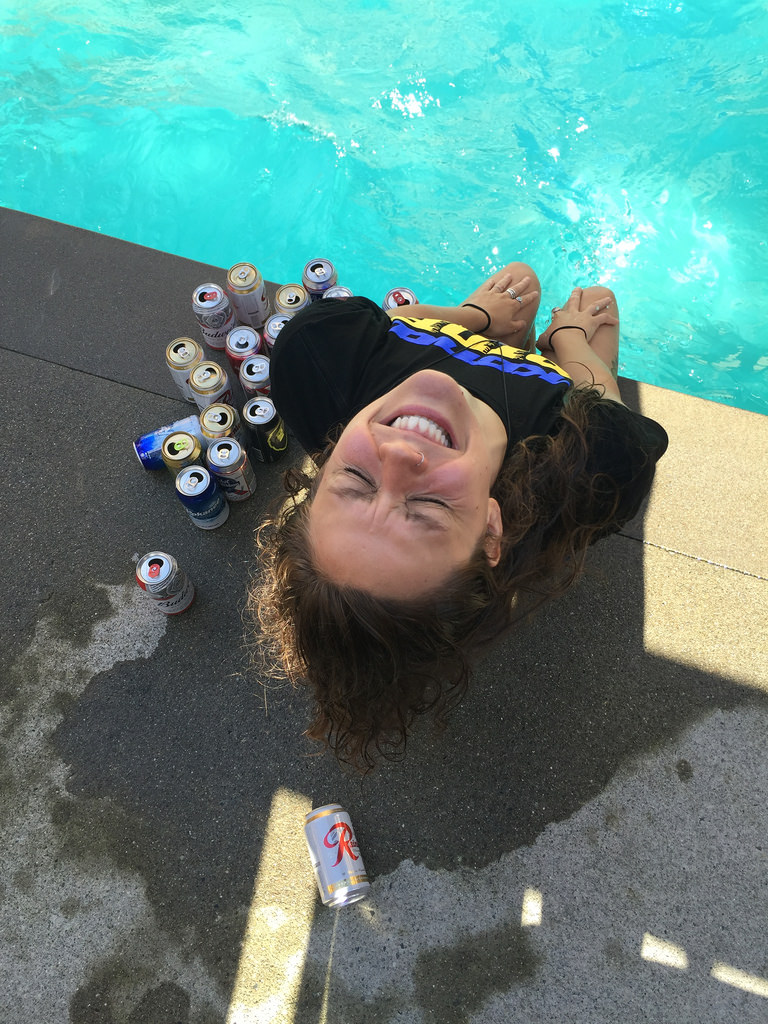 
Some time during my third Triple Lindy attempt, I slapped down on the water with force and immediately heard a deafening ringing, followed by nothing. I thought I might had just gotten water in my ear or possibly dislodged the Barbie shoe I put in there where I was three. Not only am I no doctor, but I’ve never played one on TV, so I did what came naturally which was to ignore the pain, continue drinking beer and jumping in the pool until it was time for dinner and that evening’s feats of strength.

In years past, ordinarily on the first night, and once everyone has eaten dinner, some sort of circuit race, or time trial, or relay event is concocted. This year it involved a derelict golf course, life jackets, full face helmets, frisbees, some skivvies, and two Kona Units.

It all makes perfect sense, right?

As it turns out, it did, though because of the fact that all I had to document it was a fairly crappy little idiot camera, the resulting images certainly left something to be desired; 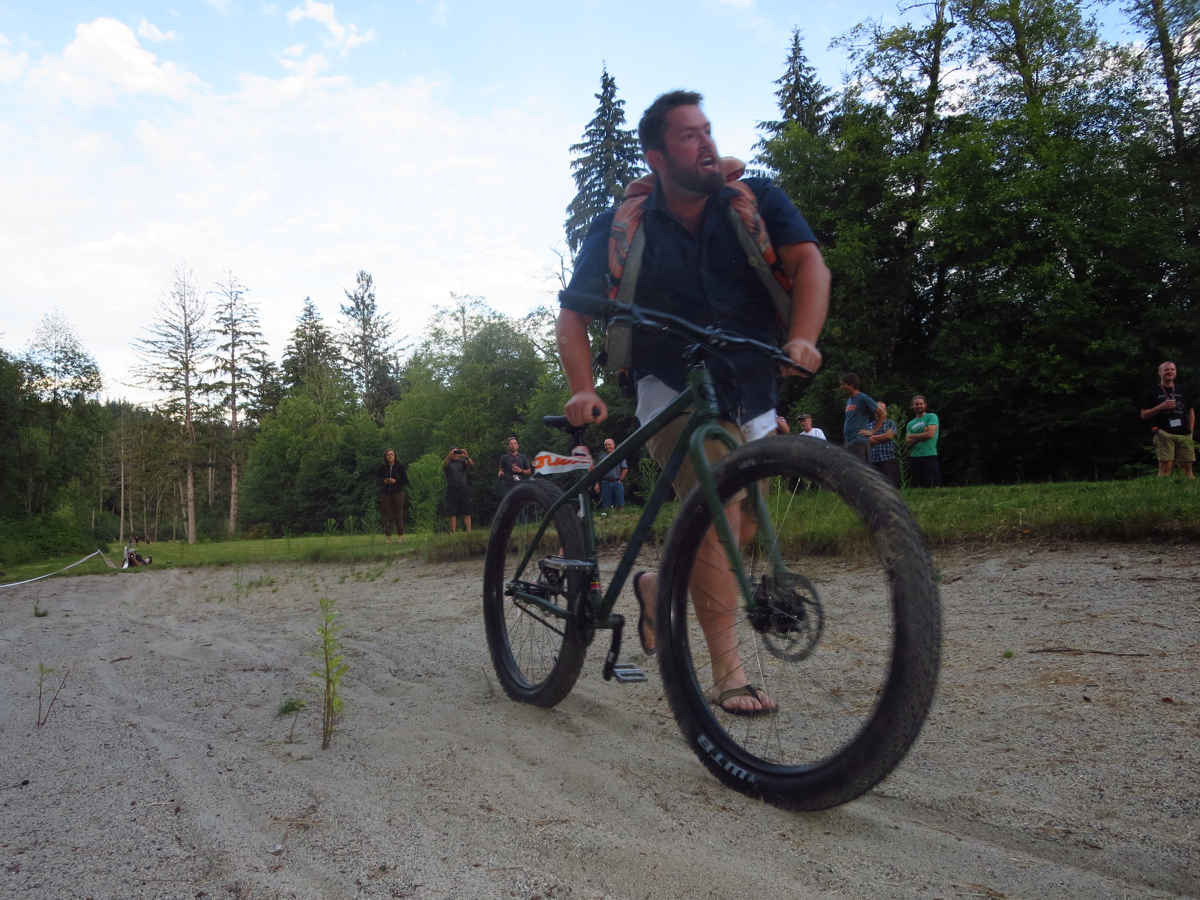 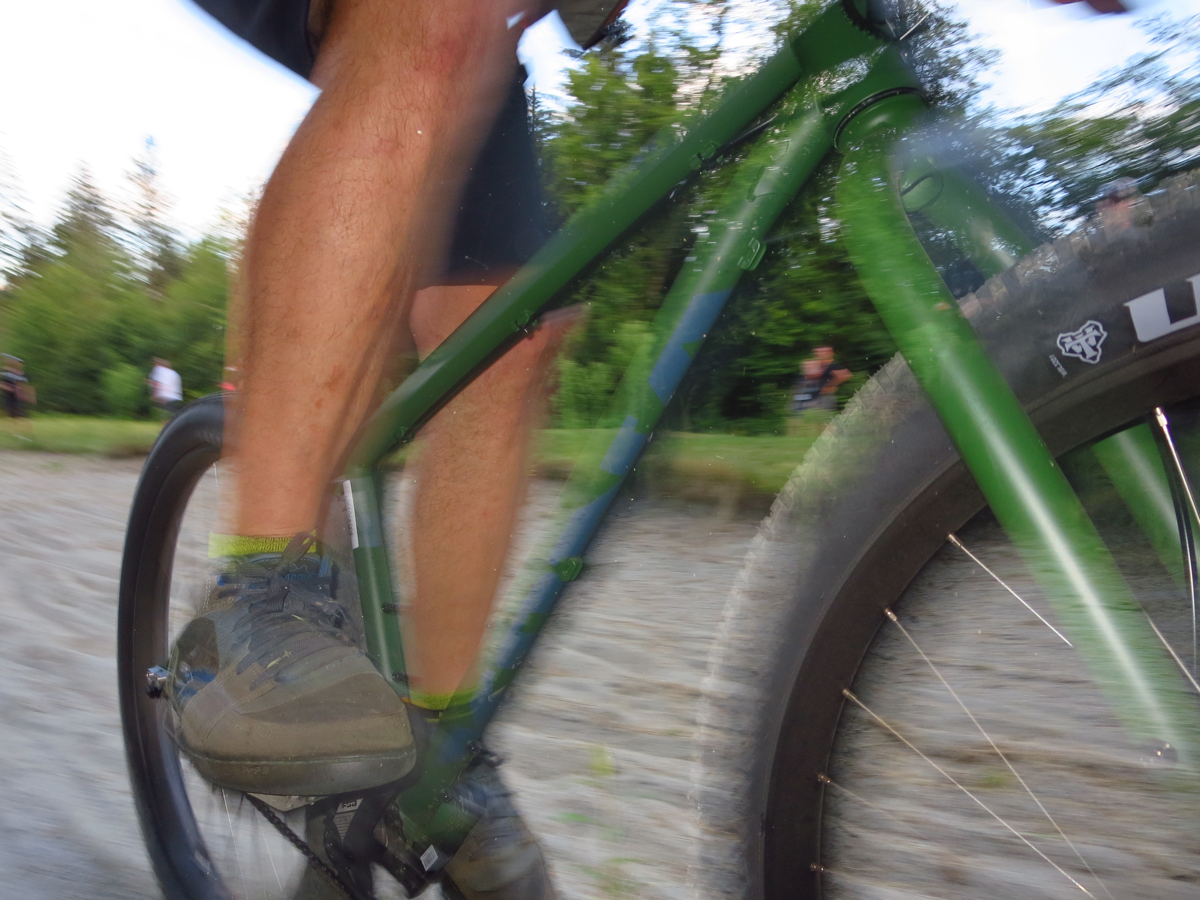 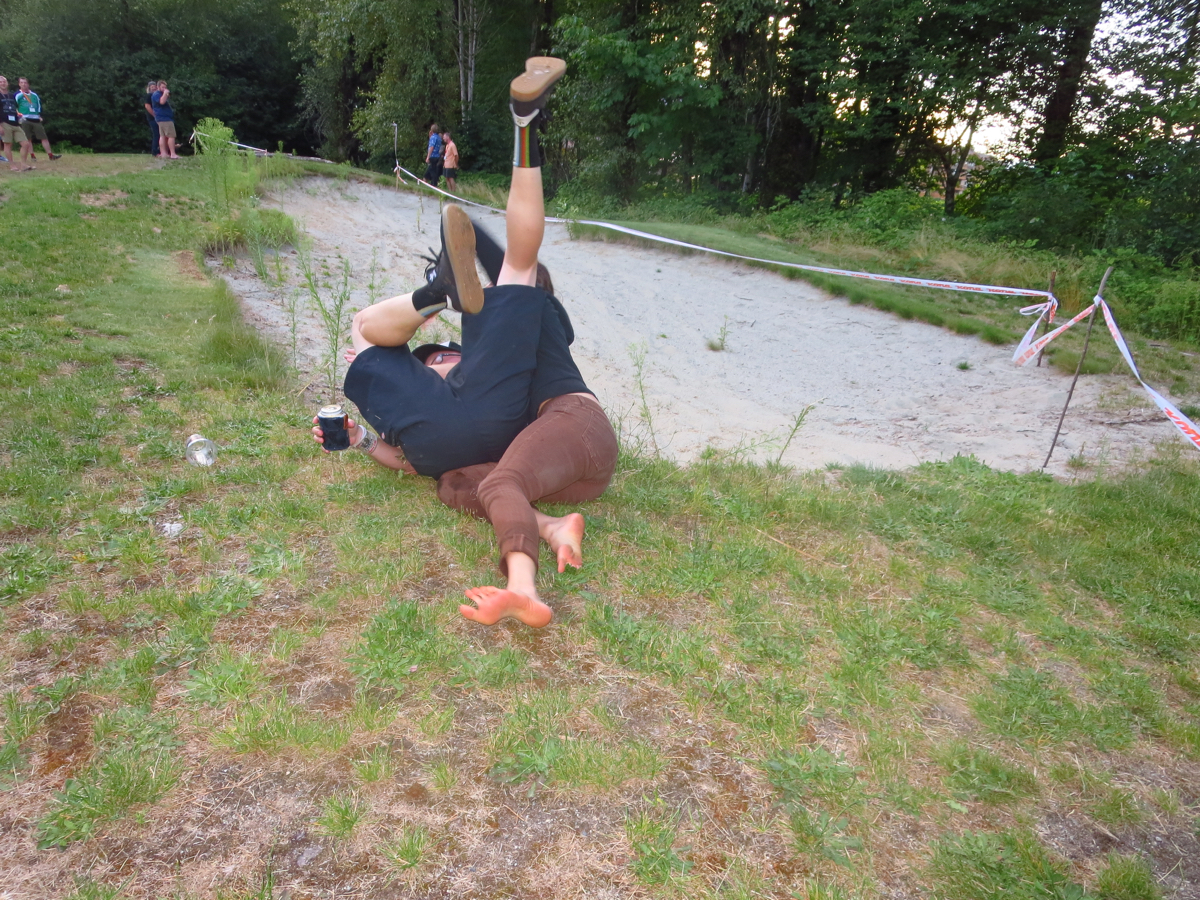 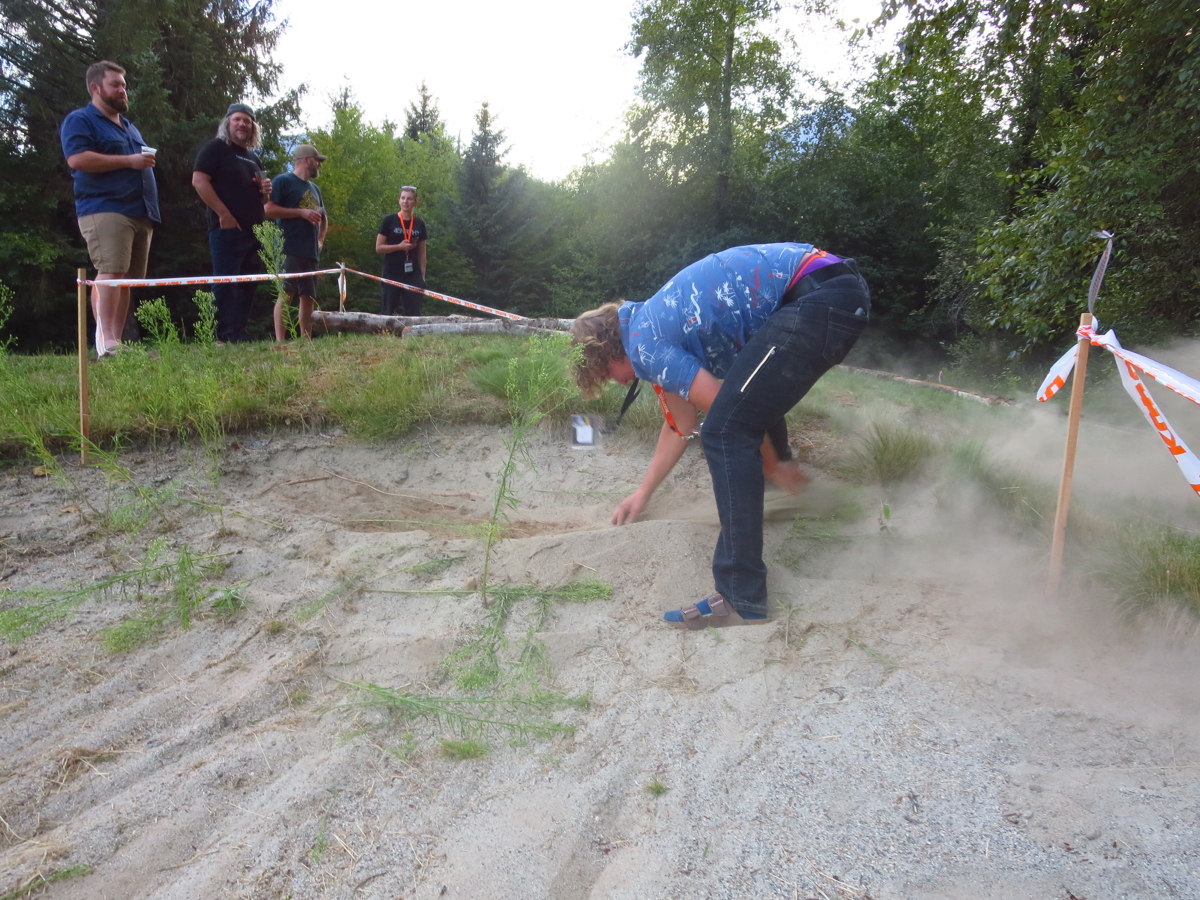 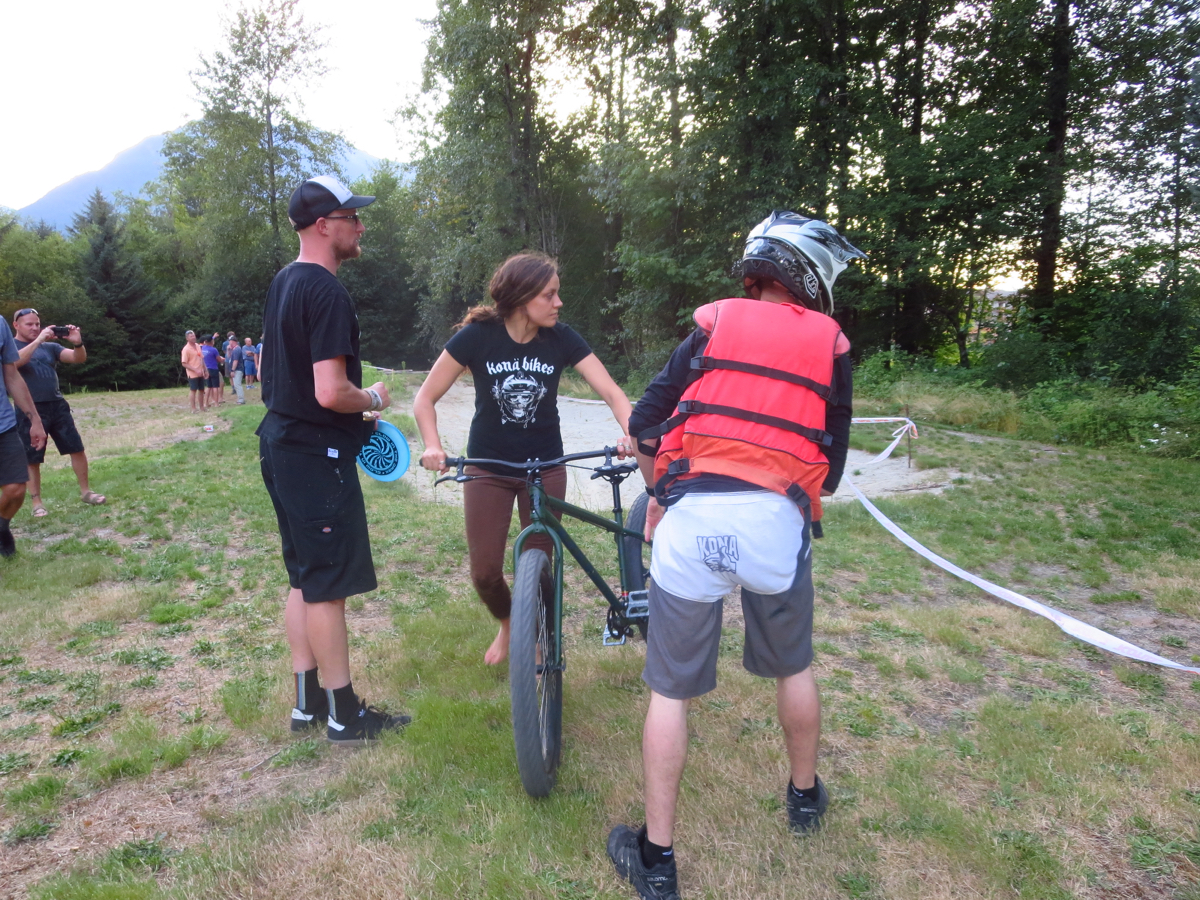 I’d reckon that eventually some of Caleb’s photos will be all over the internet, and I can guarantee with absolute 100% certainty that they will be fantastic-er than mine.

That’s the eye of the tiger right there; From that point the evening devolved into a rolling shit show, some of which I remember and most of which I don’t. I suppose if the rest of the night could be personified, Jason from Carrboro, North Carolina’s Back Alley Bikes could fit the bill; 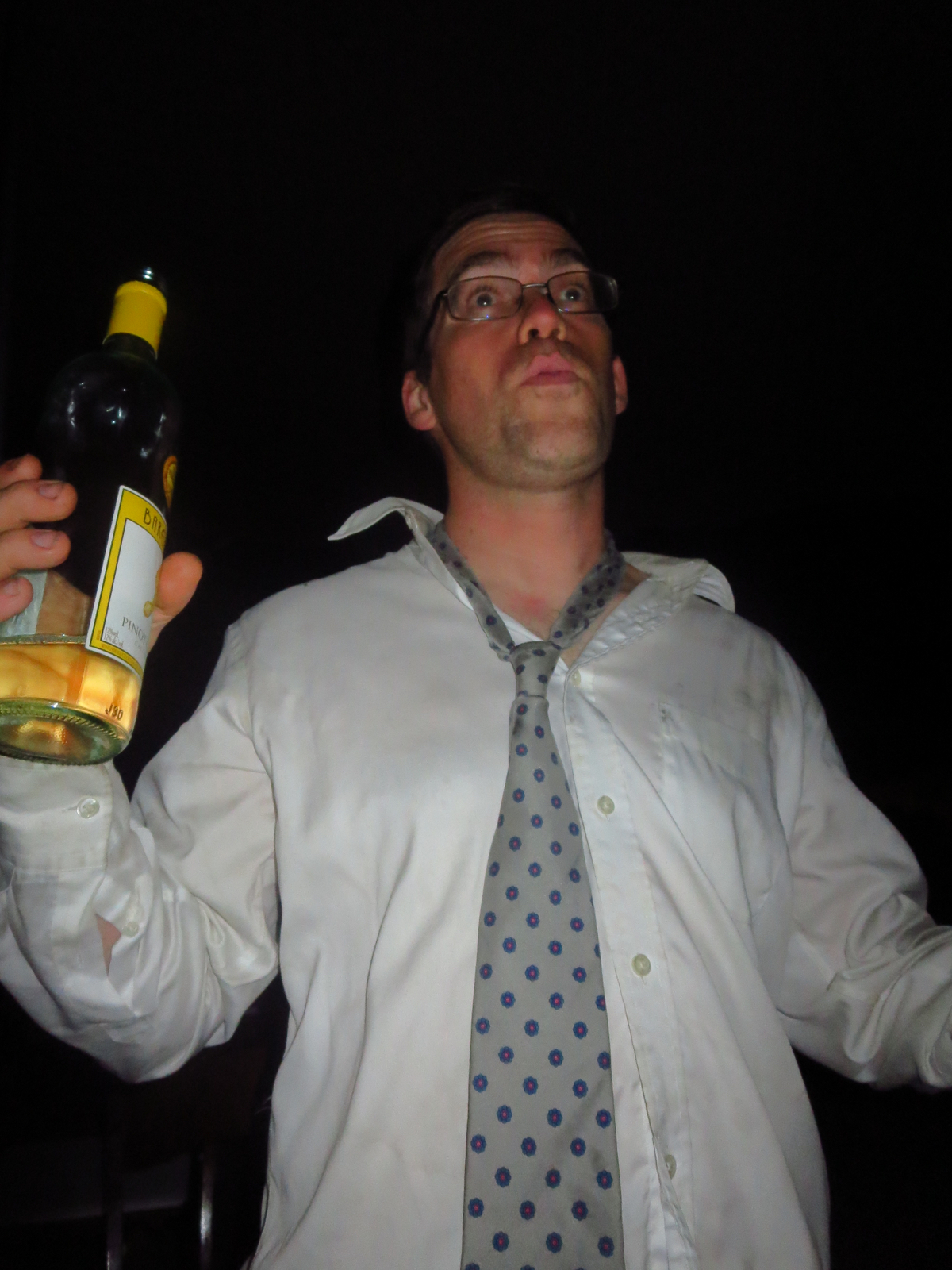 Before I laid down for a deep four hours of sleep, I came across a fella from Rock City Cycles named Steve. He told me that before they’d arrived to the camp, he’d traveled to compete at a fairly high profile remote controlled car race. Immediately I wanted to know more, and I could tell he thought I was razzing him, as I guessed people heckled him with some consistency about his secondary hobby.

In reality, I was not, because the little kid in me thinks super fast, super pissed off, off-road cars are just about one of the coolest things ever. We went up to his room and he gave me the full run down on his car, which was bad ass; 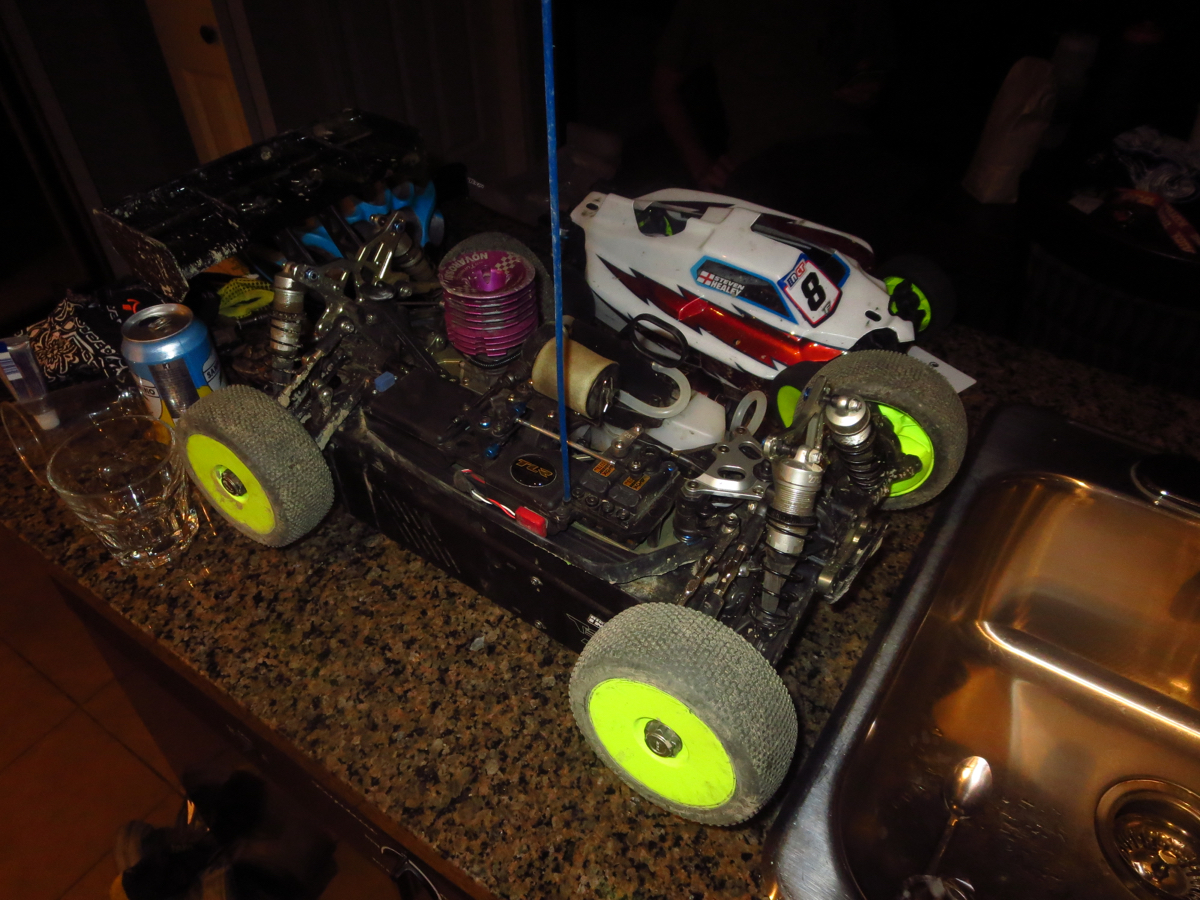 I wanted an opportunity to take it out into the aforementioned derelict golf course, but as fate would have it, it just wasn’t in the cards.

Also I don’t think he trusted that I wouldn’t immediately jump it in one of the nearby ponds.

As I barely was able to crack my eyes open the following morning, I assessed the issues with my completely shattered equilibrium. I then applied that to another day of riding. As I briefly noted on Wednesday, it seemed like a good idea to take Sutra LTD out upon the nearby trails to really turn the screws on myself.

Granted, while it was by no means and epic journey, it was a fair challenge riding a twirly barred bike on the roots, rollers, and rocks of British Columbia.

It was in every since of the phrase taking a pencil to a gun fight; 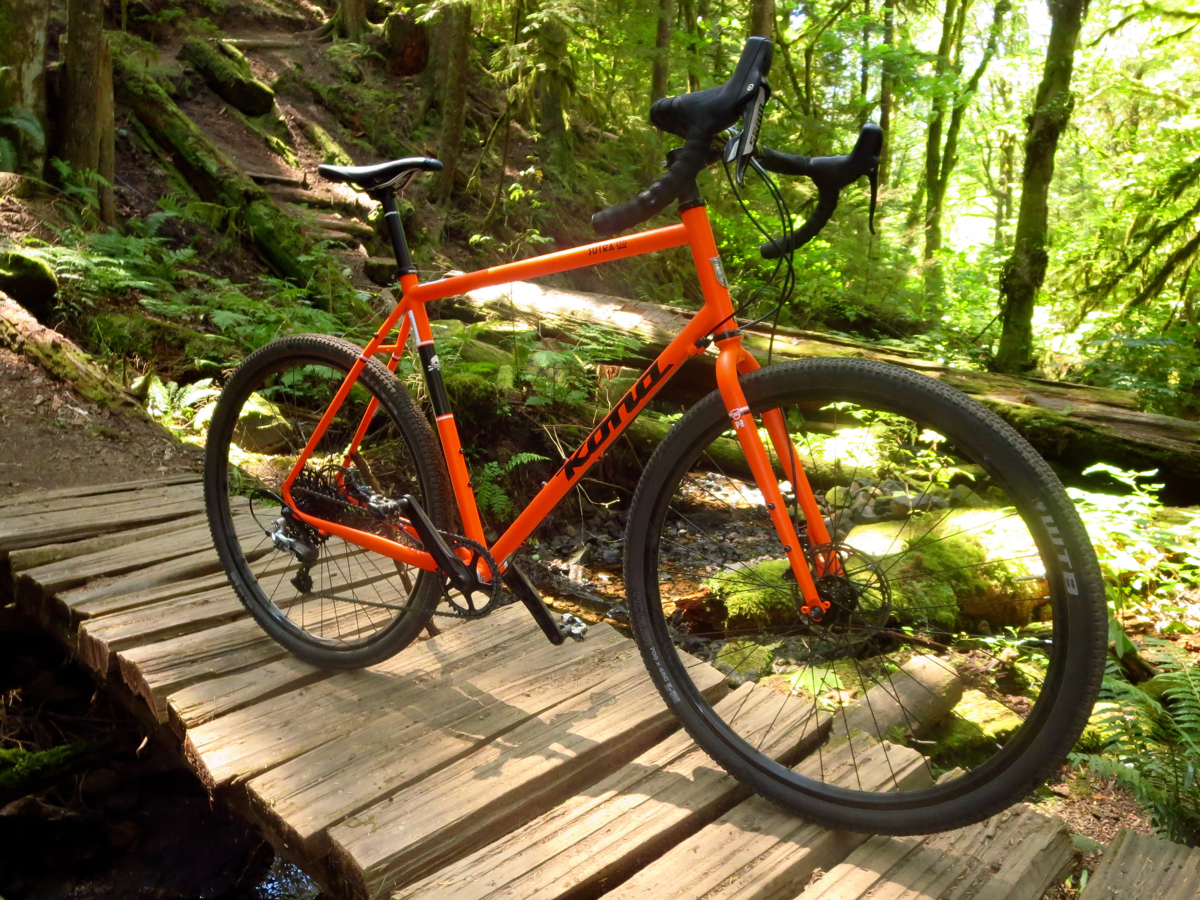 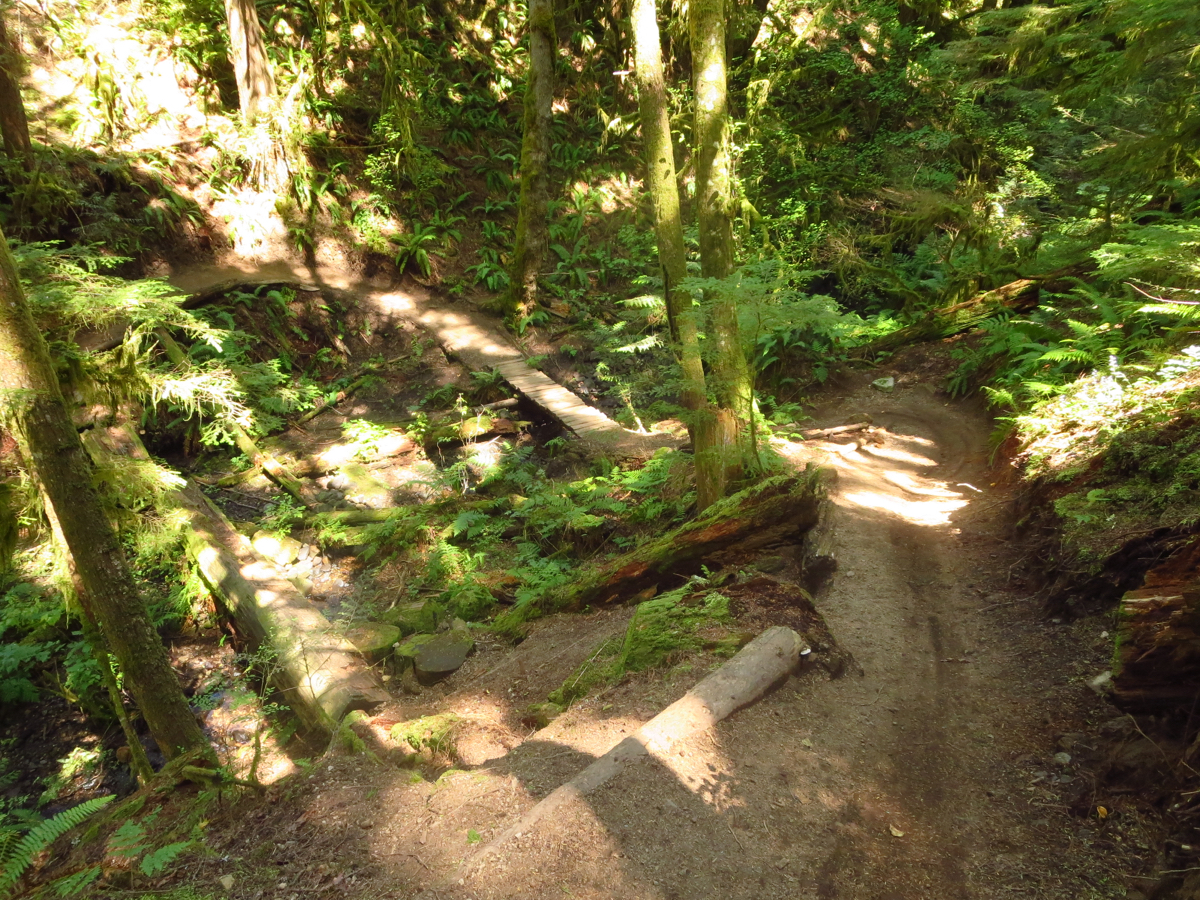 Though it might not have been an ideal bike to choose for the terrain, it is a hugely fun bike to ride just the same. The geometry is the same as it was on the 2016, and the spec has more or less remain unchanged. I don’t remember exactly, but it seems to me the 700×45 WTB Riddler tires are bigger than what was spec’d on its predecessor, nor do I recall the stock bars being flared out as they are on the 2017, which I absolutely loved.

I tried to go back and check Jason’s bike from last year but there’s too much junk hung all over it; 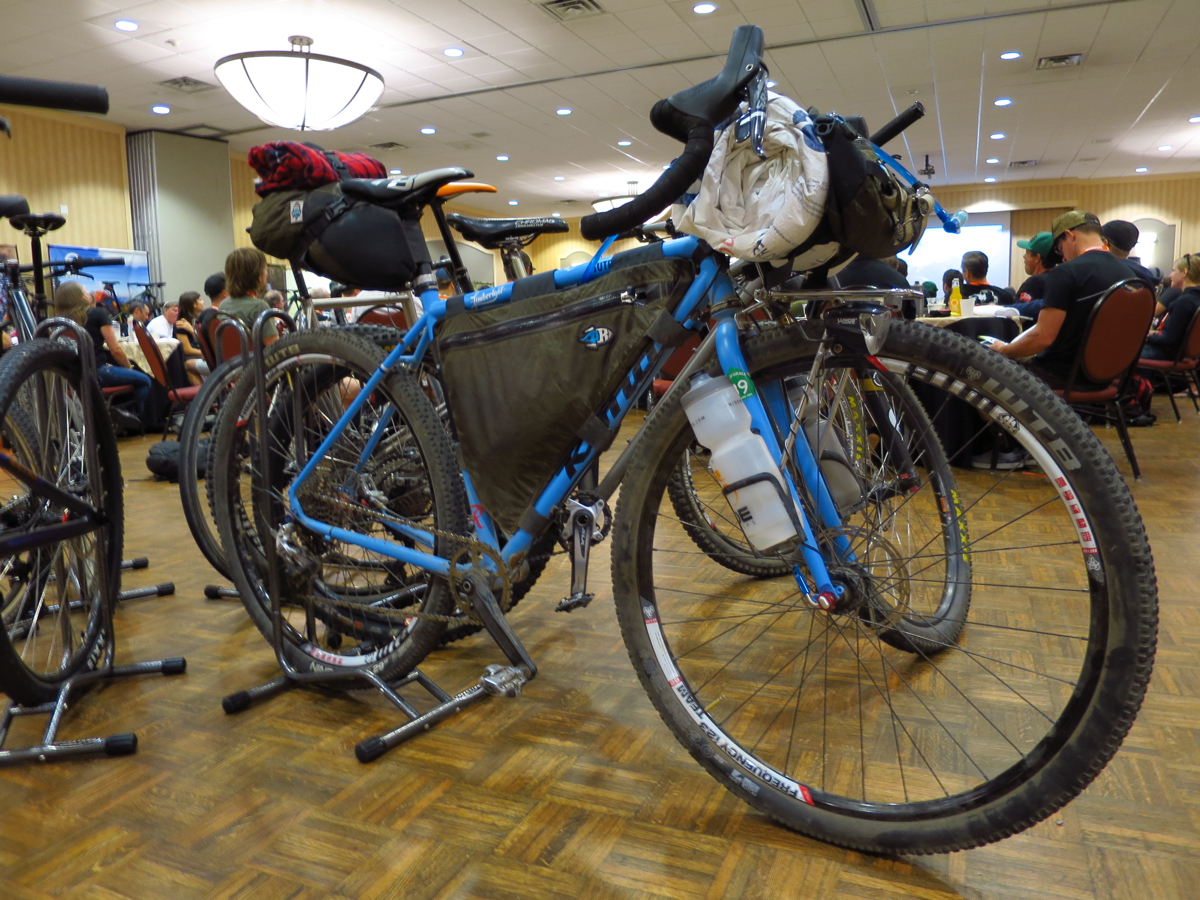 Towards the end of my day of tempting fate, I peeled off the side, sat down next to a waterfall and cracked open a can of beer, which in some instances has become my favorite part of the bike ride.

So there I sat, watching clouds go by, until I was eventually joined by a couple of fellas from central Washington State, and we hung out for a spell, working diligently to solve some of the world’s problems.

Finally returning to the venue, we ate more food, drank more drinks, talked more bikes, and at some point, with the claustrophobic sensations being caused by the deafness in my ear, I could either goof around with my compatriots, or take crappy photos. Alas, apparently I couldn’t do both, as my documentation curtailed with these; 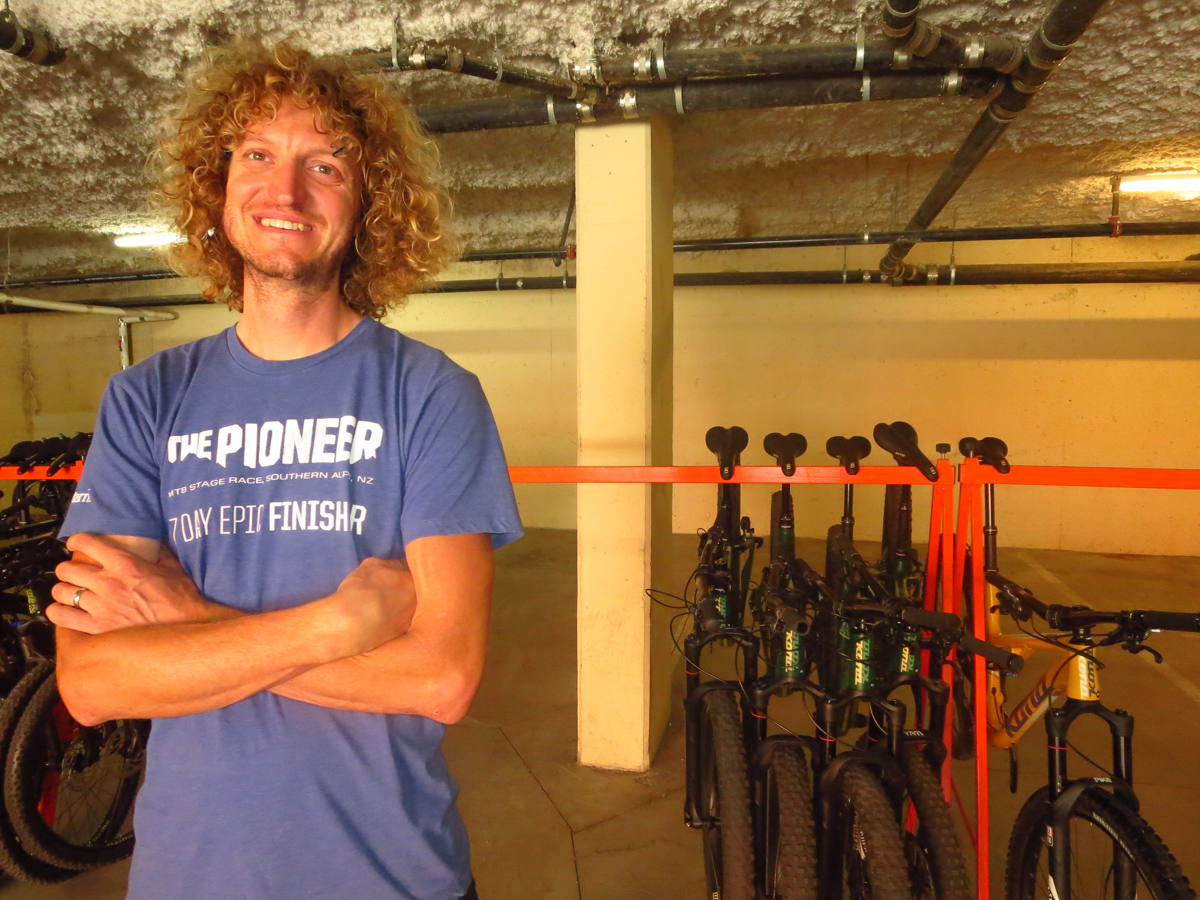 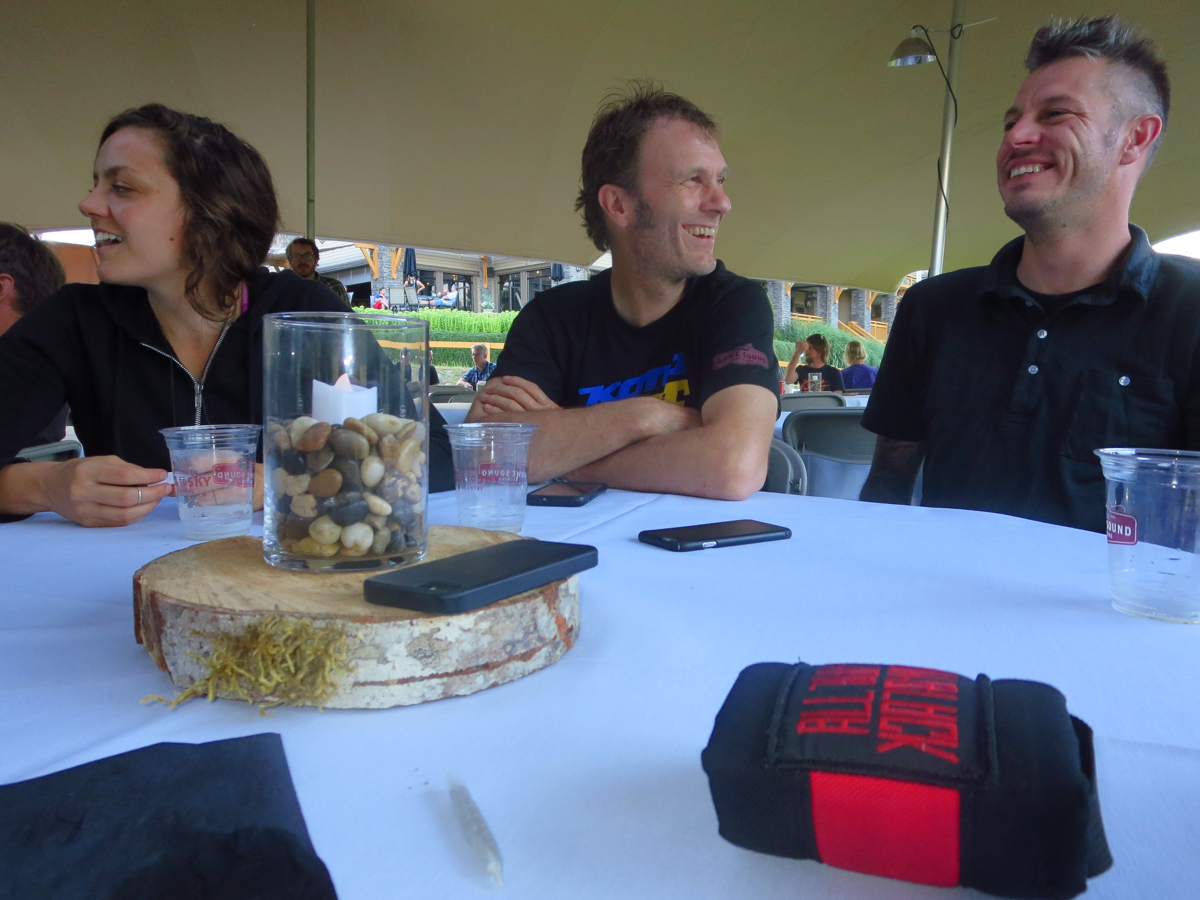 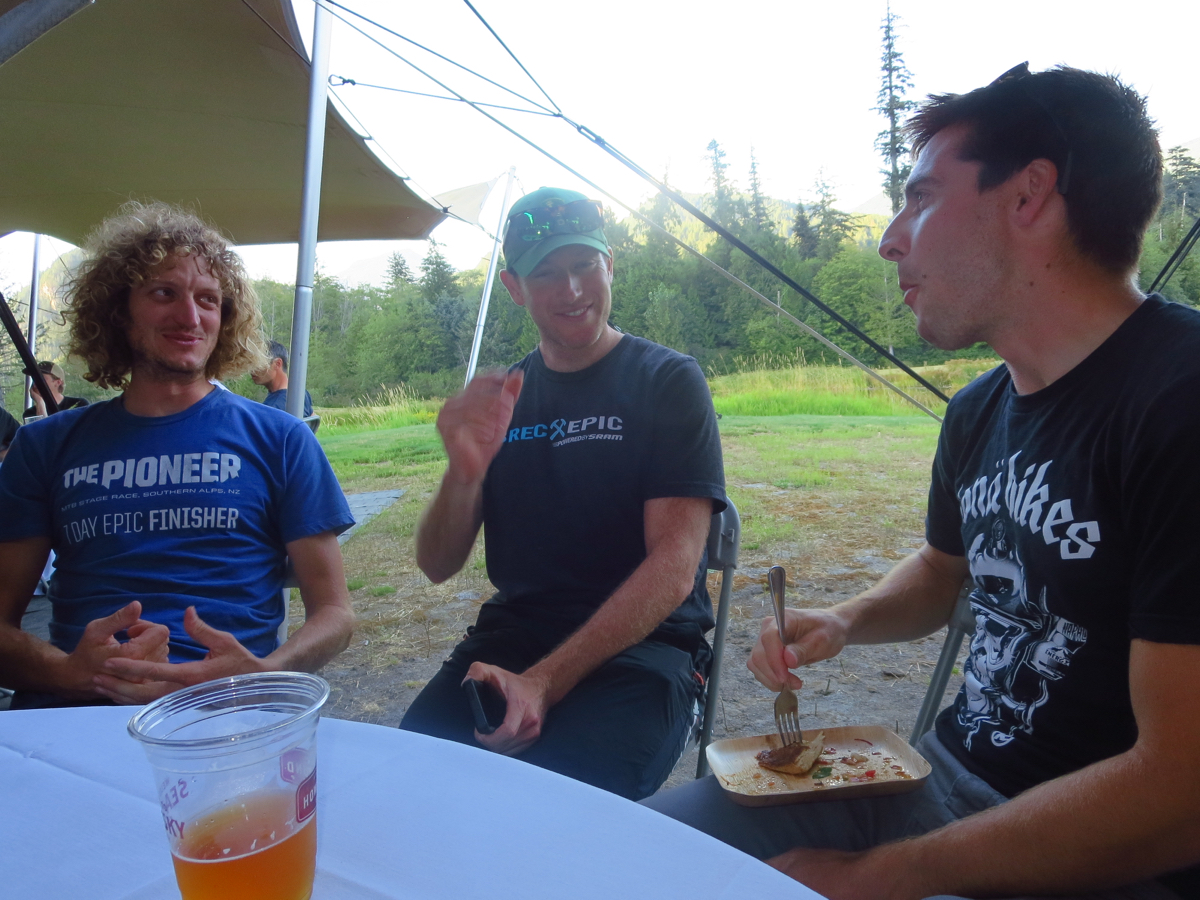 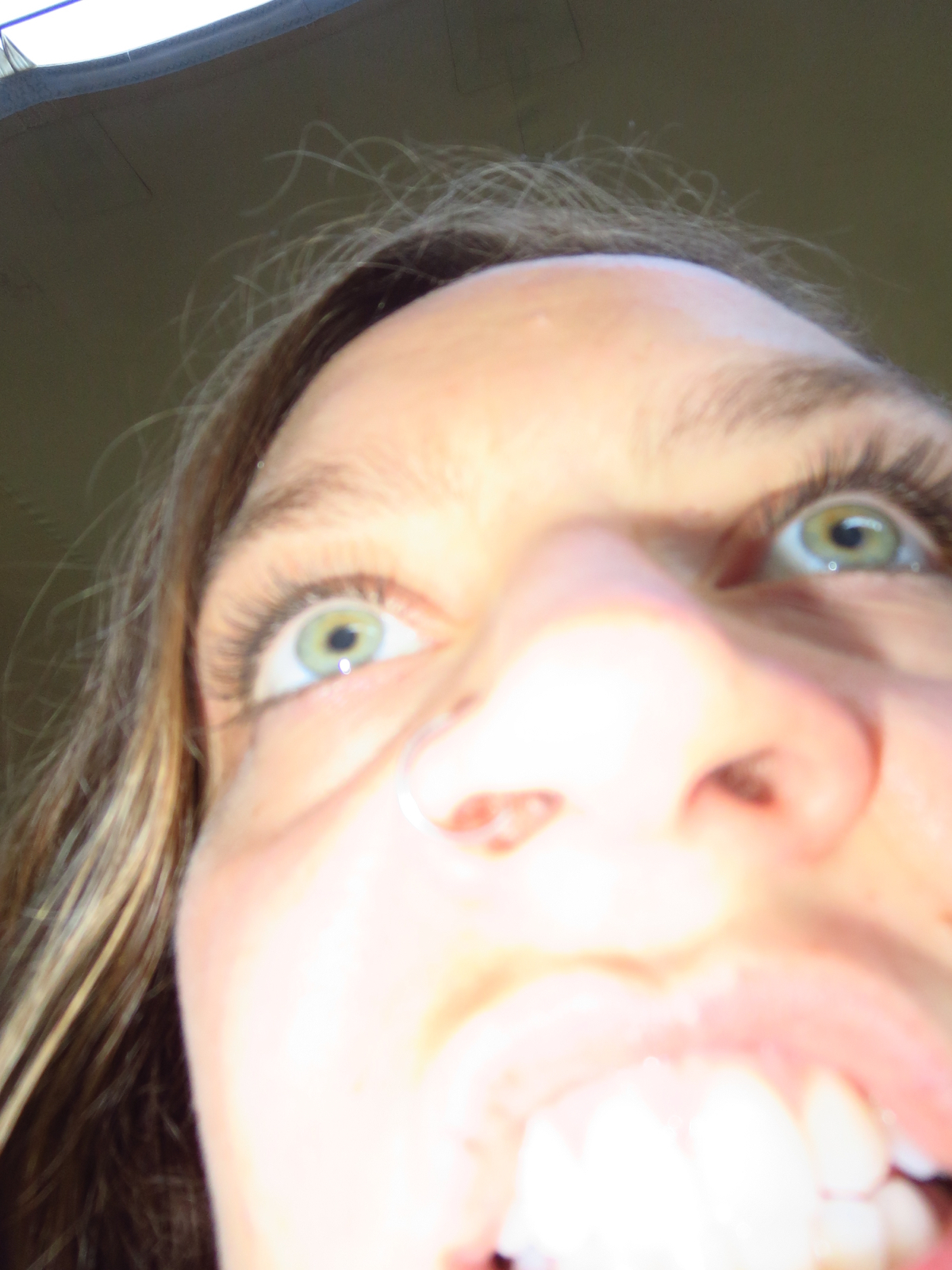 Naturally, as soon as I arrived to town I took note of two nearby businesses. One being the closest liquor store, and one being a walk-in medical clinic. I clearly know myself well. On my final day in town I made my way to the clinic and got checked out by a doctor for somewhere between $50, and $500.00 less than it would cost in the states. She told me that yes, I did blow out my eardrum, and that it was quite infected, which could have explained my general level of wonkiness. She sent me off with a prescription for some magical ear drops, and I soon boarded a bus to Vancouver where I then boarded a light rail, and then finally a train, which ultimately swept me back to Bellingham where this whole shitshow started, and where I’m currently typing these very words; 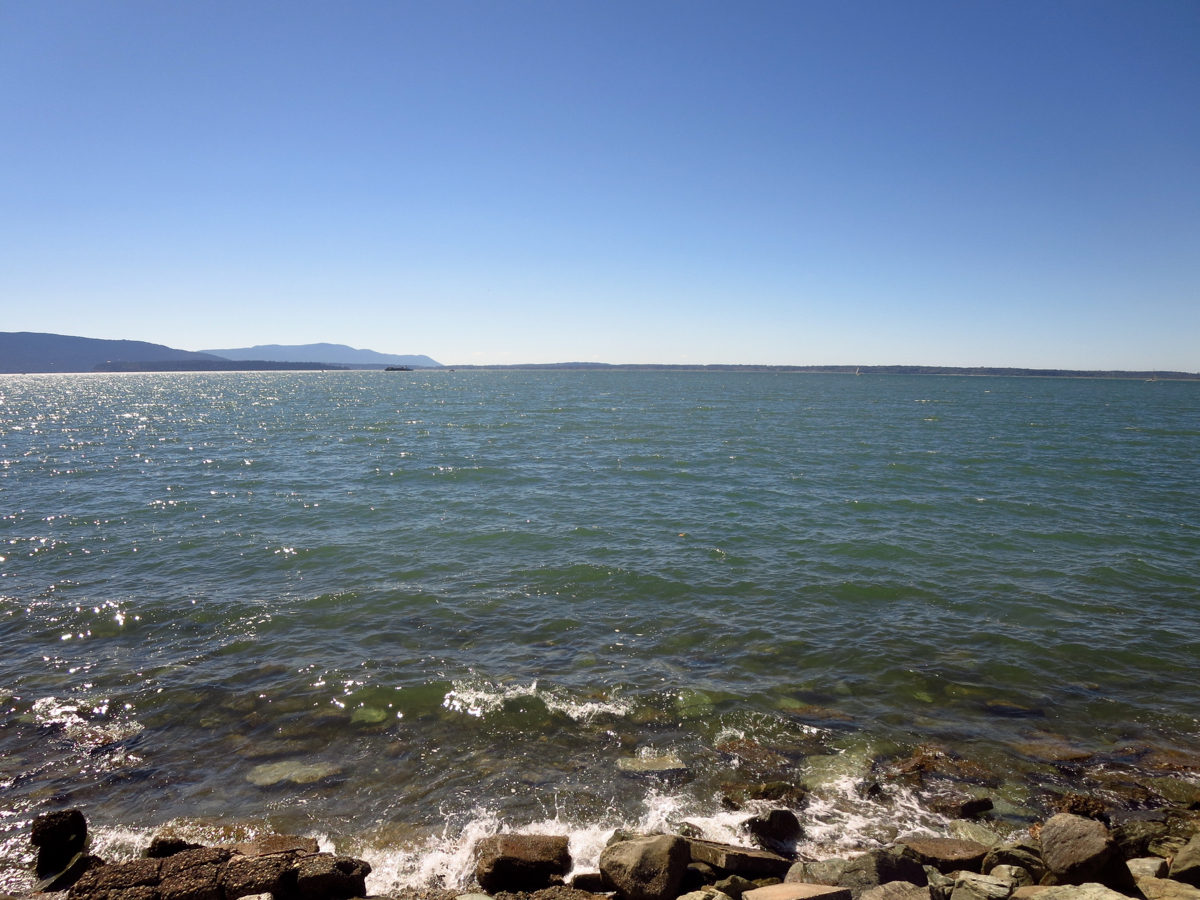 It wasn’t a bad circuit through which to wind up with a none too shabby an office.

So in conclusion, and as I’ve said these last seven years- Kona is a stellar brand made of of equally stellar individuals who’ve all come together in the release of yet another year of stellar product. They have in the last near decade, and as far as I can tell, matured a great deal as a company. In a conversation I had with somebody I compared them to an individual who can both discuss the vastness of space, the complexities of love, while at the same time appreciating the humor of a fart.

As always, I appreciate them for the grace with which they possess these abilities, and cannot thank them enough for continually involving me in their launch as well as keeping me as a friend.

Of all the brands who I could potentially be warmly embraced by, I cannot think of a better one.