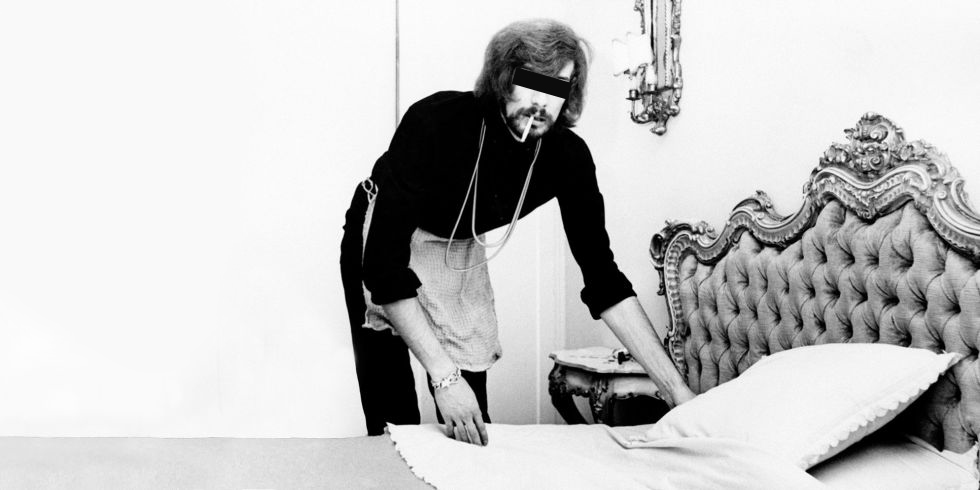 Between begging for votes, and smearing the walls with the standard shade of rapcay, it would seem as tough I have amassed a bit of random, and generally unrelated fodder which I need to knock loose.

So starting at the top, and in no particular order let’s go down the list.

Firstly, it’s no secret that I’m endlessly at odds with dog walkers who insist on leaving piles of their companion’s waste either bagged or un-bagged on the trails. It is the very picture of ignorance and entitlement which often times leaves my rides finished under a cloud of frustration; For what it’s worth, I did pick the depicted bag up and deposit it into the trash can, which should be noted was all of about twenty-five feet away.

“Why not leave it un-bagged and let it biodegrade?” some might argue to which I can only counter with you’ve obviously never been subjected to picking the toxic sludge out of your tire tread or your shoes/pedals.

Secondly, and as I’ve noted here before, it’s a total ecological bummer; 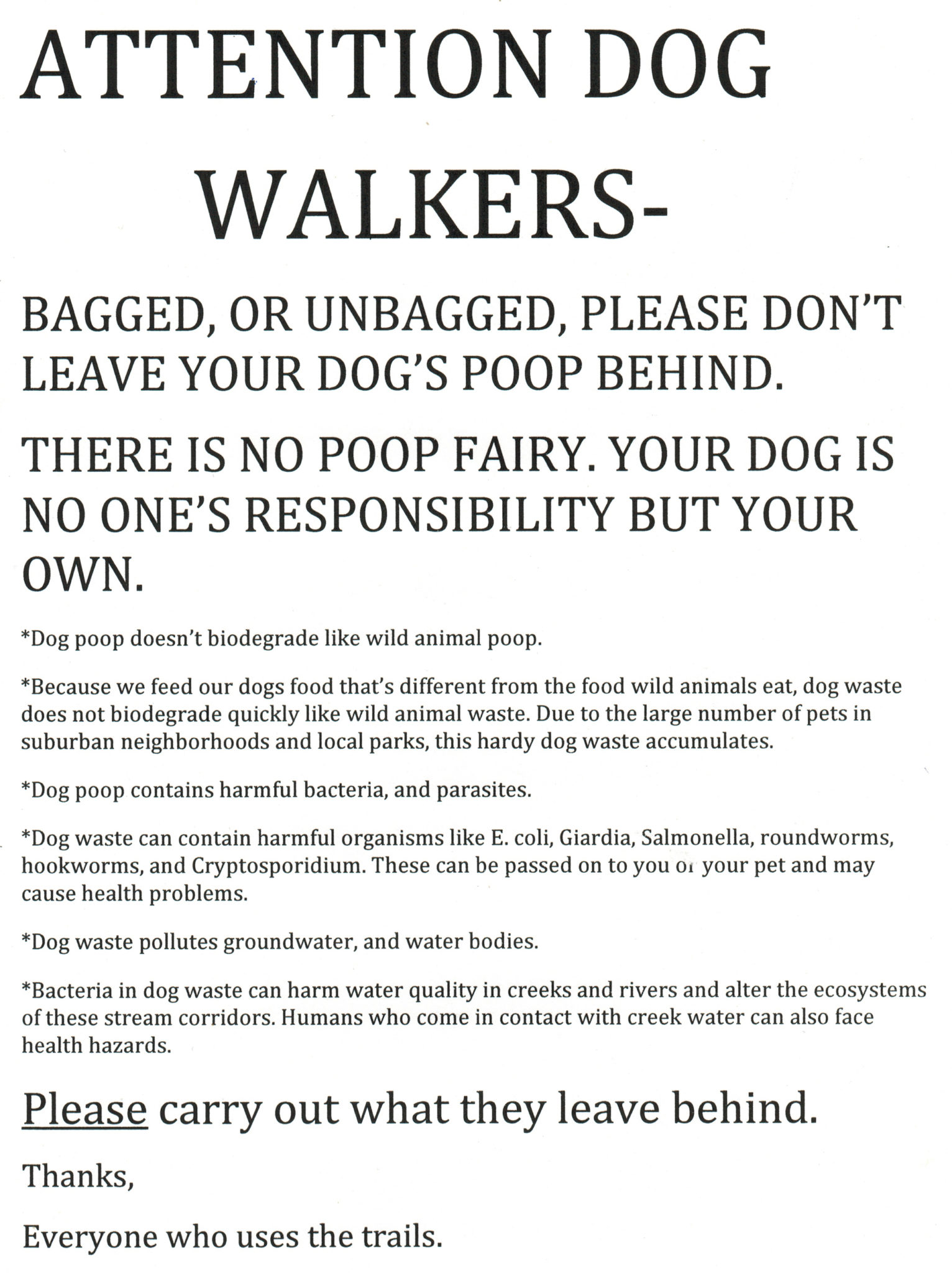 But as I said, it’s the sense of ignorance and entitlement on the part of the pup’s human companion that leaves me utterly stymied.

So my cake was completely taken recently when I came across this article about a New York City resident who saw no problem with washing her dog’s ass in a drinking fountain; Oh, holy mother of all that is right and good, what is wrong with people?

Now of course it could be argued that when using a public drinking fountain you’re kinda playing with fire anyway, but this blatant disregard for absolutely anyone or anything that exists beyond your own gross little world has me slapping my own forehead so hard that I’ve knocked myself out of my shoes and across the room.

It’s with that, that I’ll pick myself up, dust myself off, and attempt at continuing on with today’s post with a soothing ballad by Mr. Conway Twitty;

That makes me feel better.

In other unrelated topics (aside from the fact that the next individual has the same level of loathing for the aforementioned poop bags as I do), young Carl got in touch all the way from Lincoln, Nebraska with some information about an enterprise in which he’s currently embroiled;

I hope all things are well with you, DeMonika, and Buddy. I was wondering if you could do me a flavor? My good pal Vince and I have undertaken a new project, and it would be awesome if you could flash it in front of some of your readers!

The Anylander Pannier is a bag that’s designed around dirt and off road touring. It doesn’t sag (a pannier pet peeve of mine), and it won’t fly off of your rack on a bumpy descent. Also, it doesn’t flop. I wrote up a bit about the bags- the Whats, the Who’s, the Whens, and the Why Fors. You can find it here; 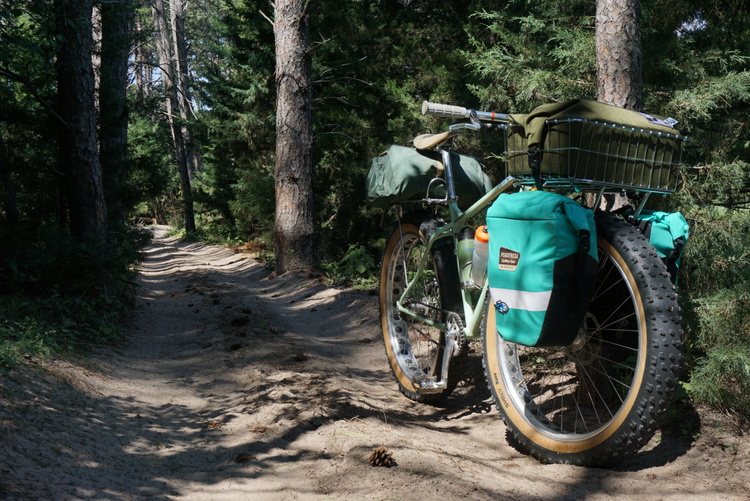 The bags are made by Scott at Porcelain Rocket, who’s an ace bag maker up in Canada. They are $325 per set, and come with the best hardware available.

PS- Headed out end of September to see SW. Only there for a couple days, but lets have coffee with cream?

I’ll be damned if the mere sight of those sacks don’t give me an itch for adventuring.

The good lord knows that Carl is well aware about that which he speaks, and I’d bet dollars to donuts that these packs have undergone an extreme amount of real world testing before he made any of this news public.

If this looks like a thing you or someone you know maybe has been in the market for, give young Carl a line-drop.

Breaking from that for a second, and moving onto matters of a business-ie sort, today is the final day ifin you wanna get in on the current AHTBM shirt of the month;

Get one, or don’t, because for the time being, we still live in a free country.

In news of foolish people doing foolish things, from Cranpa of FBM I received the following clip full of grown ups doing non grown up things;

THIS is a serious video about bikes.

Give it a look!
Thanks!

As I replied to him, both he and his camp really need to learn how to loosen up and have fun. It’s sad to see such a bummed out group of individuals.

In other news of foolish people doing foolish things, not only is the fourth annual Hairnet Ride just kinda around the corner, but I’ve gone and made a flyer for it as well; 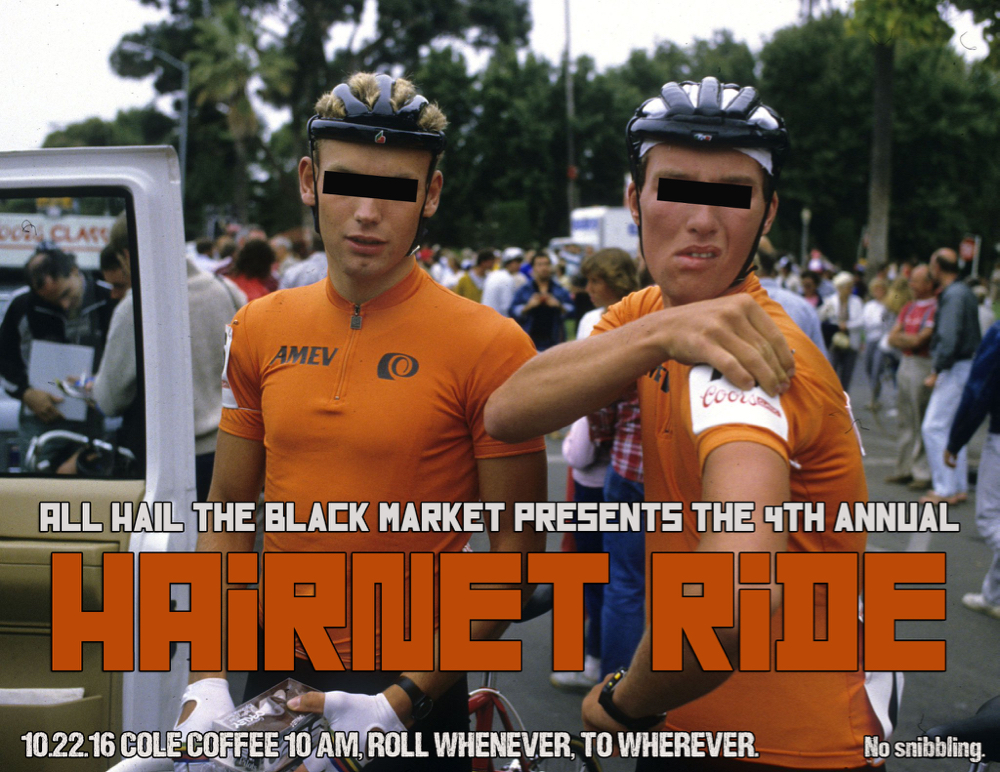 It’ll either be super fun, or it won’t be. The only way you’ll know for sure is if you mark your calendars and show up for it.

Finally, from David I got an email regarding neither foolish people, or foolish things, but rather our insignificant place in amidst all of it;

This might be a tad outside the scope of the wonderful content you’re normally publishing at All Hail the Black Market. With that said, this might be interesting to you, but I’m not sure, so wanted to ask 🙂

A couple folks and I are trying to make a ‘holiday’ to celebrate our solar systems progress around the galaxy. It’s called Galactic Tick Day and here is the site;

From the perspective of the center of the galaxy, we are moving at 143 miles per second. More people should know that and educate each other!

Would you be interested in collaborating in any way, creating content about us, and / or sharing our video?

FYI – this is not a commercial project, just doing it because our scale in the universe is amazing and it’s recognition can have untold positive repercussions for us humans. Also – this note has been effective once!

Hoping that human beings can even momentarily possess the ability to not only look beyond their own noses and recognize such an expansive scope is going to be a neat trick indeed.

But there we have it. Make note of September 20th, and on that day, honor everything that is, and our blue marble’s journey through it, quick before the cosmos shakes the sheets of us all.

9 Responses to “Shaking the sheets.”