It’s Wednesday already and with Labor Day in the rearview mirror, it would seem as though the time in which we get back to work is now.

For your consideration I have four items of note, the first being in exactly two weeks from tomorrow. This of course is the eighth annual Underbike Industry Mixer held in old town Las Vegas, and brought to you by HiFi Components, and VYNL Race Bikes.

Why, I even happen to have an image of VYNL principals, Sophie and Sean that I took during a visit earlier in the summer with two of them and their bikes decked out in HiFi goods; So anyway, like I said previously, we’ve joined forces in this year’s edition of the party, and it’s going to be a good one; Every year I get asked roughy the same set of questions regarding the event;

A) To gain entry does one have to be employed in the bike industry?

B) To gain entry does one need an invite?

C) Is there a cover?

The answer to all three being no, not at all, and not in the least.

The only requirement is that all attendees should arrive with a plan to have fun, and though it’s not a specified component of the event, the theme this year is ‘The Black and Blue Ball’, so if you wanted to come dressed like so; You’d probably score some sweet street cred, and then most likely close the night out with legions of adoring admirers.

Of course it should probably go without saying that on the night in question we’ll be treated to the big rock and roll sounds of the almighty Who Rides The Tiger; 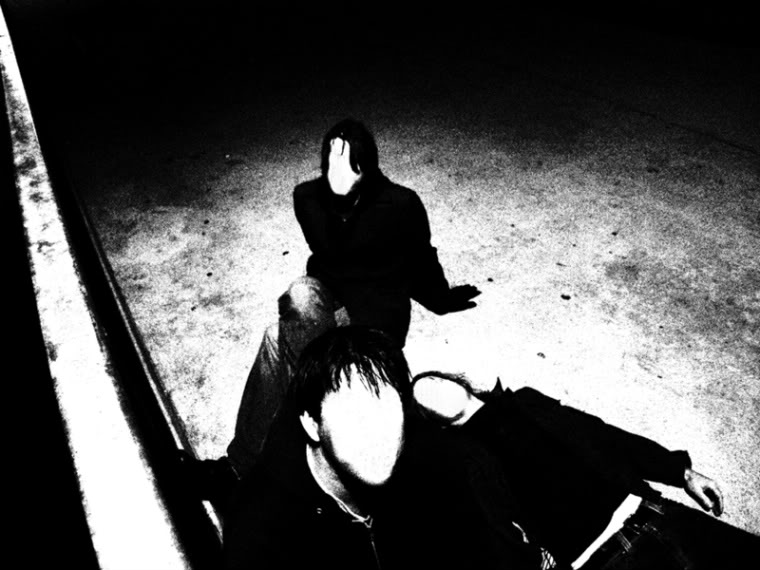 This was a band I fell hard for about ten years ago, and ultimately not only became friends with, but ended up releasing a record for last year; Lastly, it might serve you well to remember to bring a set of ear plugs, because chances are better than good that it’s going to get loud.

Then, on the heels of that, and once the Vegas dust has barely settled, right here in the Bay Area we have the second annual ‘BLUEBERRY II- Another PBR influenced art show’.

I don’t yet have a flyer for it- (that should arrive at some point today).

In light of this, I will simply post this as a placeholder, because I suspect James Montgomery Flagg and his (studio manager? Muse? Wife? Model? Parole officer?) are picking up what I’m laying down; Last year I was one of three winners, and as such was tapped to help curate this year’s event which will happen at NWVSF, and based on current intel will be chock-full of some really amazing work made my local artist types, such as these pieces submitted by Amanda Fox; 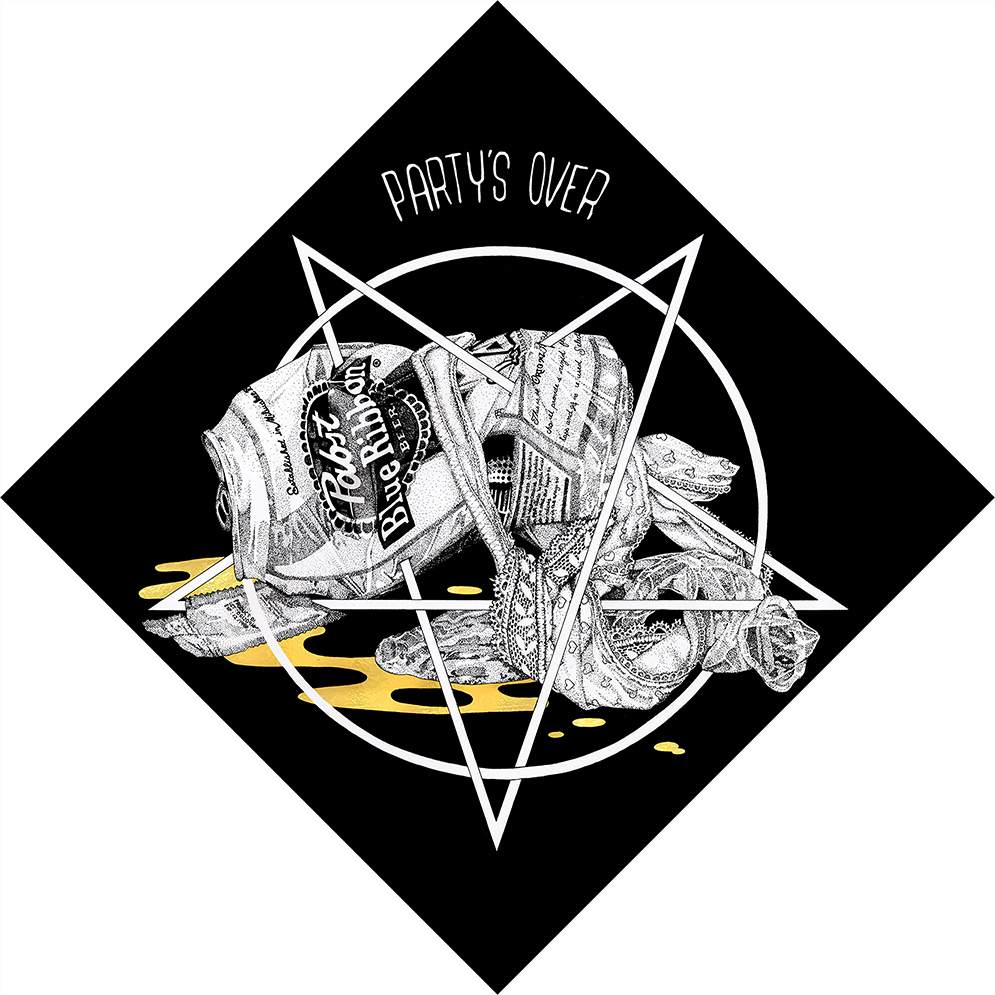 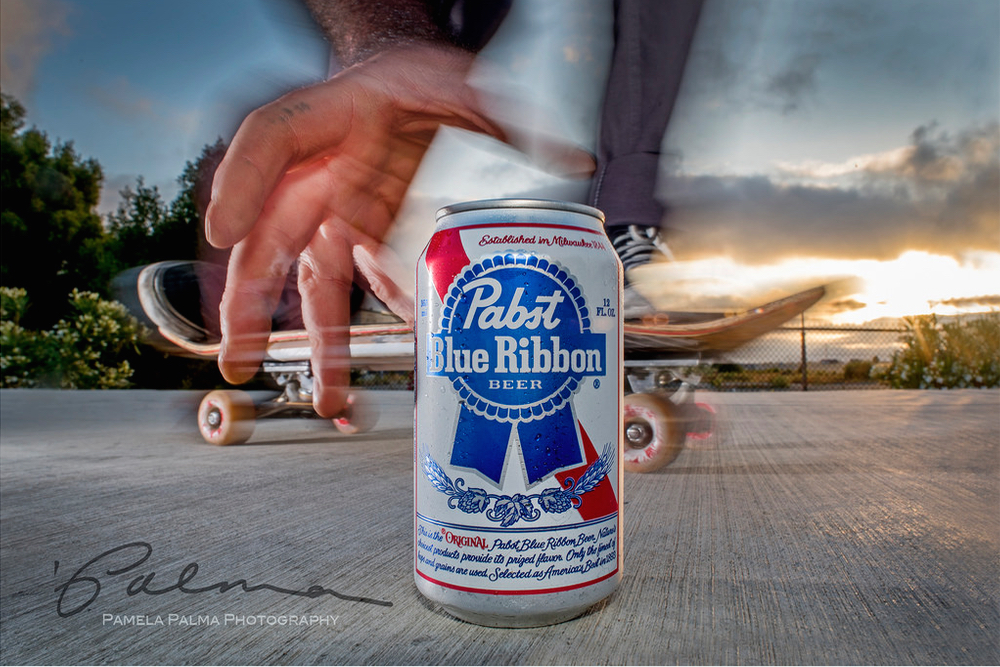 -and of course, my own personal hunk of junk; At last count there were somewhere in the neighborhood of thirty artists contacted, so there will either just be the aforementioned pieces (because art types are flakes), or the walls will be absolutely covered with a feast of PBR related eyeball delight. Make a note, and swing through for some free cans.

Then, as we flip the page of the calendar and we move into October, I will poach my own Instagram feed, and use an introduction I penned two weeks ago; Bernie’s artist statement about this installation goes as follows;

It’s safe to say that this particular collection of photos wouldn’t exist if my childhood home had been anywhere else. As it happened, my neighbor built a small kickturn ramp in his driveway in the late 1970’s, which eventually morphed into a monster half-pipe in his backyard. The epicenter of local skateboard scene was right next door, and an emerging punk music scene came with it.

There was a revolving cast of characters there every day, all were some combination of creative, crazy and bored. I absorbed the soundtrack and the energy from the side of the ramp for a time – but staying on the sidelines wasn’t encouraged. They would cheer me on as my kickturns got closer to the top of the ramp. The same group would later prod me and my bandmates to start playing shows after only a few practices. I followed their lead by pasting together my own zines. The prevailing ethos was: create (something, anything), share it (why not?), and do it (yourself) again.

My dad had built a darkroom in a cramped space beneath the basement stairs where I spent hours upon hours developing film and printing my pictures of skateboarding and music, picking the best to be published in my zine. With some luck, I was been able witness great music and skateboarding and managed to capture some moments worth sharing. Over time, the camera was coming out for music and skateboarding less and less; but recently, more and more. I am rediscovering that joy of creating, sharing, and doing it again, just as I had learned from some of my favorite teachers in my neighbor’s backyard.

This is an archive of sorts, but really it’s a collection of debris: scattered fragments each from a particular time and place which have been stored away in a cardboard box for a few decades. I feel lucky to have the chance to share them now.

So might I recommend you take a red pen and circle the 14th of next month? I promise it will be worth your while.

In closing, in news of random (or as in the case is for this next one, randumb) events, and on down towards the end of October, I’m proud to present the fourth annual Hairnet Ride; In years past we’ve done big milage, and little milage, and who knows what this one might be? One thing I can guarantee is that there will be lots of laughing, and rolling slowly, and rolling quickly, and snacks, and booze breaks, because the way I see it, we all have 364 other days in the year to try and tear our own legs off. I’m a proponent of taking time to smell the roses, and joining like minded derylicts in that process.

We will reflect on fallen comrades, previous rides, and ones we’ve yet to have. We’ll share war stories, and tell jokes, and perhaps even take time to expel some closeted skeletons. There will be laughter and there might be tears, because the bottom line is that as thoughtful human beings, joining forces, and attempting to help offer the universe and ounce or two more positive vibrations is a small effort in which we all deserve to take part.

Perhaps to most it might seem just like another silly group ride, but to me it’s become much more.

Likewise, with all of these events it’s my ultimate hope that people can walk away, and for at least a little while anyway, simply feel good about life.

Maybe the result won’t be people dancing in the street, but it’s a start.