While I was in San Diego I both came and knocked on a door, as well as took a step that was new; 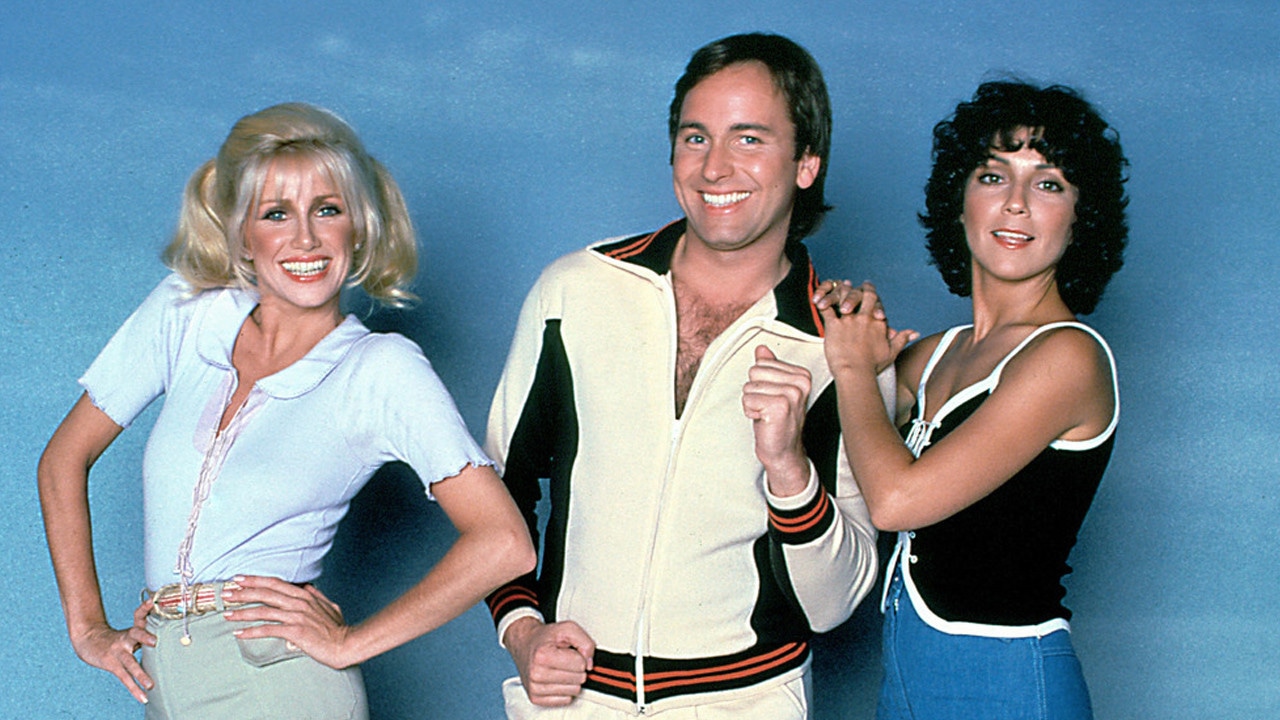 Because we all know the adage regarding ‘when in Rome‘.

As I mentioned in this post, I skedaddled on down to the southern corner of the state after my old pal Dan from Campagnolo shot me a text in September inquiring if he got me a ticket for the Rocket From The Crypt Halloween show, would I be able to come down.

Being that Rocket is one of my all time, very most favorite bands even in recorded history forever and ever amen, naturally I said yes.

On my first day in town, I did what musician and cyclist Ben Harper once declared to be of vital importance when visiting cities, and got lost. I walked around the city until I didn’t know where I was, and then I continued on, darkening various doors of bars and cafes and jotting down random drawings in my sketchbook along the way.

Finally, sensing that it might be about time to return home, I pointed my cloven hoofs in that direction and eventually found my way there, where I was met by Dan and his wife Alicia. We chilled out for a spell and got to plotting our various costumery. The evening’s festivities were to be held at a legendary place at which I’d never before been called the Lafayette Swim Club and Hotel; 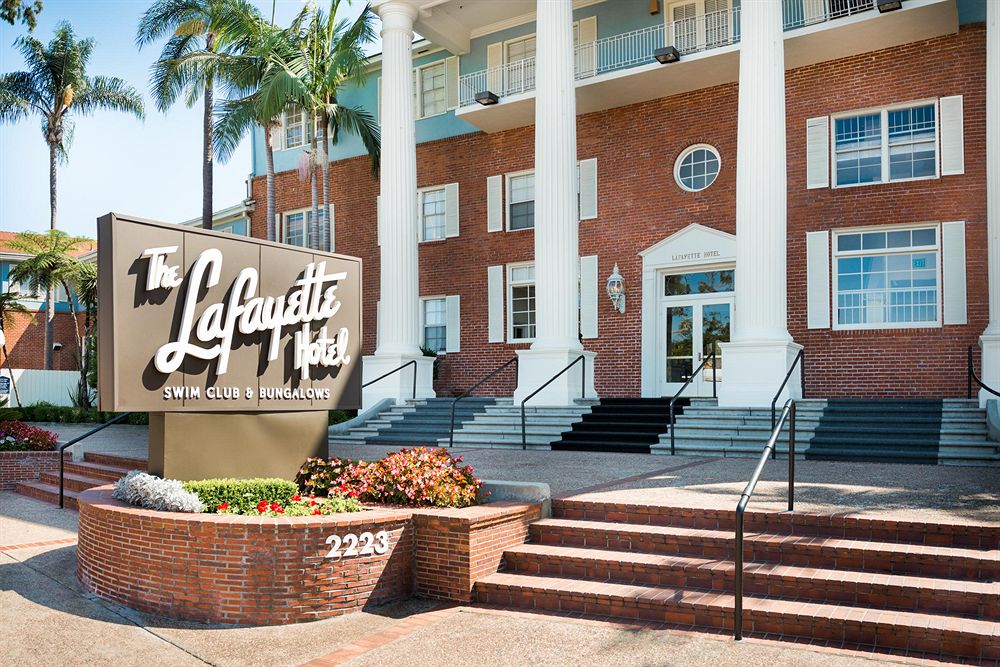 Historically, I’ve not one who was very adept at dressing up for the Halloweens, however this year in particular I felt inspired, and donned my best Garry Scott Davis; 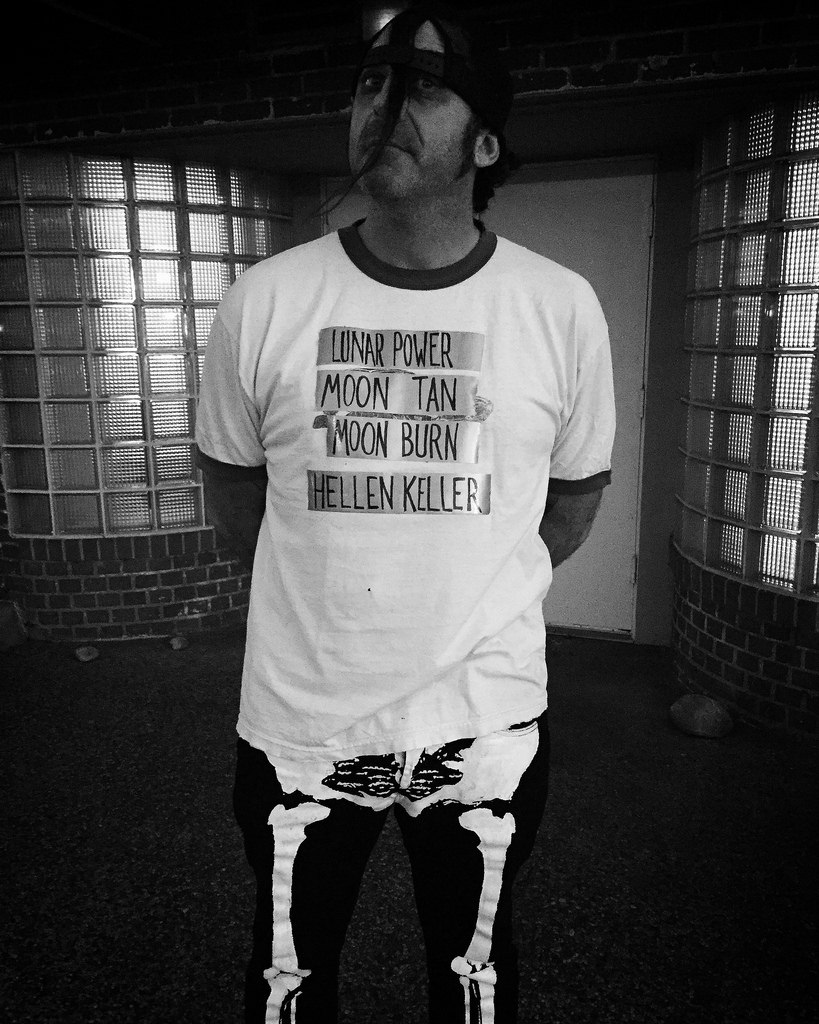 I saved a little duct tape to cover my face in order to round the costume out, but that plan got shelved once I began to imbibe.

Before the show started, we headed to The Red Fox Room, which I came to understand was made famous by Ron Burgundy and his flute;

There we ate a meal of the sort of fare you might have enjoyed with your grandparents in the 1970s.

We reemerged from the restaurant to find hundreds of similarly minded individuals who were dressed to impress, which I ham-fistedly documented with my phone; 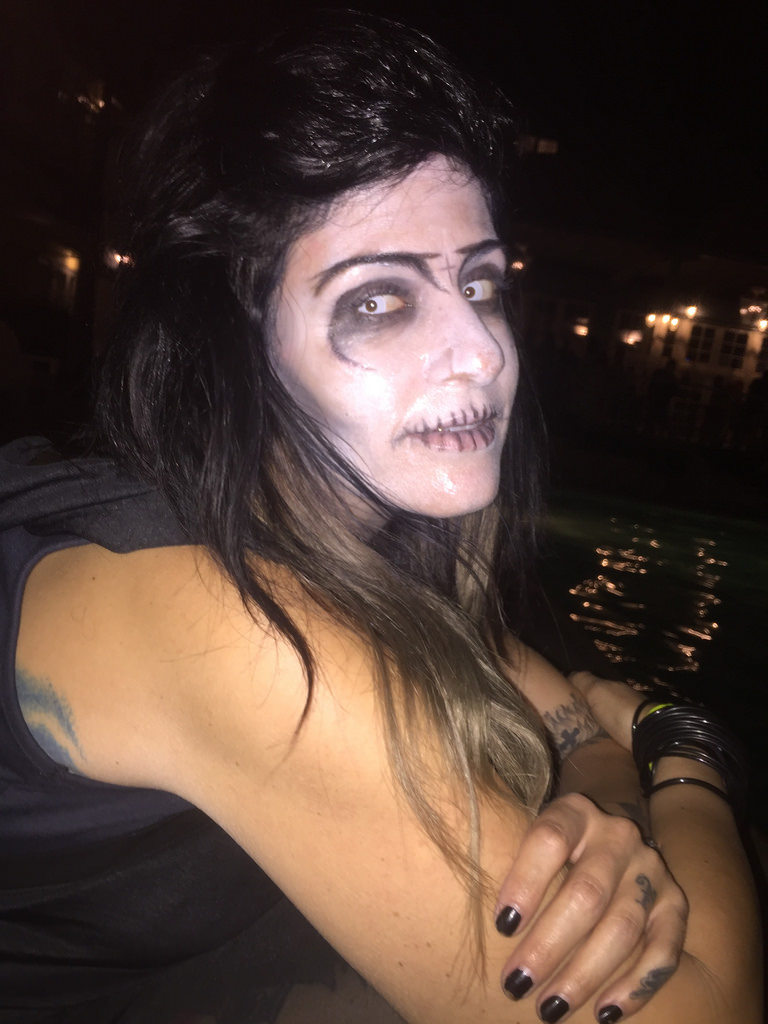 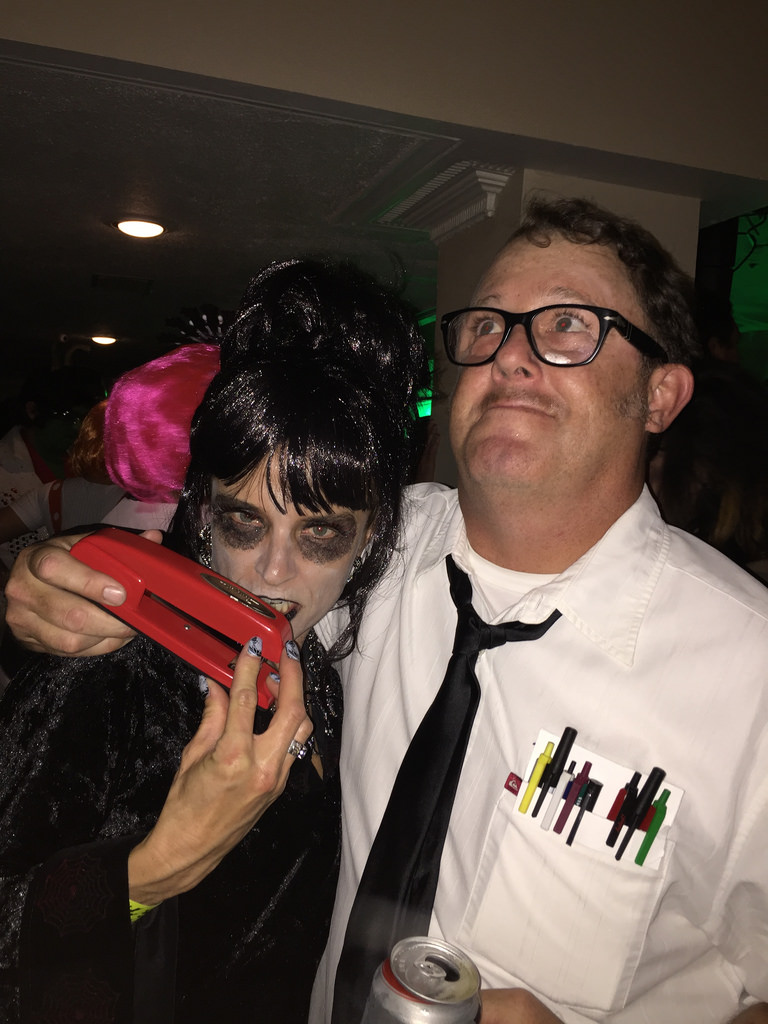 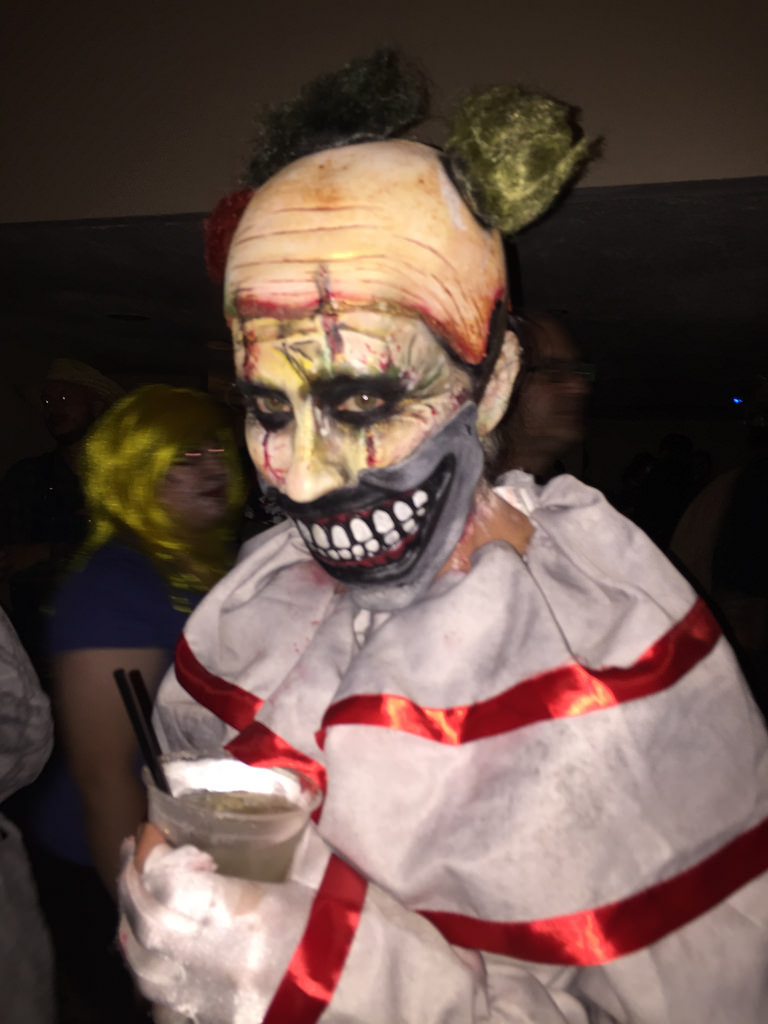 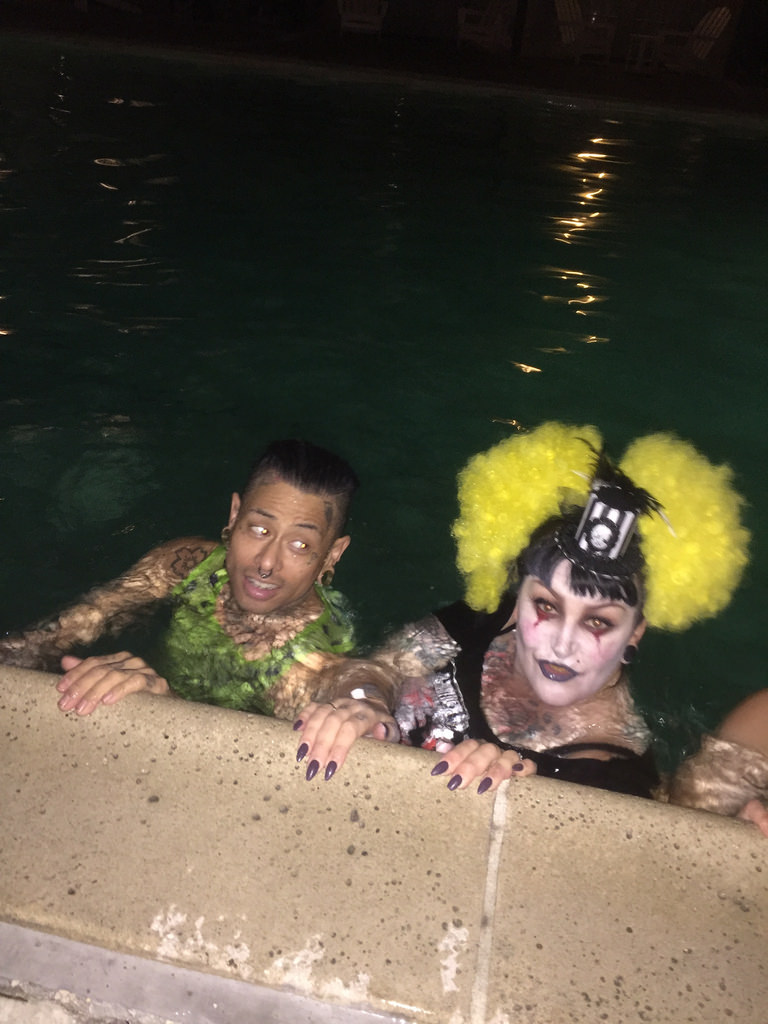 We milled around, slapped hands with old and new friends, caught a couple of the opening bands, and drank drinks, before returning to the basement to catch the featured act; 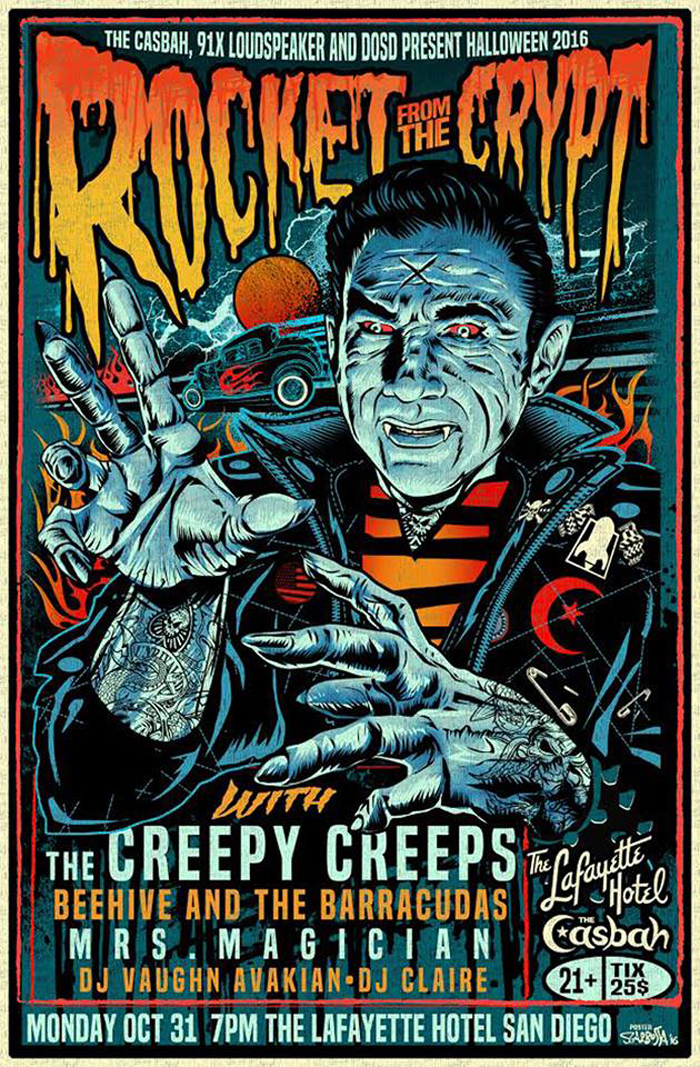 Was it loud, did they play everything any proper Rocket fan could hope for, and did I dance my ass off until I had literally sweated through my skeleton pants? 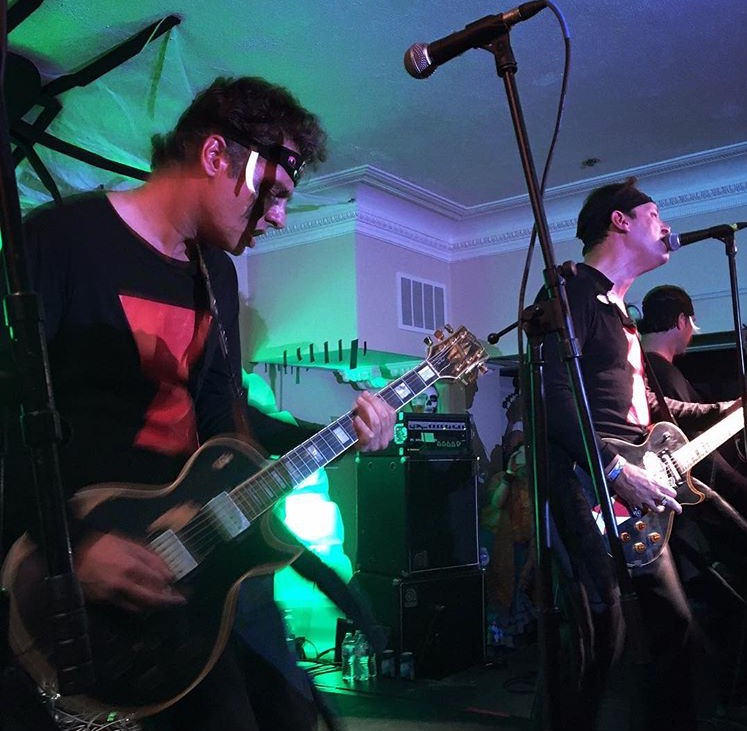 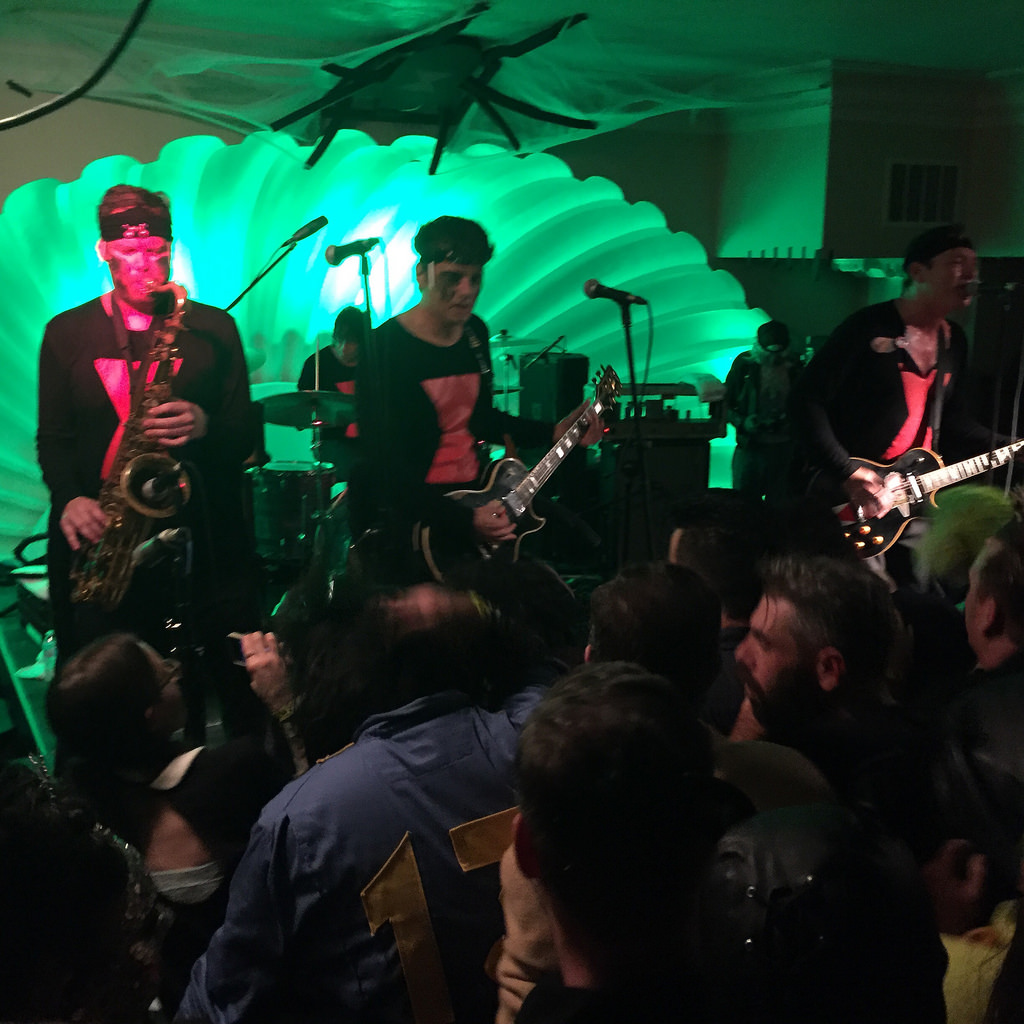 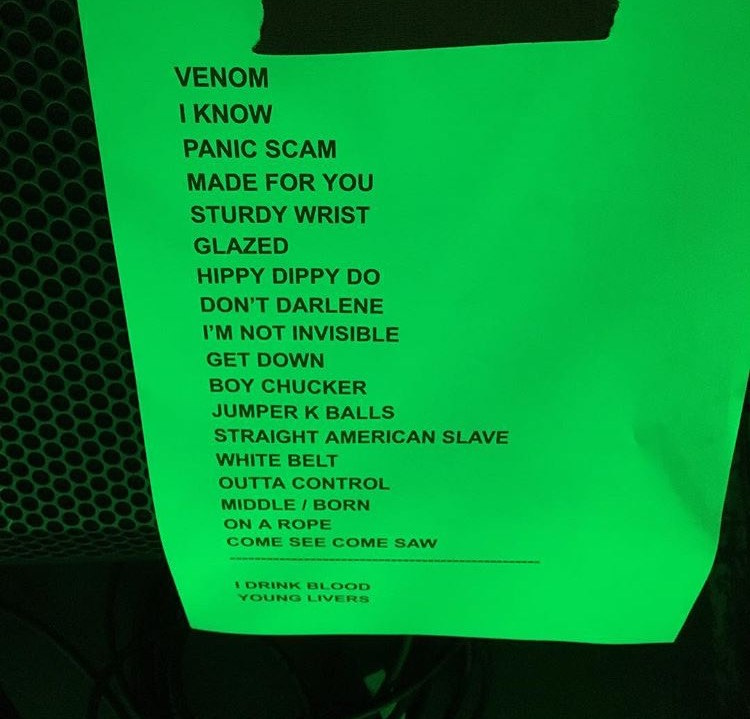 Yes indeed it was, they did, and I did with a fury.

It was a party for the ages, which I concluded by laying on the ground, and getting ass shakered upon by an anonymous party attendee; If my particular version of Heaven had a face, it would be that of the night in question, and I thank all who took part in making it so.

Now then- With all of that mumbo jumbo off the plate, there are a few other matters to which we’ll now attend.

Firstly, from Jeff out there in Minneapolis, I got some notification about an upcoming messenger flavored event that’s occurring in order to help raise funds for the 2017 Milwaukee NACCCs;

Just wanted to send you the updated event flyer, which is basic, simple, and sweet just like all my race flyers. Some would also call them cheesy but that’s how I like them; 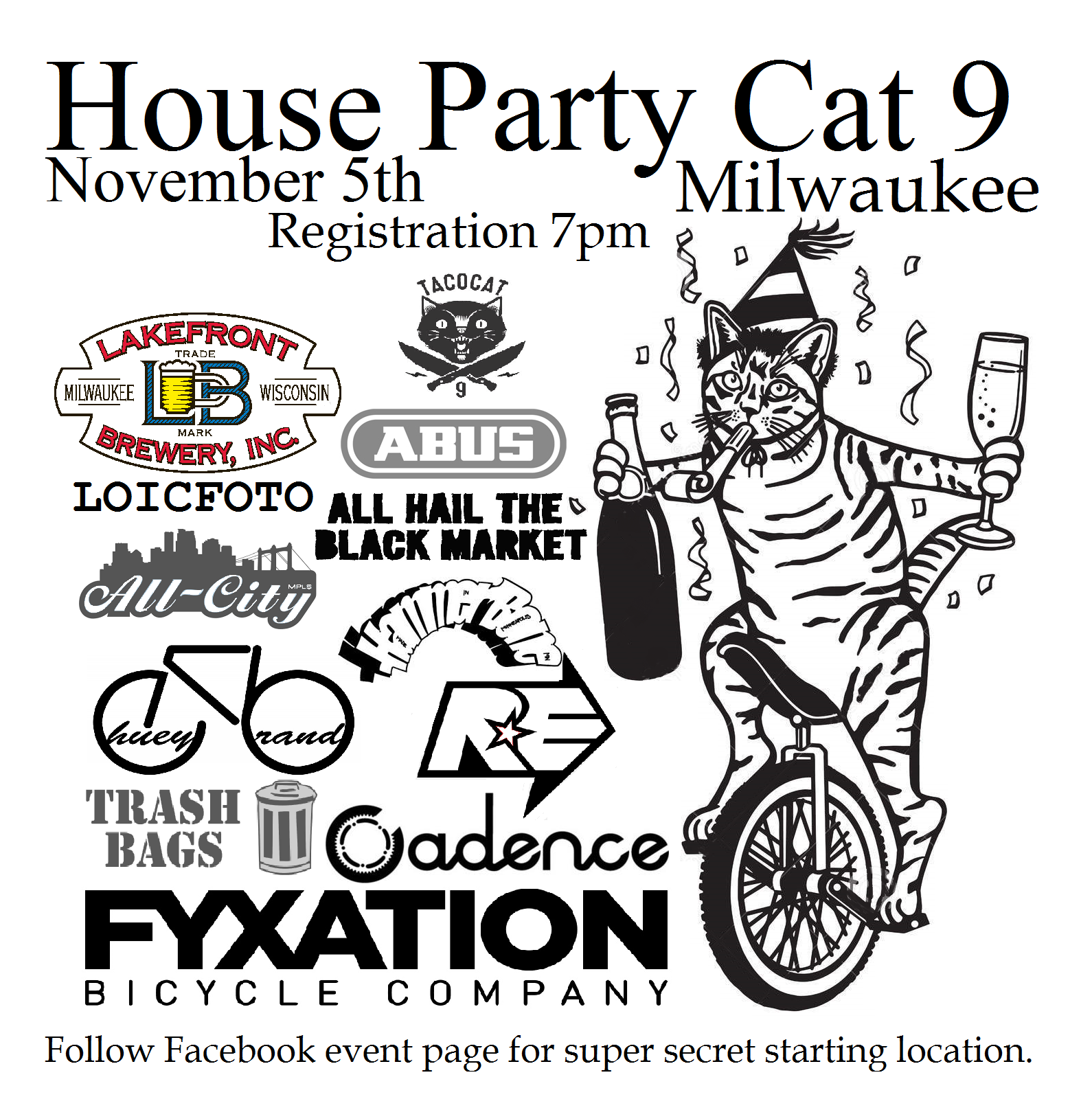 If you’re wondering why the location is not listed its because, 1 – I’d rather they see the event on the Facebook page so they can get more information on the event, 2- it’ll bring them to the page and they can then follow the sponsor posts to your websites and 3 -as most folks know, these things aren’t officially sanctioned races so I’d rather not have the information out there for just anyone to see.

So thanks again for donating prizes and helping me host this thing again for the 9th year. After the race is over I’ll collect all the best photos I can and send you all a race report about how everything went down.

So to all friends, acquaintances, enemies, and frienemies alike, this event will for sure be one in which to take part, and will most likely serve as a satisfying appetizer to the eventual main event.

In other news way back over here on the left coast, I was contacted by a woman named Phoebe In Seattle who is diligently working in the trenches to develop support for Portland’s Forest Park. It seems as though she’s helped to organize proper event to raise funds, awareness, and access, which she detailed in a couple of emails that read like so;

I’m putting together this event with Columbia Sportswear, and am working with Forest Park lovers in Portland to attend and help get the word out. At the party people can learn how to ‘Find Your Perfect Hike’ with Columbia at the Gear Up Give Back event at on November 10th; 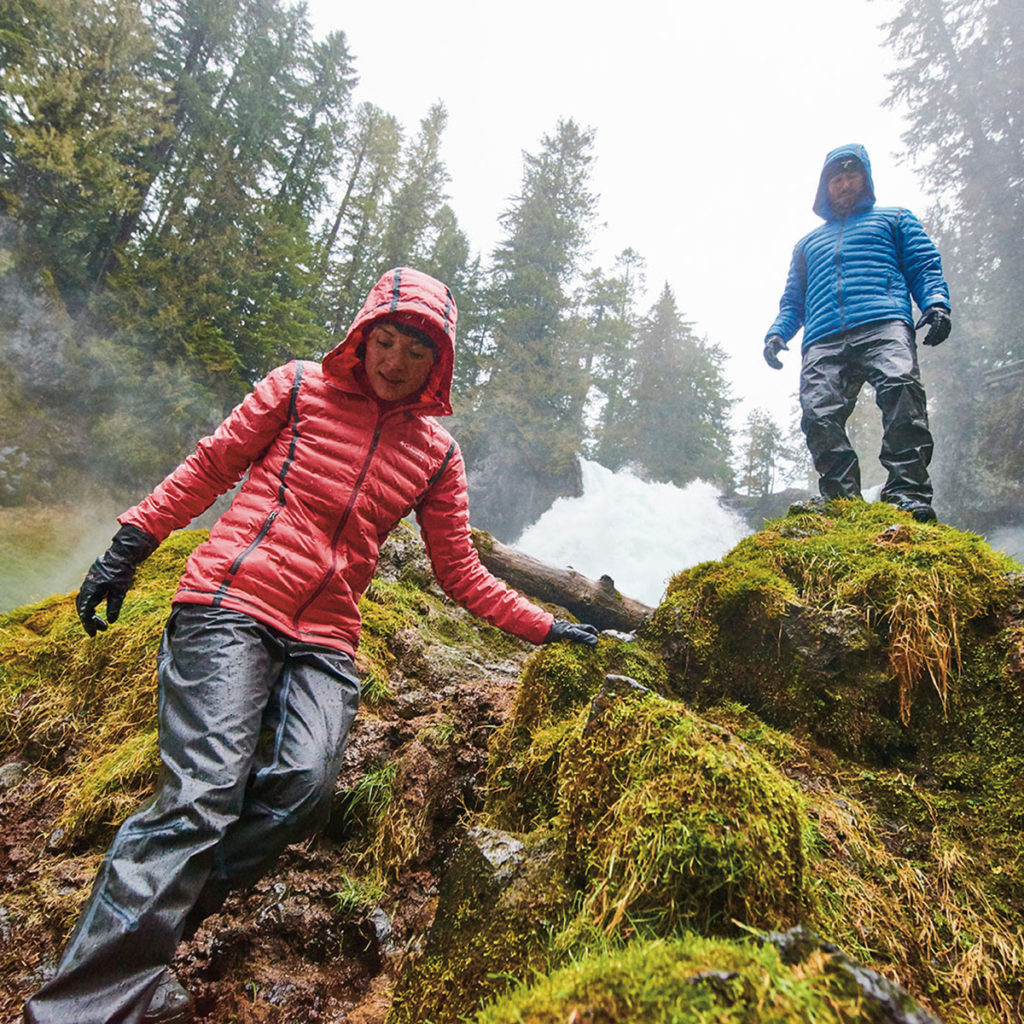 10% of sales will be donated to Washington Trails so come learn hiking tips from while enjoying beverages from Seattle Cider Company, and Two Beers Brewery as well as live music, and tasty bites from 5-7PM while shopping for Fall and Winter items; 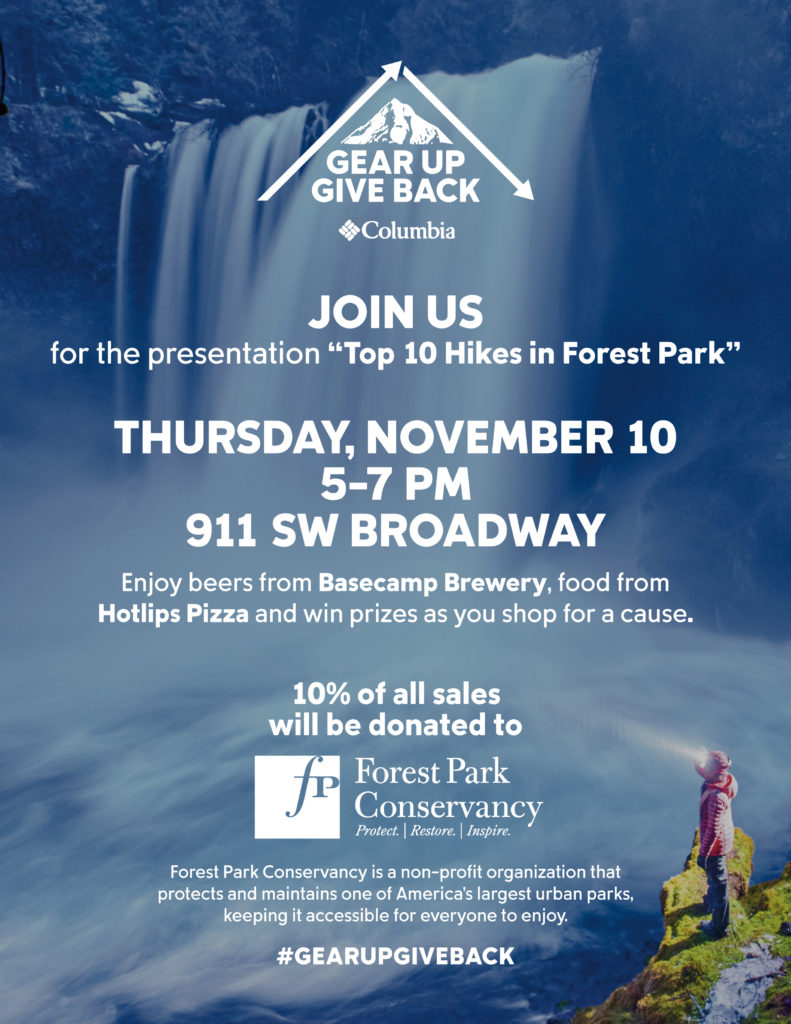 We’d love to have you post about the event, attend, and invite your network. I’m aware of the tension between cyclists and the Forest Park Conservancy but wanted to ask in case you might be interested in forging an alliance 🙂

So there you have it. Like Phoebe, I too am aware of the tensions in Forest Park, and as a cyclist who has on many occasions enjoyed the vastness and beauty of the park, I’m all for doing whatever small part I can to help promote what she’s doing, because at the end of the day, the health and well being of open space is what we’re all trying to achieve and maintain.

Plus, I’m a sucker for any email that ends with a little smiley face.

Finally, in closing I’ll now conclude with an email that involves no smiley faces, but rather a bit of imagery that’s perhaps not for the squeamish among us, though helps to solidify the sender’s final point;

I just had to share the topsy-turvy world of mine for the last few weeks.

On my way home from work on September 28th, I was involved in a crash. I have no memory of the incident, but the 911 call, along with all available evidence, points to a hit & run.

Unfortunately, the cops who were in charge changed the classification 50 minutes after I was scraped off the road to “stick in spokes.” Yeah… 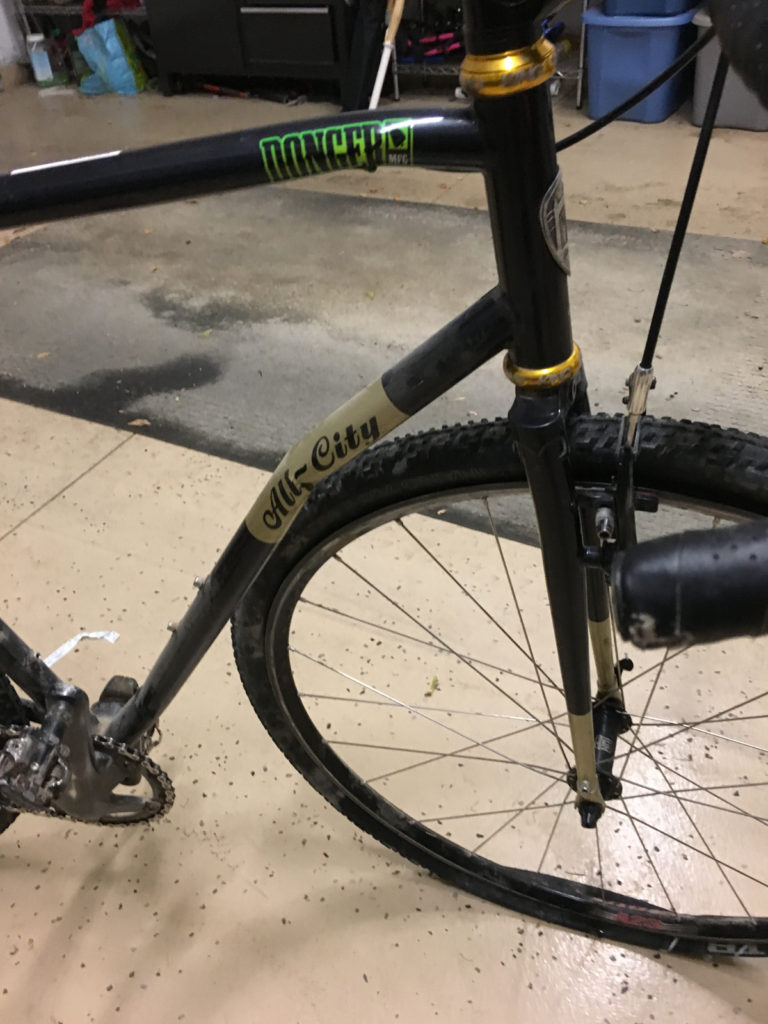 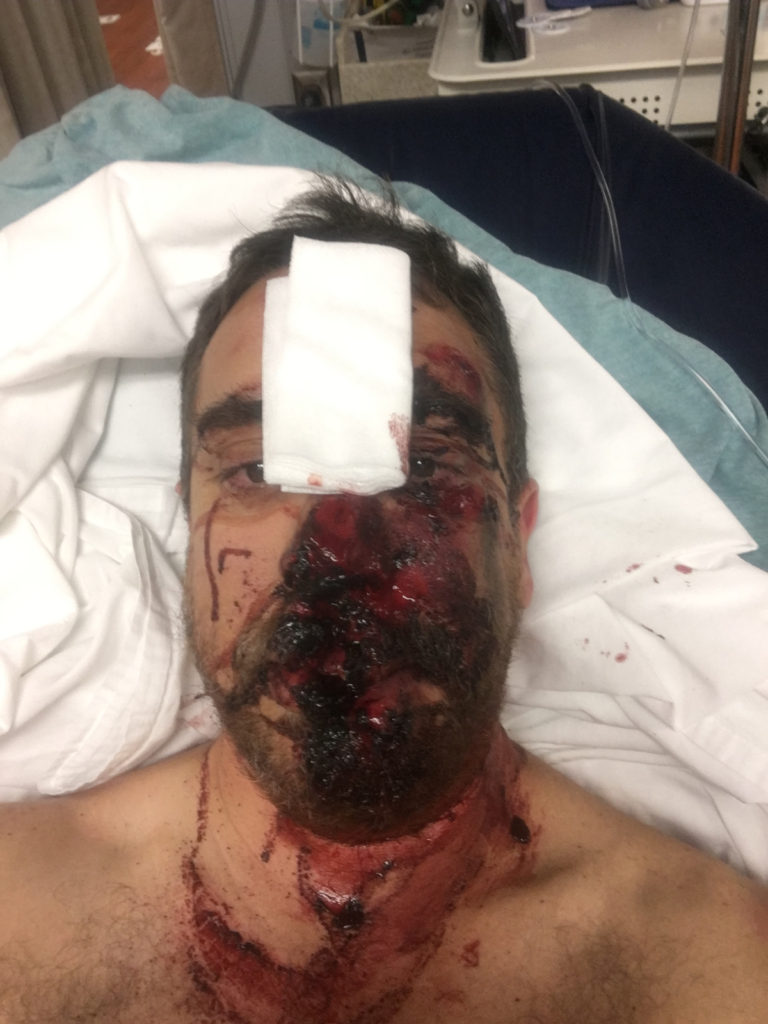 Luckily, I was wearing a helmet, so I’m alive and have use of my (not that fantastic to begin with) brain. 4 hours of facial reconstruction to patch my sorry mug back together, and I’m good. Well, except for the shattered upper jaw and broken front teeth; Anyway, oral surgery, cadaver bone grafts (see? I really AM kinda dead inside!) and 6-12 months from now I’ll be able to get dental implants.

The downside is that my beloved All-City Nature Boy Zona is dead. Kaput. No longer among the living.
So last week Jake, the “captain” of the “team” that I “race” for (Donger Manufacturing-Donger For Life!!!) texts me and says he has something for me, and asks if I’m going to be around over the weekend. Saturday rolls around and he shows up with Thomas, my friend from a shop I worked for the last couple of years. And this- 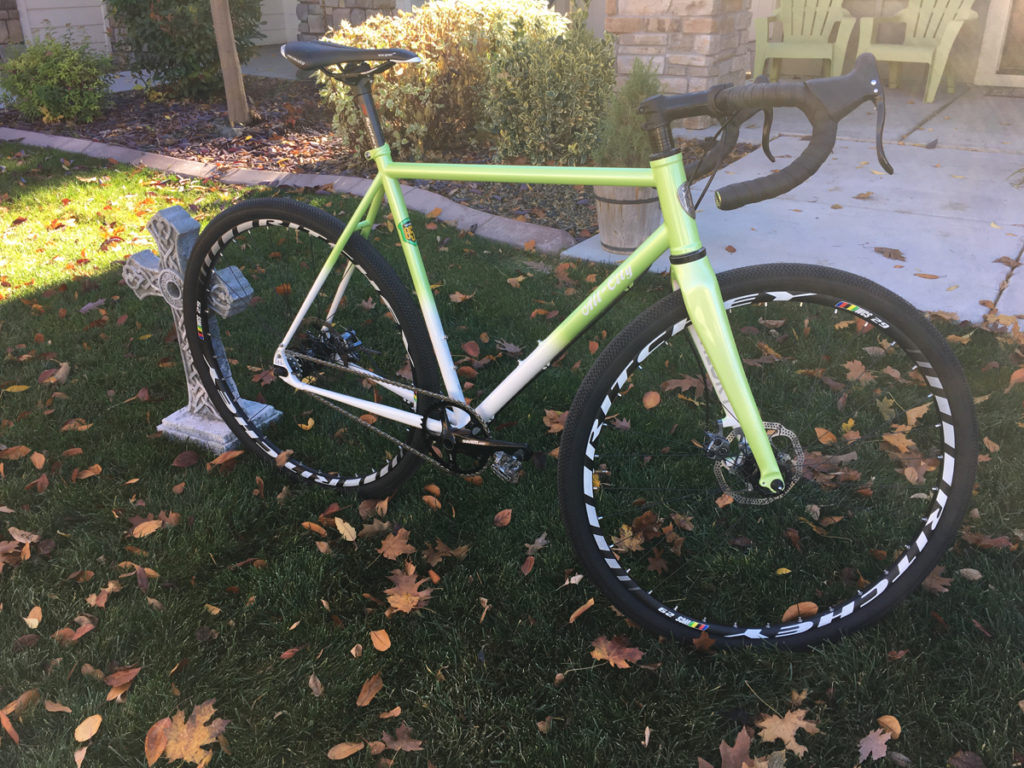 All of the sudden, I must have had an allergy attack, ’cause my eyes started watering real bad. Who am I kidding? I was weeping openly like some sort of sensitive guy.
Apparently Jake and Thomas organized a bunch of people to pitch in and replace my bike. Not just teammates and former coworkers, but all sorts of Boise bike cyclists that I hardly know.

It’s an incredible feeling to know that your friends have your back, but knowing that the rest of the cycling community does, too? That’s something else entirely.

See what I mean? Looking at the busted mug ain’t an easy task, but the upshot of it is that the wagons were circled for homie, and the good feelings of the outcome will last long after the scars have faded.

Like Jack, Janet, and Chrissy, (not to mention Larry, Ralph, Helen, and Stanley), we exist in a realm of people who are quite adept at looking out for one another.

We’re lucky we have way more in our company than just three.