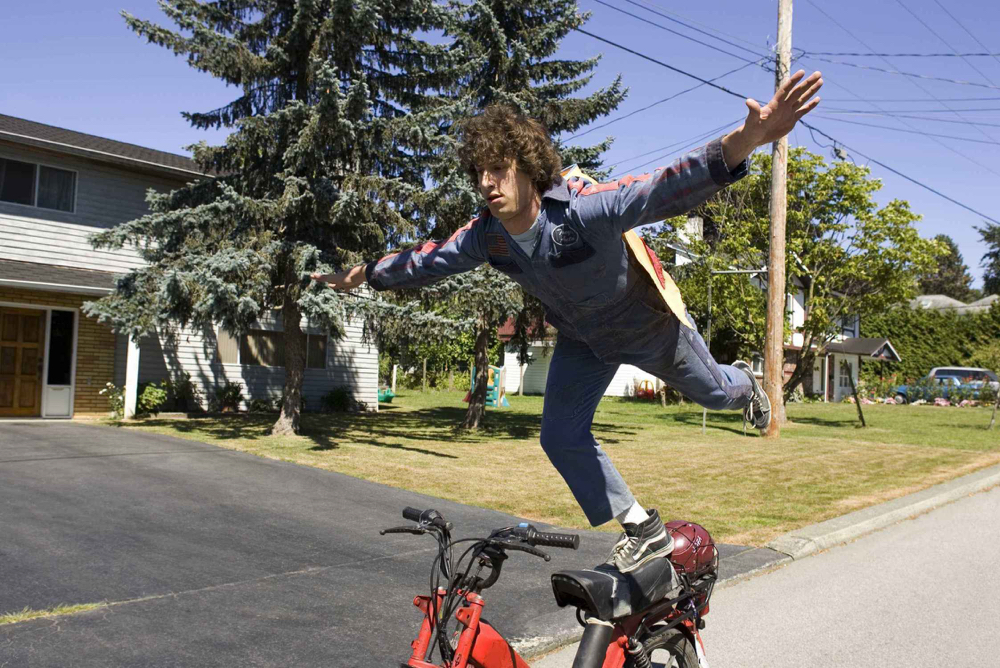 Firstly, and most importantly, have you seen the epic cinematic triumph that is ‘Hot Rod’?;
https://www.youtube.com/watch?v=2r-fntp5Nnw
If so, then you should watch it again. If not, why on Dog’s green earth not?

When I was in first grade, there were three viable career options I saw eventually fulfilling. An artist, a professional football player, or a stuntman.

And here we are four decades later and I’m not really any of the three.

The lesson here being never give up on your dreams. Or as soon as they become challenging, do.

With this theme in mind, though I never got paid to be a stuntman, as I noted on Wednesday, I’ve at least found my possession of one; 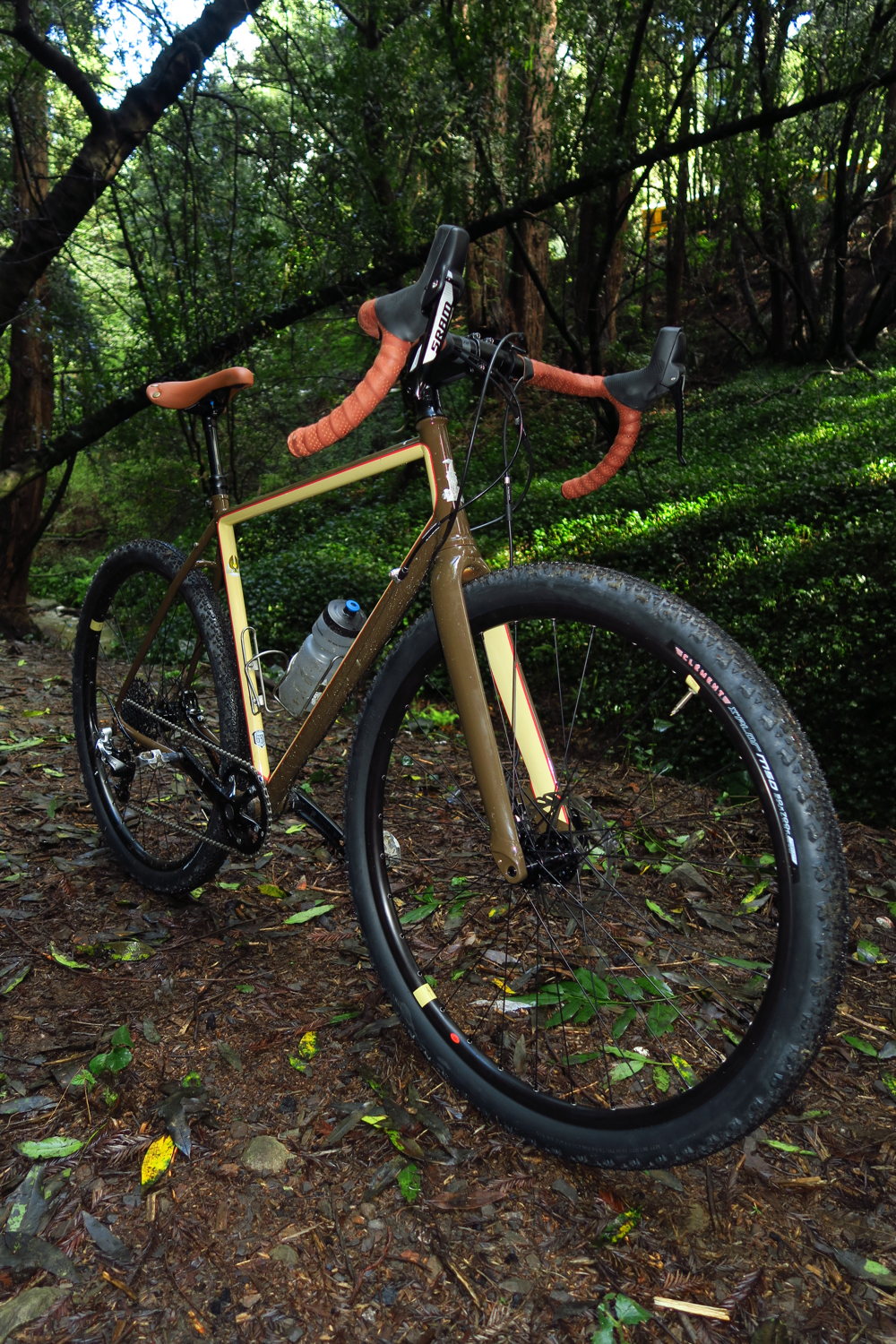 This image here of it positioned in the woods should serve as an indicator that I finally left my basement with it, and actually put rubber to (dirt) road.

Upon my initial ride, I had a gas. Of course, you (or maybe just I) can never really turn the screws on a bike until I get fully comfortable on it, but out of the gate, I felt quite at ease descending technical trails, rain slicked roots, double track, and with the 1×11 11/42 cassette gear spread, climbing required less effort than choking back anger every time I read an article about ‘President’ Combover McDumpsterfire; 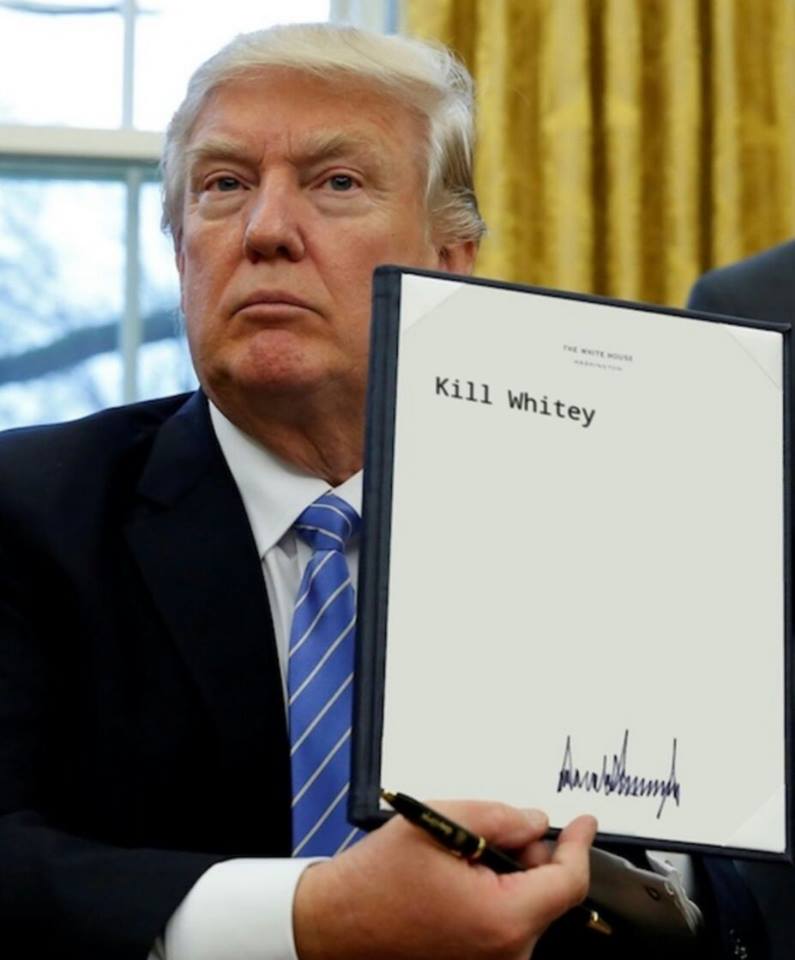 Why, during our time together, I even shot a short clip of me doing a kick-out on a little leaf;

It only took me five try to get that right, and not fall into the creek that I later found had only two days previoulsy suffered the addition of 38,000 gallons of raw sewage from a broken poo artery.

So all of that said, it is indeed a super fun bike and I look forward to many more adventures together.

Also, thanks to Aaron from the ROTS Army it’s come to my attention that no matter how nicely you ask, Raleigh won’t extend the same consideration that they did to me; 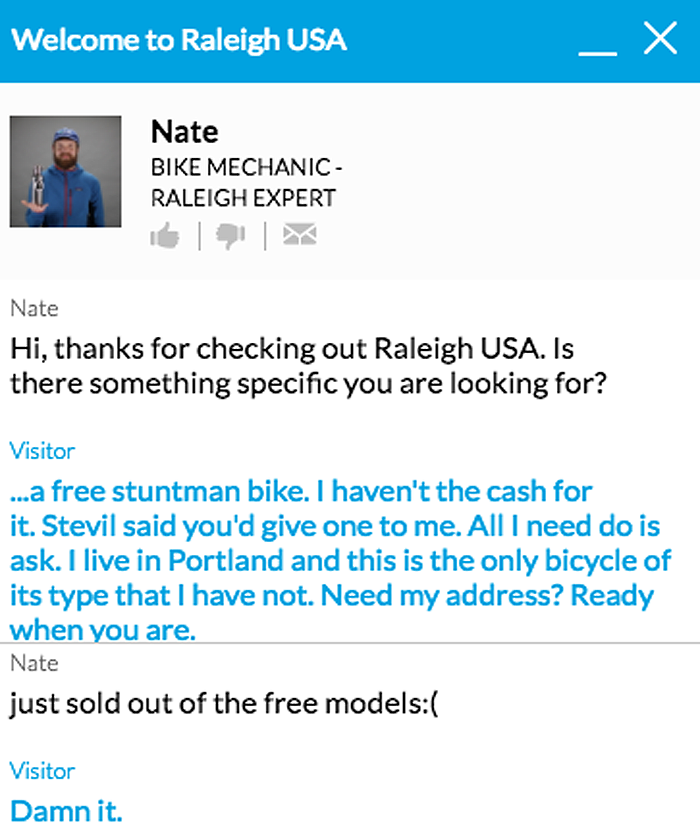 Basically, any time you click on the Raleigh site, Nate appears and asks if there’s anything you’d like a hand with. He and I have had a nice chat, during which time I said I’d imagined him in a basement room lit by just a single bare bulb, answering a daily onslaught of questions regarding cable weight or BB height. He replied that I wasn’t far from the truth, and though he doesn’t have immediate access to a stress ball, a punching bag is not far away.

He also mentioned that he’d recently finished a pinewood derby car in tribute to Colt’s truck, which upon temporarily being released from his basement confines, he then emailed me a few photos of; 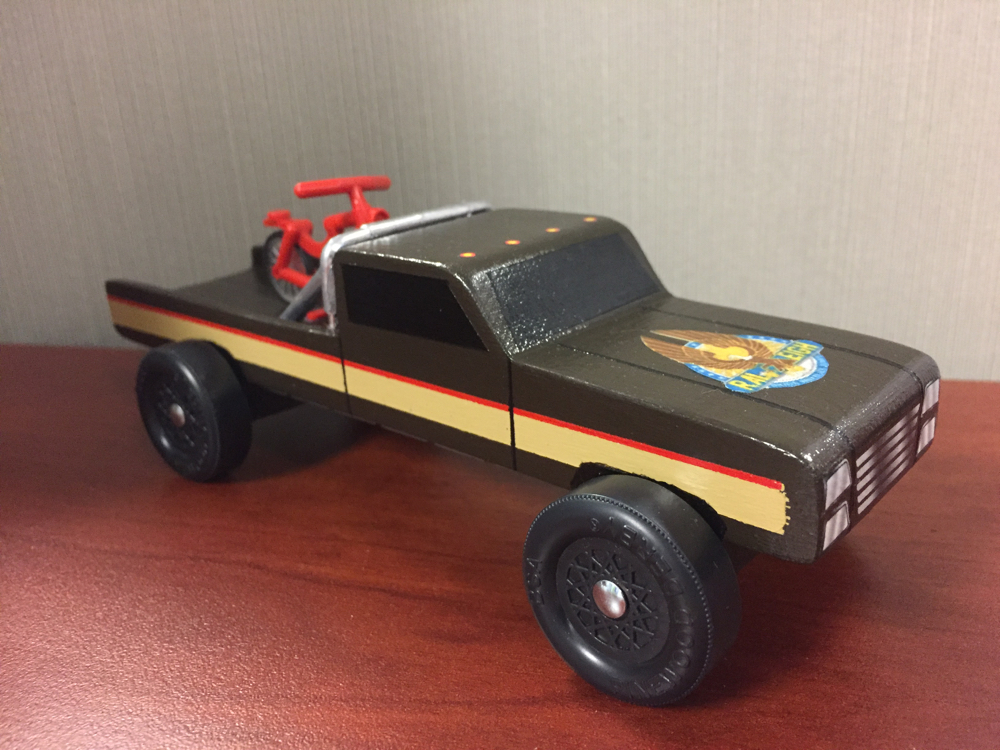 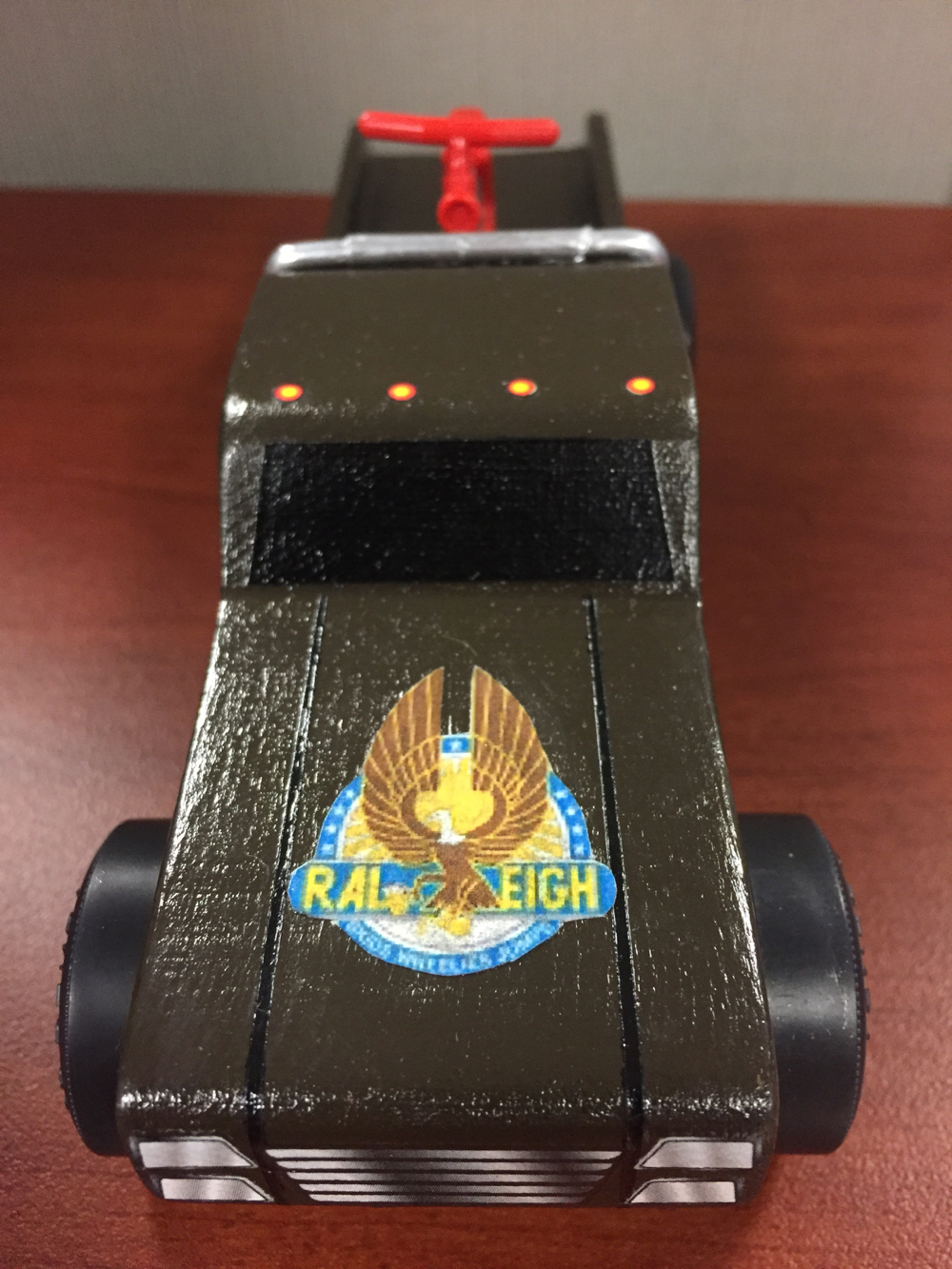 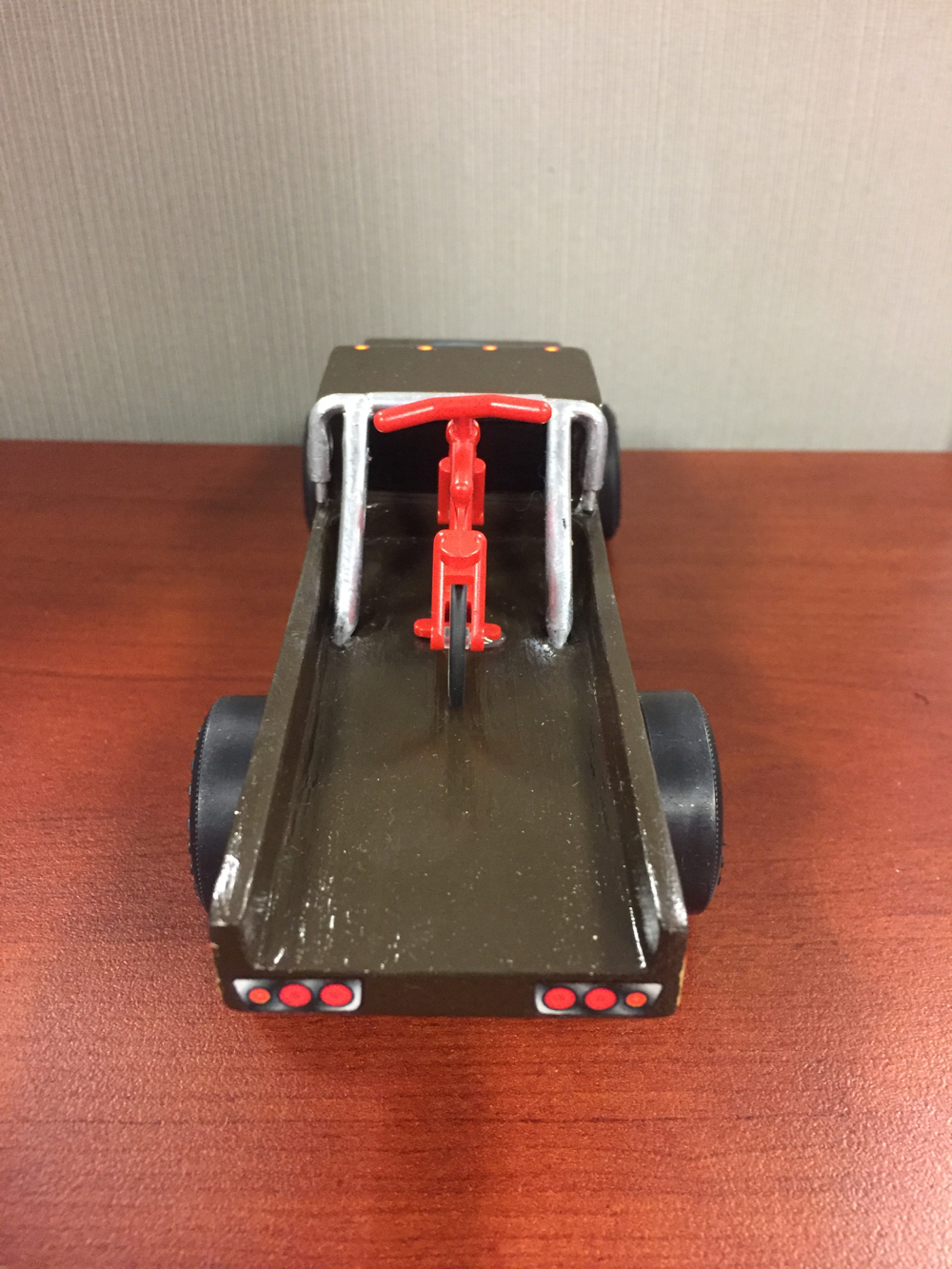 I mentioned to him that I’d made one when I was in the Cub Scouts, but because I neglected to put any weight into the base of the car, I got my ass handed to me during the first round.

An engineer I was not destined to be.

Anyway, if you get a second, swing by and spread a little joy Nate’s way, because his job is a thankless one.

Moving on from failed career dreams, bitchin new bikes, and being nice to Nate, I’ll move onto a notification that I’m once again flush with the new AHTBM top caps.

However, as I said in a recent post on the Instantgrahams, what you choose to put them on top of is entirely up to you; 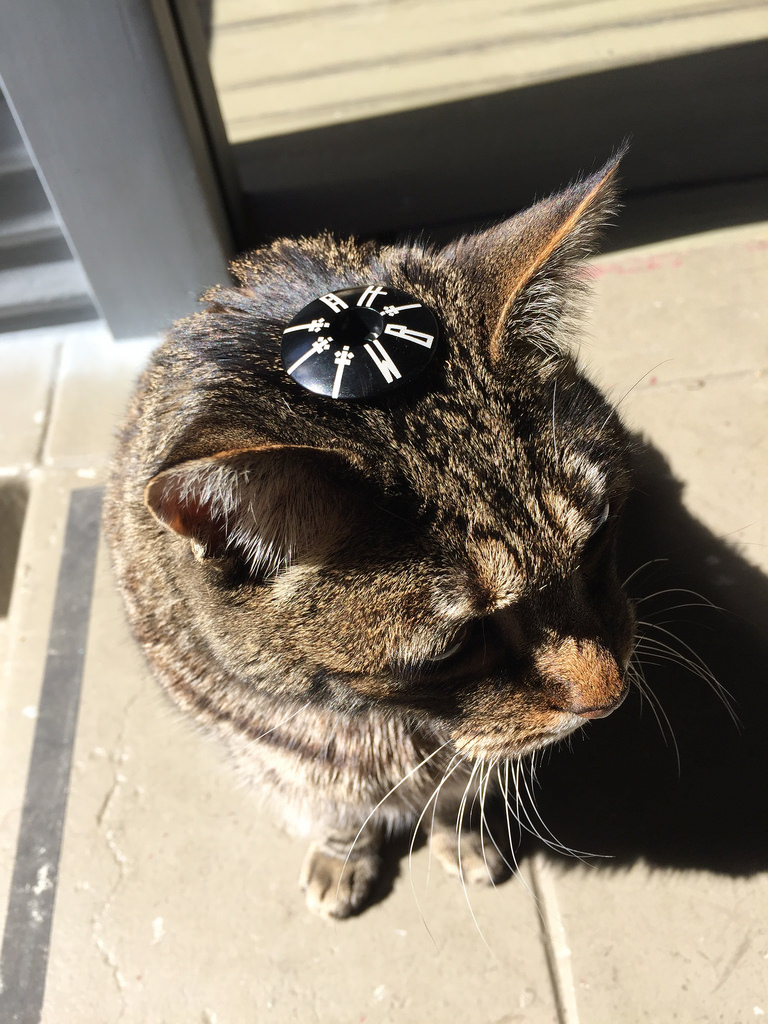 These little bad numbers were produced by Kustom Caps, are laser etched, (none of that screen printed garbage for us), and will forever serve as a reminder that no matter which direction you’re riding, you’ll always be headed south.

Lastly, I would like to wish a speedy recovery to our buddy Yafro who has been involved in the bike industry for so long and to such a degree that if you aren’t riding a bike or using a part that he’s had some form of involvement with the design of today, I guarantee that you have at some point in the past.

The short version is that after working the pit for his buddy while he raced motorcycles the other day, they were rear-ended. When Yafro and his buddy eventually emerged from the truck to inspect the damage, the offending vehicle gunned it, mowing our boy down and running over his right leg in the process, before hooking a hard right and vanishing into the afternoon sun; 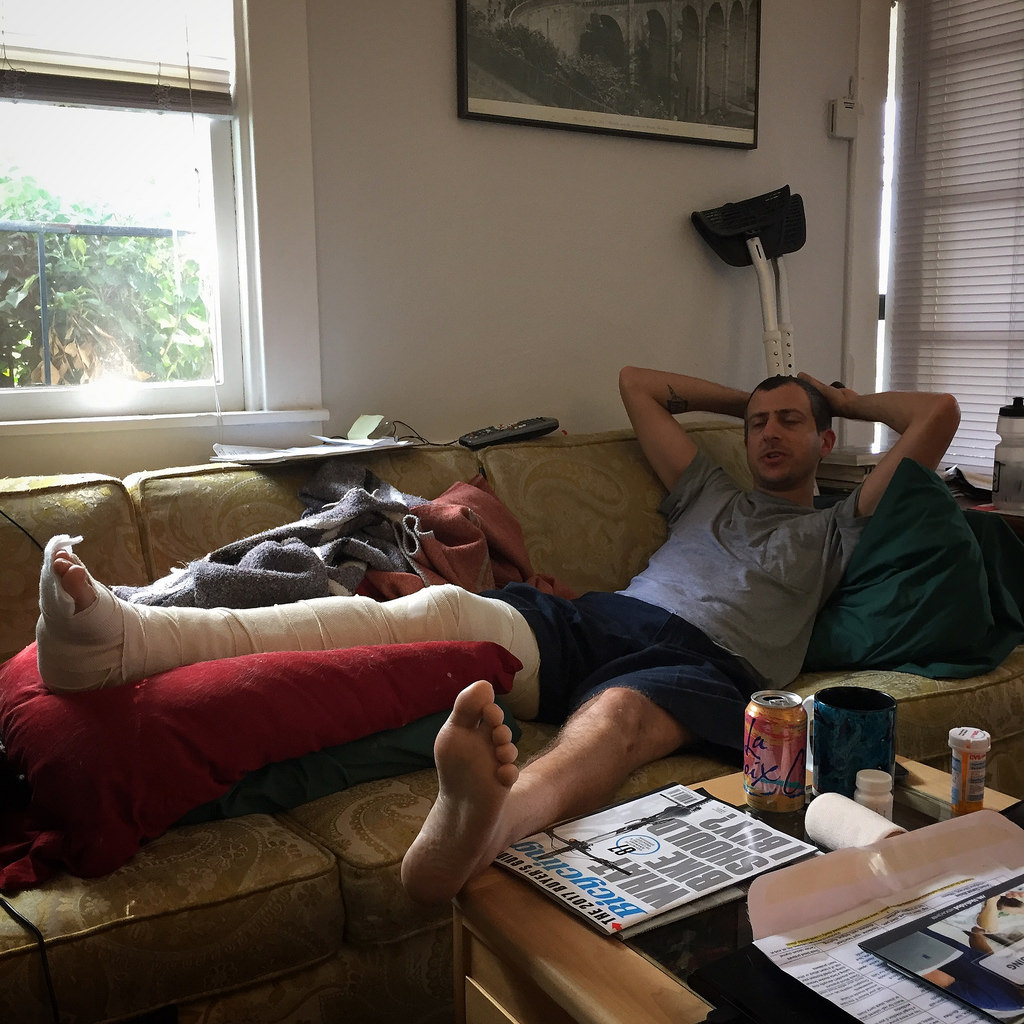 He’s going in for surgery this morning to pin his ankle back together, so if we can shoot some good energy his way, I know it would be appreciated.

While the lot of us are in it for the fame, accolades and glory, and though it’s but a temporary break in his career, Yafro’s (thankfully) living proof that sometimes the stuntman party do stop.