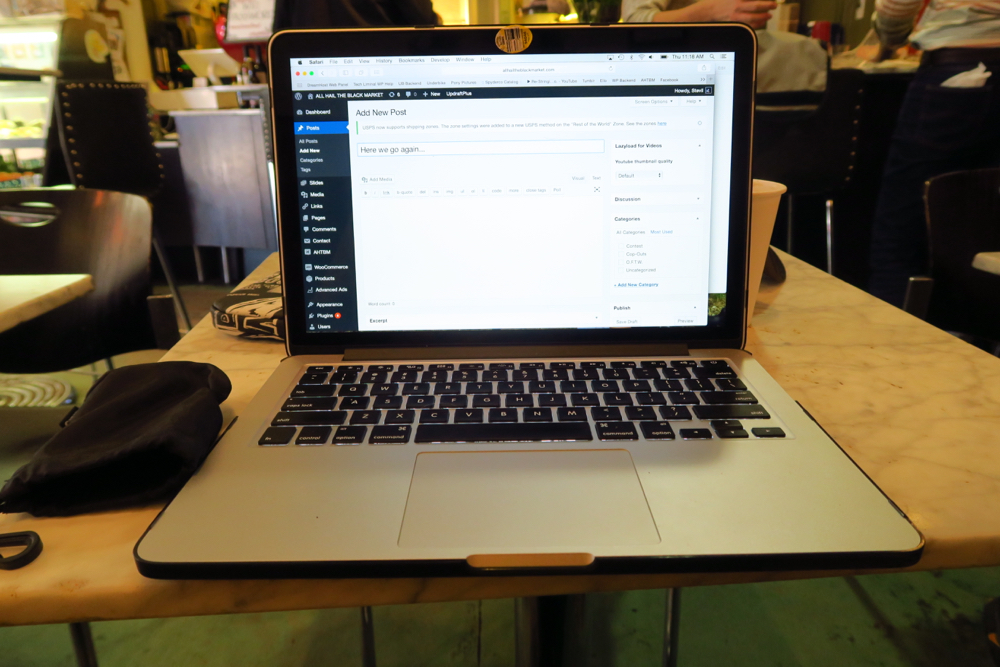 So here I am with a couple of days in Colorado under my belt, and at least as many airplane drawings; 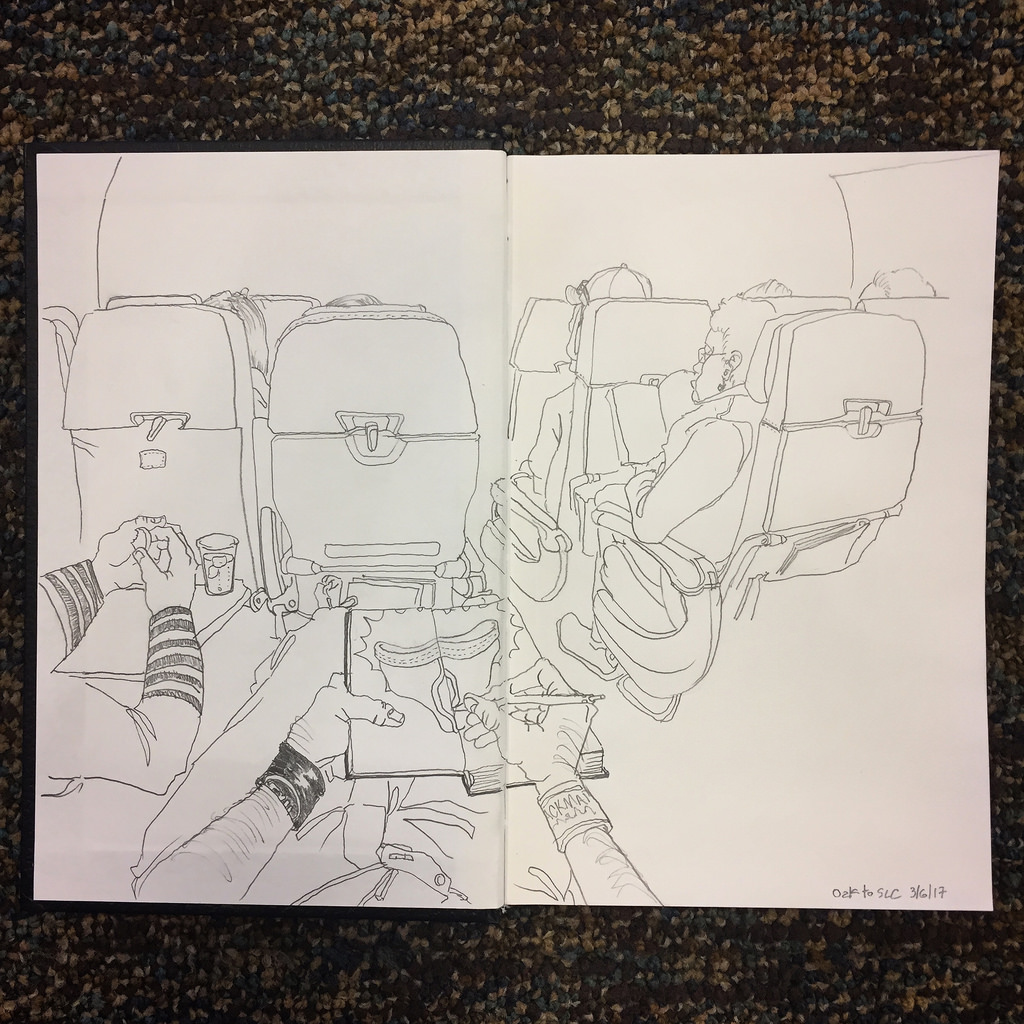 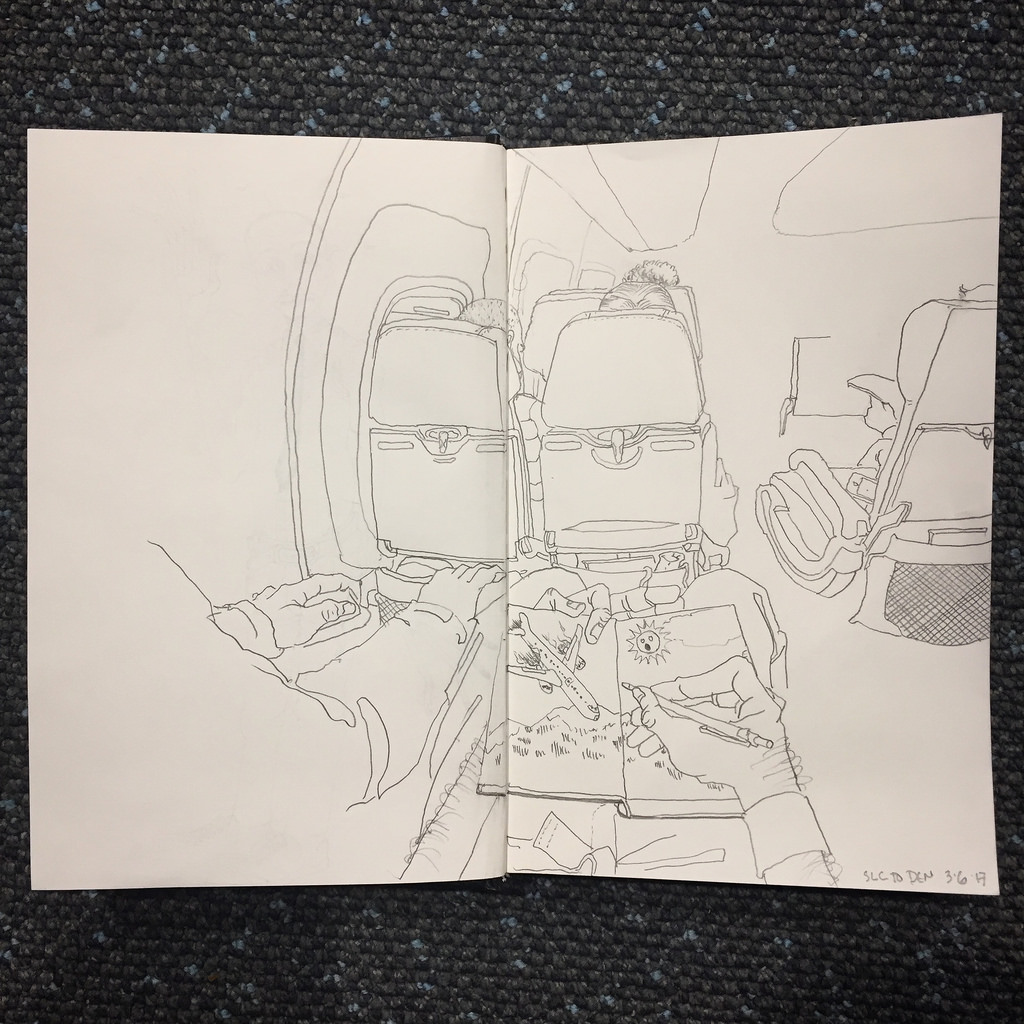 But it’s time to put my pencils away and bring out the naked lady box to get some actual work done.

Remember the last (and only) time I wrote a post in a cafe?

As fate would have it, not only am I in the same cafe, but I’m in the same seat, because I’m nothing if not a creature of habit.

Firstly, I guess I should apologize for half-assing it on Wednesday. Though I was kinda joshing about living in the bus, I am in a place where the internet doesn’t exactly lend to rapid fire photo uploading, and because it periodically cuts out, I figured I’d just chill a day and wait until I got back into civilization.

For those just tuning in, I’m not at the Handmade show, because as I said a couple weeks ago, screw traveling any more than a short bike ride/train trip/drive to go to that. I feel the same way about that particular show as I do Burning Man. If I could teletransport into the event for a couple of hours, and then bounce back to the sanity of my own isolated existence, I would do it, but actually getting on a plane, or investing hours in a car to get there is not a thing that appeals to me in the least.

Where I actually am is back in my home of Colorado’s Front Range, and in the loving arms of Joe and Laura from Soulrun. The point of the trip was mostly just to get a break from the muddy hell that is my life back home. Thankfully my hosts have all of the accommodations one could hope for; Beyond doing some Olympic level snuggling, and visiting the original Surlywrench himself, Jimbo at Vecchio’s Cyclery; -what I’m actually doing here so far are all of the most Colorado things ever.

Except for smoking weed, and taking cyclocross seriously, and listening to Big Head Todd and The Monsters.

I guess I take it back… I’m not doing all of the most Colorado things, but I did at least skedaddle and engage in one of the most Colorado with these two ladies, who despite their absolute lack of trying to do so, kicked the ever-loving crap out of me on a fat bike ride; For the ride, Joe graciously loaned me this beaut; Which I rode for a little while before getting a nose bleed; Though I have ridden 29 plus bikes a little bit in the past, (most recently in Portland), I’ve never ridden a fat bike before, and I haven’t ridden in the snow since I was 13, so this was all a brand new experience for me. Once I got used to riding while wearing more clothes than I’ve had on at one time in over two decades, the twitchy nature of the snow, and aside from this instance; -that I probably wasn’t going to see much of my riding partners aside from their backsides, I actually began having a pretty good time; I should note that this is the only photo of me either riding a fat bike, or smiling in existence.

Doing both things at the same time was a first.

Based on a rudimentary internet search, I came to find out that the fat biking trend is dead, so I guess it was appropriate that I should start doing it now.

Staying true to Colorado things would have meant at the conclusion of our ride we would have drank canned microbrew beer that tasted like carbonated farts, and talked about how awesome fat biking is, but we did neither. For my part, I’ll leave those things to the truly dedicated.

Because it’s actually taken a ridiculous amount of time to even write this much of today’s post, I believe the cafe staff are beginning to think I’m just pretending to work, am taking advantage of whatever free refills I can, and as such, are giving me the evil eye.

However, based on the number of other people sitting around me doing the exact same thing, I suspect this might need to be added to my list of the most Colorado things ever.

9 Responses to “Here we go again…”