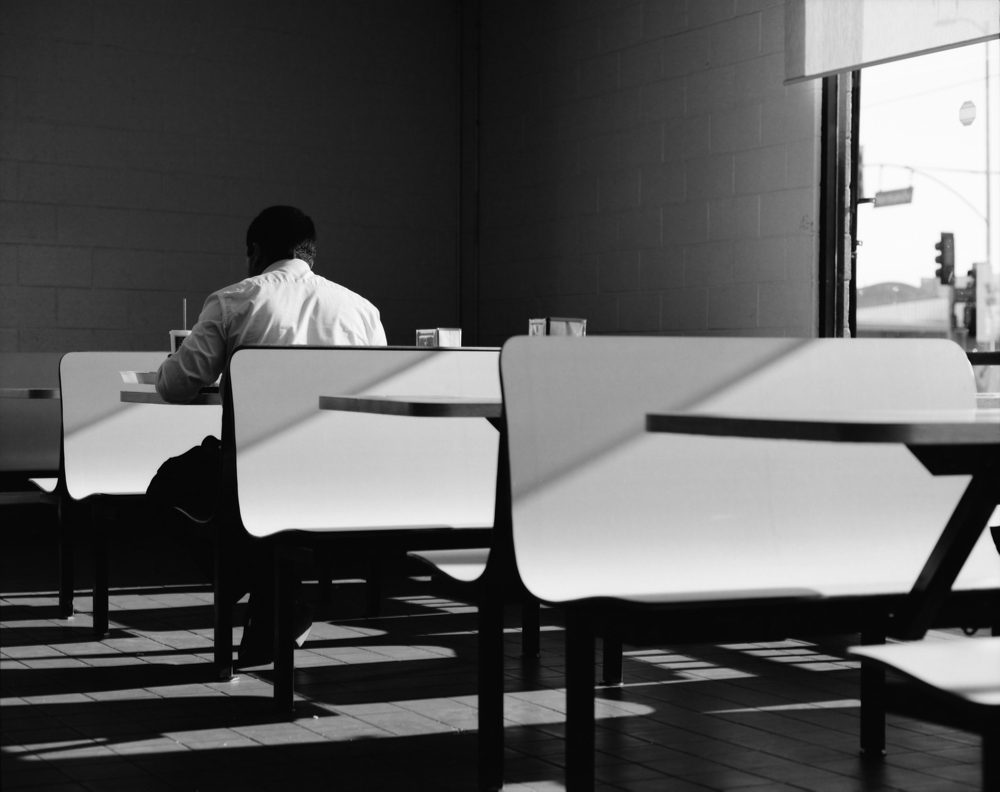 Once I caught my second wind, I decided to try it again, only this time with the idea of human beings as social animals, and how as I grow older, find myself increasingly happy to have zero contact with any other people forever and ever amen.

That train of thought immediately got derailed by the part of me who likes being around people, and who enjoys going out and stretching the old social muscles every now and again.

Especially when it comes to an event where I know I’m going to be immersed with like minded folks, and maybe even get to slap hands with some I haven’t seen in a while.

Luckily, just such an event went down on Friday with the Mission Workshop/Paul Component Engineering jibjab. Before the chaos I met up with Paul at a nearby watering hole and we caught up on life and times. He was feeling a bit nervous, and I forced a shot of brown on him, and told him to simply tell the story.

We made our way to the place, and the crowd had already begun to swell.

I stood out front and caught up with these guys; 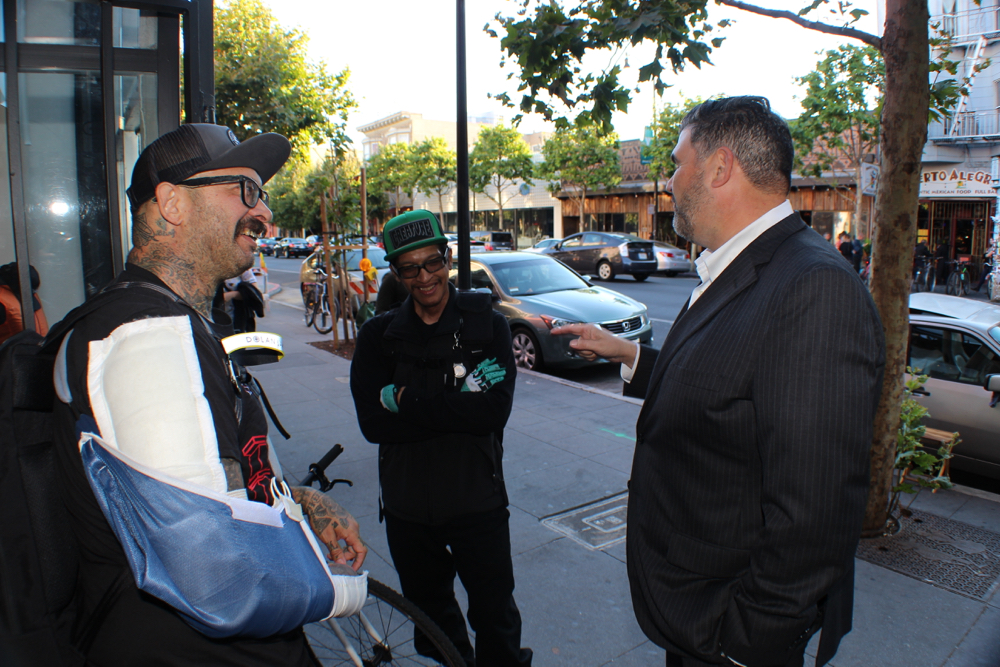 That of course is Dannyboy Smith on the left, whose broken arm benefit I’ll touch on momentarily, Loudass on the right, who came over straight from court, (hence the suit), and in the middle is a local legend we simply call ‘Lips’.

I hadn’t seen the fella in an age, and it would seem as though since last crossing paths, he kicked cancer right in the teeth; Proving once again that we should never neglect to let your friends know you love them.

Other folks lurking in the near vicinity were documented as well; Finally the announcement was made that the talk was to begin, and begin it did; 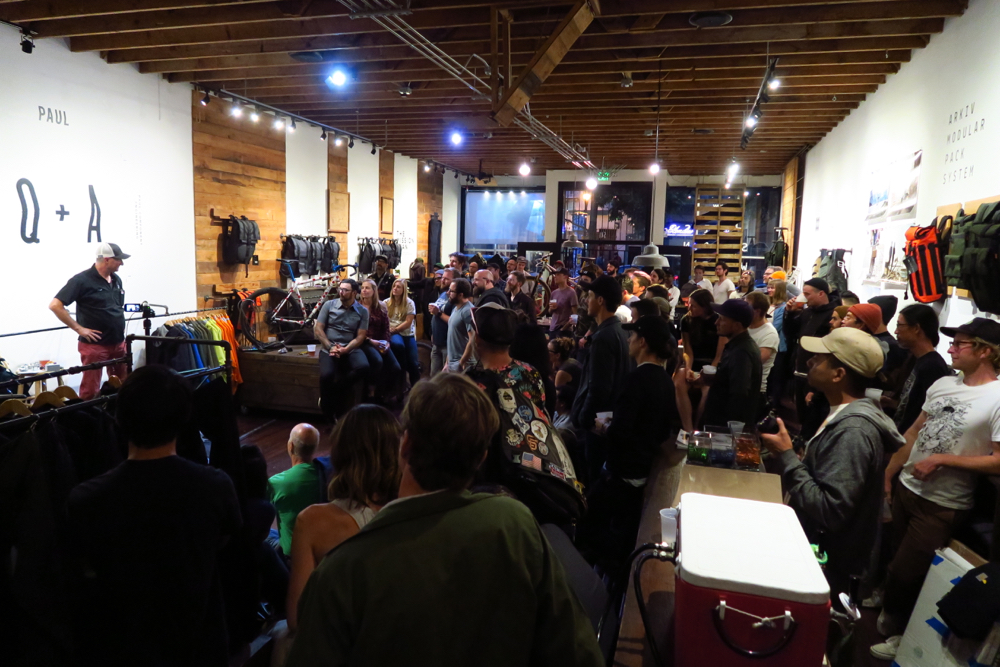 It was an engaging evening, and it always does my heart good to see a person who’s committed to independent American manufacturing get props for continually churning out top notch products.

Besides talking about all of the Paul (the company) goods we know and love, he (the person) hinted that a new doodad is coming down the pipe. What it is, and how many of your front teeth you’d give for it remains to be seen. If history serves as any indication, whatever it is, it will be badass, and the number of teeth will most likely be all of them.

Speaking of teeth, and to circle around to the previously mentioned Dannyboy- As I’ve noted here on the site recently, in the midst of a mountain bike ride a couple months ago he did battle with the ground, and came out in considerably worse shape than his opponent.

Because he’s employed as a tattoo artist, it turns out that having a severely broken arm is less than ideal conditions in which to exist. Thankfully he has a good support network to help him out, and help him out we did; Meagan’s feelings regarding my repeated inquiry whether or not pink would look good on me is reflected in her expression; If you find that you would like one of them shirts, reach out to the old bean at tattooinstaller(at)gmail(dot)com and give him a hello.

Like I said at the head of today’s post, as time goes by I find that I’m less inclined to be out and about making the scene, but in the above mentioned scenarios, I’m glad that I did.

To paraphrase my old pal Blintz, “friends are like bikes. You can’t have too many nice ones.”

Now, in closing, I’ll share an email from Amigo number three, who because I will be absent, has agreed to be my boots on the ground at next month’s Interbike trade show.

With Interbike just around the corner I figured I should get my journalistic juices flowing so I’m sending you this short review of my new Blue Collar Nigel. 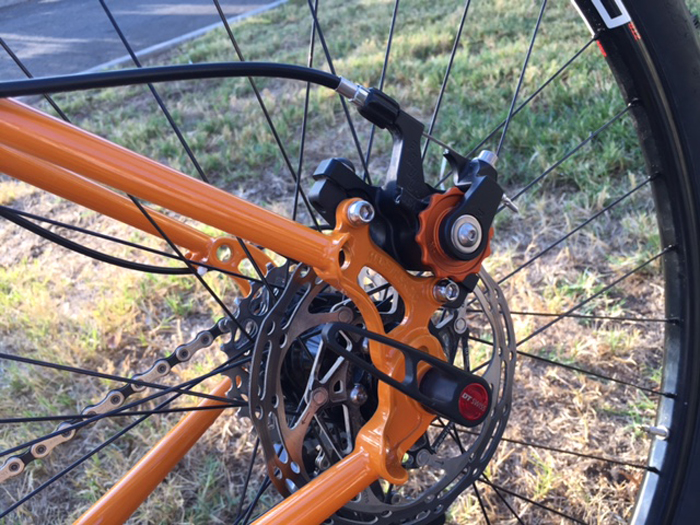 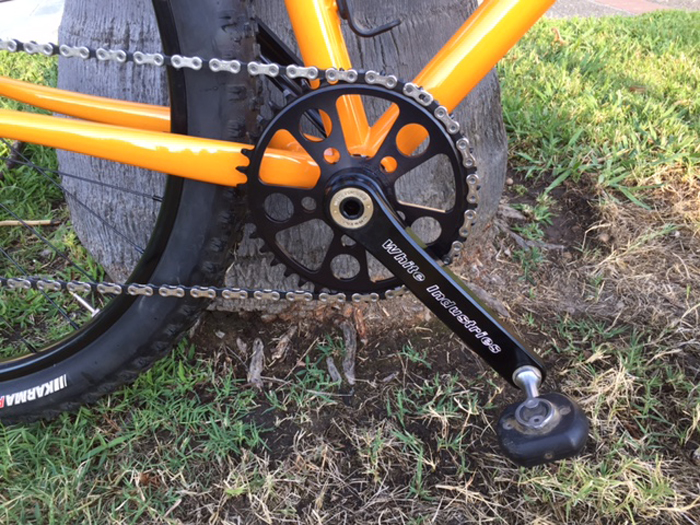 Let that serve as an example of what kind of posts we’ll be getting from him post-show.

Short, sweet, and as long as it’s regarding something he likes, to the point.

Now, it’s with that declaration that I make like the anti-hero I strive to be, and once again retreat to recharge back into the depths of my corner of solitude.

One Response to “Because I’m a social butterfly.”