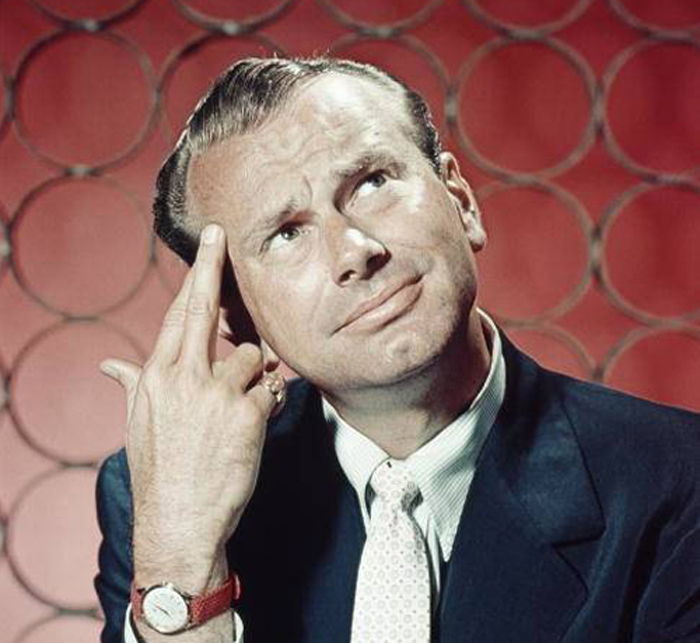 Where were we? Who are we? Why are we? All reasonably valid queries.

Ah yes. It was Monday and I ghosted. I Irish Goodbye’ed. I French exited.

In truth I didn’t even really show up, and I have no reasonable excuse aside from I just didn’t want to come to work that day.

Those among us who haven’t done the same thing at some point or another can have my bag of stones, and begin casting them. While you’re doing that, I will take the third to the last opportunity to mention that in seven days, I will be closing the order window on the Respect Women shirts and hoodies;

Once the order is submitted, the turn around with my screen printer should be pretty quick, but because I’m small potatoes, it can vary. I’ve mentioned this before, but they have the contract with Thrasher Magazine, which means on any given day, they have about eleventy billion Pushed Sweeper shirts to crank out.

Fortunately, they are very good to me, and squeeze in my requests where they can.

If it takes a little longer, it just means that they’re upside down making clothes for the likes of noteworthy skateboarders like whoever the hell these people are; 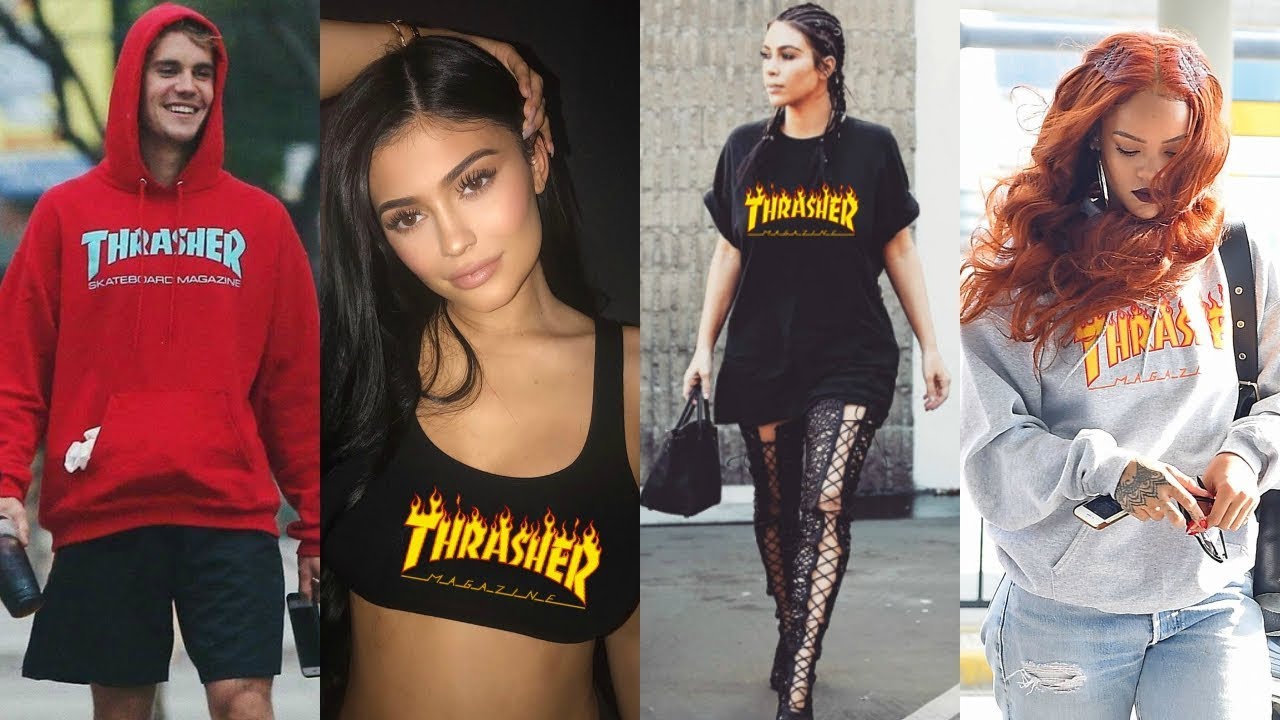 Anyway, if you’d like to get into the queue, you can do so here, or just wait for one of the next two reminders.

And while we’re on the topic of reminders, I have two for folks in the PNW, the first coming from Hazel of Portland Design Works;

Hey just wanted to send this along in case you feel like plugging it; 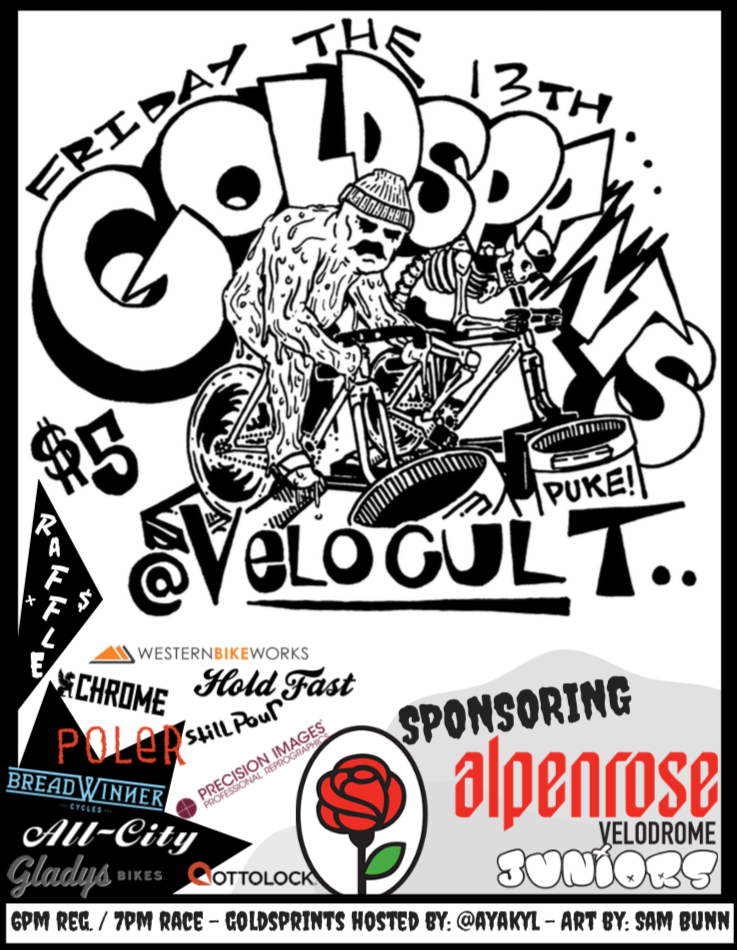 All money raised will go towards sending juniors to Track Nationals this year.

I do feel like plugging it, because in whatever capacity I can, all manner of plugging things is what I do.

And might I respectfully request that you get your mind out of the gutter.

Secondly, it was through the grapevine that I caught wind of some Seattle/Hodala shenanigans and their Polka Dot Crosser; Oh, wait… That was yesterday.

Well, once again, I’m literally a day late, and a dollar short.

But Hodala gets from me what they pay for, which usually comes in the form of blinding hangovers and regret.

Hopefully (assuming you happen to be in that particular region), you were there, and you walked away with the same.

While we’re on the topic of racing, the other day I got a text from Morgan (who I most recently mentioned in this post as being the one responsible for the following photo of JPHNH); 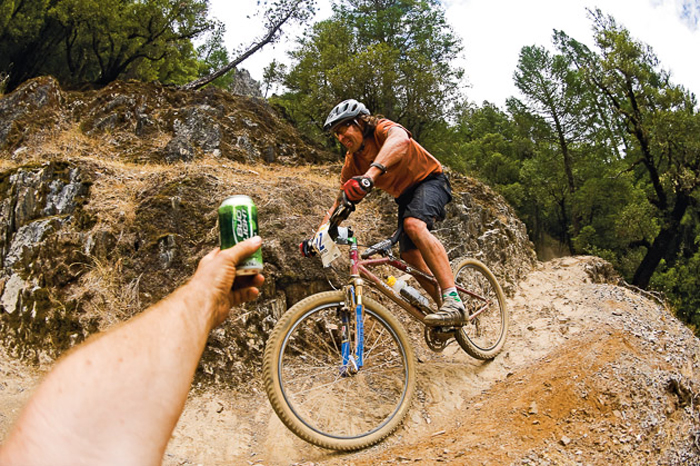 He was embroiled in some sort of project for which he was asking me about noteworthy number plates I might happen to still have either pinned on my wall, or perhaps tucked away in my archives; As it turned out, I had a few located in both places which I stuffed into an envelope and overnighted off to Colorado for Dog know what reasons.

Taking the walk down memory lane inspired me to pull a few of my favorites out to display here as well.

The 1996 mountain bike season was a banner one, opening with the Sea Otter Classic (back when instead of having e-bike races, they had rollerblade races. I shit you negative).

After foraging around the duel slalom course for abandoned numbers, the lot of us returned to our campsite, and with a sharpie, scissors, electrical tape, and gasket sealer went about plotting to what our addled minds was going to be one of the greatest scams of all time; 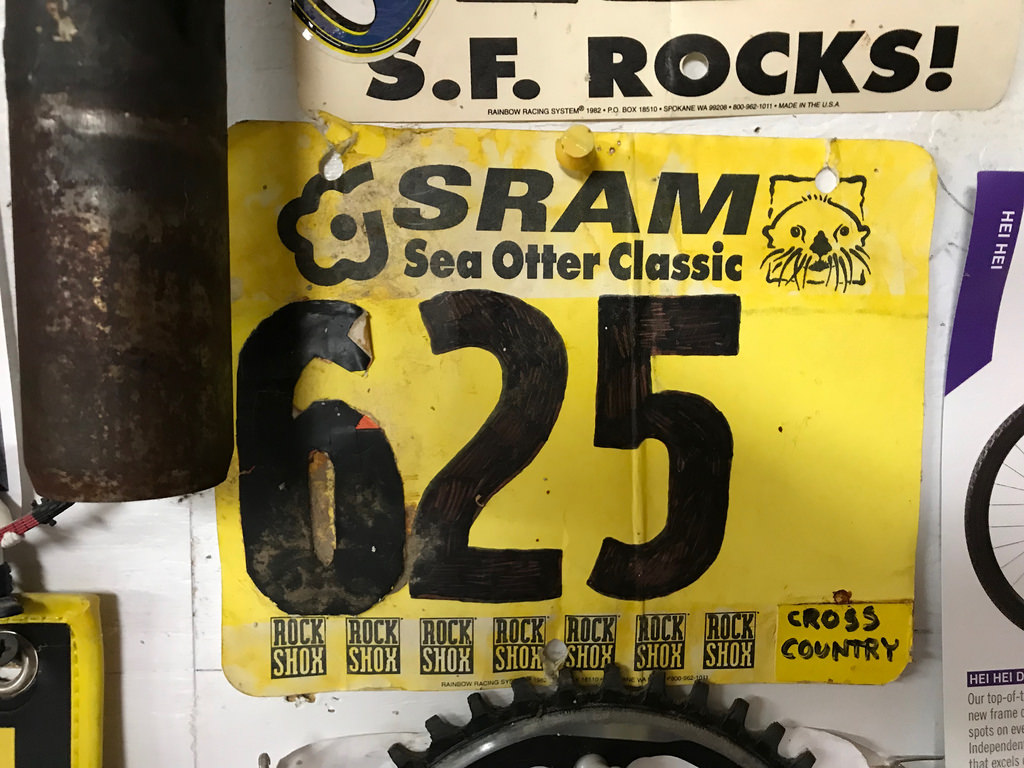 We made our own plates, because not only would we be damned to pay the $60.00 (or whatever it was) entry fee, but we didn’t have the money anyway. In order to make it look more authentic, I splattered mud on mine despite the fact that it hadn’t rained in months.

Nextly, we’ll look at number plate for the California Street Hill Climb that was held in tandem with the ’96 Napa valley World Cup mountain bike race; The only thing I recall for certain was that I beat Don Myrah, pretended to barf on a reporter while being interviews for that evening’s news, and later met a girl at a bar from Georgia named Lane.

Rock star living, to be sure.

Later that year, I rode the most agonizingly poorly routed CMWC race in the history of the event; 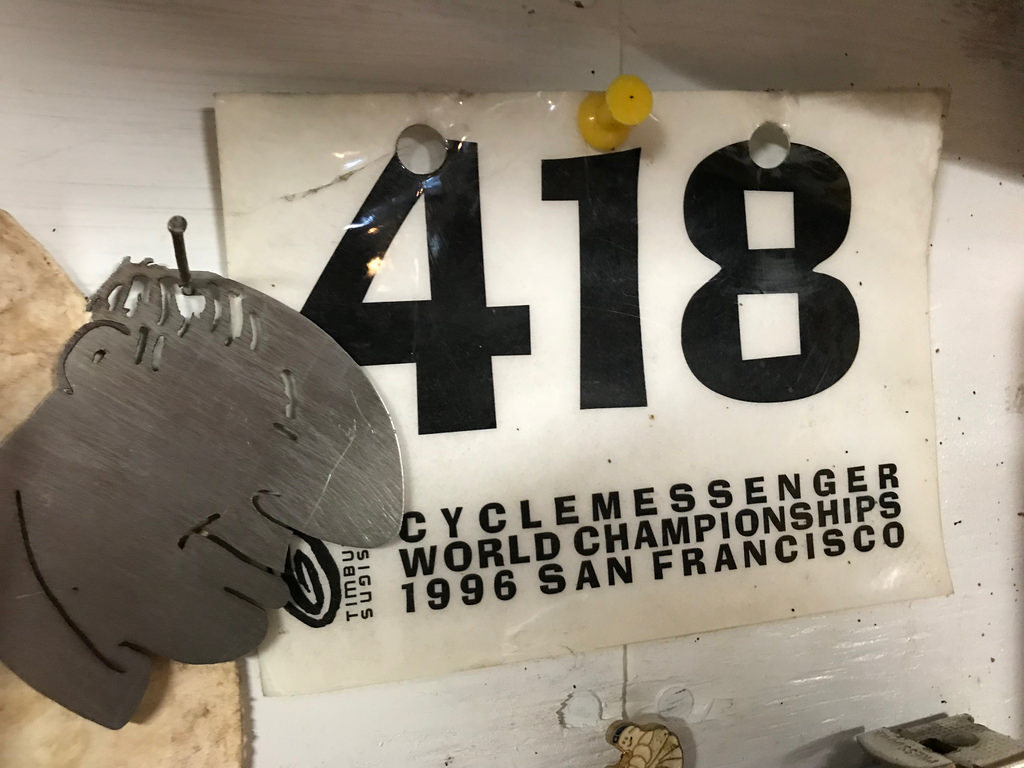 If I do say so, I was an absolute beast on the bike, ascending Vallejo/Montgomery climb no fewer than four times; 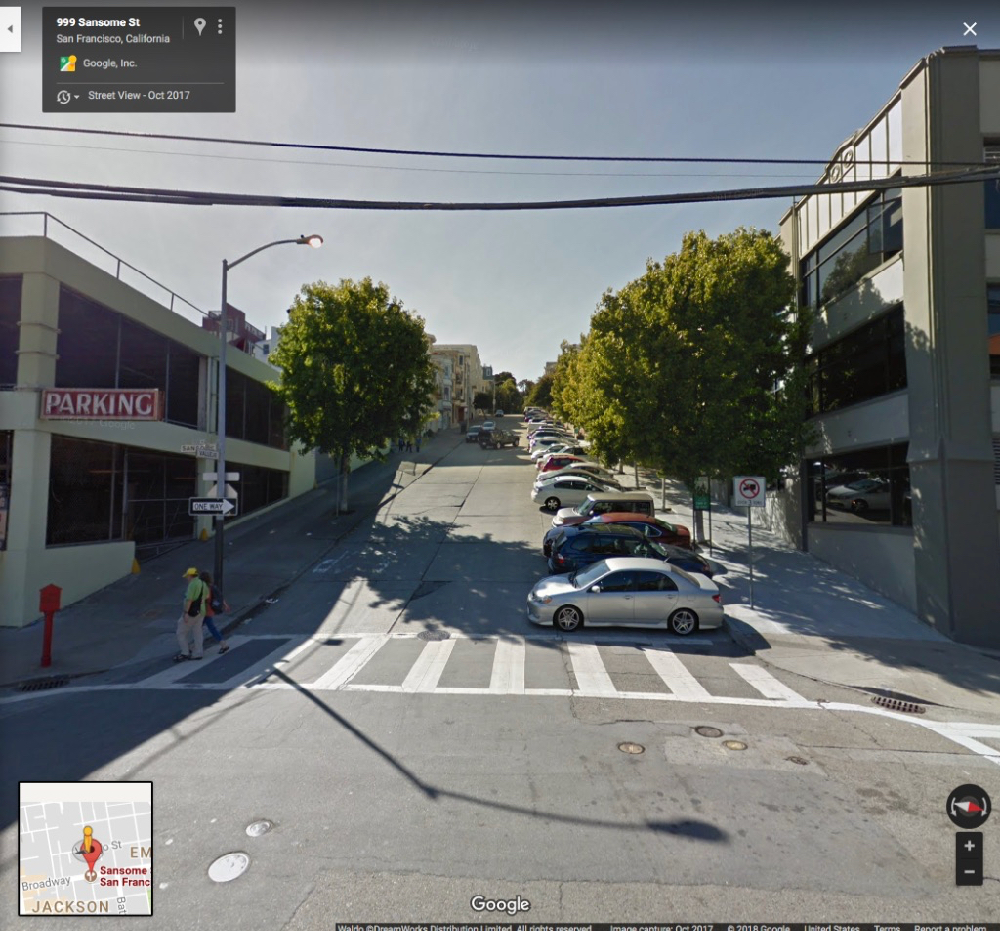 Had I been a smarter messenger, I would have just climbed it once, and then stayed down in the flats backing and forthing, racking up the points that would eventually deliver me to the finals.

Alas, I was not, did not, and did not. As it was, my race was the equivalent of endurance powerlifting.

Finally, my favorite, and potentially least impressive number came from the first annual (though second ever) Single Speed World Championship; Fortunately, thanks to Vernon and Ferrentino, I have actual provenance proving the number was in fact mine; 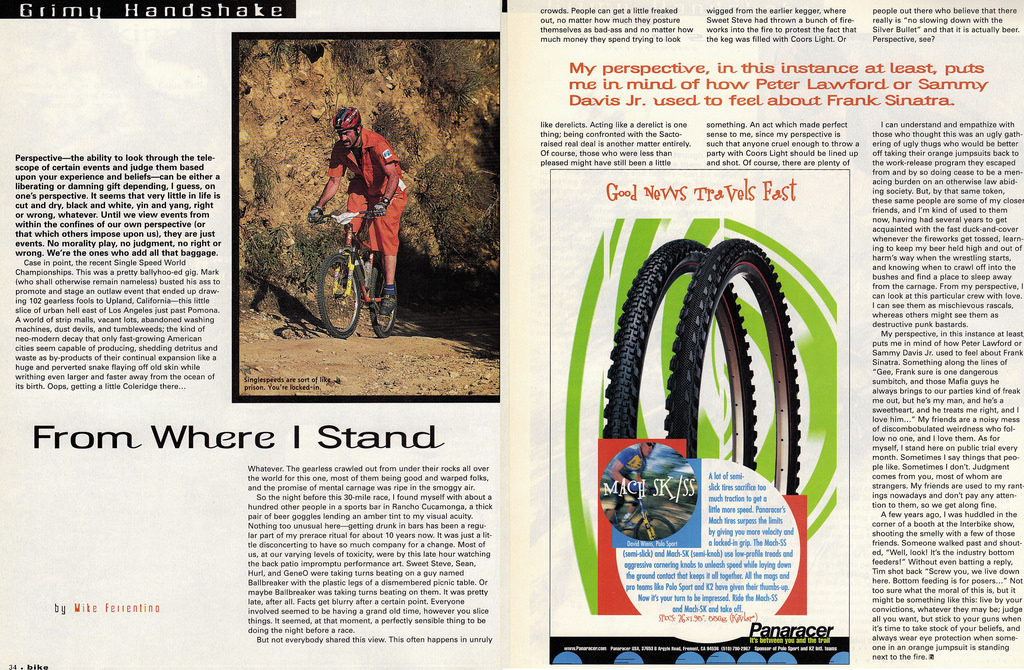 At that point, I was kind a big fish in a small pond. I wasn’t the fastest local guy, but I did ok. At some point around the top of the seemingly endless initial climb, Travis Brown passed me with such ferocity, my hairs blew around a little bit. It was then I decided maybe I wasn’t such a hot shot after all.

My race career could probably be summed up thusly- At no point in the history of humankind, has so much effort resulted in so little.

Whatever- It was fun while it lasted, maybe.

And thus concludes the drunken limp down memory lane. Perhaps the additional numbers from my collection will find a new life after landing in Colorado, and being documented for whatever reason they will be.

2 Responses to “Now where were we?”