Things were simple back then. We hated hangovers less, weren’t constantly misplacing our telephones, and maybe danced by ourselves while bathed in various sunsets. I don’t remember that part specifically, but for the sake of fluidity in today’s effort, we’ll keep it.

Likewise, do you remember back, like, a decade ago when blogs were still a thing? (I just found out that they were dead, by the way);

Was anybody going to tell me? I’m always the last to know.

Anyway, life was simple back then. I’d wake up, drink coffee, bang out my three missives a week, and my only ‘competition’ were like, three other websites, who in the time since have either eclipsed me, or gone away entirely. Meanwhile, I’m still plodding along, beating a drum that few will ever hear. Still, I continue to believe in what we do here, and will maintain the directive primarily because A) it’s the only thing I’m marginally good at, and B), my OCD won’t let me not.

Another component of it is that it reaches into corners of the world that I personally cannot, and allows me to push information I believe in. Case in point, the promotion of support for a fella who just got some bad news about his prostate; 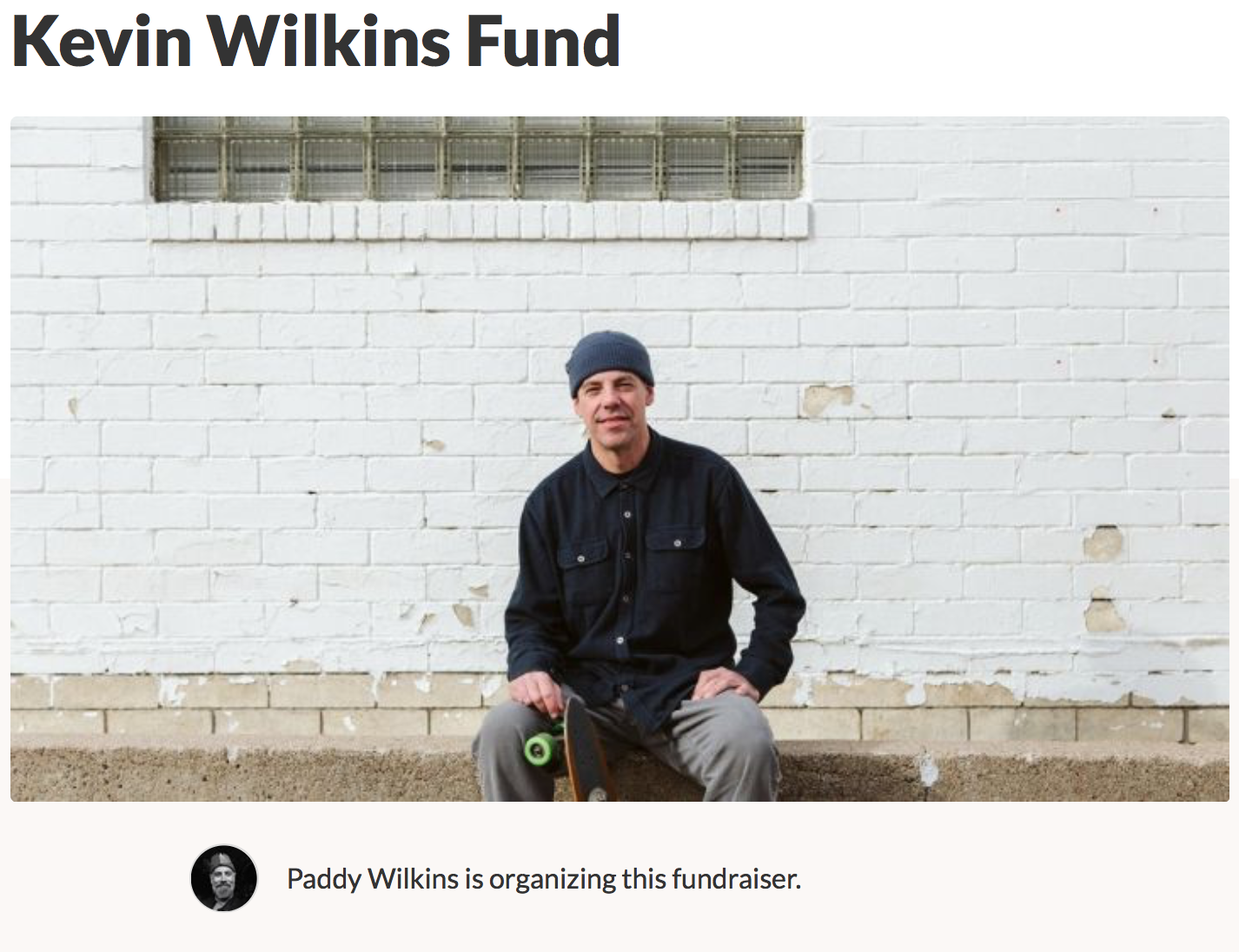 This is Kevin. He is a long time fixture of Lincoln, Nebraska, a died-in-the-wool lover of all things bike, and one of a very few number of people who have had a finger in nearly all things skateboarding for well over thirty years. It’s safe to say, his influence has crossed your field of vision with regularity, but you would never know it was his. On top of all of that, he is an absolute peach of a human being. I’m gutted to hear of his diagnosis, but in recent texts exchanges, encouraged but his positive attitude, as well as the fact that people are all stepping up to the plate, and circling the wagons. (There’s your day’s two cliches for the price of one.)

Funny thing, is long before I was personally acquainted with either Kevin, or photographer Bernie McGinn, I knew of this photo of Kevin, shot by Bernie in a 1988 issue of Homeboy Magazine; And speaking of Bernie, he’s currently selling photos to help raise funds for our boy. If one of his prints strikes your fancy, reach out and get one for yourself;


And as I was saying previous to that, if you have a five or ten spot you could part with in support of the old bean, I know he, his family, his dog, and our community would appreciate it.

In conclusion, Kevin is awesome, and cancer can eat shit.

A thing that I will defend from partaking in that particular meal of course, is bikes. I was lucky to recently stumble across the following clip from Giro Sport Design last week of Andrew Jackson riding the holy hell out of his;

Besides just being a beautiful piece of film work, I was extra stoked to see BlackHeart Bikes get a little bump out of the deal as well.

I met BlackHeart’s principal/founder when I was in LA a year ago, and I’m stoked to see his imprint picking up speed; 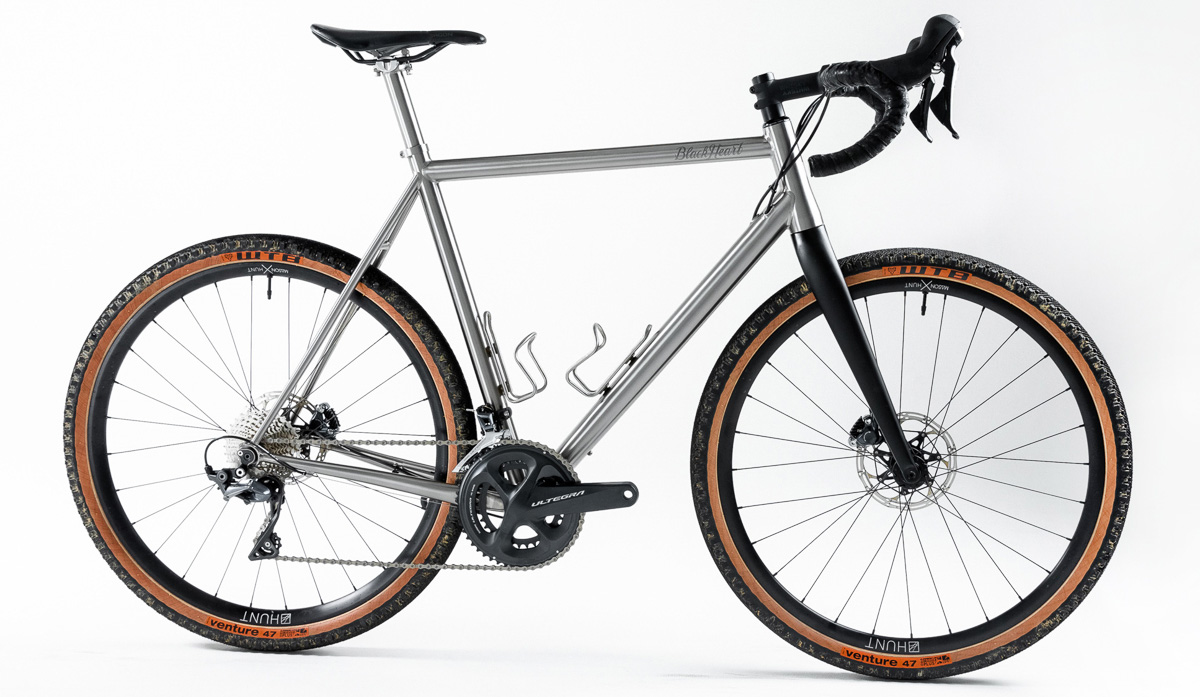 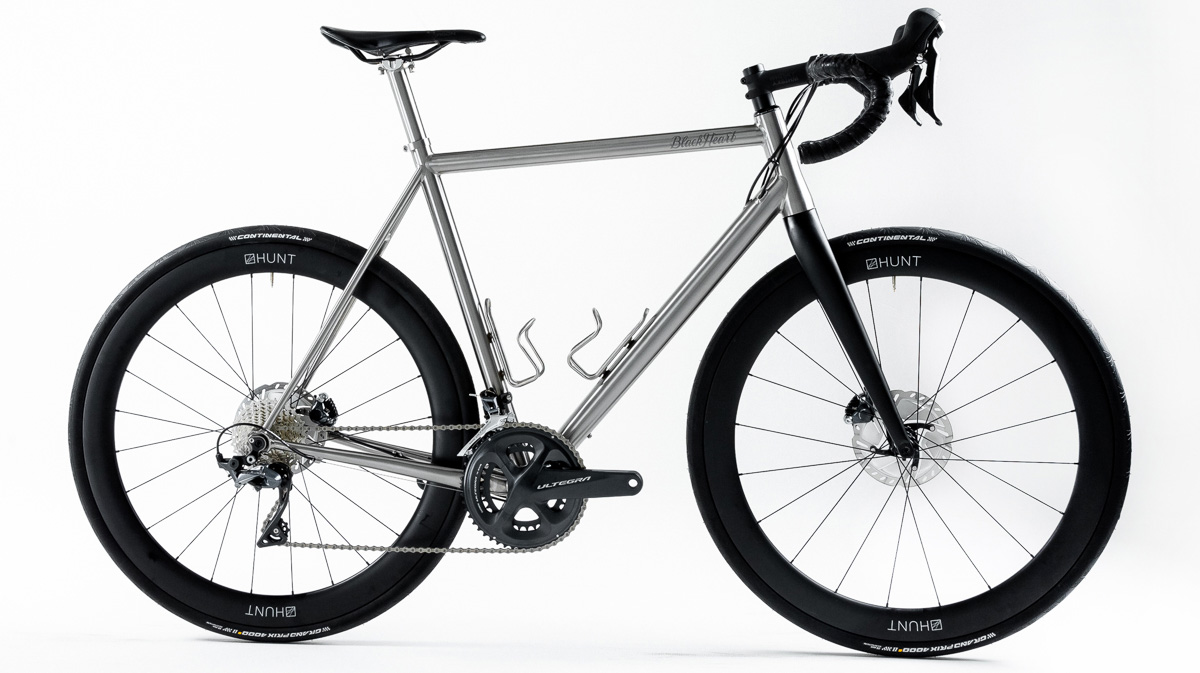 Anyway, bikes are cool, Andrew Jackson’s cool, and above all, whenever it’s possible riding to your ride is cool.

One might assume that advice such as this might be the best I could hope to offer, but as I mentioned at some point over the last few weeks, the good people from (The) Cycling Independent have offered me my very own spot on the site where I can wax on about other people’s problems, while completely ignoring my own; 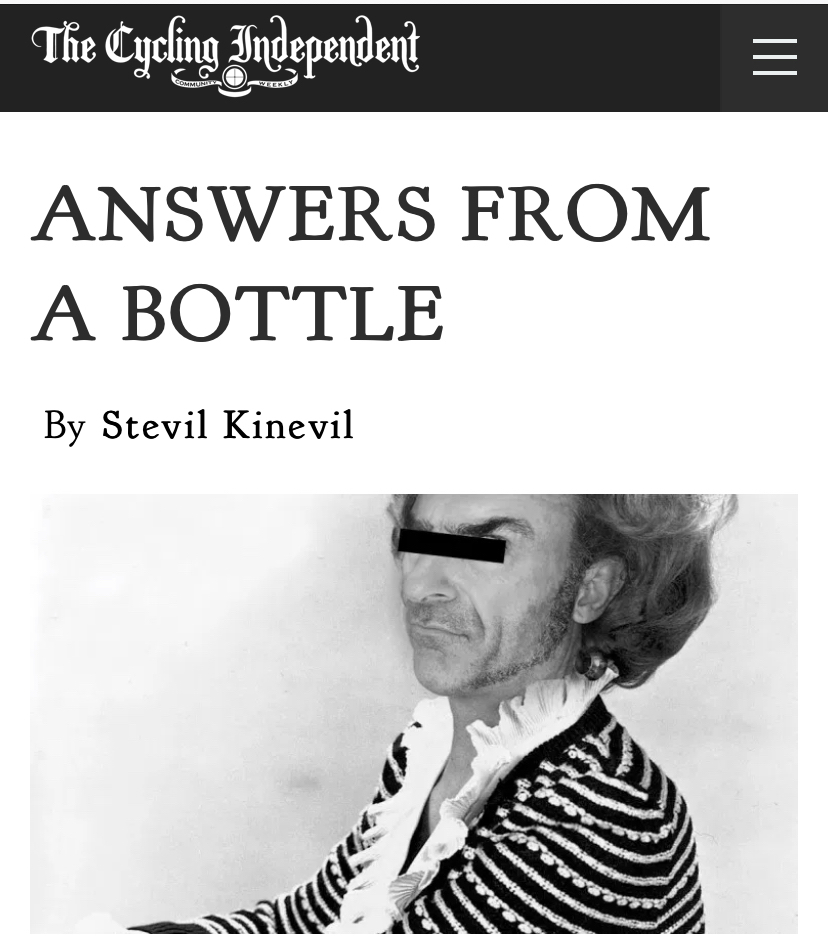 Do you have a question you think I might have some insight on?

Shoot it to stevil(at)cyclingindependent(dot)com, and let me see if I can spray some stink on it.

Now, before the bellyachers come through and rain on the parade, I know it’s not an original concept, nor do I think I have some kind of special perspective that stands as the final answer on the banal. Way back in the early ’90s, there was a feature in a free monthly called ‘The California Bicyclist’ called ‘Dear Uncle Surly Wrench’. I can’t confirm or deny that it was written by Ferrentino, but I think that is factual. Anyway, people would write in with tech questions, and Uncle Surly Wrench would take them apart brick by brick, leaving the writer a smoldering pile of hurt feelings. Then, many years later, there was Bike Magazine’s ‘Dear Chopper’, which to my memory was a kinder, gentler Uncle Surly Wrench, and now there’s me who is but a mere shadow of either.

If you don’t like my answers, or have no interest in the column’s existence at all, I invite you to check out literally any other part of the internet. Conversely, if you do enjoy it, then welcome to the party.

Lastly, I’m going to continue to blow my own horn and circle back on this post, and show off a couple of new photos I took with my old/new camera that I’m becoming only slightly less intimidated by with each outing we take together; 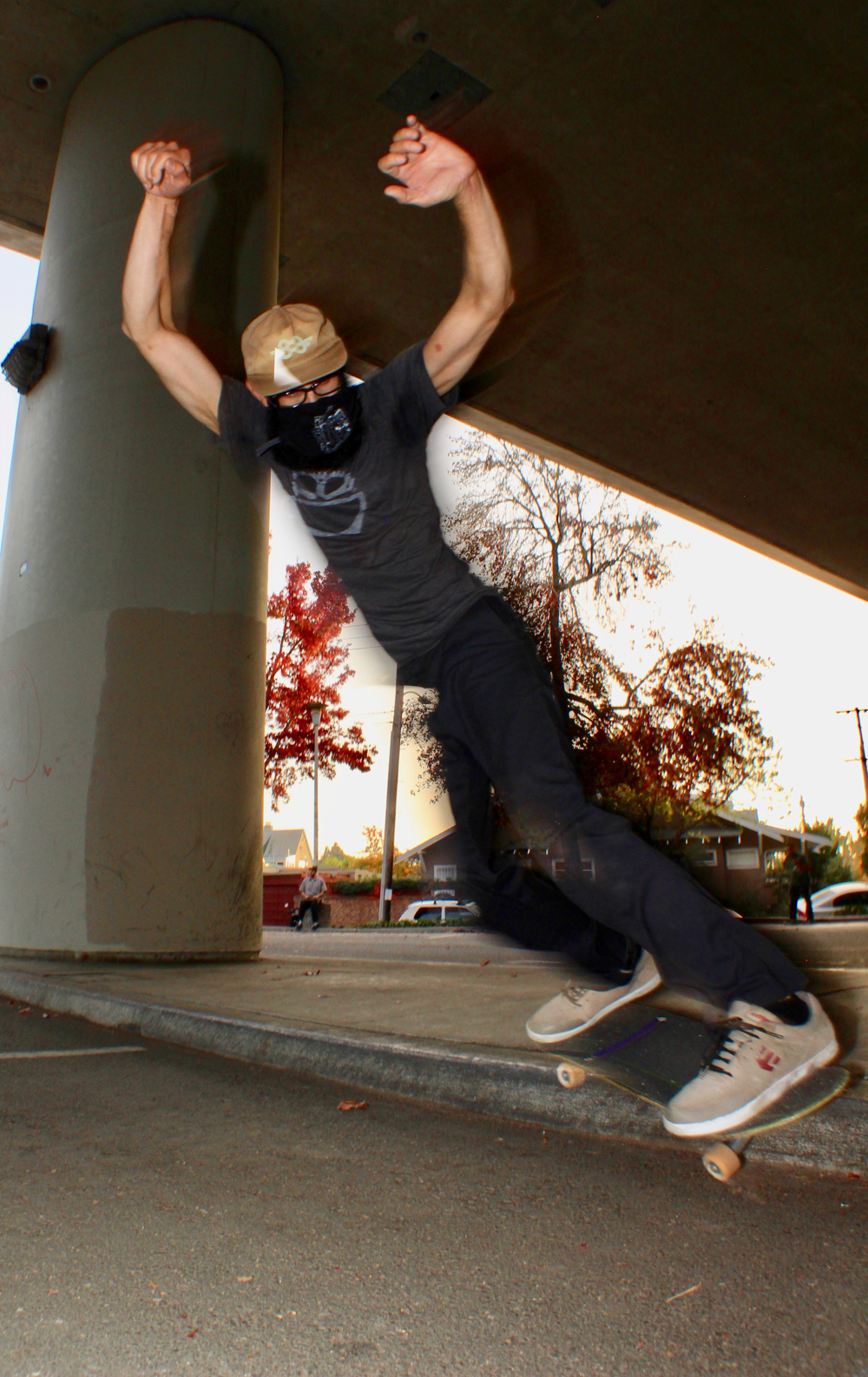 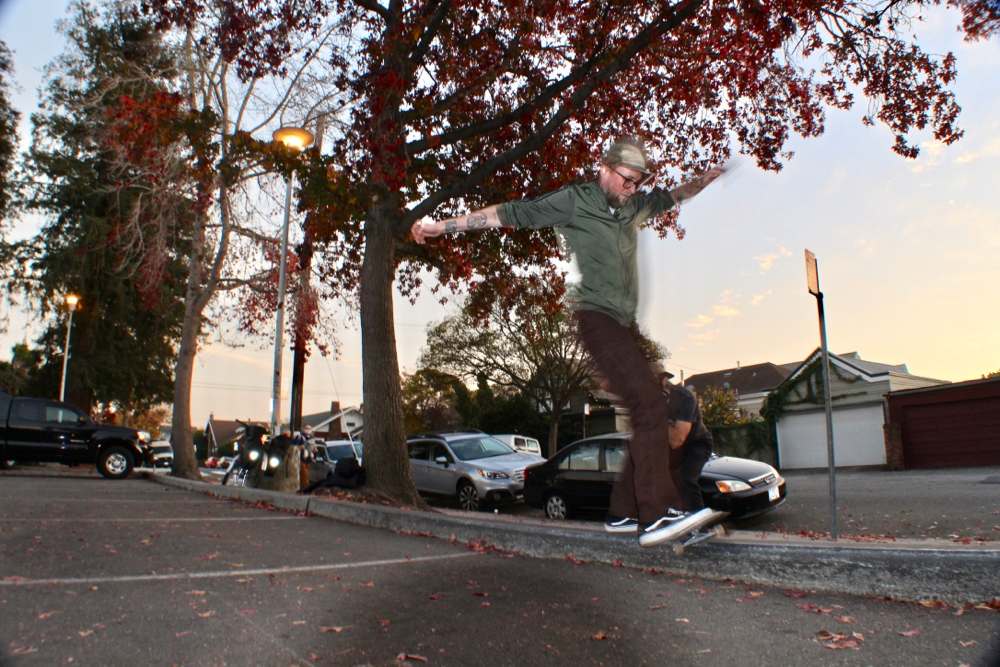 That top one is the aforementioned Judd of the Rockridge Curbs IG fame. What with him highlighting all of the resident derel shenanigans, I thought it was the least I could do to try and pop one off of him.

One of these days, I maybe can even take a decent photo in something other than low light dusk time, but personally, that’s kinda my jam anyway.

Besides being good for taking action photos in, as you might could assume, it’s real good for dancing around by yourself in as well.