–verb (used with object)
1. To make slow; delay the development or progress of (an action, process, etc.); hinder or impede.
–verb (used without object)
2. To be delayed.
–noun
3. A slowing down, diminution, or hindrance, as in a machine.
4. Slang: Disparaging.
a. Mentally retarded person.
b. A person who is stupid, obtuse, or ineffective in some way: a hopeless social retard.
5. Automotive, Machinery. An adjustment made in the setting of the distributor of an internal-combustion engine so that the spark for ignition in each cylinder is generated later in the cycle.

6. Me. Oh, as God as my witness, most definitely me.
As I sat at my desk Tuesday morning tying up a few loose ends, my better half came in the door and exclaimed “you’re still here. Is Gigantesco Especial Pirata Serio coming today? I mean, is the show actually this weekend?”
“I don’t know” I stammered. “I called him and I haven’t heard back from him.”
Then I looked at the San Diego Custom Bicycle Show website for the hundredth and final time only to realize that I once again had catastrophically screwed the pooch in terms of maintaining any knowledge of my own schedule.
I don’t know where this complete disregard of the time space continuum comes from. Perhaps it’s partially because I didn’t know how to tell time until I was eighteen. Perhaps it’s from spending too much time in California. Perhaps it’s that I don’t have the ability to successfully accomplish much more than to put my put my pants on frontwards each day. I suspect it has a little bit to do with all of these things, but regardless of the reason, I am dreadfully tired of my absolute ninja-lke adeptness at turning everything I touch in regards to scheduling into a steaming pile of crap.
Lucky for you, I have an assortment of submissions in the form of the mail bag to rely on, because at this point, if I were left to my own devices in getting an entire post together, it would resemble something like this;

First up, from my homie Raleigh Sally (shown here, serenading a delighted young woman, while an unenthused gent sleeps peacefully in the background);
I get a blow by blow of a recent journey he took part in, just for the hell of it;

“I rode 199 miles….fixed….by myself.
I averaged 18.5 MPH with a wicked head wind after staying up until midnite putting down heavy IPA’s and tequila.
I suffered 2 flats within 2 miles of each other…and had another 125 miles to go with no more tubes.
I fought through cramps at 150 miles by slamming RedBull and snickers bars in the hopes the sugar rush would push me through it.
I pulled into town and immediately slammed 4 beers and ate a handful of chips to ‘replenish’ my depleted system. Those chips would be all I would have to eat that nite.
I then proceeded to hit up the Cabaret for some “attention” only to find the comfort I was looking for at Mary’s in the form of a firm slap from a stripper that knocked the taste out of my mouth…. Which was needed because I was so hungry.
I then woke up in a haze, hungry and weary the next day so and asked a good friend to join me, for my only real meal over the course of 36 hours, before I began my journey back to Seattle…the response I get…
”Maaan.. Gravy? Sorry, wrong guy. Call Stevil.” – CD
I would’ve kicked a puppy if I could move my legs.”
‘Why do people do these things to themselves, and why won’t their friends stop them before hand?’ was the theme of the following several emails.
A challenge is good for the soul. Be it summiting a mountain, or riding 200 miles with no food in your system on a fixed gear bicycle. It’s experiences like these that help a person feel alive and without them, we become complacent and boring.
Personally I tend to quell other people’s challenges, because as I told Sally in a final communiqué, when those around me succeed, I feel bad about myself.
Another individual from up Seattle way contacted me to let us know, one and all about some upcoming shenanigans;
“It’s time for the 3rd annual Resurrection Race in Seattle. April 3rd. This one is dubbed “The Holy Trinity.”

It would be rad if you could get the word out on your blog. The Resurrection is a ton of fun, and we’ve got some great prizes.
Also- there is a photo contest with two winners. One will take home a porteur rack from Cetma Cargo, another will win a Pelican Porteur bag from Swift Industries;

I’m excited about the Porteur rack and bag they are really well made, and are built tough. The contest goes until May 1st.
Thanks a bunch!
Ryan Schuetze”
If you find yourself around the greater Seattle area, you know what to do.
Now then, being a ridiculously overpaid, and highly sought after web log writer like myself, I occasionally am subject to the spoils of my hard work. Why, this week alone I received an envelope full of broken reflectors, a pair of fuzzy dice, and one blindingly bright light set from my pals at Portland Design Works;

I had to rely on their professional studio shot, as my trusty assistant was unwilling to allow me to shoot one of my own;

So bright are these that I actually gave myself a seizure by staring into their glow. While this was good fun for those around me, and I now have teeth marks permanently carved into my wallet to prove my folly, I wouldn’t recommend you do the same.
Anyhoo, these shine with the power of a thousand suns, and most very definably have replaced the candle in the Dixie cup that I had twist tied onto my handlebars and backpack previously.
I’m sure they are available through any shop that’s worth a damn, and when you place your order, be sure and tell them that Stevil sent you.
The resulting look of apathy alone will be worth the price of admission.
Finally, for this Wednesday’s edition, Erik got ahold of me to let us know that he’s working on something to help kick the crap out of some cancer. If you find yourself in the mood for some mountain bike hijinx, and you have plans to be at the upcoming Boggs mountain bike race, then check out Erik’s blog to get the low down.
Now I have to thank Zach for sending me this.. You should watch this, cause this rules.
This. This right here;

In parting, here is to a fine Wednesday (if that is in fact what day it is) for you all and a healthy dose of rad getting as well. 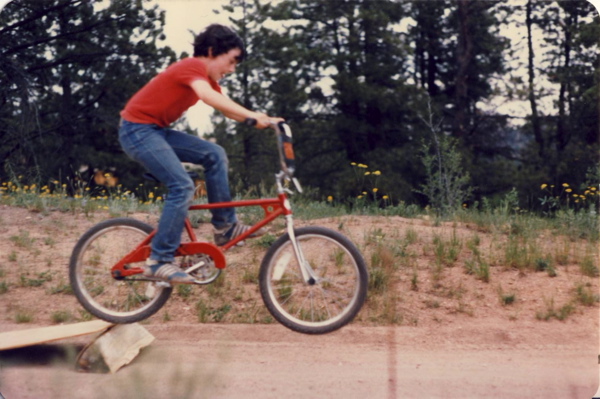