As the dust settles on the start of the week, I find myself in charge of an array of electronic correspondences, and as such will now get cracking on a bit of curation.

Before I get into any of that though, something that is on my mind is the cinematic atrocity that was Mel Gibson’s ‘What Women Want’. Before, during, and after its release I never paid it much mind, but as I sat nervously biding my time on Sunday in preparation to meet with my girlfriend’s parents to ask them for their blessing in the marriage proposal of their daughter, I took in the first 20 minutes and I have to say that in my life, I’ve never seen such an offensive bag of crap.
That is of course with the exception of actual bags of crap, but in my experience those are generally limited to San Francisco’s Tenderloin district.
It’s so bad that it is almost is worth your time to watch it, but as every second ticked off, I couldn’t believe that at no point during the production someone didn’t say, “you know? This is a terrible premise, and just generally kind of offensive. Maybe we should scrap it.” Then again, taste is relative.
Finally, to answer the burning question of why I didn’t just change the channel.. I would have, but I was hungover and my host’s remote control is far too complicated for me to understand.
It reminded me of a time I believe I’ve made note of previously. For my birthday one year I was in Flagstaff with my friend Ashley and master frame builder Steve Garro. The night consisted of cocktails and camaraderie of every shade and concluded with wide eyed strangers backing cautiously away from me as I hamfistedly attempted to make friends with them and my new Howdy Jesus doll.
The following morning all I wanted to do was watch ‘Raising Arizona’, but couldn’t figure out how to get anything on the television but the audio, so for the entirety of the film, I laid cross eyed on the futon and listened to it.
My technical ineptitude knows no bounds.
Oh yeah, and for those who might be curious, she said yes.
Anyhow, as I was saying, the time to dip into the mail bag is now.
Eric from Human Powered Transport sent me this little ditty that if you like videos of cops mowing down cops, then it is sure to make you smile;
However, I should also state a warning. If you don’t like rapid fire barrages of “oh jeez!” then I suggest you skip the clip entirely.
“seems clear to me that they were trying to ram people but they got one of their own. who the fk gives orders to behave like that?

Love, Sarah”
Anyone who goes four (4!) miles out of their way for my benefit is alright in my book.
Then from Kevin I got what has become standard fair between us;
“These are not connected to my phone, but my balls keep yer sticker warm at the stoplight.”

Not only are my stickers warm, but my heart is as well, knowing that people really do care.
Upon searching for the phone balls link, I found this;

From my perspective, the most important part of that link is this passage;
“I don’t even have an office chair anymore, I just sit around on my nuts.”
It is sometimes stunning how quickly things can slip into the gutter around here.
From Berlin, everybody’s big buddy 6’7″ sent an email to let us know how he’s living life in the old world;
“Hey Stevil,
Swimming in a sea of beer and bicycles. 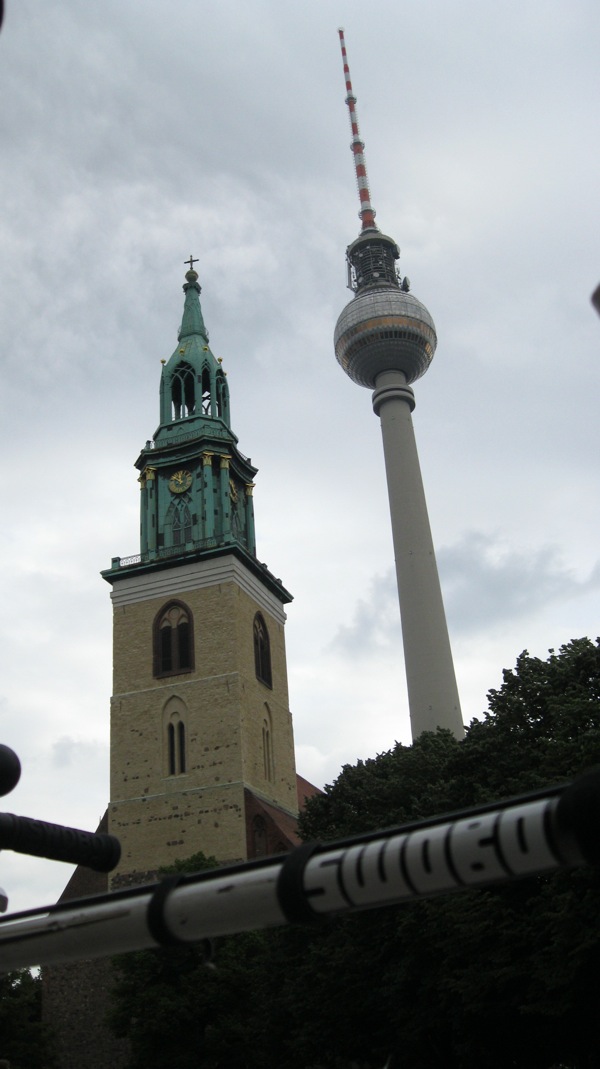 Thought I’d share a couple of shots. At the same market where I saw the hot dogs and burgers, they sell shammies right next to the tighty-whities. Proper. 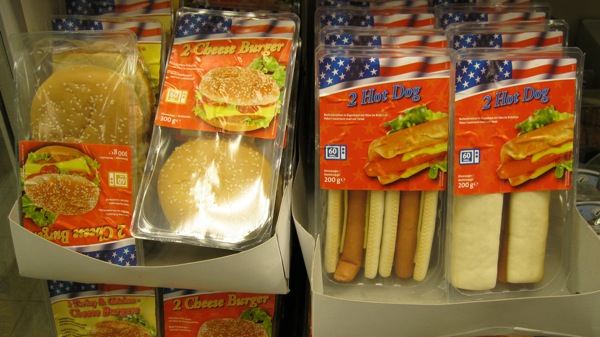 The World Cup is getting started and as Germany rolled over Australia as they did Poland a while back, the place went nuts (firecrackers, horns, screaming out windows for hours afterwards). And this is just a priliminary round. Kinda scary.
Anyway, thought you might appreciate the update.
Hope it all good in the woods,
-kb”
Europa is definitely the place to be during the World Cup. Many years ago while waiting for a train in Marseille I happened into a bar that was jam packed with drunken French fütbool fans, and before I knew it, I was swept into the melee, arm in arm with my compatriots singing some national anthem or another.
“UUGGHHH! ARE YOU HERE TO WATCH THE MATCH?!” they’d slur.
“Uh, yeah. I think I am.” I stammered.
“ARRRGGHHRIGHT! WHO’S YOUR FAVORITE TEAM?!” They’d respond.
“My favorite team is your favorite team” I would wisely reply.
My greatest fear was that someone might see me as the impostor that I was and call me out just before beating me up and leaving my lifeless body in the street.
Not relating to any of that, Ishmail sent an email that I feel as though I should post right about here;
“Stevil,
Having seen some of your fine work and knowing that you’re a dabbler in the dark art of photoshop, I figured you could appreciate this image.

I couldn’t resist and I think it turned out pretty good. What’s even more hilarious to me is that a 6ft piss cup actually did show up at my nephew’s 3rd birthday party! I guess all the clowns and magicians were booked that day.
Here’s the post that Petey the Pee Cup inspired:
Ishmail”
Next year you should book ‘Sally the Syringe’. She’s always a huge smash at kid’s parties.
Having recently been accused of pandering to an upper middle class white collar roadie segment by some dirts in ‘Bama, it was requested that I ‘bring it back to center’ with some High On Fire, so I suppose now is as good a time to do that as any;

To quote a commenter on this particular video-
“Matt Pike’s teeth are the reason you don’t do drugs. Matt Pike’s guitar is the reason you﻿ DO do drugs.”
But back to the original observation, I should say that this table that we all find ourselves sitting at three days a week is big, and round and has plenty of room for everyone. No one is ever excluded from our ranks.
Except for dicks. The dicks have to stay outside.
Finally, in closing, and speaking of dicks, (and I mean that in the nicest way possible. Some of my best friends are dicks) I recieved and email from an individual who initially had some biting words of criticism on the tool bag issue who goes by the name Levi;
“Dear Stevil,
I thought I was a little harsh in my criticism of those tool bags that were sent to you. I work an unenviable desk job and don’t deserve to be talking what I think is called trash. So I tried my hand at making a bag of my own–see attached pictures.

My humor is decidedly low-brow so I thought I would use mostly middle-brow materials so other readers would get the impression that I am not a total philistine.
I am no dismal scientist, but if you wanted to market these bags on your website, with practice I could adopt a division of labor (I have children) and churn them out as fast as Adam Smith’s pin-makers made pins.
Your blog is good fun!
Levi Johnston”
In response to his email I said simply;
“It’s been fun seeing people’s opinions on the matter. I never know how folks will respond to anything I put up. I sometimes expect that one thing I might post will generate all kinds of passionate responses, and I get nil. Then I put up a photo of a tool bag and folks come crawling out of the woodwork.
I like to look at it like this; I hate the show ‘American Choppers’, and I think those guys are total hacks, but the dynamic that exists between them is what I’m attracted to. They can fight with each other tooth and nail, but at the end of the day, nobody goes to bed mad, because ultimately they respect each other’s opinion, regardless of the fact that it might differ from their own.. (And yes, this all despite the fact that they are suing each other.)
I think a similar dynamic exists among the community that spends time on the web log. Of course no one expects everyone to feel the same way that they might, but everyone respects the fact that we all are entitled to our own opinions about things and that we are all open minded enough to see both sides of the conversation.
I think that is a hugely unique and extraordinarily special thing.”
This is the truth, folks, and from the bottom of my heart I appreciate this quality endlessly.
If it’s good enough for Mel Gibson, then it’s good enough for me.

27 Responses to “Picking it up, laying it down, and picking it up again.”