After Saturday’s festivities, my personal thousand yard stare had increased by at least an extra 1,500 yards. 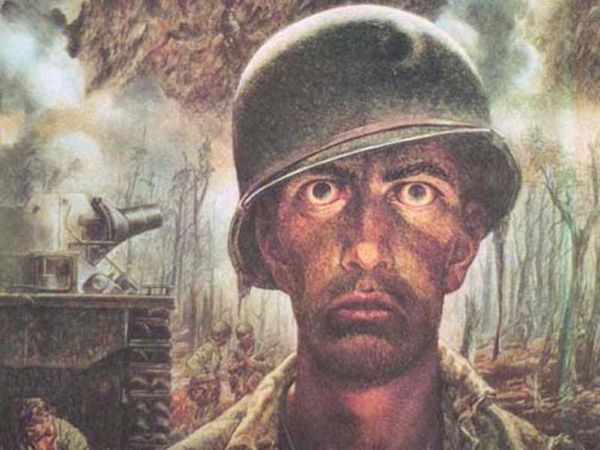 It was with the additional yardage that I trudged to Rick Hunter’s mountain top shop early Sunday morning to grab him, his cardboard recycler’s truck, and a metric shit ton of random bike stuff to go and stake our claim in the parking lot of Bruce Gordon’s swap meet;

The reason I was enlisted to assist The Stick on this venture was due to the fact old Rick just had one of his wings operated on to remedy some burst ligaments. Of the many downsides he is currently experiencing, not being able to shift a manual transmission is one. We made it to the North Bay with quickness and immediately got to setting up our shanty town;

It’s always amazing to me what people will pay good money for at these things, but truth be told, there were some pretty bad ass deals to be found, and as I watched money and goods exchanging hands at a lightening pace, my chair became more and more comfortable. At the day’s end, and with everyone enjoying pockets full of cash, I ducked in to Papa Bruce’s shop and snapped a couple spy photos of some items that caught my fancy;
First off, this Triumph and side car, which if Bruce had any friends, he would give them rides in;

If I was ten feet tall, I could make a bit of beautiful music on that thing.
A slew of us left to find a post-swap feast, where stories were swapped and lies were told. At the meal’s end I took the opportunity to leave my mark;

Photo courtesy of the Retrotec/Inglis Cycles.
With full bellies we eventually got back on the road, while rock blocks of Boston carried us home. I dropped Rick off, jumped in my load and split the darkness until I found my pillow, which I hit at one hundred miles an hour.
However I knew what sort of treasures were waiting for me in my inbox, as I had just gotten hints of it the day before.
Wizard Staff fever had hit an all time high, and folks were thoughtfully sending me imagery in numbers.
Instead of showcase them in a single post, I’ve begun a collection on my Flickr page which can be found here.
For a while it seemed as though the British Columbians and then the Portlandians were solidly the most wizardy among us, until Shifter Bikes Dan and his crew came along and kicked the crap out of everybody;

On the chance I wasn’t clear on his accomplishments, he included an email as well;
“Right – here’s my effort.
It’s a shit photo, because Benzy was a little wobbly…I’ll send through another one that’s a touch clearer…
The tech specs of the staff are kind of cool though… we have pre mixed cans here, so half of the staff is beer, the other half Jim Beam Black and coke – they are strong bad boys – 6% cans. Had one more after the pic, and actually got to the roof…”
So not only were the Aussies drinking beer, but they were mixing it with Whisky and cokes.
From previous times spent in Dan’s (as well as some of his countrymen’s) company, I’m well aware that they have a bit of a tough constitution. I guess I never knew exactly how tough until now.
Moving on a bit.. Right around the middle of April a fellow named Evan hosted a bicycle event in the Eastern portion of the Bay Area. This event included a route that was of a mixed terrain fashion. I was balled up, or out of town, or asleep, or something, and as such, unfortunately unable to attend. In the week following the event I received bits and pieces of information regarding how the throw down went down, but it wasn’t until I stumbled across the following video put together by Hans Kellner that I realized how much fun I missed out on;

I’m proud to be a part of events like these, even if I’m not physically a part of them.
In a final corner of the mail bag, Andy sent on what I guess would be considered a public service announcement;

I’ve long wondered what is in the corner that Jesus is looking at, and thanks to the miracle of modern technology, I now finally know;

His 1000 yard stare was into his destiny.

3 Responses to “Staring, steering and stairing.”