Of course ruining the race for everybody was easy, but last week I came to find out through an internet exchange that this website is at least partially responsible for keeping women out of cycling.

If there is one thing I enjoy about being involved in the bike industry these last sixteen years, it’s the lack of women.

However I have seen an uptick in the numbers of non men in shops, trade shows, group rides, races and the like, which is specifically why I started this site… To put the clamp down on this increase and make sure my beloved industry remains chock full of moustaches and dick jokes, forever.

Beyond that, as you all may or may not know, the high school mountain bike league has been a thing I’ve been involved with in some capacity or another since its humble beginnings. You see, this was just another ploy to undermine the involvement of anyone in the bike world besides my friends (who are men) or me (who sort of is a man). As a matter of fact, I spent a wee bit of time attending a recent league camp where I got a first hand look at the enthusiasm I was about to undo;

With quickness, I leaned in close to a few of the young women and told them to just drop their bikes and walk away as they would never amount to anything;

As for the boys in the group, they were a tougher nut to crack, primarily because I couldn’t catch any of them, but their time will come;

I’m a one man ruining machine.
You’ll thank me someday.

Speaking of which, I just took delivery of these;

Which for the unobservant in our midst, I offer this;

That’s right.. Produced by none other than Sticker Robot themselves, these high quality vinyl decals (or ‘deckalls‘ if you’re Canadian) will go well with your passive/aggressive civil disobedience.

Pick up a batch and spread the word.

With random transmissions documenting said event actually coming in from around the world, I feel like a proud father of a horrendously disfigured baby.

In our little corner of the playground, we had a mountain bike race, the proceeds from which benefited the state park where it was held. As much as I ended up dreading the thought of both riding my bike through the 28 miles of jagged rock and technical misery while immersing myself into a stupor, I had a goal in mind, and failing this task would be failing myself, which I only do once a month.

Seeing as I already have June’s failure in the bag, it simply wasn’t an option.
The breakdown went thusly.. I first met Yafro and Devon at their home. While waiting I noted that their garage might make anyone who thinks they have too many toys, reassess;

We then drove to the little town of Petaluma to meet up with Soulcraft Sean, at which time we ate some food, drank some beer, and looked at some vintage BMX magazines;

Eventually I fell asleep watching a documentary about Don Rickles, and dreamt dreams of racist jokes and sleeping on the floor.

Bright and early the following morning, Sean and I departed with the primary plan to clog up the back of the race. We had decided to do this for two reasons. One was due to the fact that we would be drunk (clearly), and two was to tow the line with Big Steve P, who I don’t think has ever done better than absolute DFL at any race he’s entered.

Understand though dear reader, that this means while, say for example fast folks might finish an event in two and a half hours, Steve will finish it in four.. Or five.. Or six. But he consistently finishes. The sun might be down and the crowds will have gone home, but he sticks it out until the bitter end, and is always something to behold.

So with these two tasks at hand, we set fourth, and so as to not subject you to anymore jibber jabber, I’ll simply throw up a selection of photos and let you draw your own conclusions.

We had a neutral roll out, so we did our best to fall as far off the back as we possibly could;

Eventually on up the way we came across Bobby McMullen;

If you don’t know about Bobby, watch this clip, and then take a minute to pick your jaw off the floor;

Rolling along behind him and his seeing eye girlfriend, I realized that I don’t think Bobby is actually blind, but just pretending in order to get attention. After seeing him ride in person, I can’t wrap my mind around the fact that he does what he does. It really is an amazing thing to witness.

Eventually the trail opened up into a short paved section where we were able to give up some high fives and hellos. Before long however it was time for him to get back to business and we continued on our way.

Leap frogging along with Steve, Sean and I would stop periodically and drink a beer, and more often than not, give some food to a hapless soul who was cracked on the side of the trail or assist in remedying a mechanical.

Or simply to hang out with a group of individuals who, in honor of the last time an officially sanctioned race occured here, were all racing period correct bicycles;

Not to sound boastful, but in all of my years of racing bikes, I’ve never seen the back of the field before. People were talking with one another and generally enjoying watching the world pass beneath their tires.

Of course there was the dark side as well, which consisted of folks who were in well over their head, and were either repeatedly crashing themselves out or hadn’t taken on enough food or water and were grenaded in the shade of a tree.

Anyway, our directive was to finish with Big Steve, to drink as many beers as we could while navigating the technical course, and to not shed any blood or break any bones in the process. As the day ambled along, we were looking reasonably successful;

Before too long the finish line was in sight, and we pulled to the side to drink our final beers, and wait for Steve;

Victorious in our lack of effort (at least in a physical regard) we crossed the line with staffs held high, taking second, third and final DFL for the day, but emerged victorious in the realm of cylindrical construction; 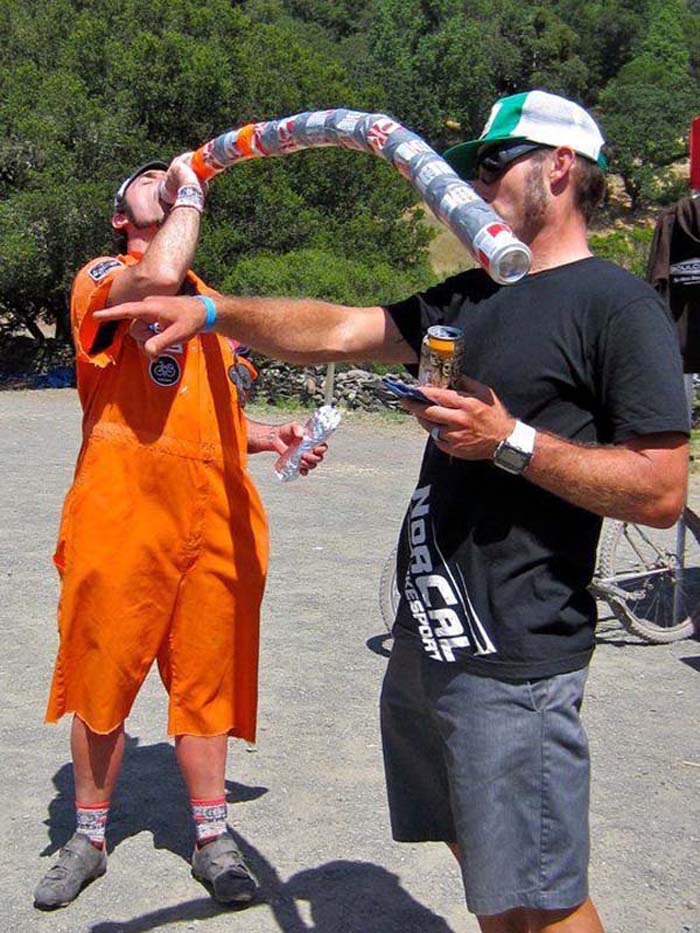 As I mentioned previously, an assortment of photos and reports have been trickling in, which I’m sure will be detailed here in the coming week. Staffs of every shape, size and configuration were assembled in honor of this day, and I look forward to featuring them all.
Aside from ruining cross racing, and ruining the bike world for women, it looks like I can add ruining people’s livers to my list of achievement as well. You have to shine where you can, I guess.

It’s not bad work if you can get it.

12 Responses to “Ruining everything is a full time job.”