As I mentioned on Friday, I split town for a few days and have returned with a saga; 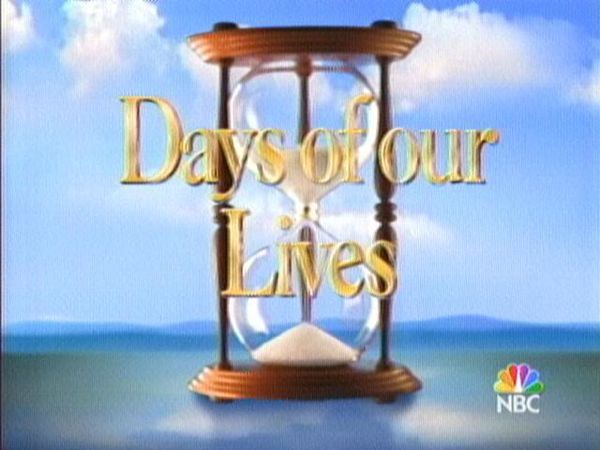 What started out as a mini-secret between JennO and myself, turned into a full blown (Sylvester Stallone) conspiracy, as her husband and partner in the One On One Bicycles empire, GeneO, was set to celebrate the first anniversary of his twenty-fifth birthday and I was to somehow be involved. To surprise the old man, JMac and myself made a trip to Portland East under the cloak of darkness on Saturday morning, bringing with us our most freshly pressed pair of drinking pants; 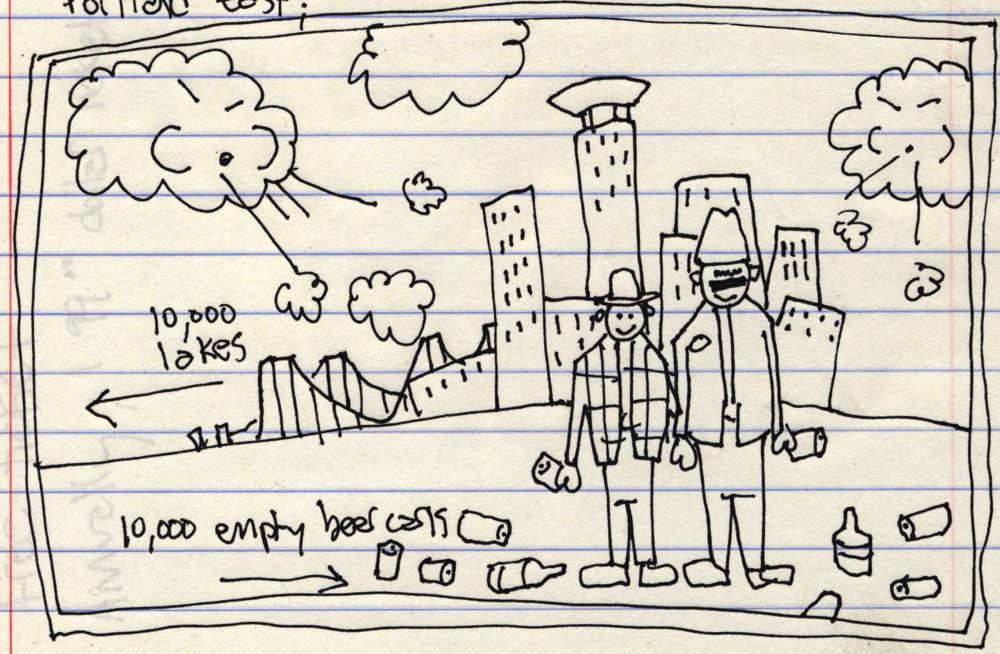 All I had heard was that he wanted no party, but rather had intended on building a fire next to the Mississippi river and watching the sun rise. Of course nothing so simple can be, as the gaggle of local would-be revelers instead all converged on Hurl’s house, leaving the surprisers and the birthday boy at home drinking out of a gigantic box of beer on our own.

To paraphrase the old adage, the best laid plans, are not.

Regardless of the initial plan going completely off the rails, J and I stashed ourselves until Gene came home and emerged from our hiding place to wish him our best and our loudest; 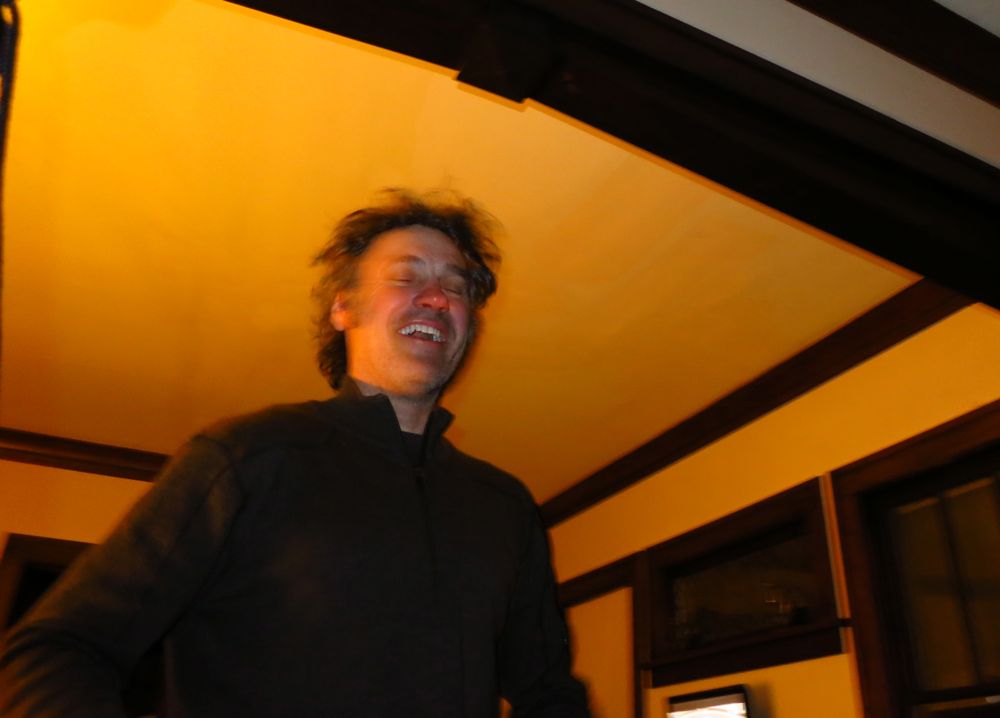 I’m not entirely sure, but I think the gesture might have even lead to some eye precipitation; 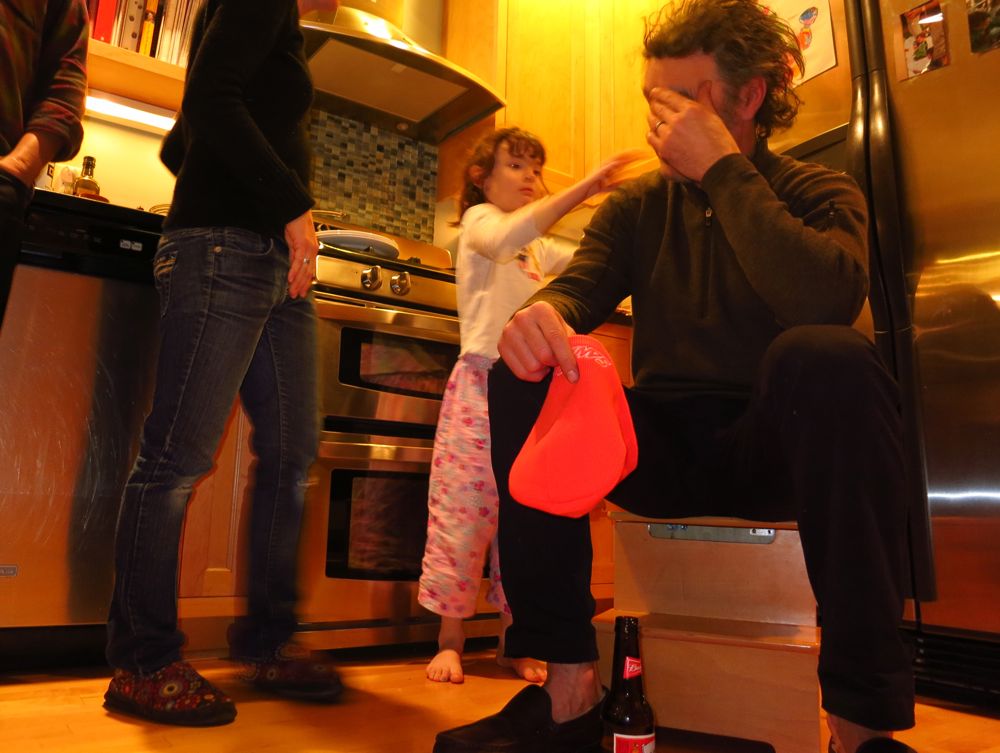 They could have been tears of joy, or possibly tears at the thought of what the next two days would have in store.

We kept the raging to a dull roar on the first night and woke up the following morning committed to our original directive. Packing a bag full of libations and stuffing the little Os into their Stay-Puff winter suits, we walked to the falls, which I have convinced myself eventually drain into the cleansing waters of Lake Minnetonka; 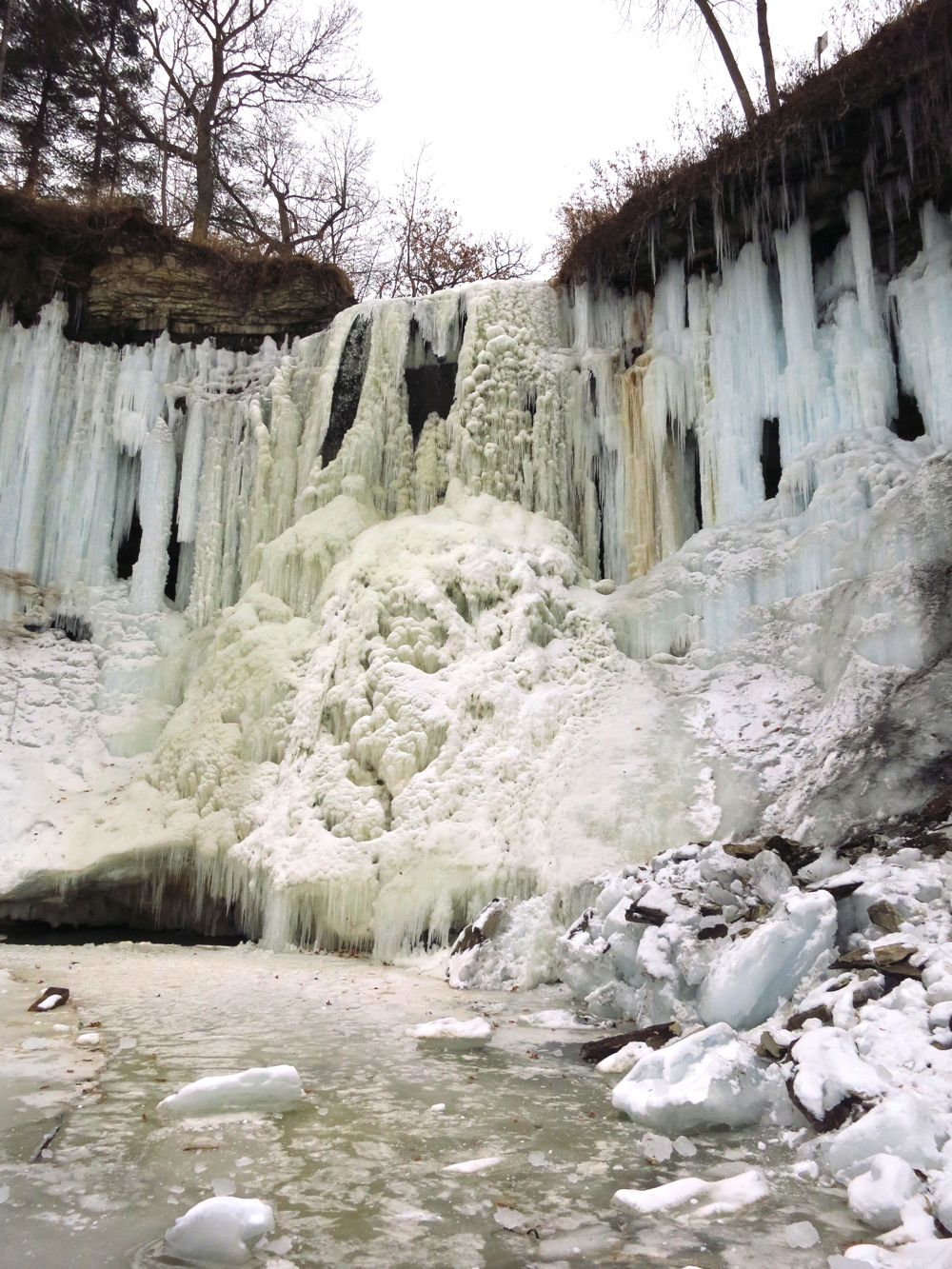 Sadly for me, Apollonia was nowhere to be seen.

Anyhow, we continued on our way; 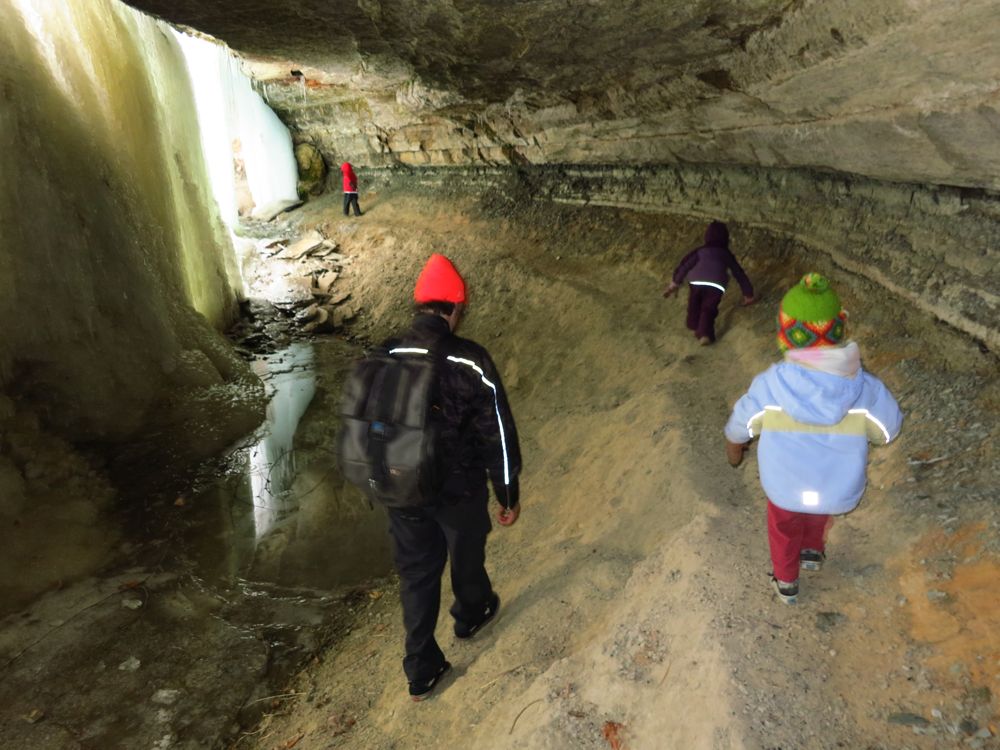 And finally arrived at the spot where we would make things on fire; 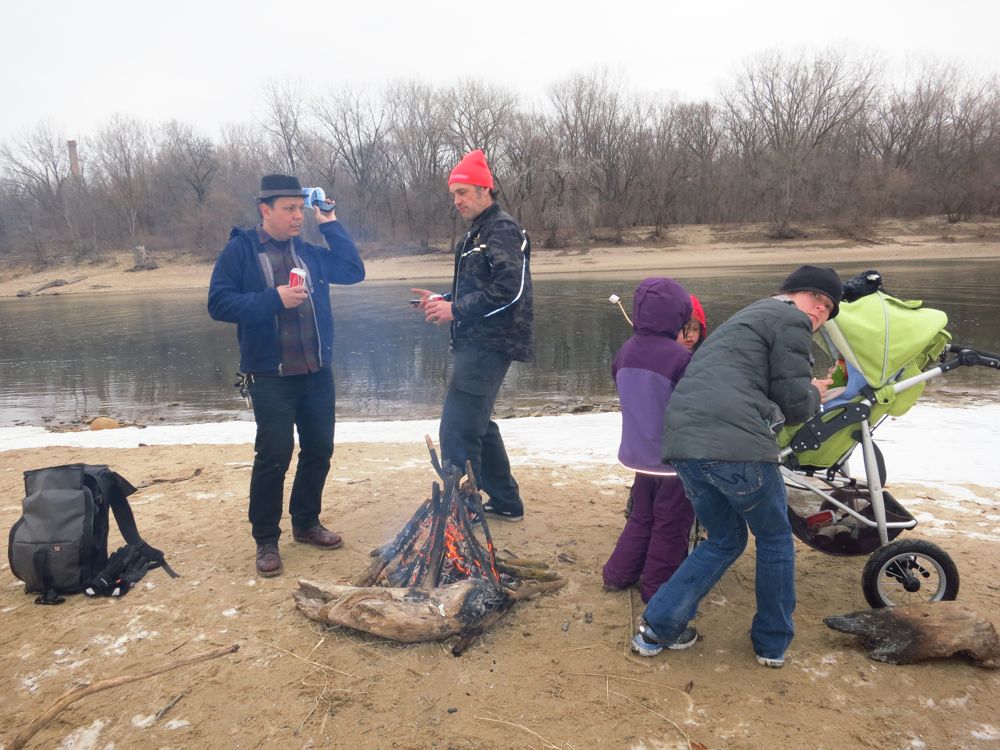 J has his phone in a cup to make the music louder. It is, what his better half referred to as his ‘ghetto amplification system’, which by the way, if you type into the Googles, yields this result; 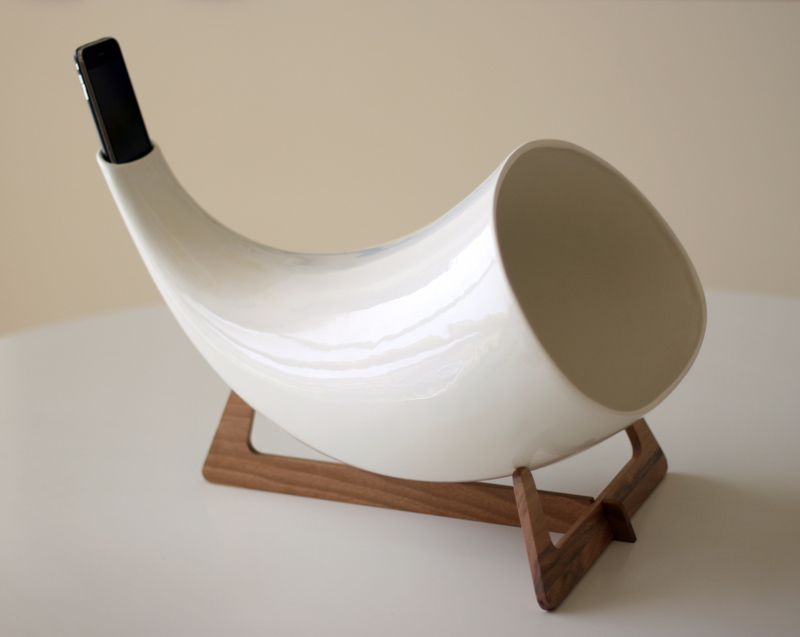 We hung out on the beach and watched the smoke rise into the sky while discussing matters of life, love and everything in between; 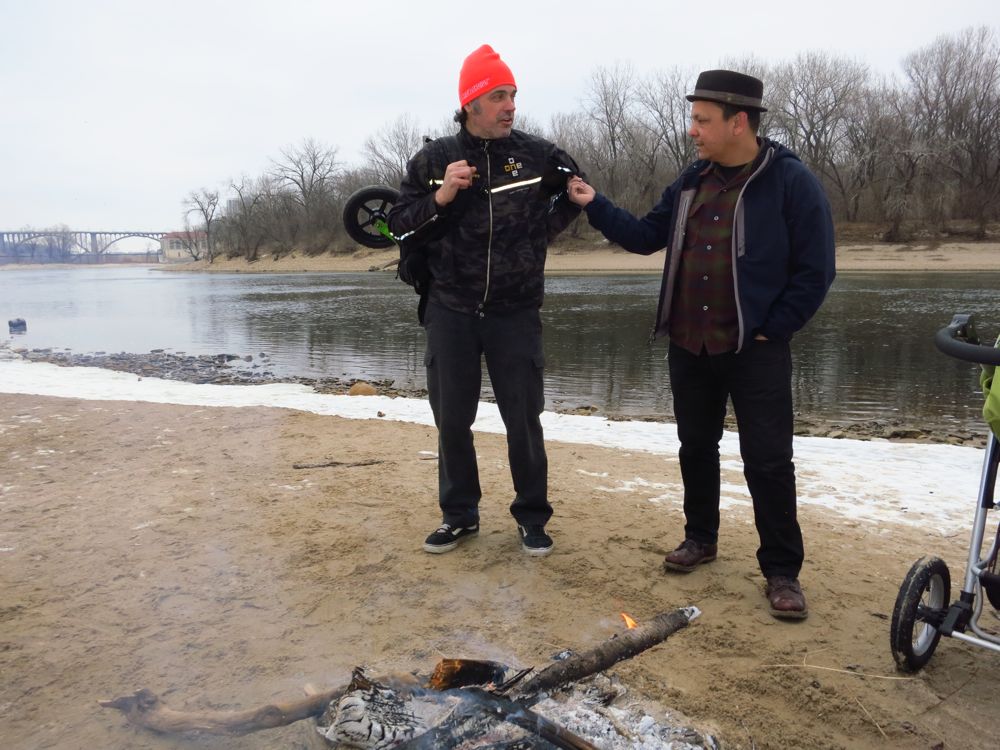 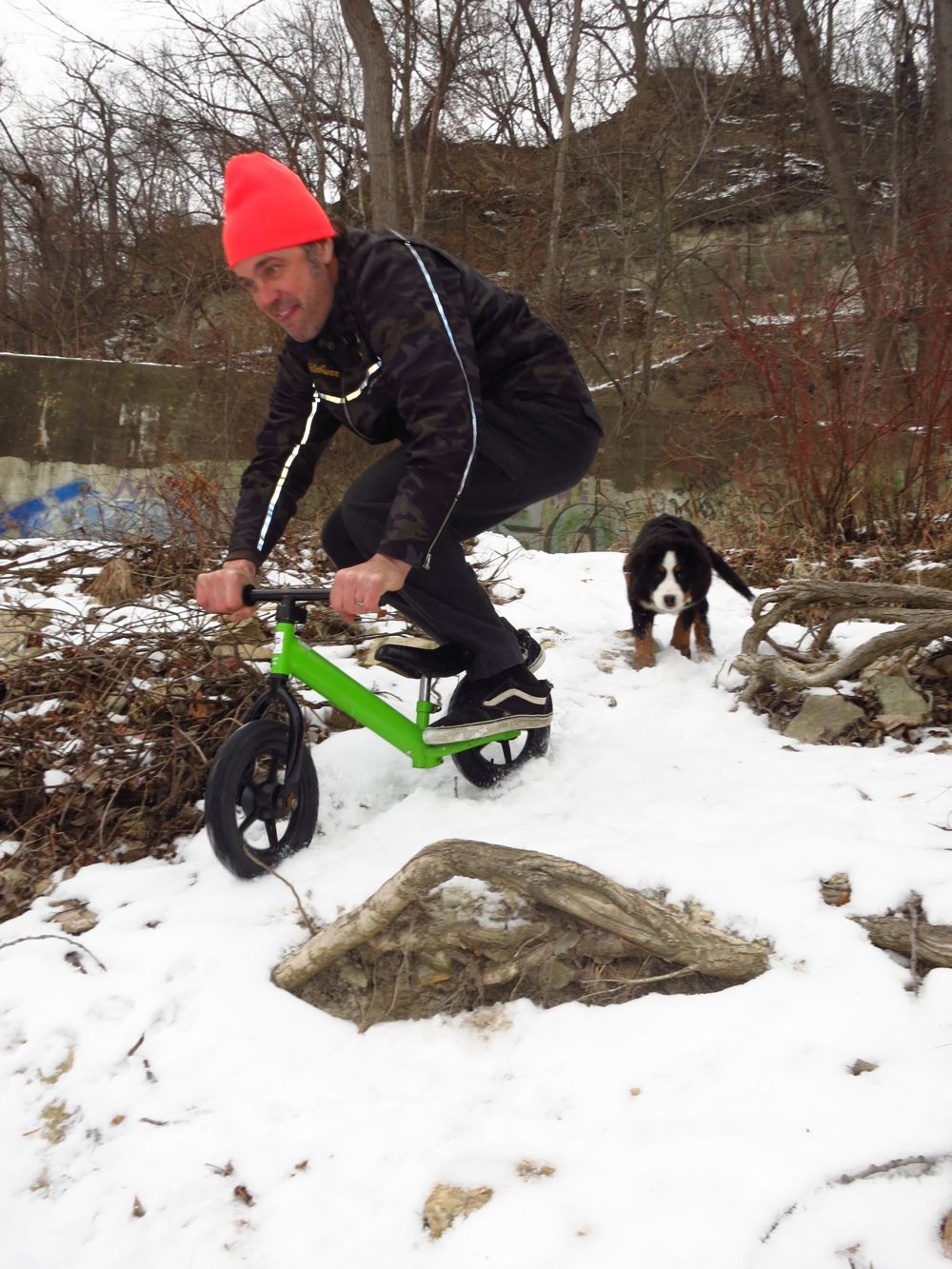 Go ahead and hang up with child protective services. Hanna is drinking melted snow out of that can.

We spent the day burning whatever we could find, until the sun started to drop and we had to return home to prepare for a dinner reservation later that evening. Of course when you’ve spent two days drinking in the same clothes, ‘preparing for dinner’ is really just washing your hands. We arrived at the schmancy taco/tequila bar downtown and met up with a few friends. At this point, things get fuzzy, but this is why I bring a camera around; 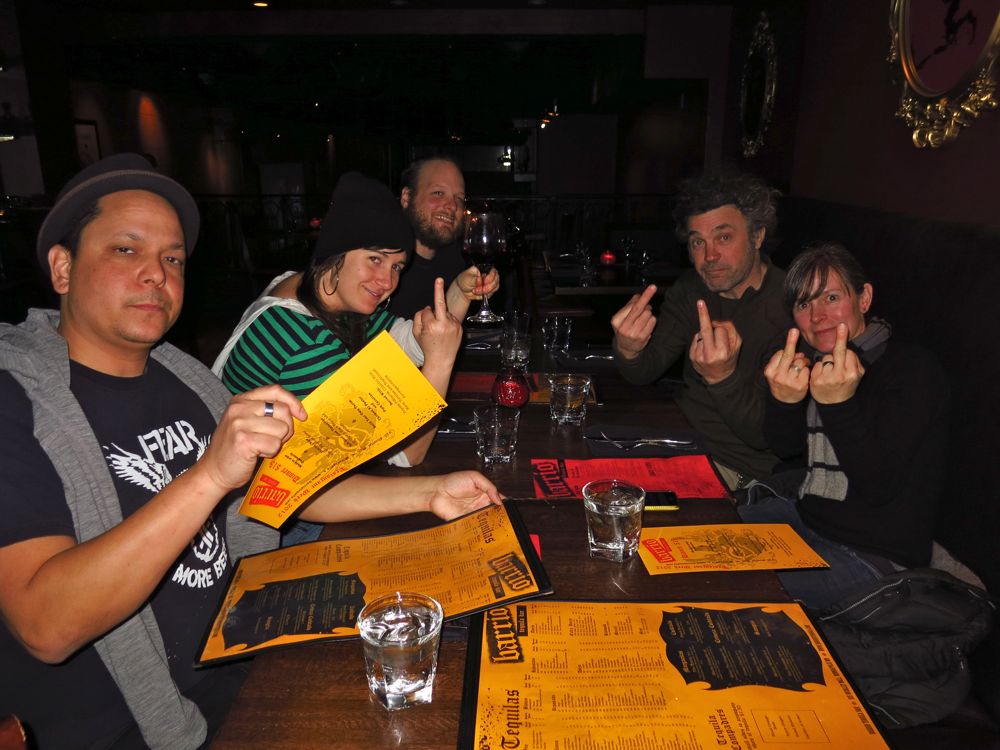 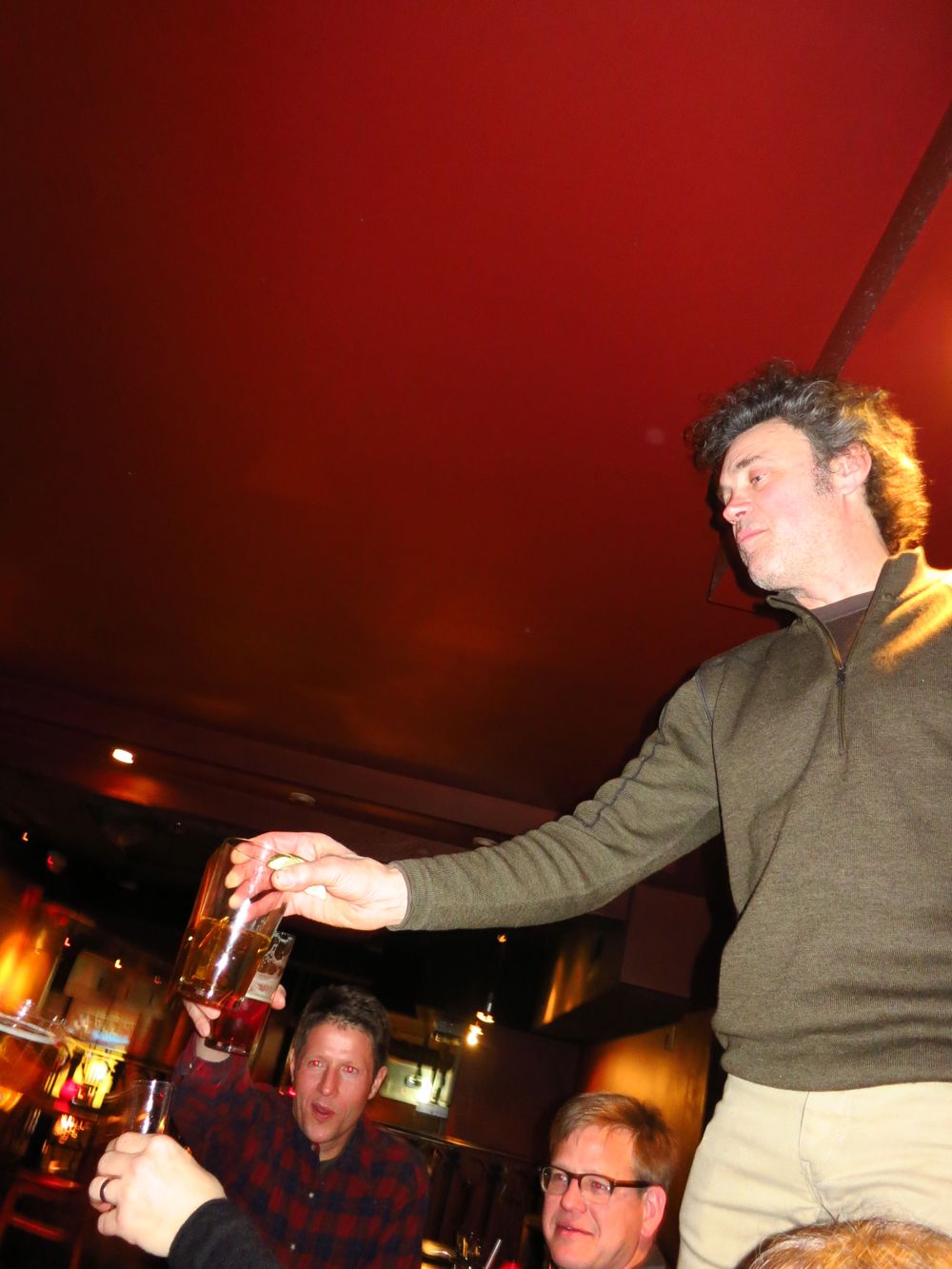 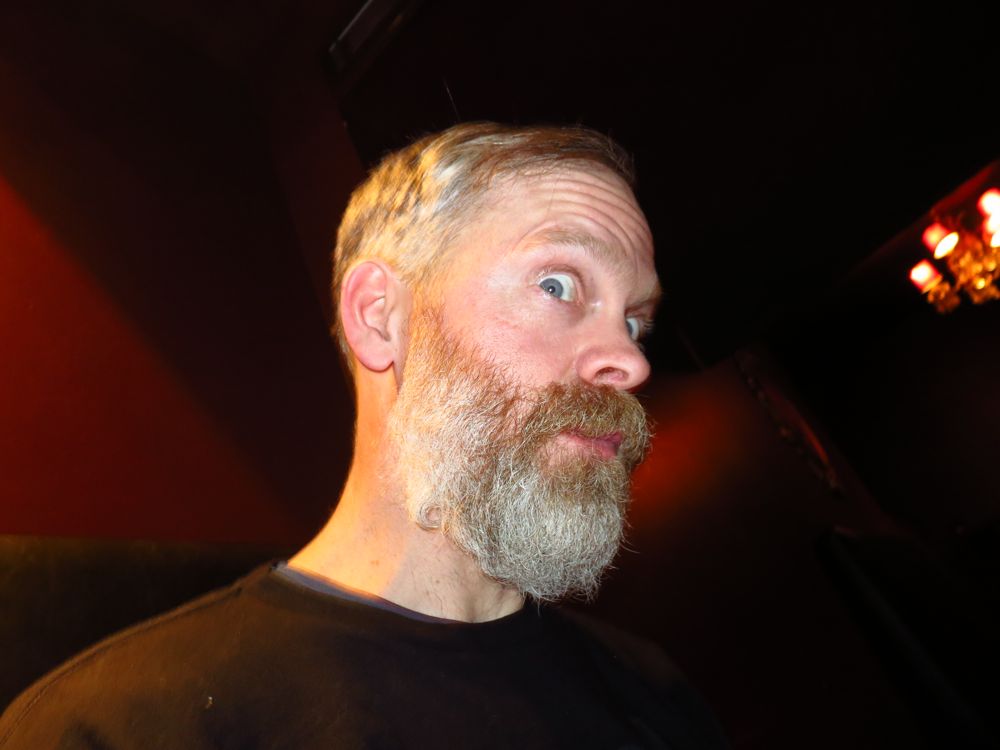 After dinner, I parted ways with my compatriots to steal away with an old friend who I had long lost contact with. After a quick session of ‘what have you been up to for the last decade?’, we said our goodbyes and she dropped me back at The Studio, where I jumped in with both feet; 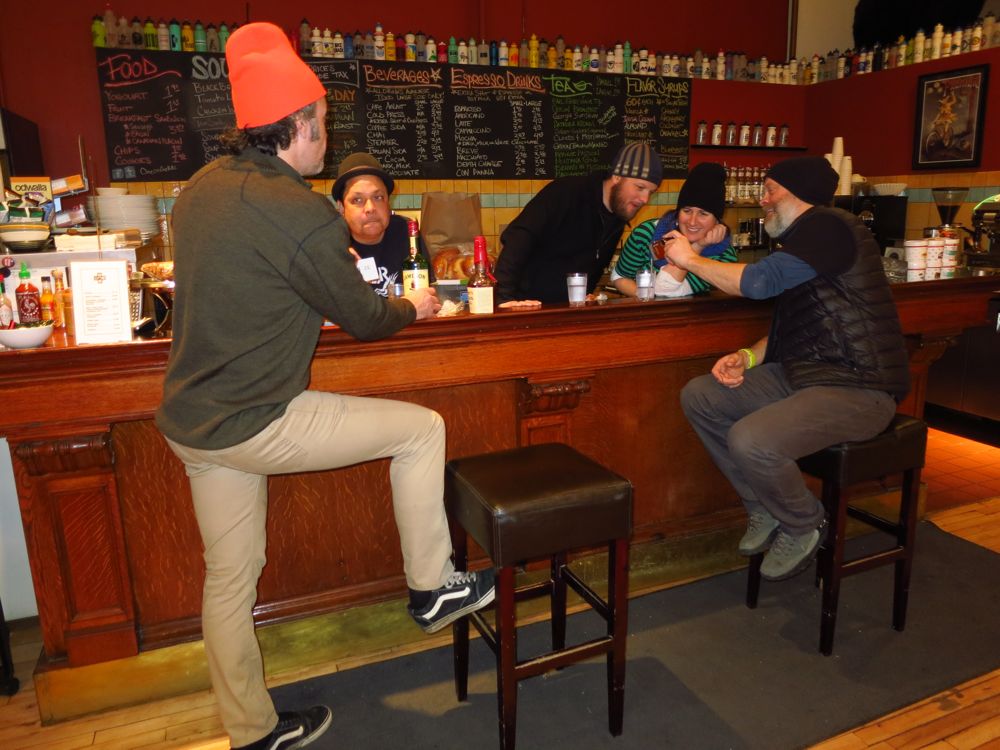 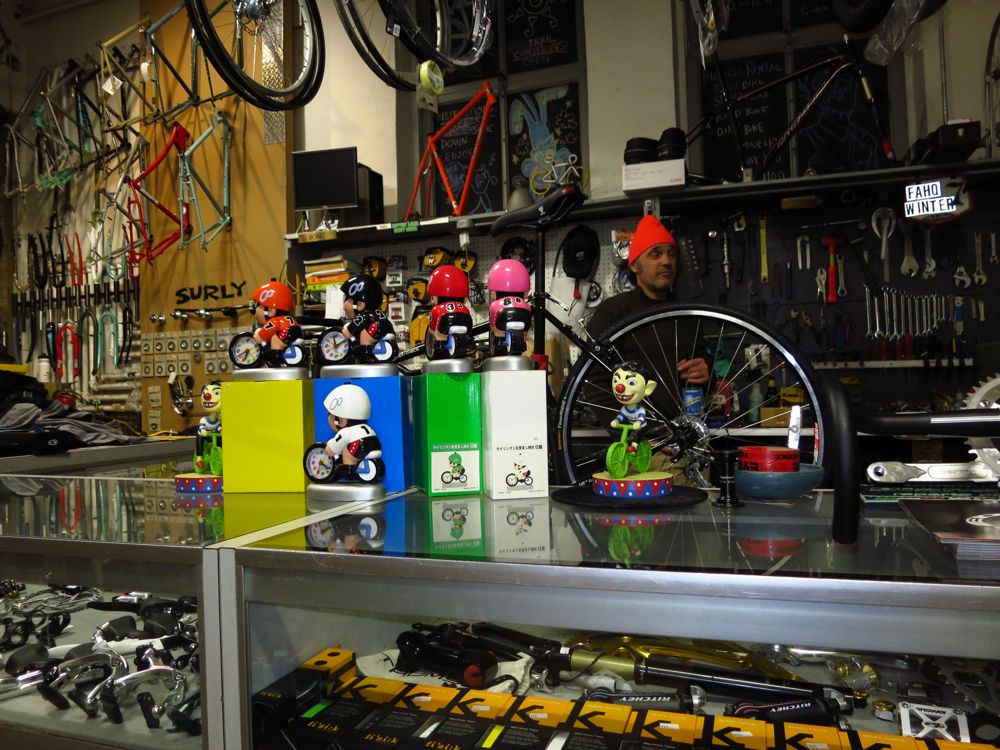 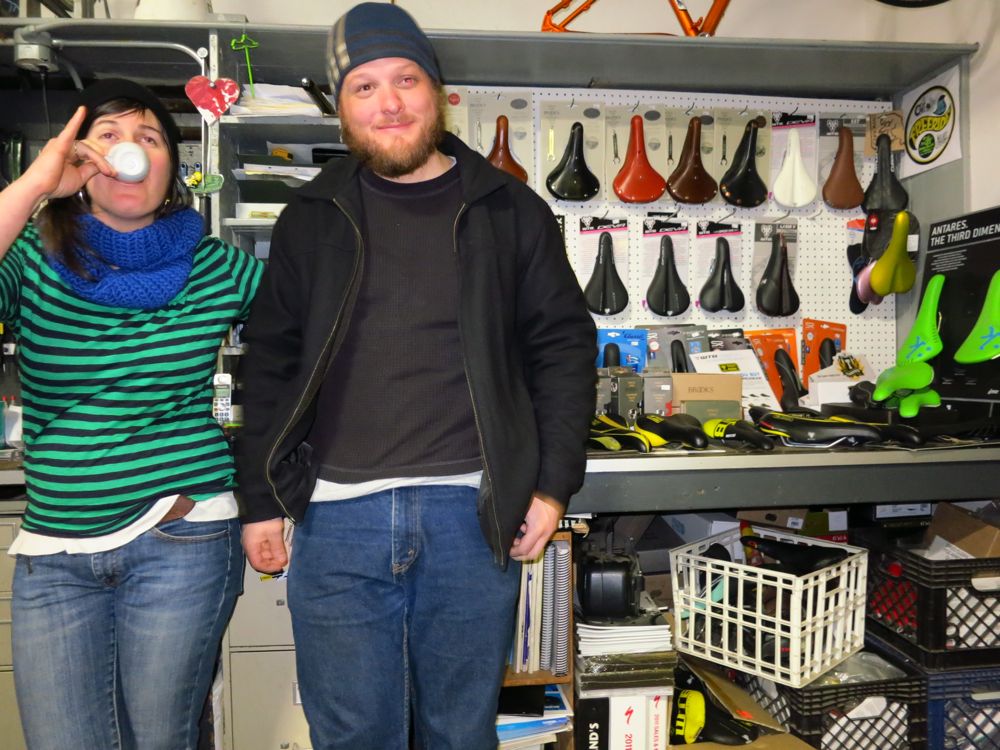 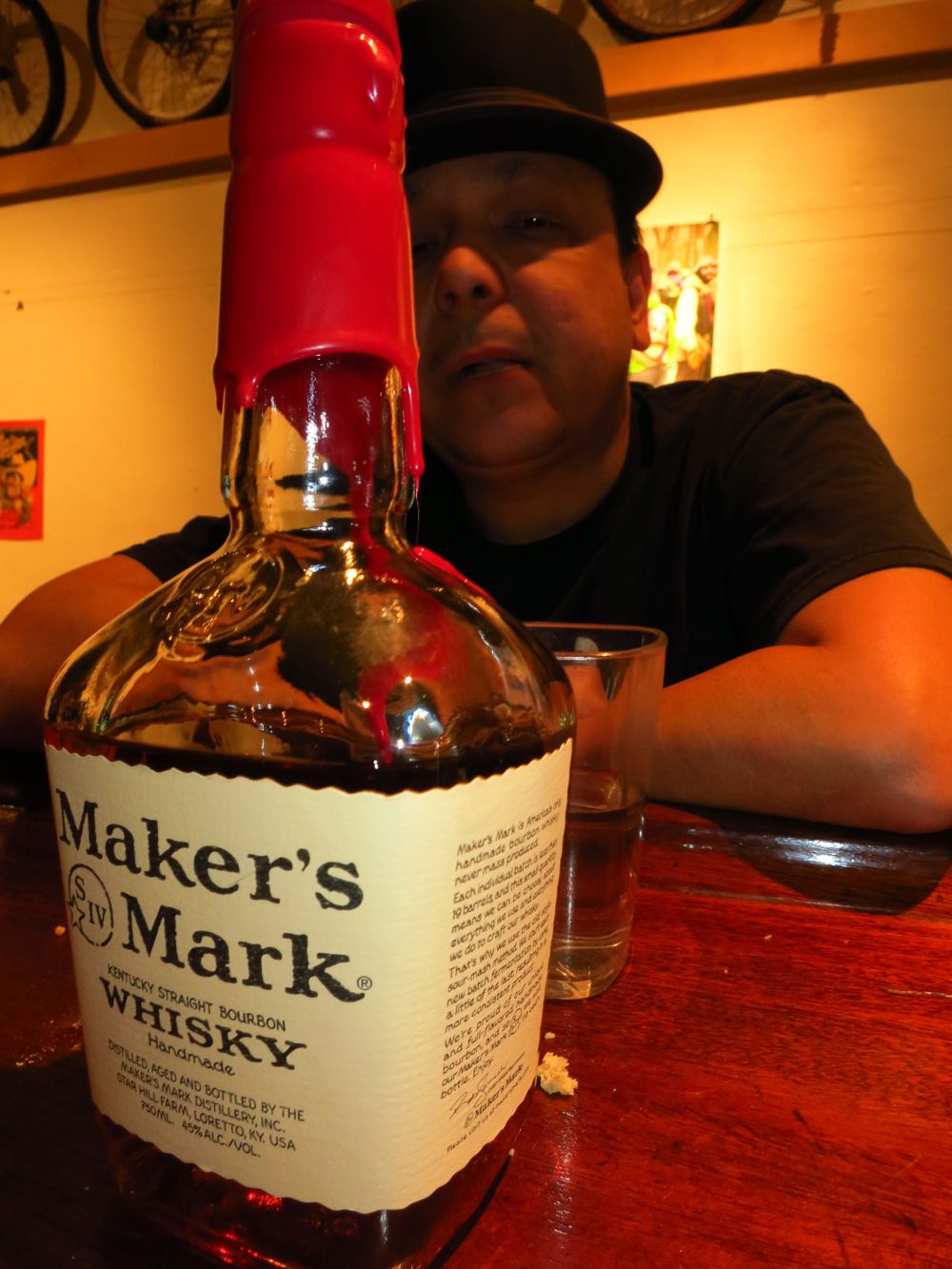 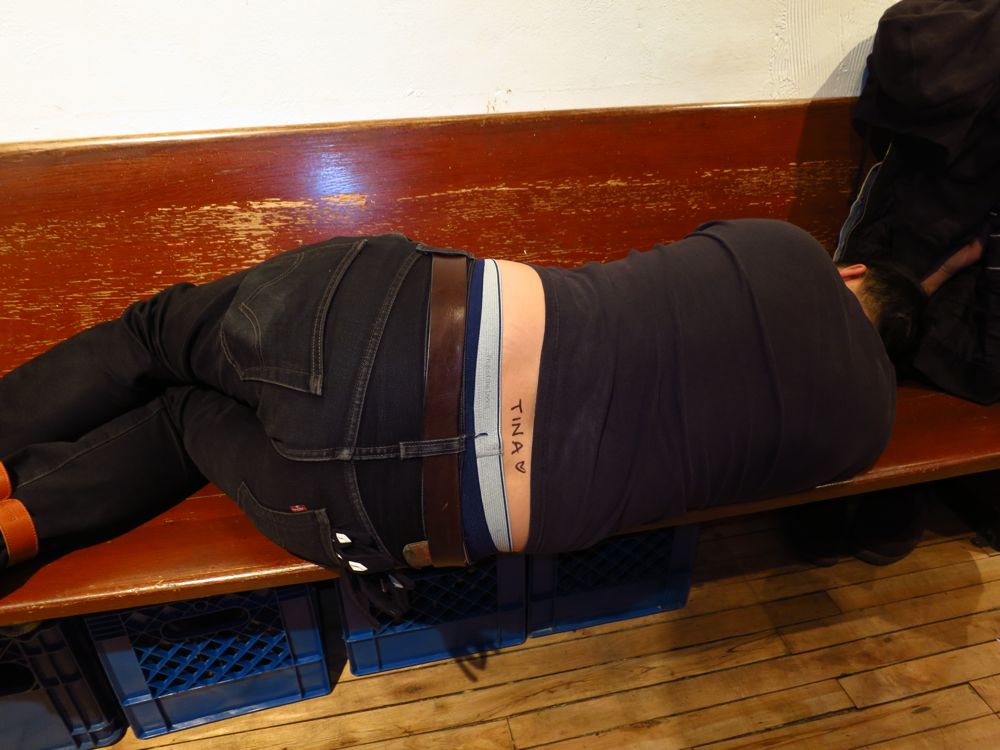 All of this resulted in two noteworthy occurrences. The first of which was GeneO mentioning that he’d been discussing organizing an installation of Shellac posters with the band’s drummer, Todd Trainer. Of the details that were proposed, the most exciting was Todd’s suggestion that I curate the shows. Gene and I did our best to spitball concepts but mostly we just spit up on each other. Certainly, if this develops further along past the talking stage, then I will most certainly blow it up as best I can here. It would be an incredible opportunity for me to work with a band I hold dear, filled with a number of examples of art that doesn’t suck; The second of the two previously mentioned noteworthy occurrences was JMac nearly exploding all over the inside of Brauer’s car; 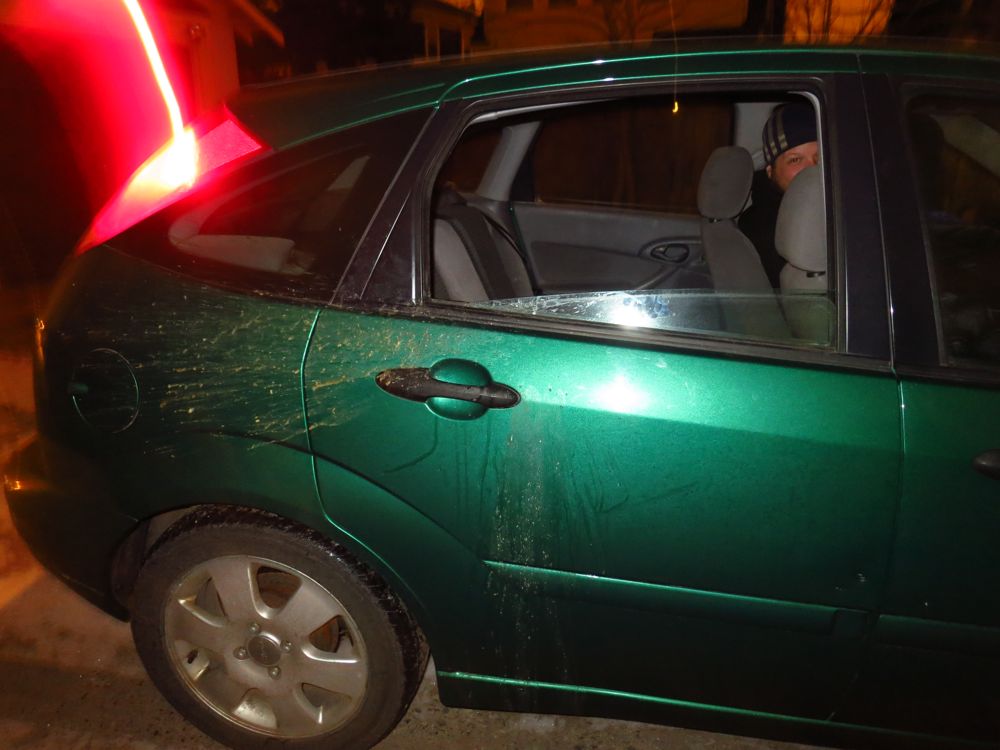 I’ve known, ridden with, raced with, traveled with and bendered along side of J for sixteen years and though I’ve seen him do a number of ridiculous things, I’ve never seen him A) barf and/or B) barf in front of my face while leaning over me and propping himself up on my leg.

Sometimes being friends with my friends is like hanging out with a bunch of car sick four year olds.

But as is sometimes said, “like sands through the hourglass, so are the days of our lives.”

15 Responses to “Alice Horton ain’t got nothin’ on me.”