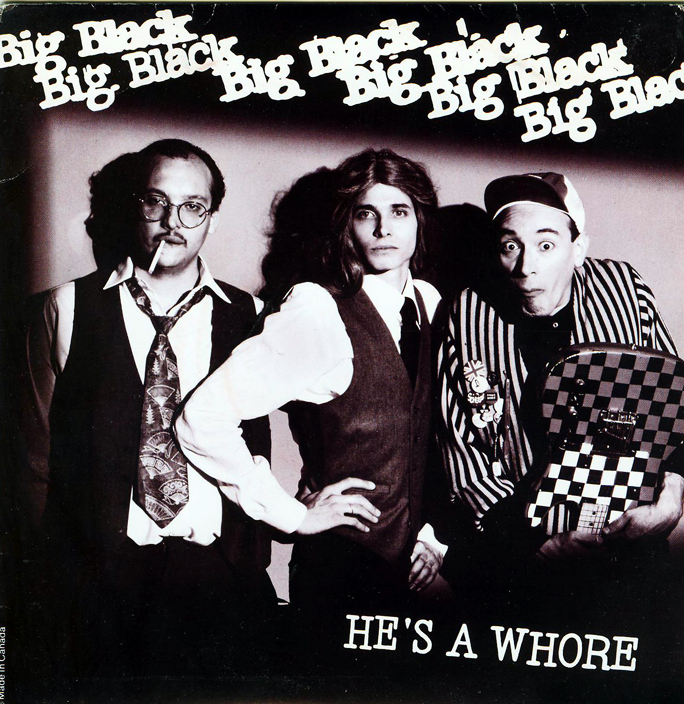 At least as far as the confines of this blog site is concerned, and sometimes other places too.

Cheap Trick knows what I mean.

And part of my whoring duties is to pleasure those residing in Chez Maximo Supremo. Luckily for everyone concerned, the Maximum Supremacists have all been hand picked by me based on the fact that I like what it is that they do, and I want them to support me supporting them supporting me supporting them. For the most part they sit in their respective corners and glare at me un-approvingly over their bifocals, but occasionally one will send a dispatch over the airwaves with a request to pay them some personal mind, which of course I will do gladly because I exist solely to make people happy.

Why, it was just a week or two ago when Peter from Surly Bikecycle and Bikecycle Parts Company got in touch and asked if I wouldn’t mind giving a new project they have cooking a little bit of traction.

“Of course I wouldn’t mind” I said, to which Peter responded “to sweeten the deal, I’ll send you one what of which we’re asking for the traction about.”

Never one to turn down free stuff unless it’s broken Tupperware, or an empty mayonnaise jar filled with soiled underthings, I enthusiastically said yes.

A few days later a package arrived containing one of these; It’s woolie, and snugly and as soon as I put it on, while making a small mid-morning snack, I looked like this; 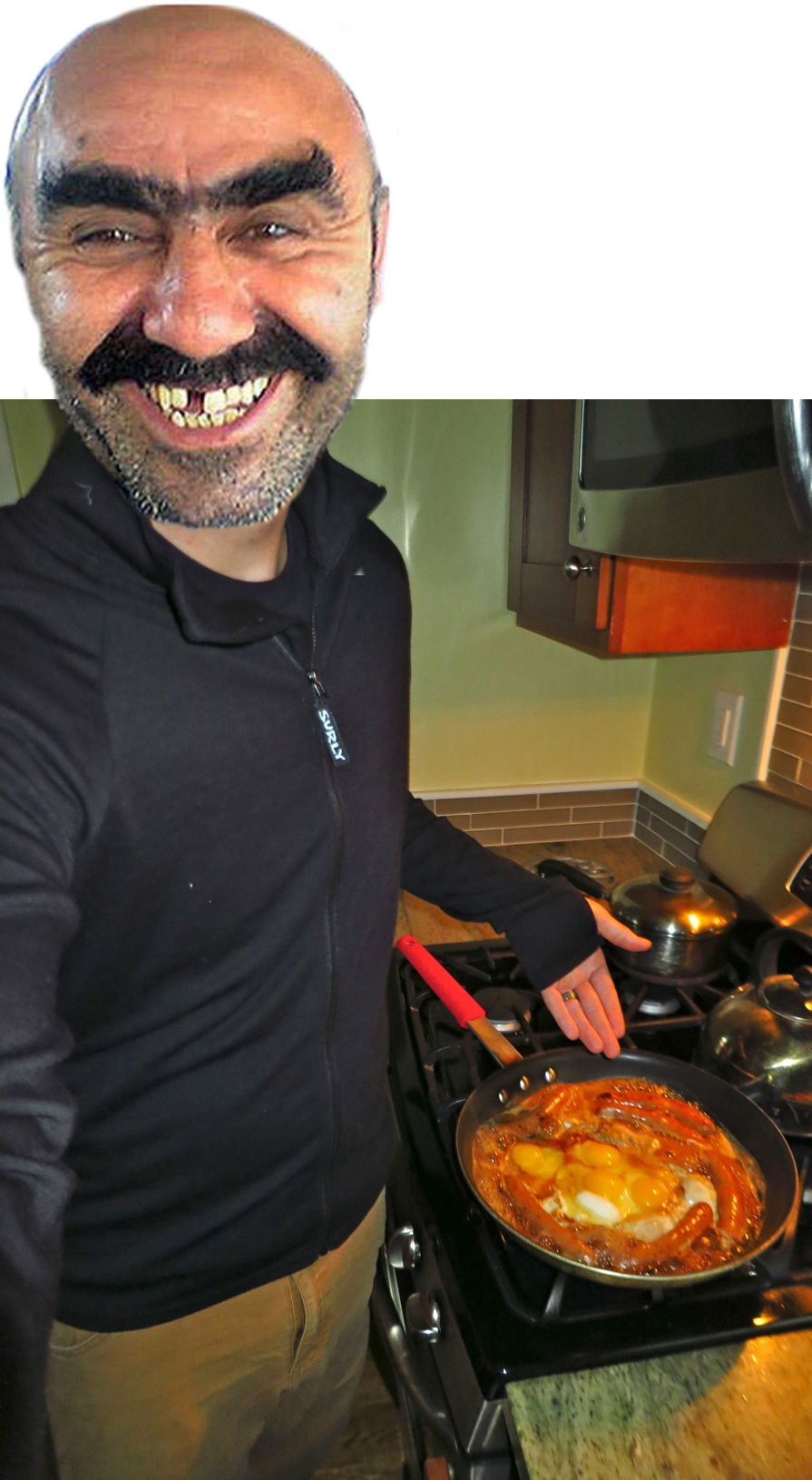 And then when riding home from the gym I looked like this; 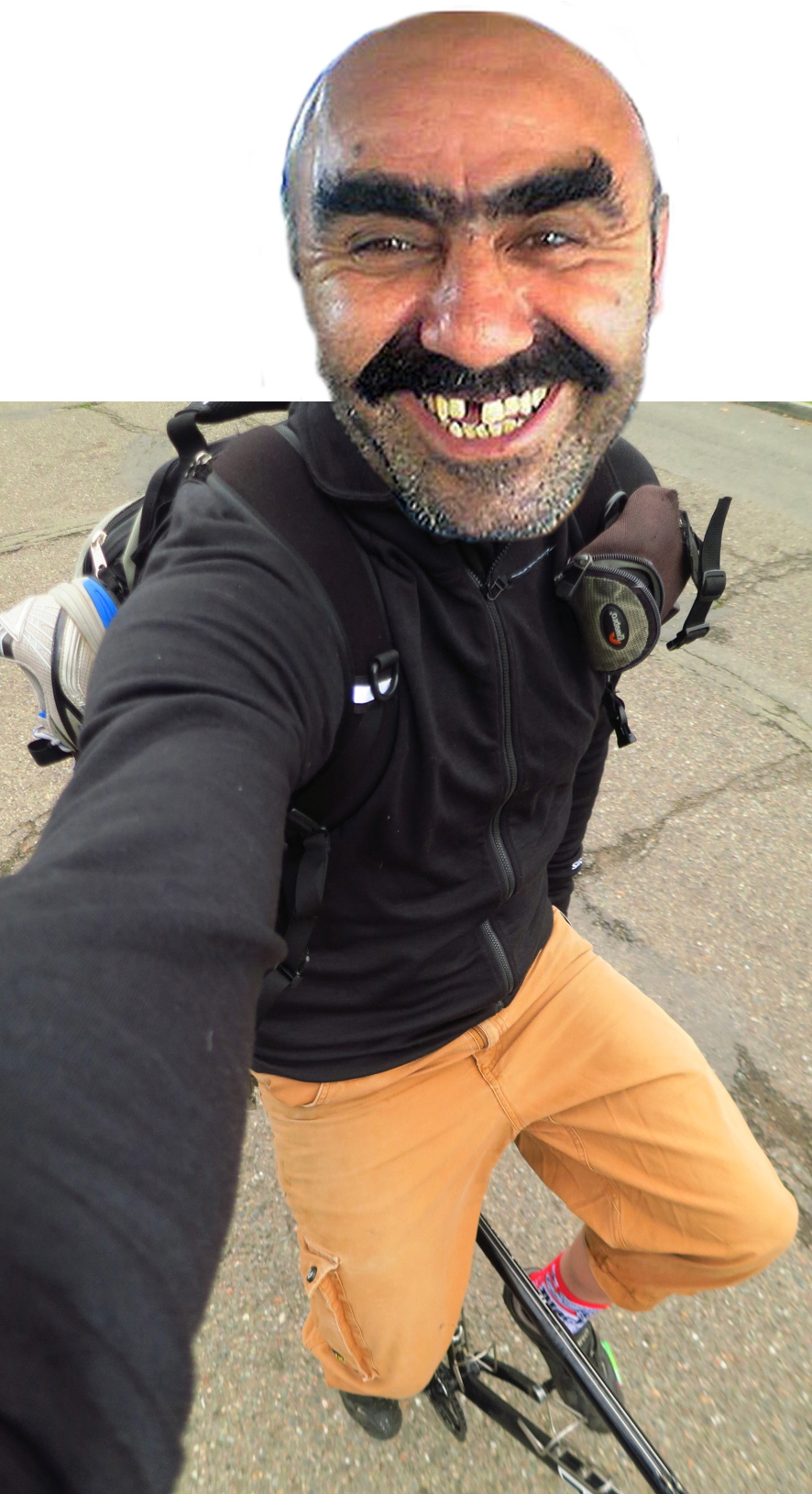 As you can plainly see, it’s suitable for many applications and can make one deliriously happy while engaged in them.

Truth be told, Surly sent me a men’s and women’s set of this jersey a couple weeks ago as prize fodder for last weekend’s Chuey shindig, and I was hard pressed to let them go, but alas, they put their trust in me, and as such, I had to the right thing and hand them off to drunken deviants; 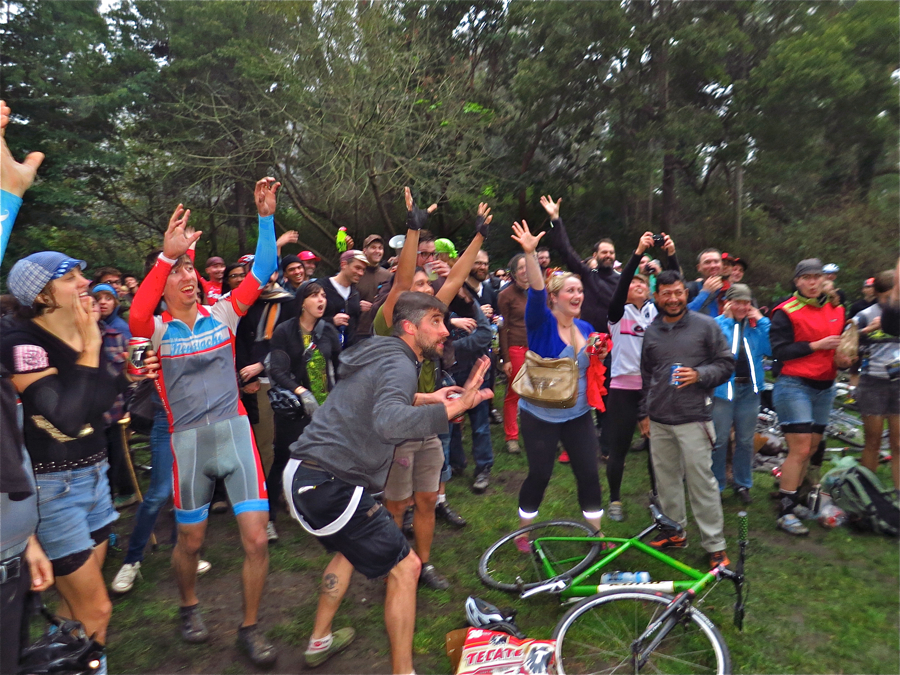 Anyway, aside from the Bandit jersey, I’ve not wrapped up in woolen goodness that I’ve liked as much as I do this particular item in some time, and I thank Surly for their generosity. I plan on doing all manner of activity while wearing this, and see if it stands up to what I can throw down.

Secondly, you might recall my recent trip to Minneapolis during which time One On One Bicycle Studio hosted an installation of Shellac posters. It was during the opening night of this show that I had ulterior motives for one Kevin Murphy of Portland Design Works. He’d asked me to bid on one of the many posters they had on the auction block. Lucky for Kevin, we won the bid and after some Pay Pal nonsense, he finally wired me the money for his poster. Unfortunately for him he neglected to include a shipping fee, but fortunately for me, in lieu of shipping monies, he made up for it by sending me some goods.

Now, for years when working in a shop, I had the luxury of having access to a solvent tank, but for the last twelve years or so, I’ve been resigned to washing my chains off in a plastic bowl full of citrus cleanser. Inspired by having spent the day with Murph as he peddled PDW’s wares to local shops, I opted to have him send me one of their Mr. Sparkle™ chain cleaners; 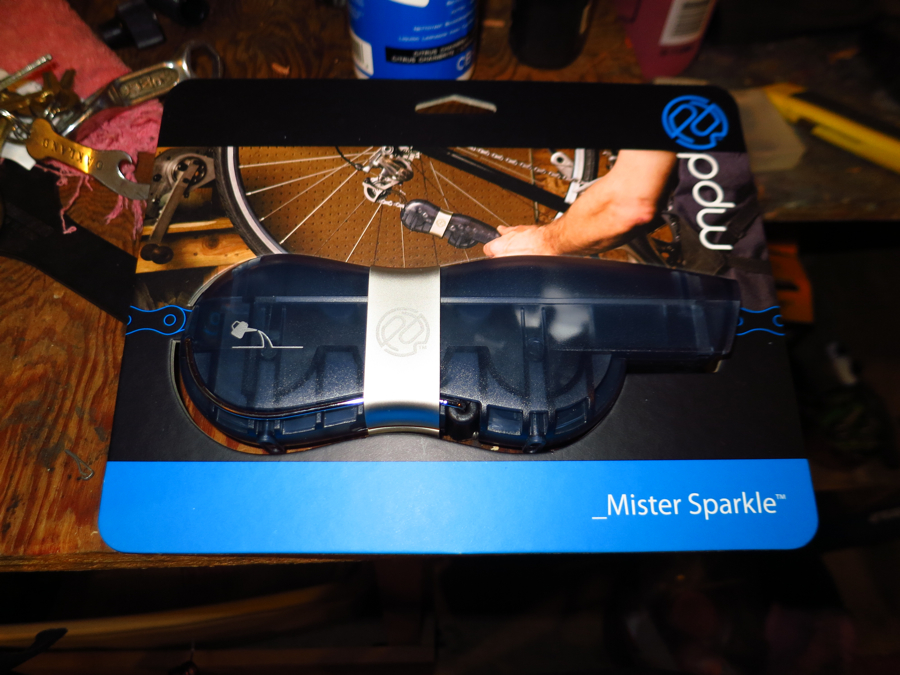 The timing was right too, because just a few days previous I spent no fewer than three hours painstakingly detailing my Ritt-ay brand ‘Saüsberg’, scrubbing every inch of the baby. All I had left to direct my OCD towards was the chain, and as soon as it arrived, that’s what Mr. Sparkle™ and I got to doing.

For shop use, I would think that it would be a bit inefficient, as I would assume any shop worth their weight would have an aforementioned solvent tank, but for the home mechanic, this thing is gold.

Alls you gotta do is snap it apart; 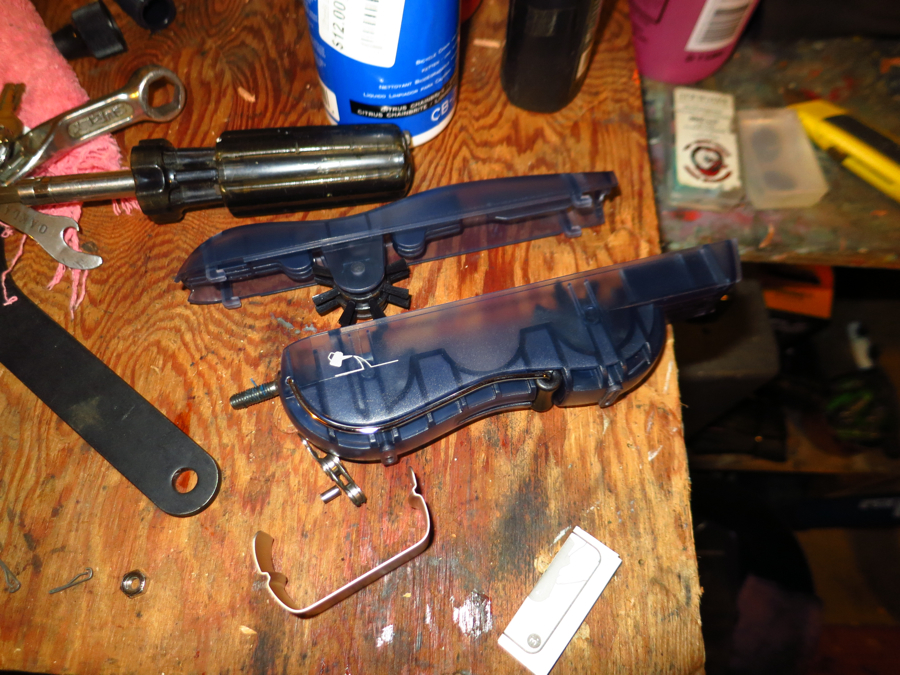 Fill it with the biodegradable solvent of your choice, pop it on the chain, and give the crank a few turns; 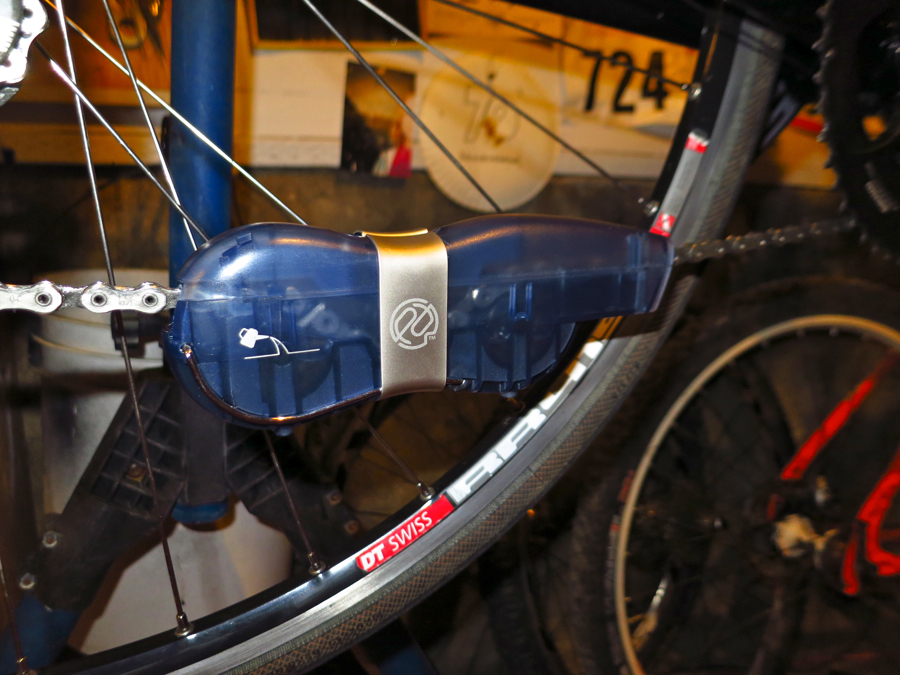 My chain wasn’t as good as new, because as usual, it’s about a thousand miles past its expiration date, but it’s clean as a whistle, and as you know, a clean whistle is a happy one.

In closing, and speaking of happy whistles, our friends at Swobo done lost their minds with a current promotion they’re having which knocks twenty five percent off of any and all of their goods for the next twelve days; 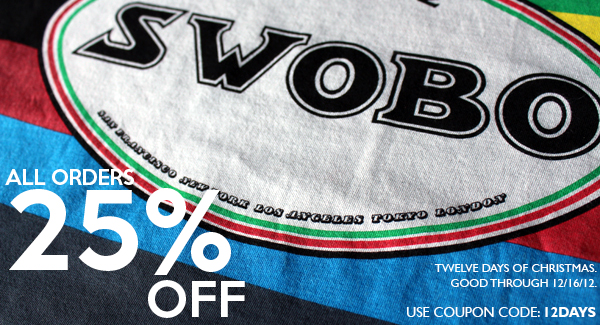 And it’s with that, that this week’s worth of shilling has come to an end.

19 Responses to “The truth is in black and white.”