It’s easier said than done sometimes and after spending the entire day in court in support of Chuey on Monday, it nearly became a mantra. 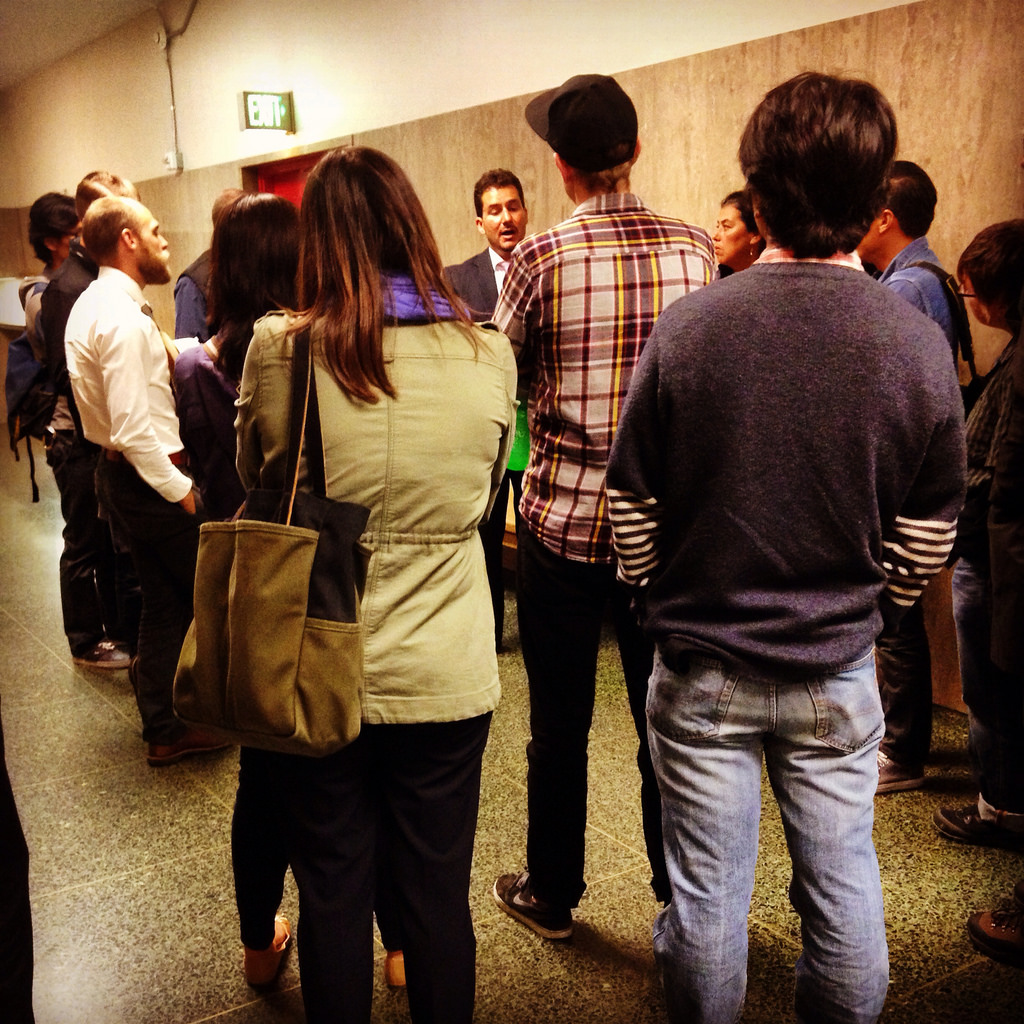 At the conclusion of the day’s events, defense attorney Lewis Romero explains to our peanut gallery of lay-people what just happened, and where we go from here.

After six hours in the gallery, I concluded that I had just watched the defense successfully spank three police officer, all of whom offered different testimony regarding what had happened on the night in question.

And to an equal degree, the prosecution was just as befuddled in their own attempts at painting Chuey as some sort of crazed lunatic who, while pinned by two 200 pound cops was wildly swinging a bike in an attempt at injuring the ‘peace’ officers.

“The injuries to the the defendant’s head were a result of us ‘guiding’ him to the ground.”

Guiding him to the ground…

Seriously, on the witness stand, the final cop actually said that.

Now please note, all that I state here is my perspective and my opinion, and as usual should probably be taken with several pounds of salt grains.

The defense was brilliant, the prosecution and the witnesses were not, but just the same, when the judgement was handed down, Chuey’s support network was left with our mouths hanging open.

While two felony charges were dropped, one was not and a laundry list of misdemeanors were added.

Did His Honor hear the same conflicting, impossible to believe and prepostersly vague testimony that I did?

Indeed he did, proving once and for all that the system is no place for any of us to find ourselves in, and if we do, Dog help us.

The upshot of this is that now we go to a full blown juried trial. Defense seemed to possibly imply that the prosecution might lose their stomach for this given the overwhelming public support Chuey has, and that final felony will be scrubbed as well, but unfortunately we continue to have to maintain this holding pattern, and in my opinion, three of SFPD’s not finest continue to ‘protect’ and ‘serve’.

Certainly, the continuation of a letter writing campaign would be of the utmost help, should any of today’s readership feel so inclined;

On behalf of Chuey, and his friends, and his family, I thank you for the continued support. 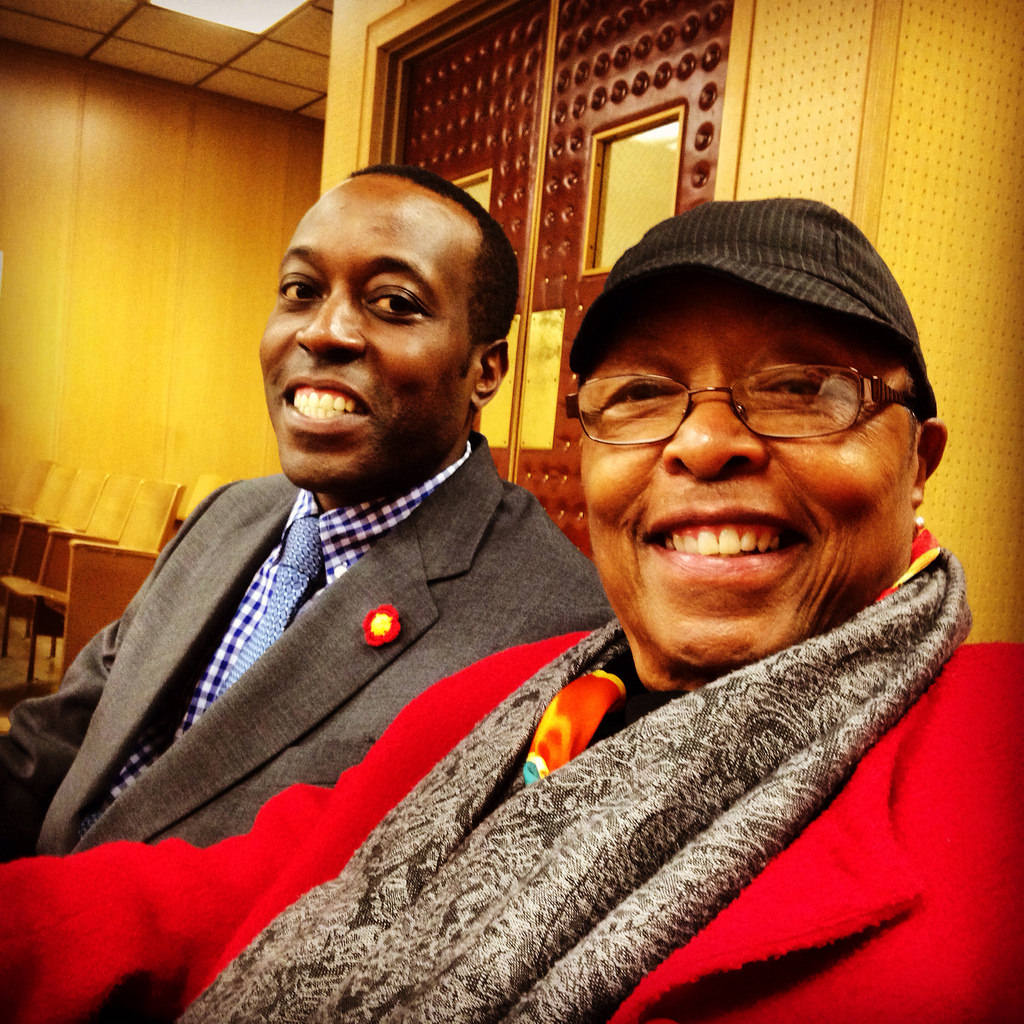 Moving on to far more pleasant topics, between all the rigamarole and nonsense of living life, I recently at long last got the last piece of the puzzle of my spanking new Blue Collar one speed cyclocrossing bikecycle; 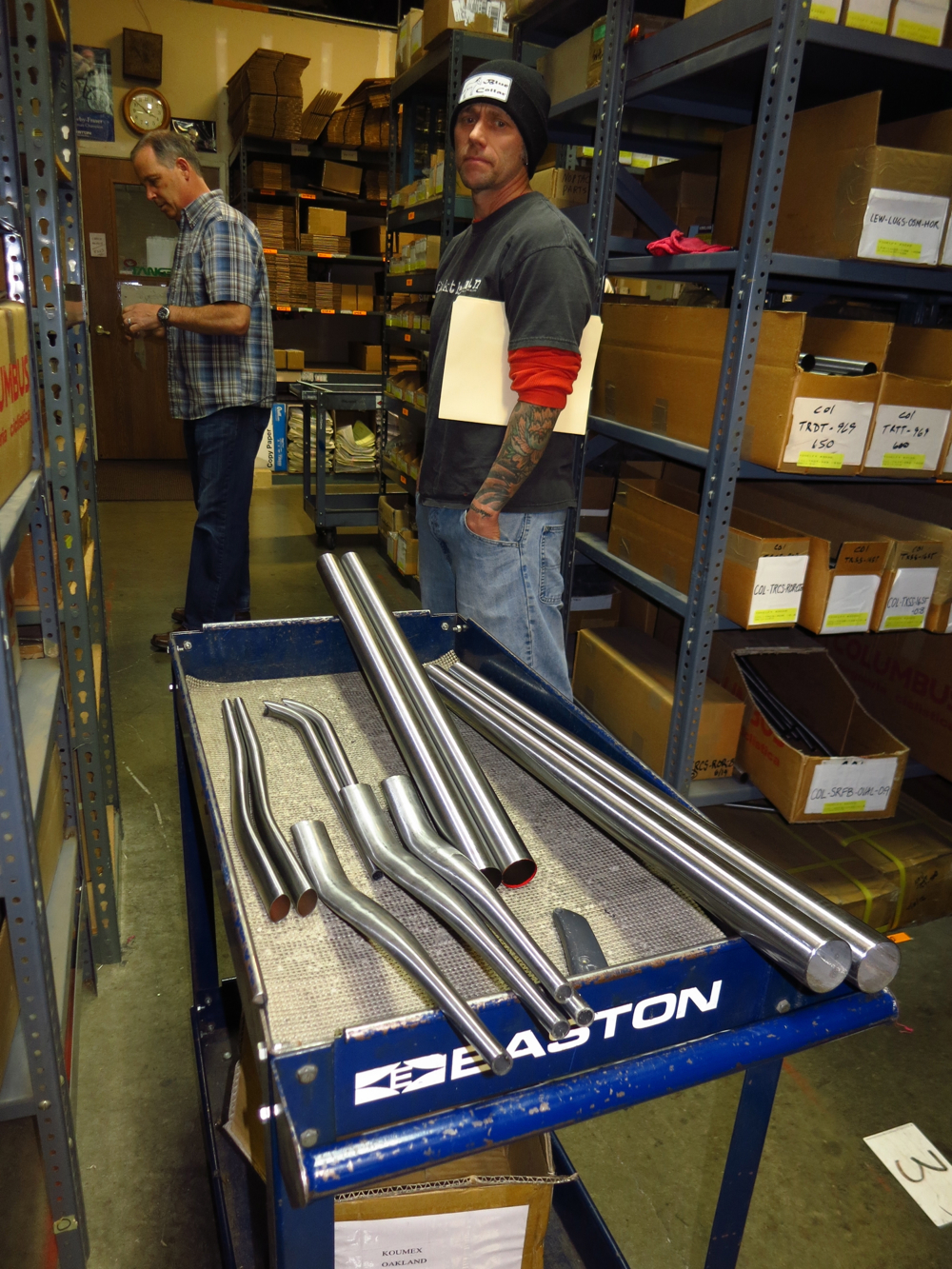 I do, and I’d be lying if I said it felt like yesterday.

I’ve literally begged, borrowed, and stolen every last part for this bike. From the Moots post (which I should mention retails for more than I could sell what’s left of my soul); 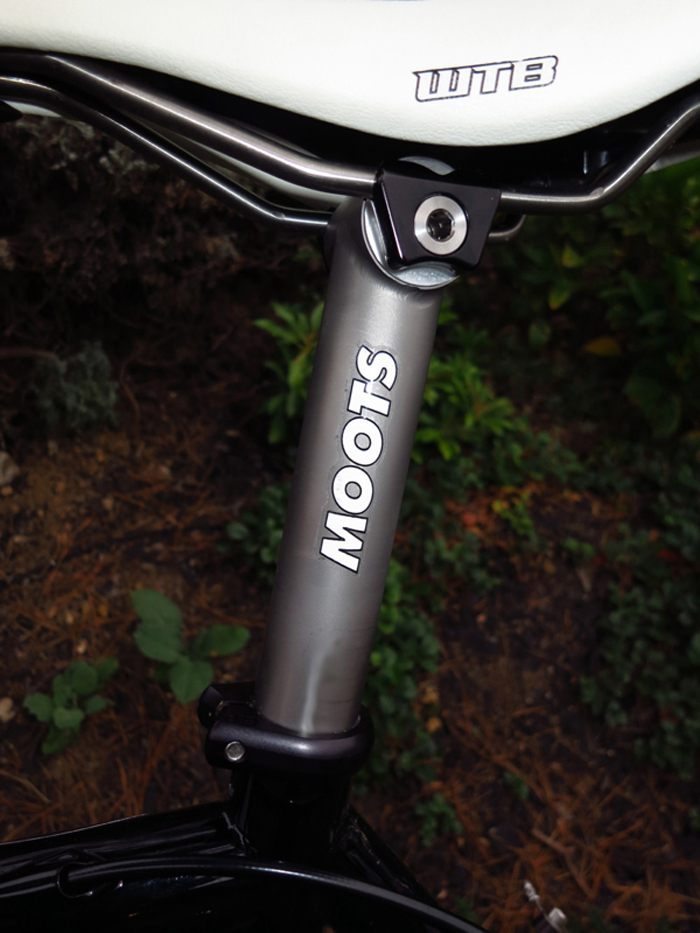 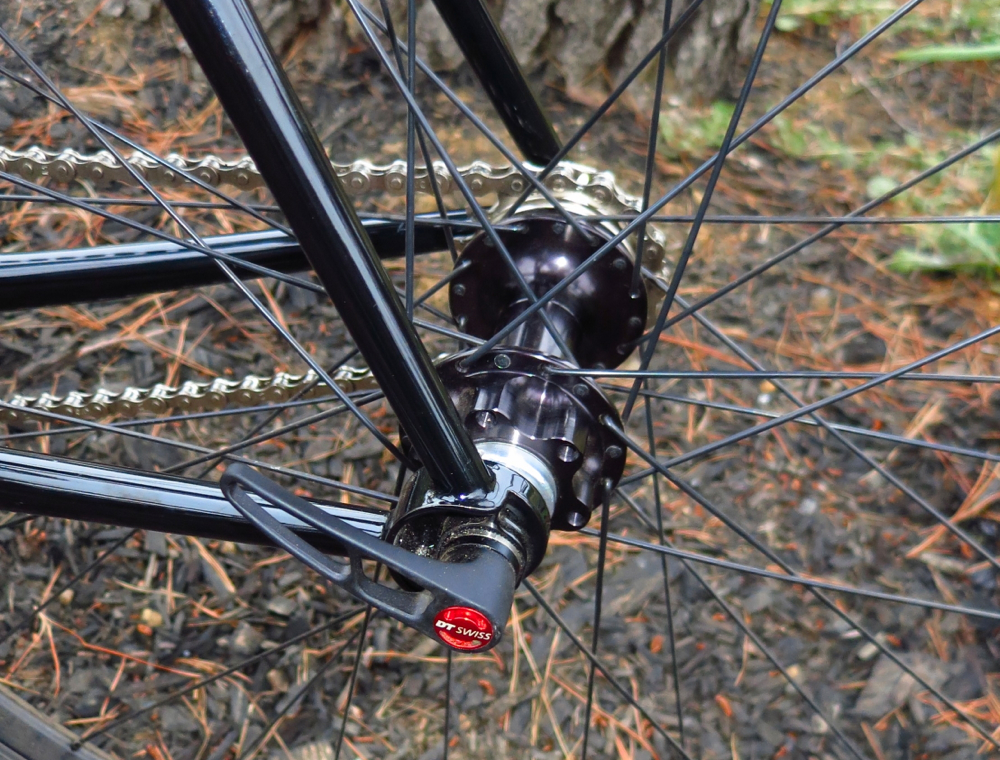 Actually going down the list with PMW bits and pieces on the frame, as well as those included in the post, a Solid BMX tapered head tube, Nova sourced tubes, a Soulcraft stem; 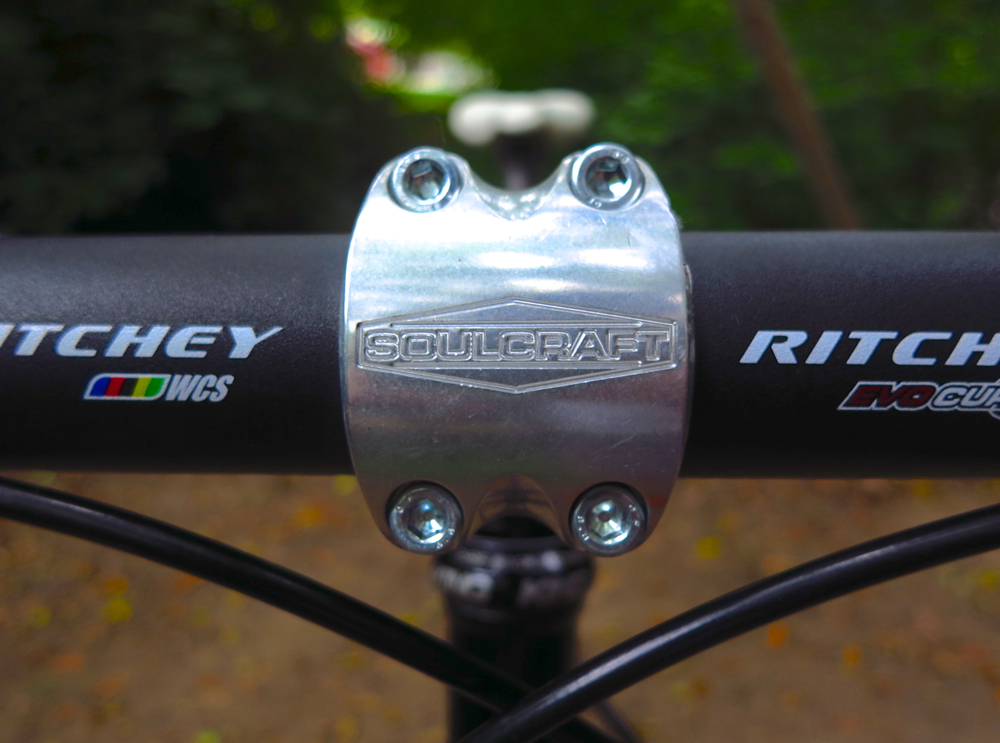 -A White Industries freewheel, a King headset, a Hive chainring, a BEER Components EBB, and rounding the build out with a WTB saddle, their ridiculous new 40c Nano tires, and Ritchey bars, this bike is about as Northern California made and/or sourced as you can get. (And I intentionally included King in this list, as they will always be Northern California to me.) 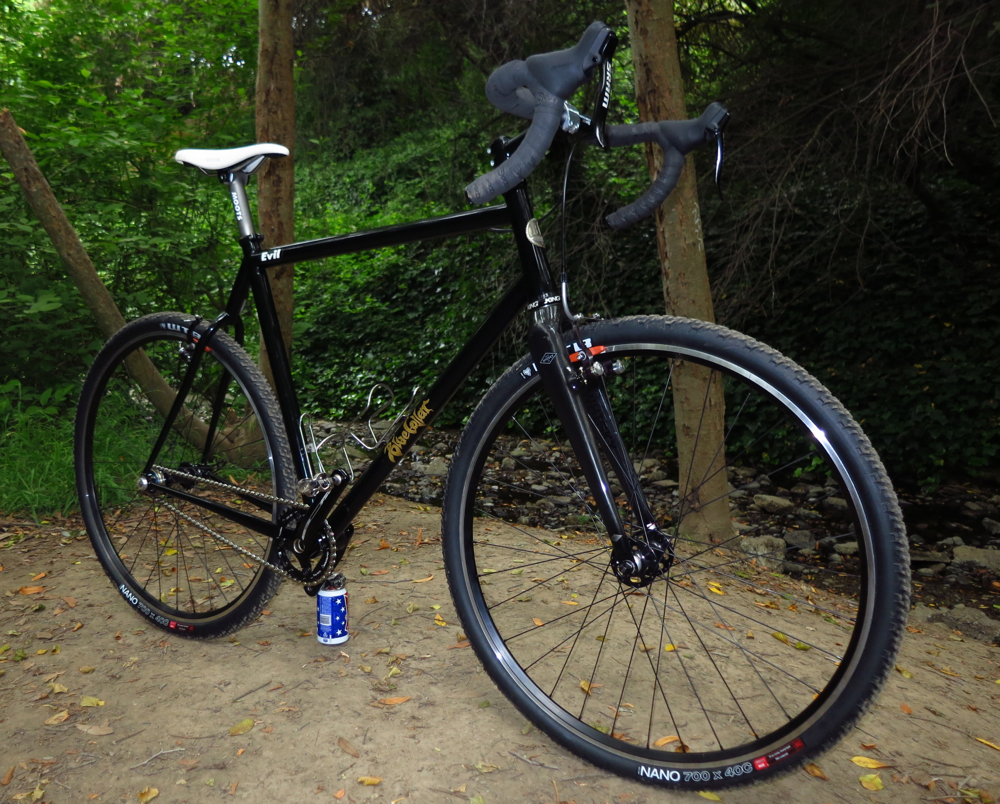 A partial inspiration for this build, (besides the obvious); 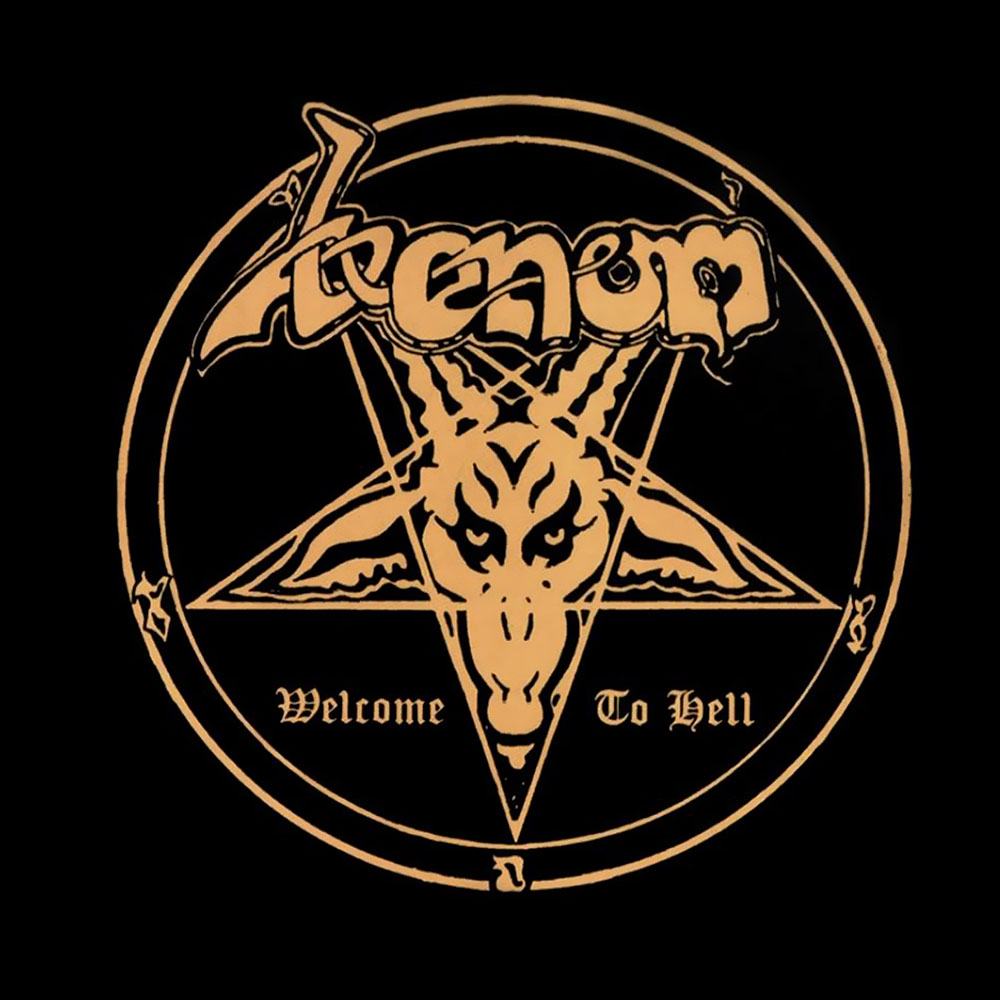 -was a bike test Ferrentino did years ago for his custom, and profoundly unique Rock Lobster one speed; 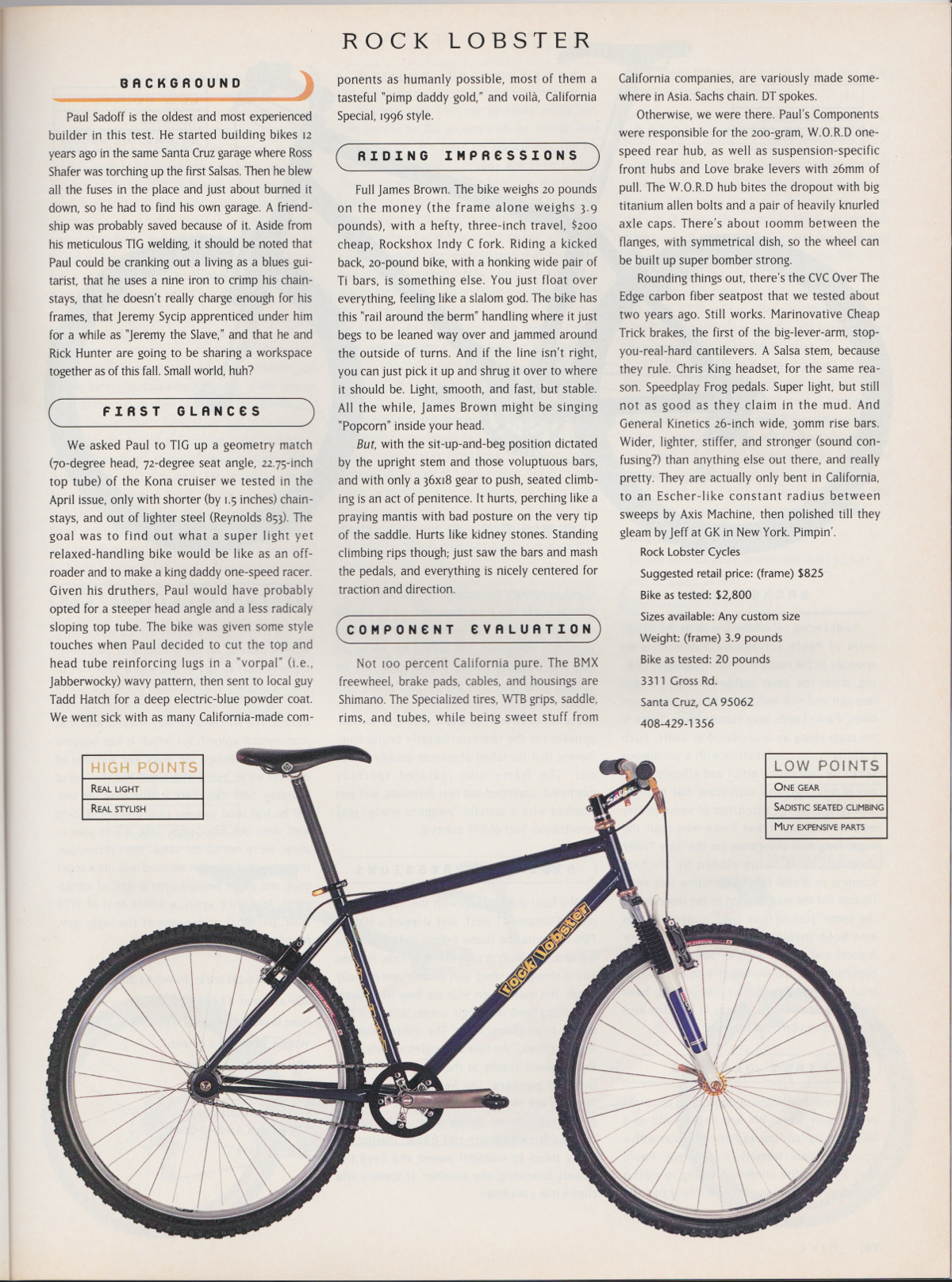 This was written sometime in the late 90s, I guess maybe? Certainly well before hand built bicycle fever had swept the nation, anyway. Even still, the concept of getting locally and/or independantly made and/or sourced parts resonated with me, and I was pretty damned excited to put this concept to the test with my own build, right down to Mike’s Salsa stem/my Soulcraft stem.

Now if I can just get out of underneath my current landslide of grown-up-esque types of responsibilities long enough to give it a proper rogering, I’d be wholly satisfied.

One of said ‘grown-up-esque types of responsibilities’ was a trip to San Francisco yesterday to have lunch with my long time compadre Julie. For those who’ve been around for a spell, you might remember her from a company called Titech. They made a lot of stuff, though among my favorite parts was their stubby bar ends; 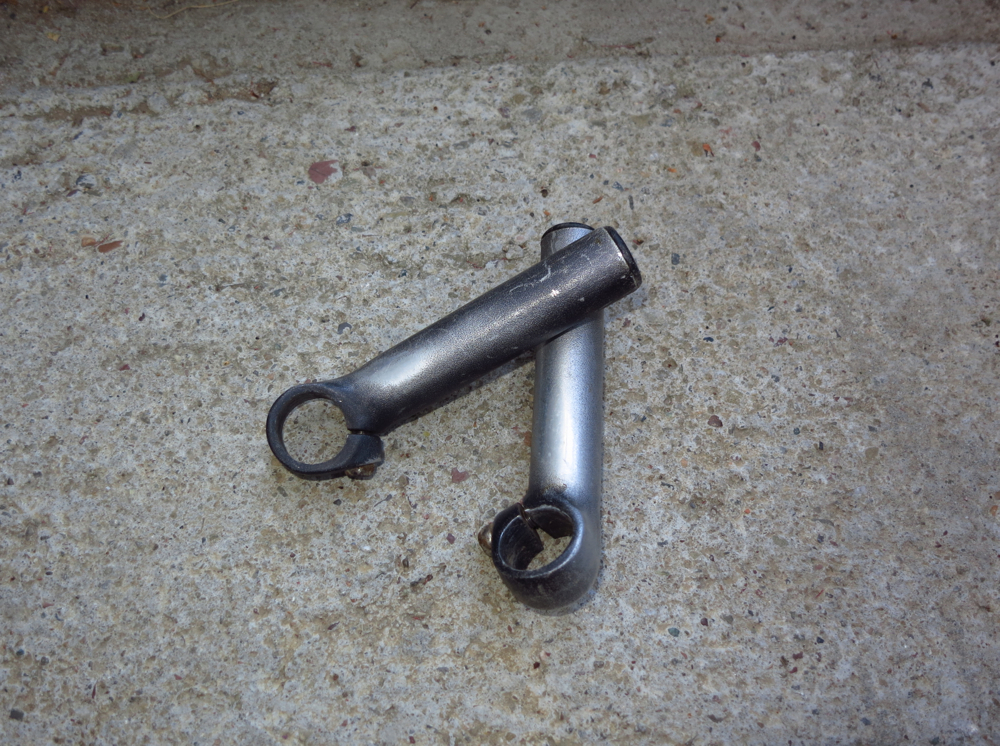 What was once textured and black has been polished to a fine sheen.

Anyhoo, she’s long since moved on to a company I’ve mentioned around these parts many times called Alite Designs.

And before you dismiss this brand as yet another hipster camping supply company, please refer to my previously stated thoughts on the matter.

Thank you for that.

So I went to the big city, and met up with her, and briefly, her compatriot Tom who has recently launched his Tyny Tools Kickstarter page;

As I am with nearly every Kickstarter effort, I was reluctant, but after Tom and I spoke a little while and he passed on an assortment of his product to try out, my cold Grinch-like heart grew in size and I opted to return the favor by making mention of it now.

I’m also a sucker for clips and straps and accessories with which to lash things onto my bag. Generally, I always have four to six toe straps dangling from my backpack to be used to retain shoes, mailing tubes, a spare wheel, or what have you, but Tom’s Tyny Tools actually excel where toe straps fall short, in that the high grade silicone stretches to accommodate nearly all manner of payload; 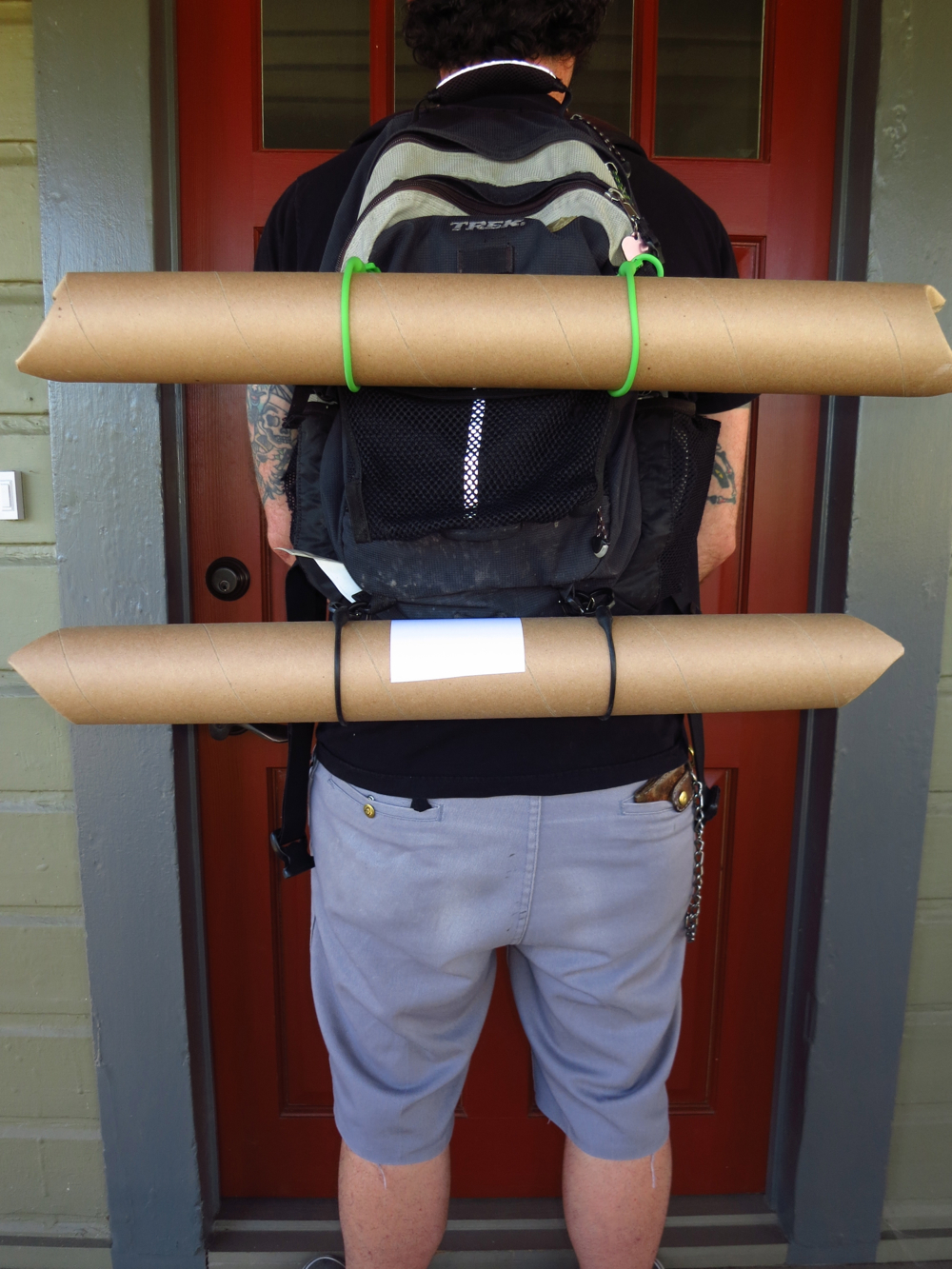 If these little guys seem like the sort of thing that you might like to see on your own bag, or assortment of camping/riding accessories, you know what to do. If they’re not, I can almost guarantee that eventually they will be and you can get an array then. Either way, you’ll most likely end up with some.

Besides meeting with Tom, Julie spiffed me with a couple of their Mantis chairs, which was awesome, because if there’s one thing I love, it’s sitting down; And yes, just after taking the photo, I cut the grass, thereby chipping away at the aforementioned grown-up-esque types of responsibilities.

It gives me a place to reflect on life, love, my dedication to friendship, van murals, my new autographed photo; 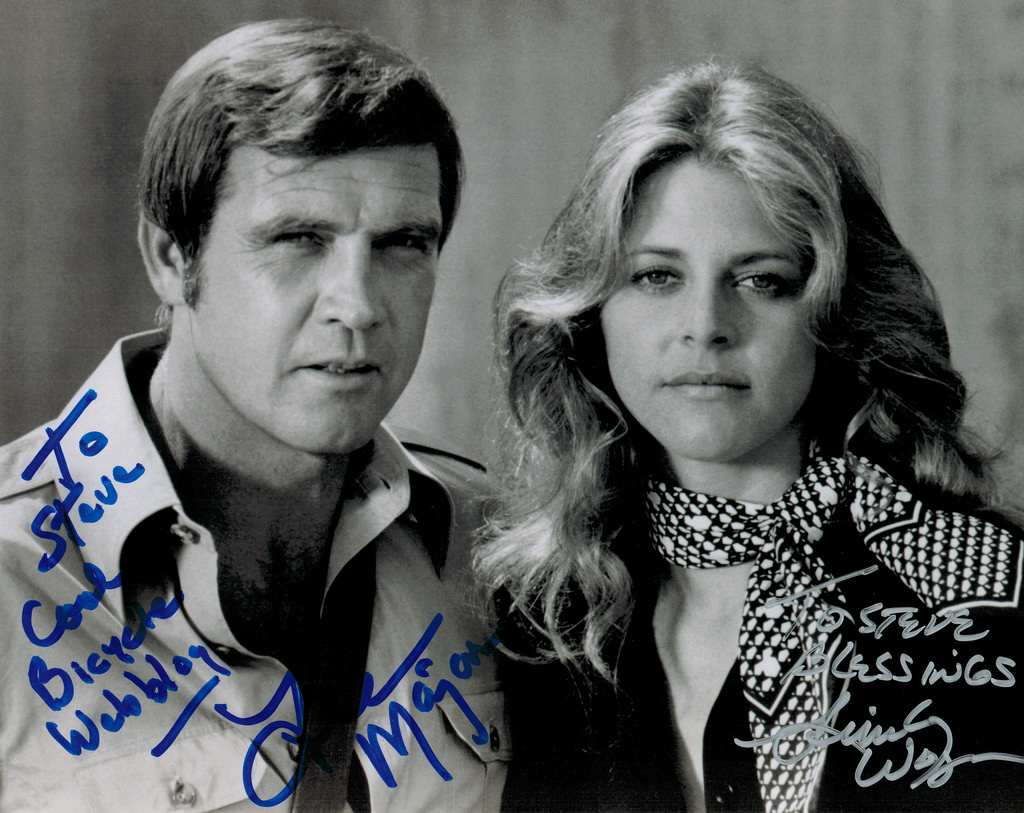 And most importantly- To breathe.

14 Responses to “Don’t forget to breathe.”