Because who, when imagining a bowl of Kitchen Sink, doesn’t somehow include Weird All in the mix?

And speaking of weird and the effort to keep things as such, everybody’s friends at All City Bikecycles are about to spread their gospel to the people with the following series of events;

“Adam is hitting the road for most of October and heading east with a van full of cross bikes as well as some Mr. Pink’s, Space Horse’s, and a JYD. 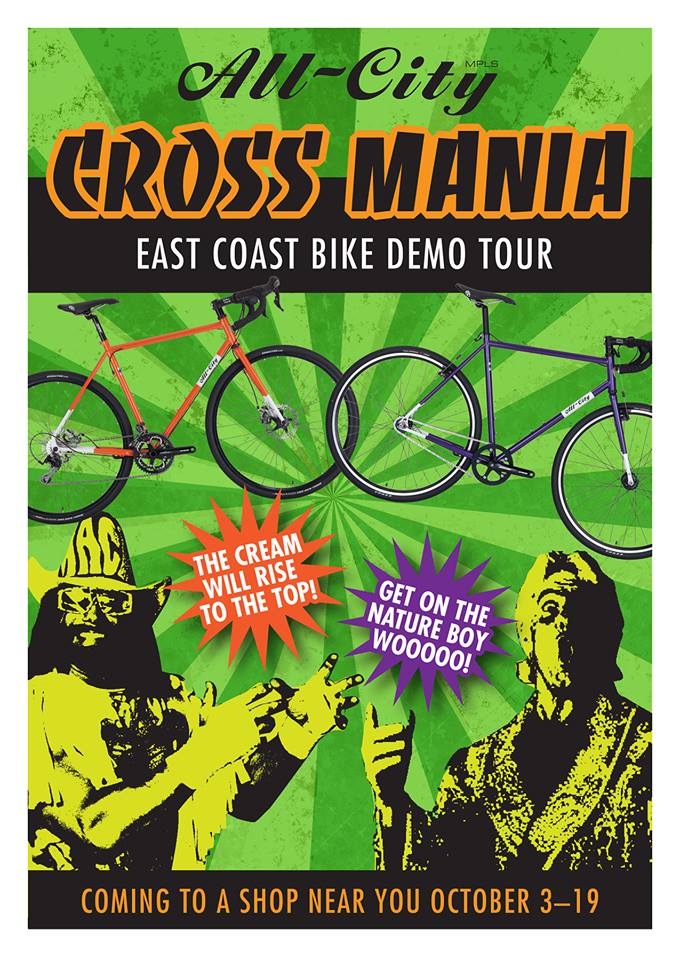 We’re hoping to have rides, parties, and general debauchery throughout the trip. Here’s the tentative tour info:

OH MY GOD THAT’S SO MANY INDEPENDENTLY OWNED AND OPERATED BIKE SHOPS MY HEART JUST EXPLODED.

This is like a rock and roll tour that has just slightly less potential for tinnitus.

So for real, if you live along any of this tour route, mark your calendars. The chance for fun and hi-jinx is nearly 100%.

The potential for fun and hi-jinx at this next event is slightly less, but chances are still pretty good. For those who have been paying attention, there is a small gallery in San Francisco’s Mission District called NWVSF. Gallery proprietor Paul (pictured here) and I collaborated last winter on a show of art made by cyclists, the content of which had nothing to do with bikes.

Well, that show was such a mediocre success, that we’ve joined up together once again for a solo show of a cyclist (me) and my work (again, which has nothing to do with bikes), that is set to open day after tomorrow; The exhibition will be made up of all brand new, or at the very least, recently re-worked pieces, all of which have nearly lead to my own demise several times over the last several months.

If you like tiny spaces filled with what assuredly are among San Francisco’s most attractive human beings, please feel free to swing by to slap a hand and crack a can.

Paul and I will be fully prepared to do both.

In other news entirely- I realize that this site is generally used as a time suck for hapless individuals whiling away their time in whatever salt mine they happen to be employed. As such, the ‘One For The Weekend’ feature is often times neglected. For my part, it’s generally a video clip that struck me to some degree or another, but is not relavant enough to actually fit in within the confines of a post.

This past weekend’s was just a bit much to leave alone there by itself, so because I would like to share what is probably one of the most squirm-worthy clips ever, I’ll trot it out again here;

How does that one meme go? Oh yeah…. It’s like this;

Naturally, it’s as insane and hilarious as she is, and when visiting friends at Sock Guy’s Interbike booth and being bestowed with an array of foot bags, one pair in particular I knew must assuredly wind up with her; 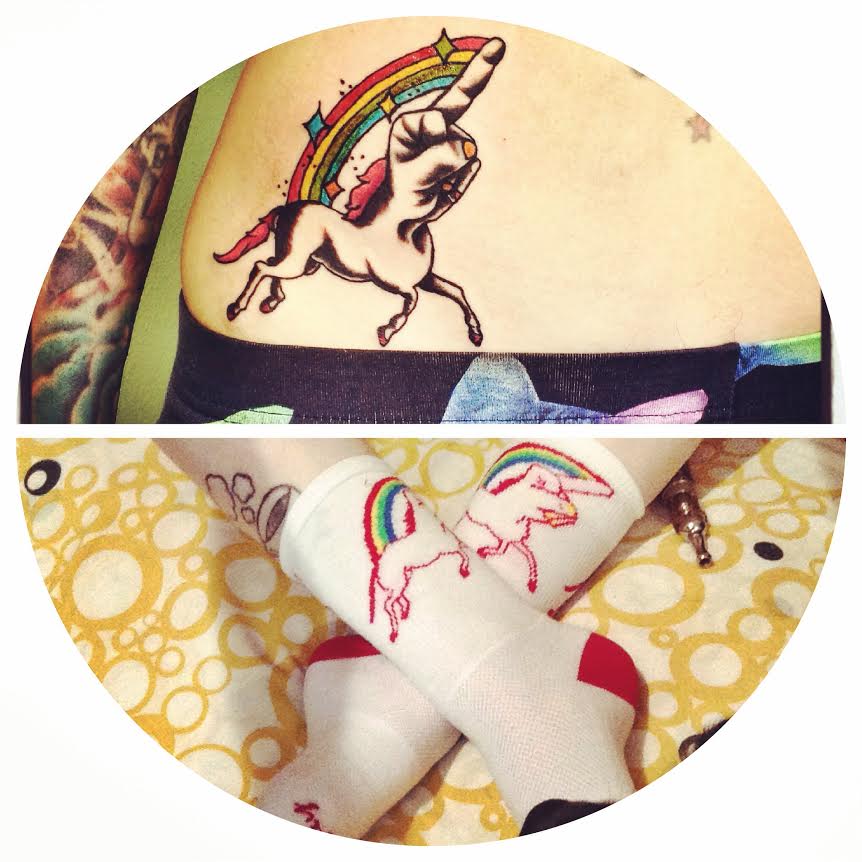 I’ve been in contact with Sock Guy to see when these might be available, and sadly, it appears as though they are just for promotional use only.

Unless perhaps they are swamped with emails and phone calls requesting that the ‘Fuck Younicorn’ be made available for the great, unwashed masses, in which case they just may change their tune.

Until that time, we can just keep fingers and toes crossed.

Finally, as we prepare to part ways, I’ll bring up a bit of randomness from Gyspy The Punk, which has been cluttering up my inbox for a few weeks;

“Long story short. My neighbor’s garden went batshit crazy and she ended up with way too many grapes. She offered a whole bunch to us, and my wife suggested that we make a batch of home made wine. (I love my wife.)

Having never done this before, I did what any hack would do, and I googled it.

I typed “how to make” into my phone, and before I could finish my search I noticed the auto-complete options…

The three things that people are most interested in making? For my part I would have guessed they would have been- (not listed in order of importance);

Turns out I was a quarter right;

Now, having come to the conclusion of the meal and forced down the final bite, the time’s come to crack open a bottle of digestive enzymes, because Dog knows, a post of hodgepodge never goes down without a fight.

6 Responses to “A pinch of hodge, and a dash of podge.”