And also tell people who aren’t currently on the injured reserve list to do their best to stay that way.

The alternative is most definately no party.

Well, it kinda is; And at this party, I’ve watched an absolute crap ton of TV.

As a matter of fact, I went so far as to watch all three Smokey And The Bandit movies.

The first one? Awesome. The Second one? Not very awesome. The third one? I didn’t even know such a thing existed. And for good reason.

Speaking of- The Snowman to my Bandit, otherwise known as Robert from Blue Collar Bikes got in touch with a heart string tugging announcement for his part in this season’s Meet Your Maker group rides.

It’s wordy, but if you love the fuzzy buddies, it’s worth the time;

My wife & I got our first “pit bull” dog, kind of by accident, in the year 2000. By the time a temporary dog sitting favor turned permanent we were already so smitten by the 4 legged princess known as Maya that we were relieved rather annoyed. Prior to that, I had known very little about the breed other than the bad publicity I had occasionally seen on the news. I was aware of tragic instances involving pit bulls, but I also couldn’t see the sense in condemning an entire breed for the bad behavior of a few, any more than I could apply the same type of condemnation to groups of humans of a particular race, religion or occupation that are often tainted by the terrible deeds of a handful in their ranks. At any rate, we paid the media little attention, as our hearts were rather swiftly stolen by the most attentive and affectionate dog either of us had ever encountered. She enriched our lives with an exceptional amount of love, entertainment, laughter & companionship until we eventually lost her to medical issues many years later. Her place in our hearts can never be replaced, but the vacancy she left on our laps and sofa has been filled by another 70lb fat-headed-lap-dog of a pit bull who is now the queen of the castle here at BLUE COLLAR home base; A few years ago, while snuggling with our pittie, drinking coffee & flipping through our NETFLIX menu on a rainy winter morning, we came across “BEYOND THE MYTH: A Film About Pit Bulls & Breed Discrimination” and of course had to watch it. I was ill prepared for the amount of emotion that the documentary evoked in me, shock & sadness overwhelmed me, mostly because I was completely oblivious to the plight of many dogs and families across the country. It was, and is, incredibly difficult for me to fathom the depths of cruelty, abuse, exploitation and discrimination many of these poor dogs are subjected to, I simply can’t understand it. I was also filled with hope, having also learned that there are groups of compassionate people out there determined to do something about it. The movie also introduced me to Dawn Capp, founder of CHAKO PIT BULL RESCUE AND ADVOCACY GROUP who was an integral part of the film’s subject matter and devout supporter of it’s intended message-every dog deserves a chance. With a little research I found that CHAKO was located right here in Sacramento, subscribed to CHAKO’s Facebook page and began following the rescue group, all the while wishing my life was a little less busy and our living situation was more complimentary to helping out by becoming a volunteer or foster somehow. Those obstacles were pretty difficult to overcome but I continued to follow CHAKO intently, many times brought to tears of both sadness and joy by the stories of the dogs they were rescuing on a daily basis.

When I was given the opportunity to host a MEET YOUR MAKER ride here in Sacramento, something clicked and I instantly thought of somehow utilizing the opportunity to not only host a really fun event but also raise some funds for a cause that was extremely important to me. I came up with the idea to raffle off a BLUE COLLAR frame and that eventually turned into a complete bike, then VENTANA donated a frame to raffle (they had grown to know and love both of our pit bulls over the years). Many other generous donations of product and assistance came in from the bike industry, friends & family. By the time the dust from the event had settled we had a great ride and the raffle raised around $3000 for CHAKO to help some deserving dogs get medical attention, training and eventually into loving homes. I have never been as humbled or grateful in my life as I was that day, the amount of support we received was overwhelming and I will never forget it.

So here we are now, one year later, scrambling with event prep, sending emails, making phone calls, building up raffle bikes, calling in favors, & spending every moment possible to try and put on another great event and hopefully raise some money for a cause that is the dearest thing to our hearts. When I am almost out of steam and wondering what the hell I’m doing, I get all the affirmation of purpose I need by looking into the eyes of my precious pittie and thinking of all the others like her that deserve a chance to have a home and family that loves them. It’s the only motivation I need. I won’t even mind the 2 months of catching up on chores postponed and paying back favors. If we can give even one dog a chance, in my eyes it will be totally worth it. In an effort to expand our reach and allow for those who are not able to attend the event to participate in the raffle, we have set up a PayPal account for online ticket purchase. Tickets are $5 each and 100% of the proceeds are going directly to CHAKO PIT BULL RESCUE AND ADVOCACY GROUP & Sac County Dogs, all event set up and execution costs are being covered by BLUE COLLAR, our sponsors, friends and families.

We will fill out your tickets and hold on to your stubs until the day of the event. If you win, we will contact you and arrange for your prize to be delivered or shipped to you, at our expense. So far this year, we have a complete VENTANA EL GORDO fat bike; -built to the hilt with an XTR drivetrain & brake set (thank you SHIMANO!), a complete BLUE COLLAR 26 ”+” single speed pump track/get rad bike adorned with some of PAUL COMPONENTS finest goods, a beach cruiser, OAKLEY sun glasses, gift certificates from VOLER, AHTBM soft goods and much more to raffle off. We’ll be updating the raffle prize list and event info on a regular basis on the event Facebook page.

Thanks to you and thanks to the readership.

*Note* For those with a short attention span, the abbreviated version is that Robert loves dogs, but especially Pitties, and he does everything he can do to help make the world a better place for them. This includes assembling a raffle attached to the Meet Your Maker ride he’s hosting next month, the proceeds from which will go to a local Pit rescue.

If you’d like to spend a couple bucks to help some pups, while at the same time getting the chance to win a complete Ventana, and/or Blue Collar, as well as much, much more wizbanging doodaddery, read over the final paragraph of his email, and toss a couple bucks at him.

Or you can just show up to the ride and do it in person. Anyway you slice it, it’s gonna kick ass.

And as a side thought- If the All Hail The Black Market web project seems to occasionally be a bit North Californiacentric, the reason is that I live here, and people who also live here have recently been a wee bit better about keeping in touch with goings on similar to that which I just mentioned.

I know that other people around not only the country, but even the world who read this here site, are getting into and on with their own types of two-wheeled shenanigans, and until I’m back on my feet (which I was just on Monday told by my physical therapist is going to be a cringeworthy ‘nother two months) I’m even more desperate than usual for sporadic emailings on the topic.

So do what you do, take two decent photos of it, and send me a paragraph detailing the thing. It’s super easy.

In news of product reviews, I would like to bring up the very fetching KindHuman leather glove; Along with the gloves, they sent me a nice note; As I mentioned to Samantha (I imagine her being in her mid 30s, wearing a power suit, and flying around in the KindHuman helicopter), back a handful of weeks ago when she initially sent them on, for at least a few months, aside from keeping the gun out of my mouth, I wasn’t planning on using my hands for anything that would warrant gloves. I considered writing a review of how they felt when being worn crutching around my house, but the sheer crappiness of that reality left me with little inspiration to try to follow through with such a thing.

Secondly, I didn’t think that it would give the gloves themselves the justice they deserved either.

Suffice (it) to say, upon initial inspection, these new guys seems to be of the same caliber as my old, and beloved white KindHuman Klassic leather gloves; I have my daily drivers, which are tattered and worn, so on the occasion I would go out with my Sunday’s finest (white hairnet, and potentially a clean pair of shorts), I quite enjoyed breaking out some white leather.

If you might by chance be in the market for a low profile and classically styled leather cycling/race car driving/murdering glove, might I direct you towards those made by KindHuman.

They even work well for stereotypical breakdance gang membering; 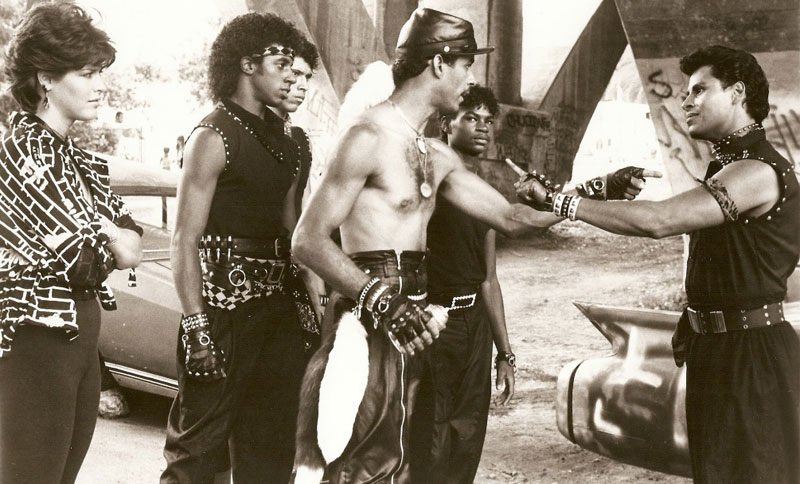 Though if bedazzled gloves be what you’re needing, send them on over to me. It just so happens that I have a lot of time on my hands; I may be an invalid, but by god, I’m still good for something.

7 Responses to “I wanna give a shout out to my fellow invalids.”