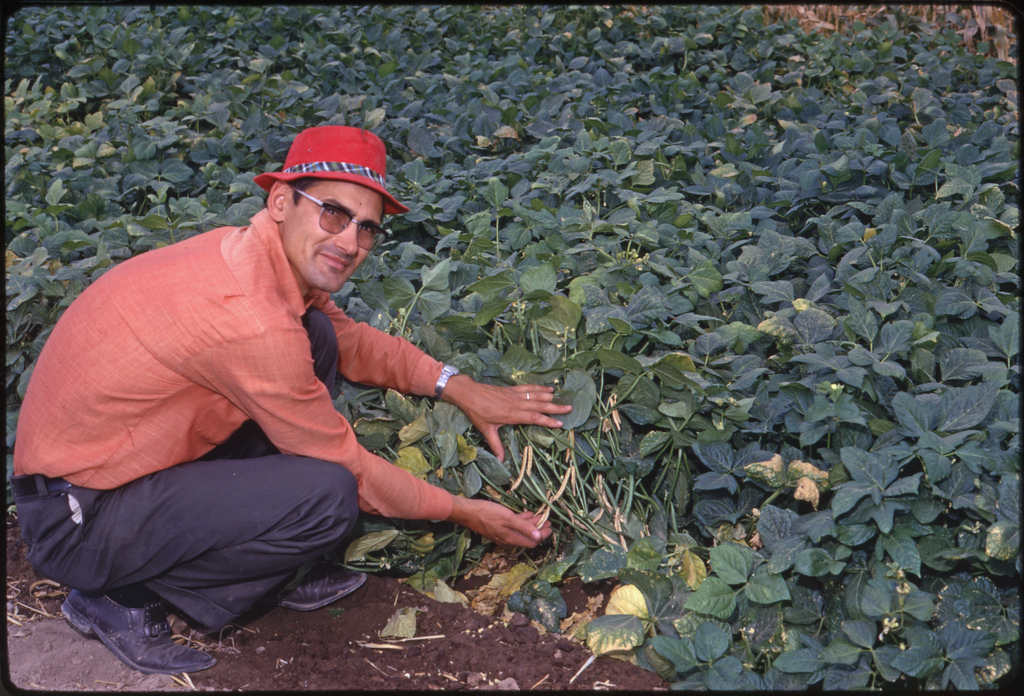 (When I Googled ‘doing stuff‘, this was the first image to come up so I suspect it’s the most appropriate visual accompaniment for today’s effort.)

“Why, what stuff have you been doing?” you maybe just asked rhetorically, but probably didn’t.

Well, mostly I’ve been busy biting off more than I can chew.

Firstly I agreed to build up my buddy’s Caletti, pictured here in a pre-completion state; 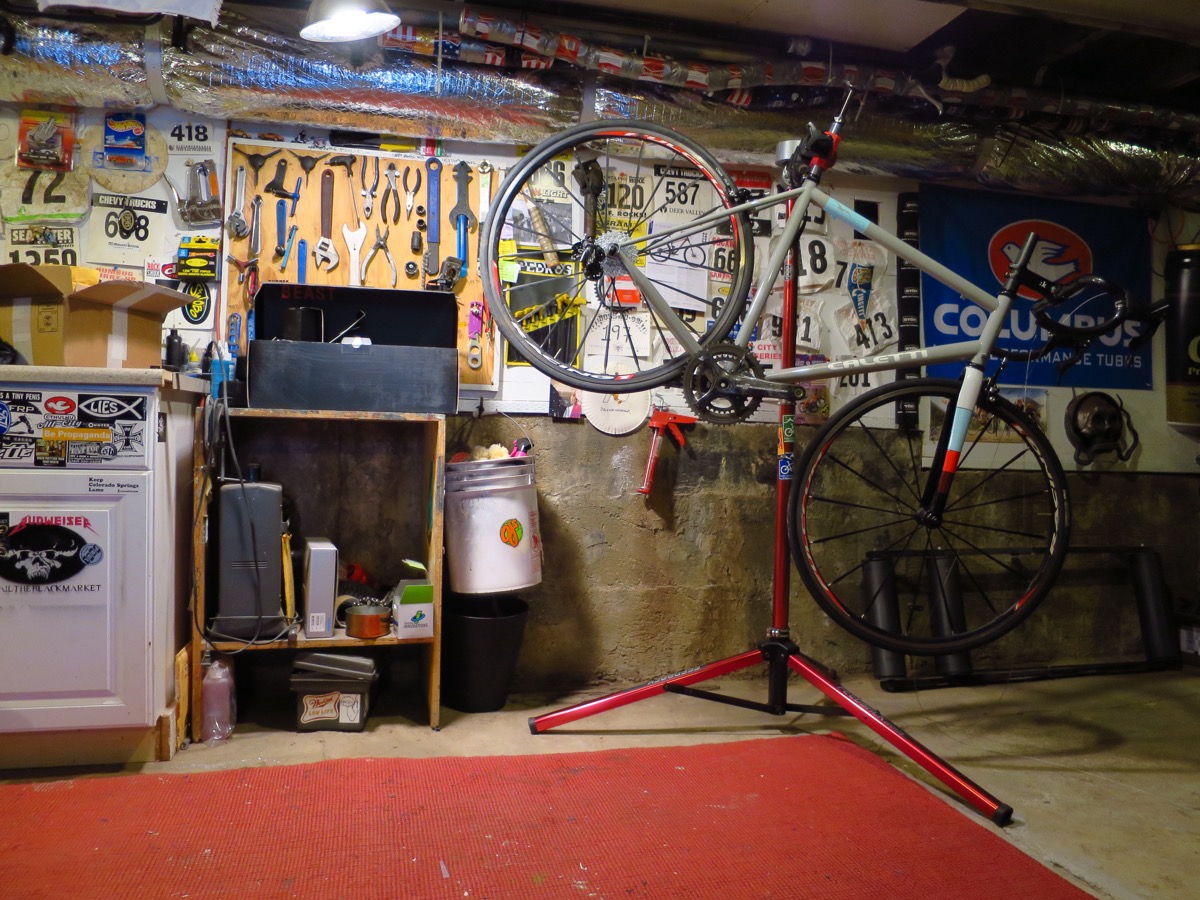 Of course that involved borrowing a torque wrench, finding out my chain tool wasn’t the right kind of chain tool, having everything measured, and ready to go only to have my buddy request a change in hood height, which required re-stringing the shifter cables.

I ended up eventually knocking it out, but will refrain from posting a photo of the completed bike in order to avoid the dork brigade question my ability to tape bars, or say that they way they crimp cables is better than any other way, or that I used the wrong kind of/too many/too few headset spacers or whatever.

Just rest assured that the person who owns the bike (see: the only person who will ever ride it) is exceedingly happy with all of it, and ultimately the only one whose opinion matters.

I also mentioned that I’d taken on a commission piece- a thing I never do, which last I mentioned it, looked like this; 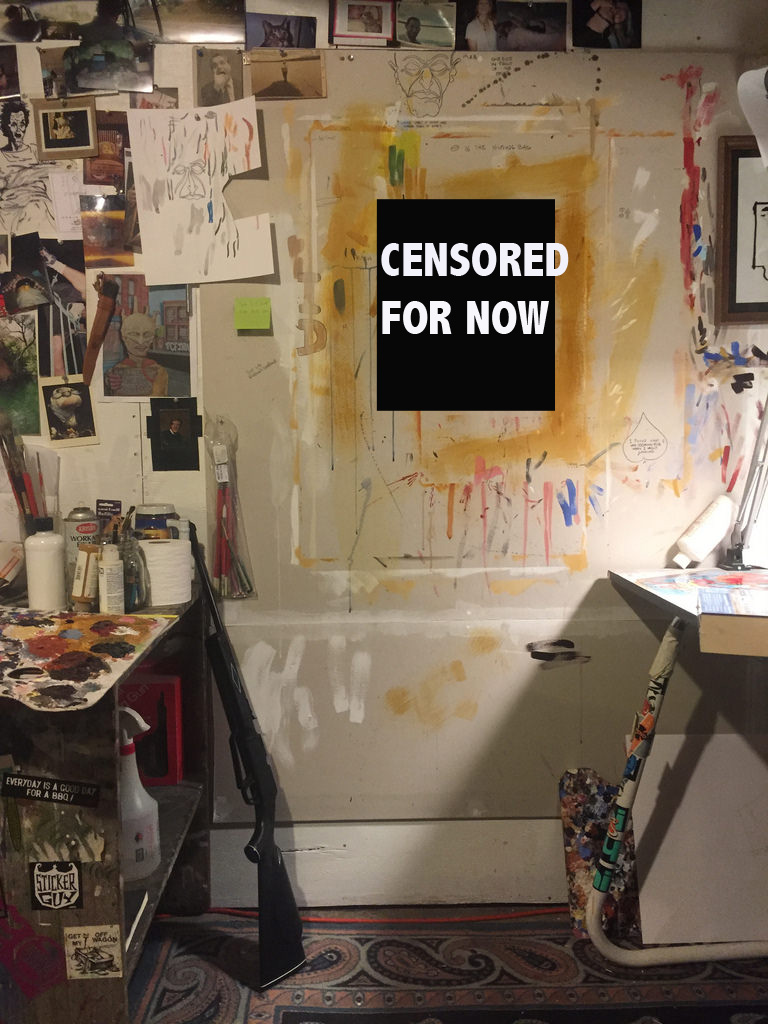 -Without the clever Photoshopping, and for the sake of full disclosure, it most likely looked like this; 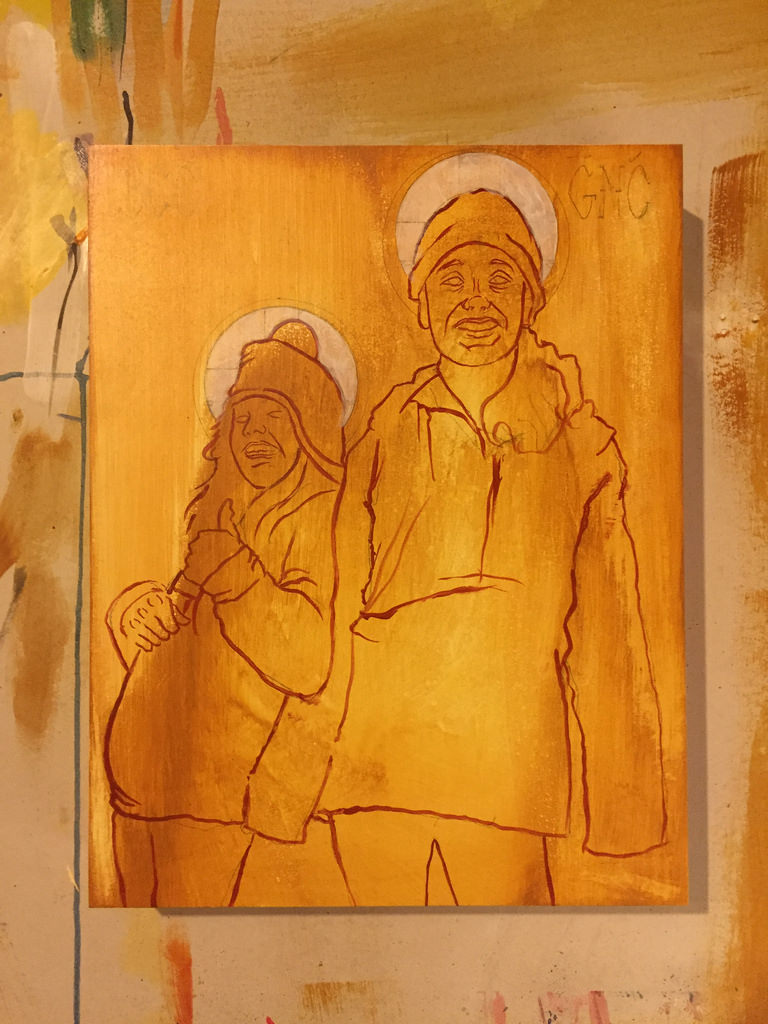 But now after fifteen to twenty hours looks a bit more like this; 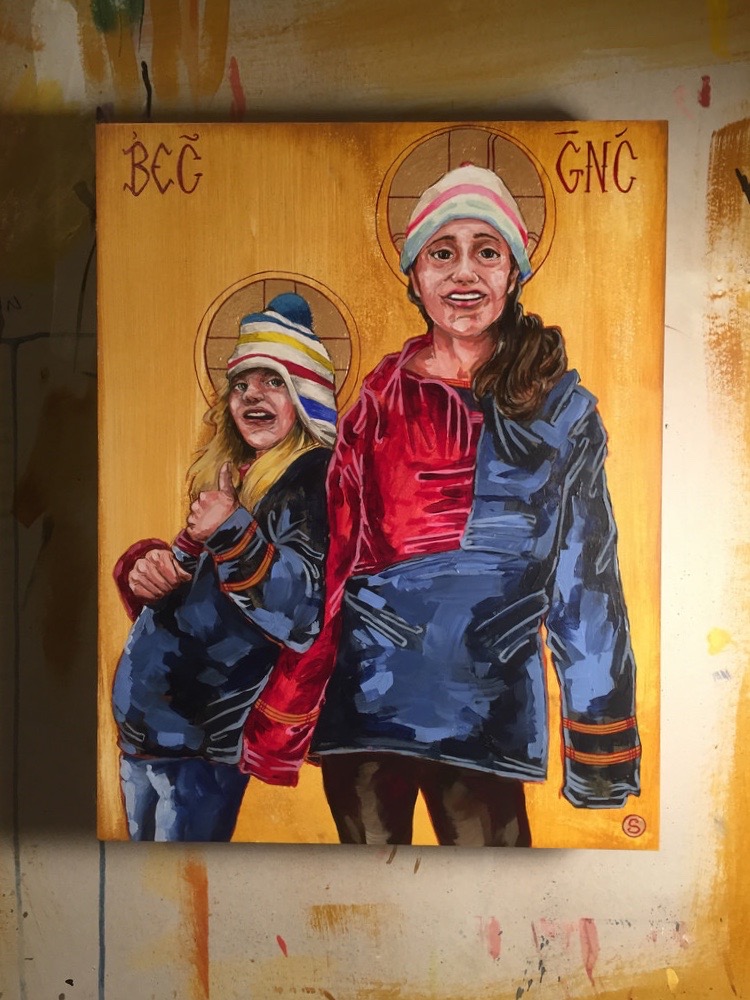 In that time, the rains came in with a fury, and my studio flooded, leaving me scrambling to keep water from running into places where it had no business.

Meanwhile, I was risking electrocution as I finally installed lights in both my studio and shop, negating the need for the fifteen miles of extension cord I had keeping everything afloat previously; 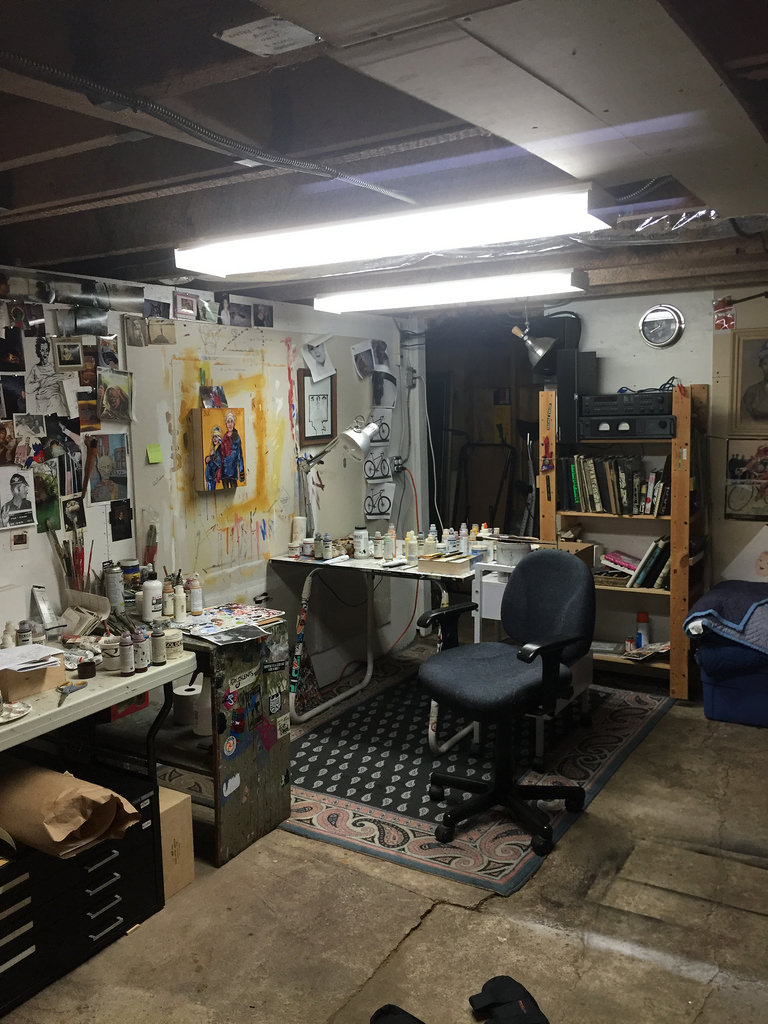 Not only that, but I wired in a few additional outlets so I can do important stuff like hang my beloved King Cobra sign, about which I Instagrammed a bit of prose; 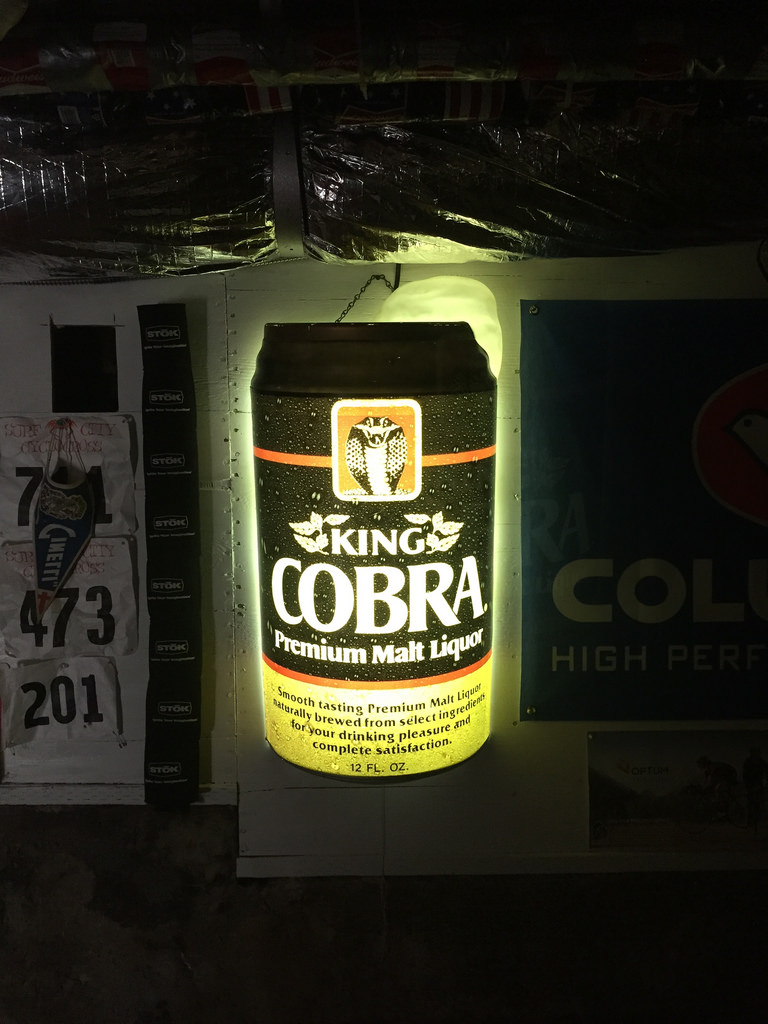 “In 1991 I worked at a giant art supply store in downtown Oakland which was basically run by a bunch of derelicts. I’m still using supplies that I appropriated during my time there, but that’s all I’ll say about that. Anyway, eventually a new manager was hired who was this flimsy, cross-eyed Eraserhead looking motherfucker named Dennis. He sucked, and had terrible taste in music (which he forced upon us). We definitely didn’t get along and I knew my time there was short, so one night I took all of his mix tapes home and randomly recorded various expletives over the top of the music. So on any given day while the store was being treated to a Muzak version of ‘The Age Of Aquarius’ or whatever, in would come my voice with a loud ‘fuck’, or ‘cunt’ and so forth. I assume he either recorded all of his crappy music again on the same tapes, but more than likely he just threw them in the trash. Anyway, on the day I was ultimately ‘laid off’ I went by the corner liquor store and offered the proprietor my last twenty bucks for his King Cobra sign I’d long had my eye on. He knocked down his whole Bollywood video display in the process, but now that I finally have an outlet in which to plug it, I’m sure he’d agree it was worth the hassle.”

On top of spending a day risking (further) electrocution, I had two projects for next month’s NAHBS show. One being paint-scheming up a bike frame that nearly killed me, (and will most likely have a spy shot posted here and there between now and then), and one being the preliminary stages of the aforementioned revisitation of the SOPWAMPTOS Awards;

As a matter of fact, a meeting of the minds just occurred in Petaluma on Wednesday night yielding a bumper crop of categories.

Naturally (because this is how SOPWAMPTOS rolls), the note taker didn’t close the saddle bag on his motorcycle, resulting in the note pad leaping to its near-death in the middle of the freeway; 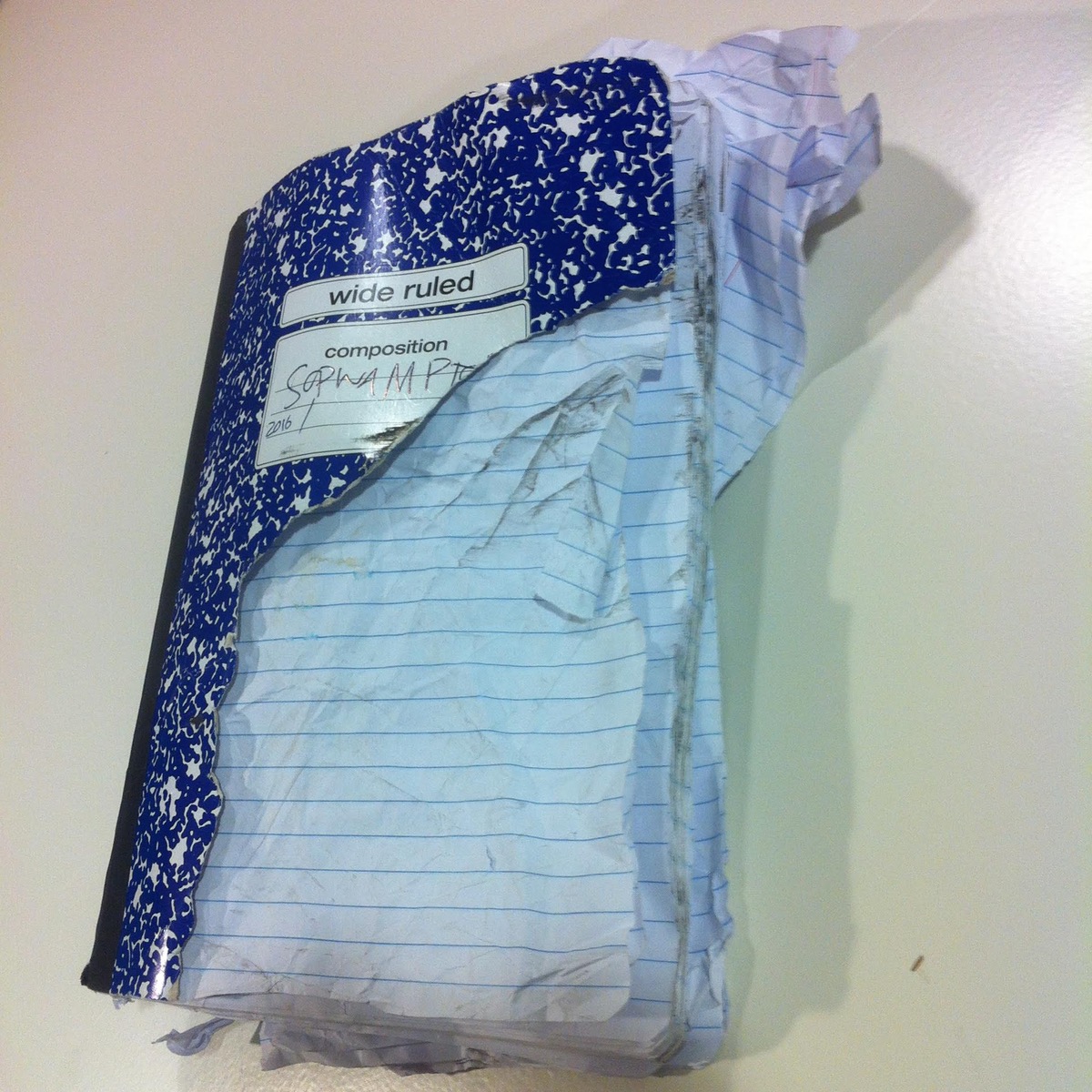 Better the note pad than the note taker.

As if all of that weren’t enough, I then get wind that there is a real live art show, and block party at NWVSF in celebration of Paisley Skateboards; 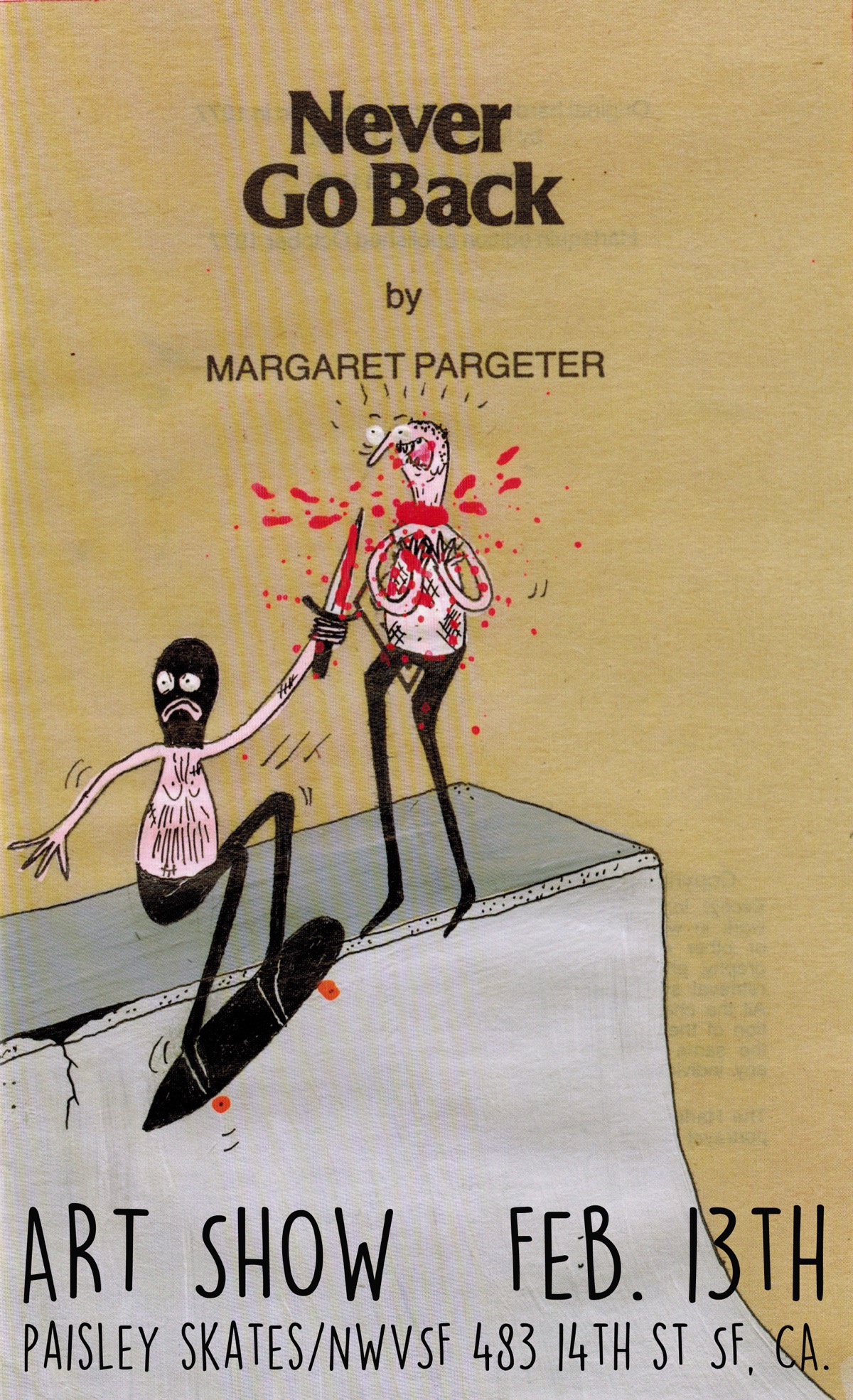 The art on the flyer is by the wildly prolific Jay Howell who not only makes art faster than I change my mind about making art, but is also responsible for both Sanjay and Craig, and Bob’s Burgers.

No telling if the artwork I snagged will actually be what he submits for the show. I just yoinked it from his book, because I’m a hack like that.

Of the thirty artists who will be showing work, one piece that will be on display that’s obviously near and dear to my heart is the graphic Bruce Gossett inked up for the NWVSF/AHTBM skateboard; Anyhow, Box Dog Bikes is right across the street from NWVSF, and are gonna get in on the action as well.

Bikes, boards, and beers. The trifecta of awesome.

So while I was breaking my brain trying to figure out what I was going to make for that show, Marty and Emily from Squid Bikes showed up to my house, and we spent the day riding the bikecycles; 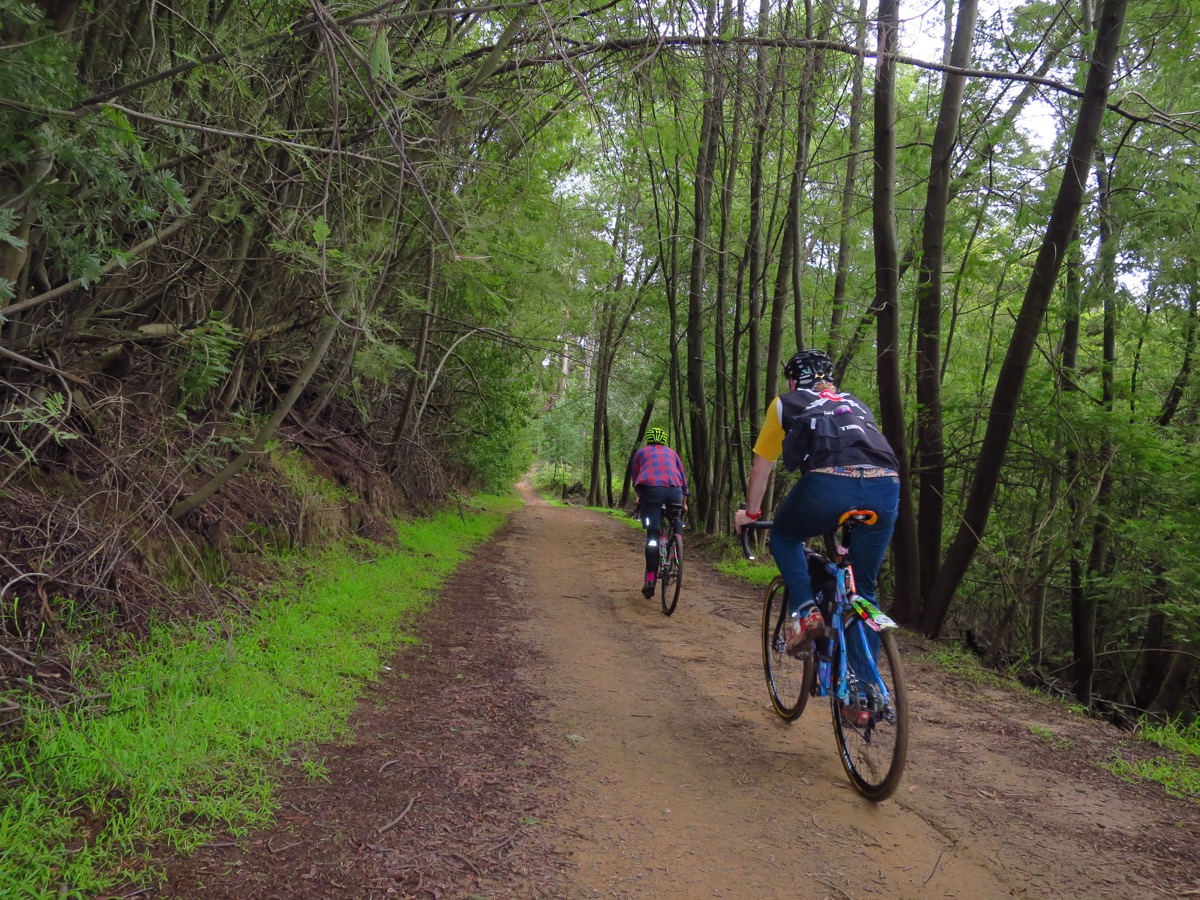 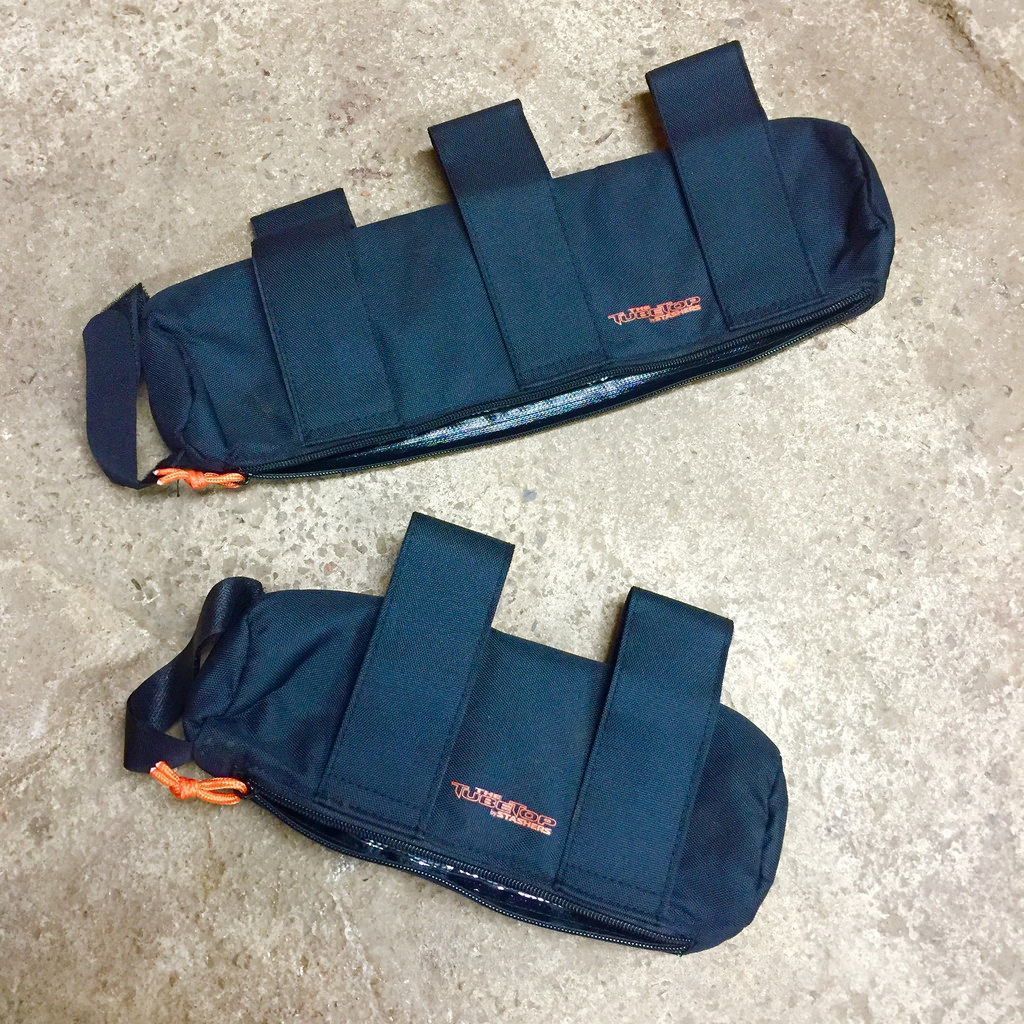 Being the sort of person who has no problem carrying several times that amount in my ever-present backpack, I wasn’t sure when I might utilize such a thing.

That is until the aforementioned ride with the Squid kids happened, and I knew that my primary woods stash was getting low.

Ordinarily I wrap cans up in a wool jersey and hope they don’t get bounced around so much in my bag that one or all get punctured. This time, I crammed them all in my Stashers and then put them in my bag for the journey. When we arrived, the beers were safe and sound and ready to re-stock the earth; 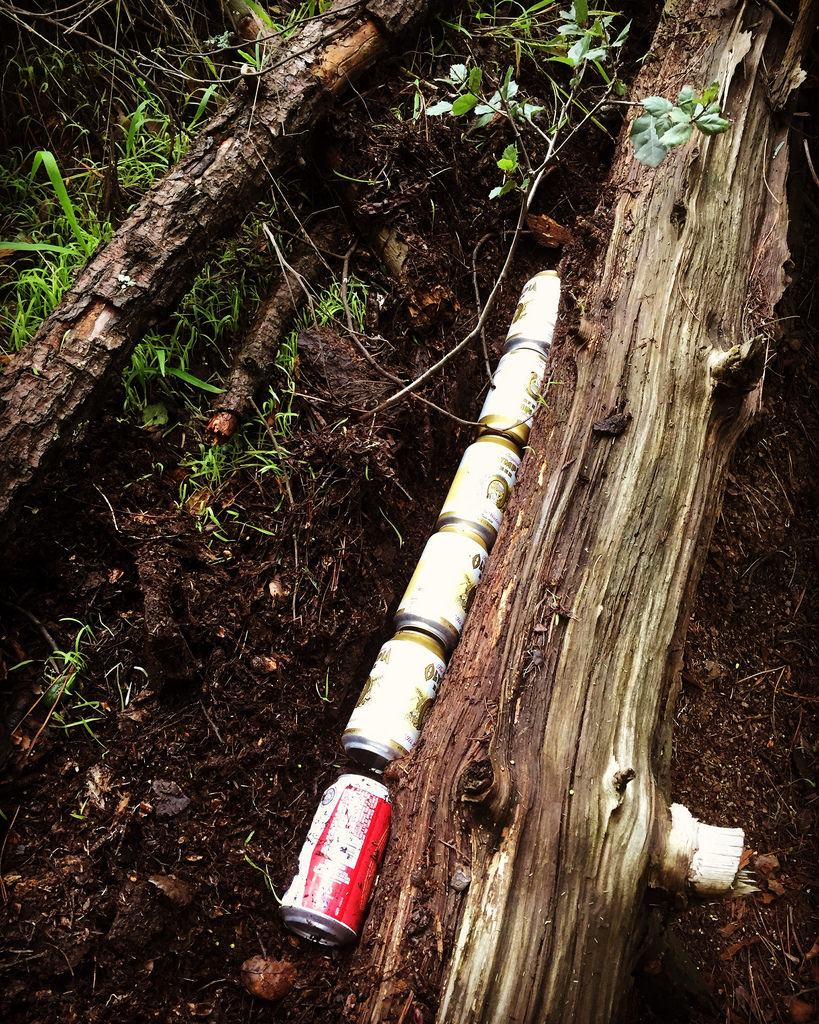 Maybe I’m not using them for their intended purpose, but as I did, they worked like a champ.

So that was the other stuff that kept me distracted, though soon enough I will be back to not doing stuff so that I can once again concentrate on doing this stuff.

2 Responses to “This just in- I’ve been too busy doing other stuff to do this stuff.”