And here we are, whether we like it or not, under a brand new rule; After five long weeks, when all was said and done, and the dust had settled on The Great AHTBM Model Building Nerd Off, my old buddy KB (or as he was known here, #11), pretty much cleaned up; 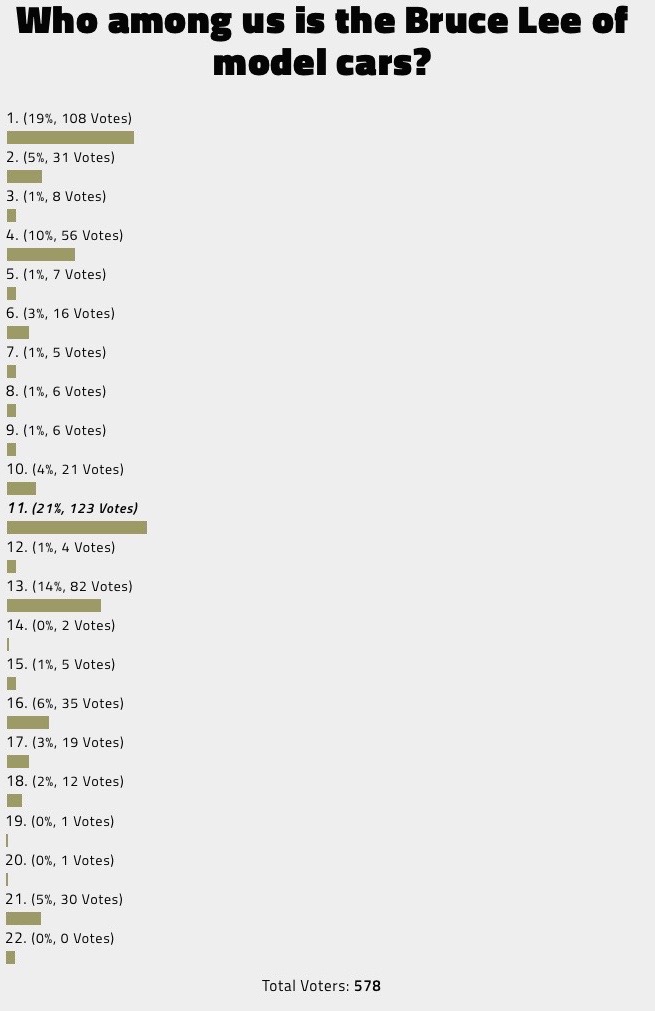 Of course his was the unbelievable Ford pickup; 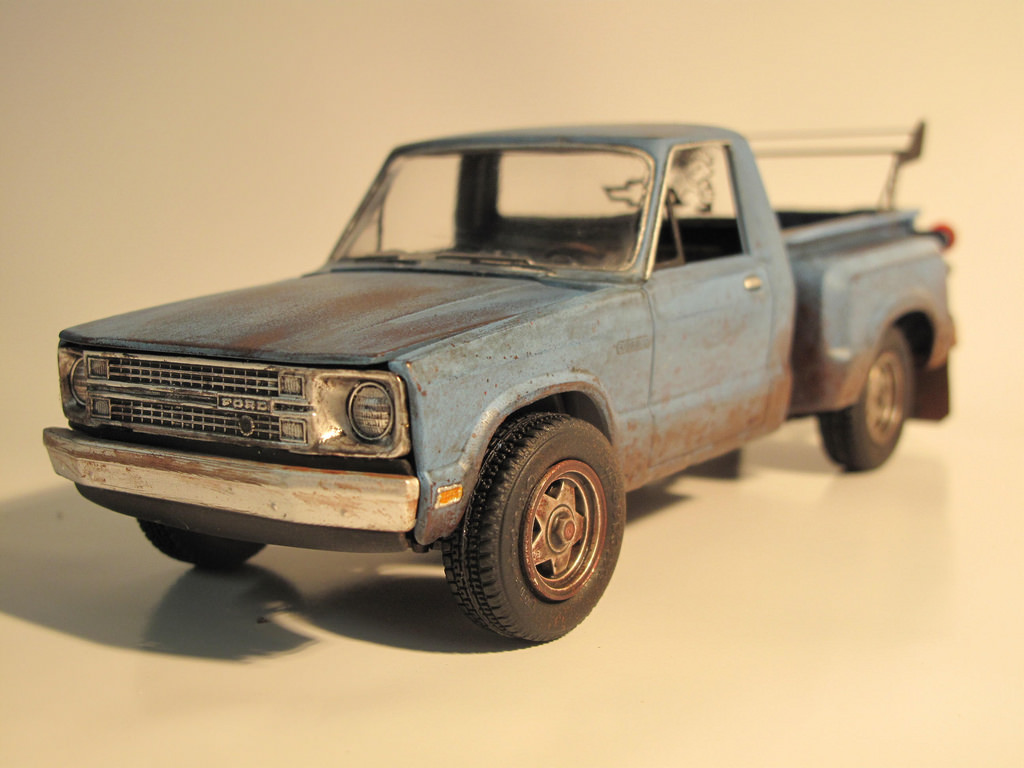 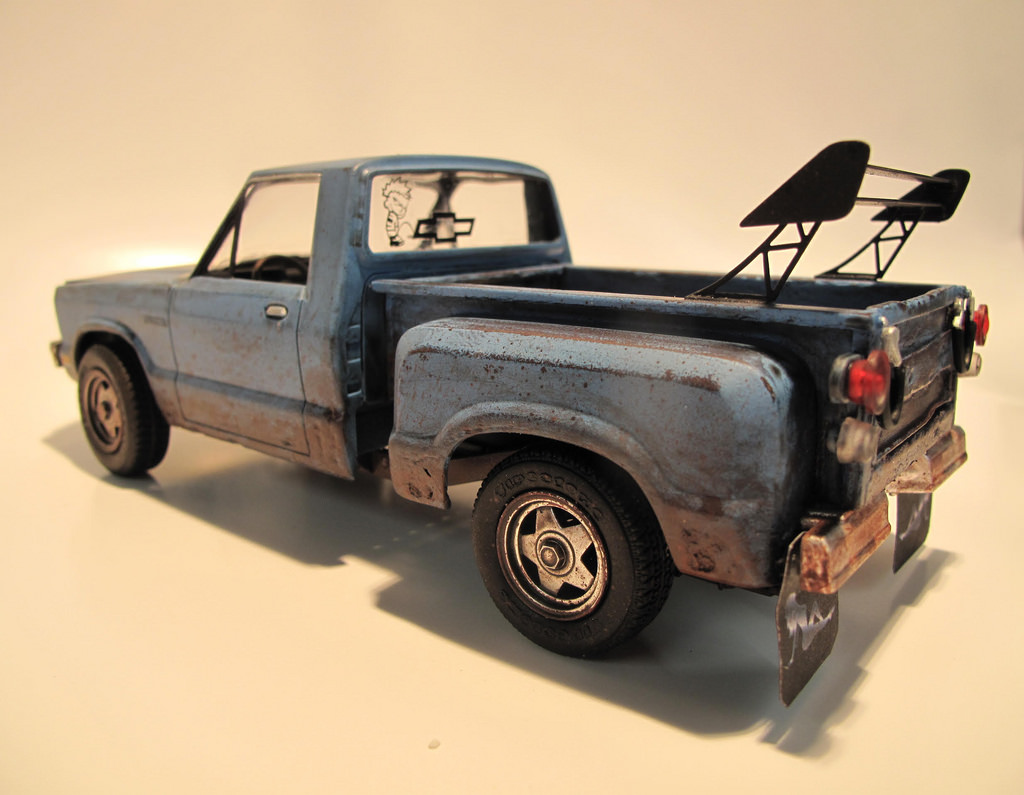 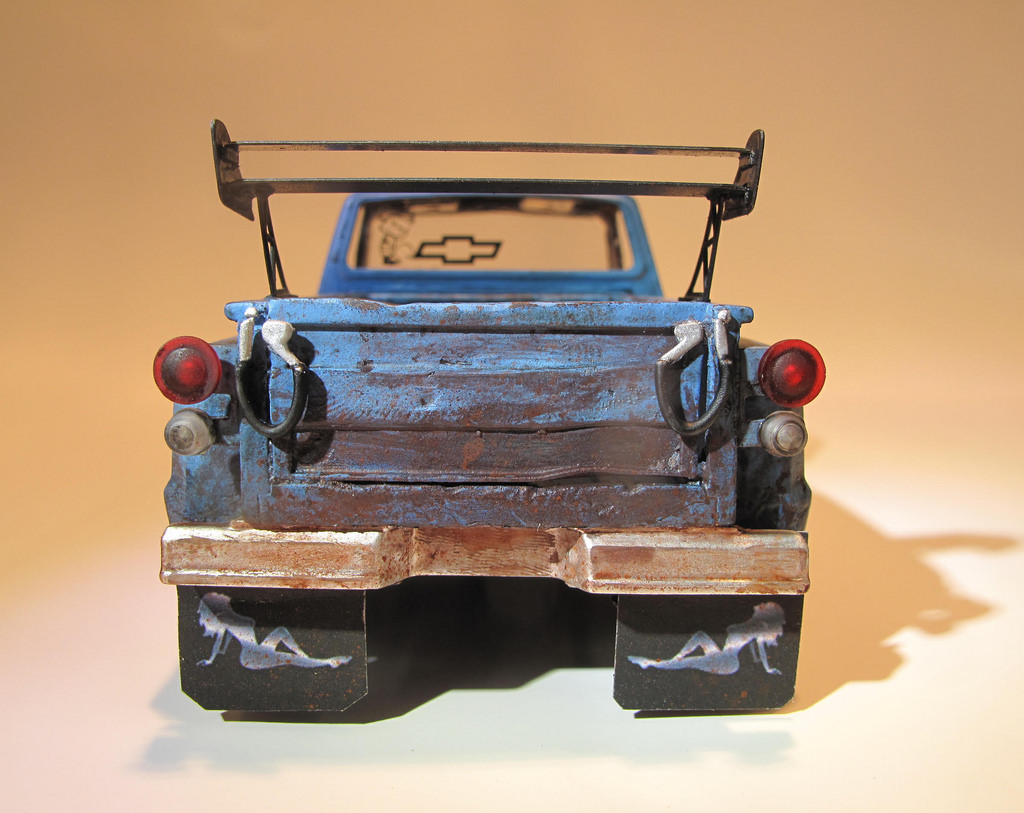 Apparently there was even a little tiny six pack of beer in the back as well.

Damn that guy and all of his skills. Even with every one of my limited efforts applied, I still ended up being second loser, but I’d say the right fella won, and I offer him my most sincere congratulations until next year and we all get another attempt at knocking him off his throne.

So a little bit of info about number eleven- His name is Kirk, he’s real damned tall, was at one point both my compatriot at Swobo as well as Santa Cruz Bikes, and even modeled in the ad I designed for them; 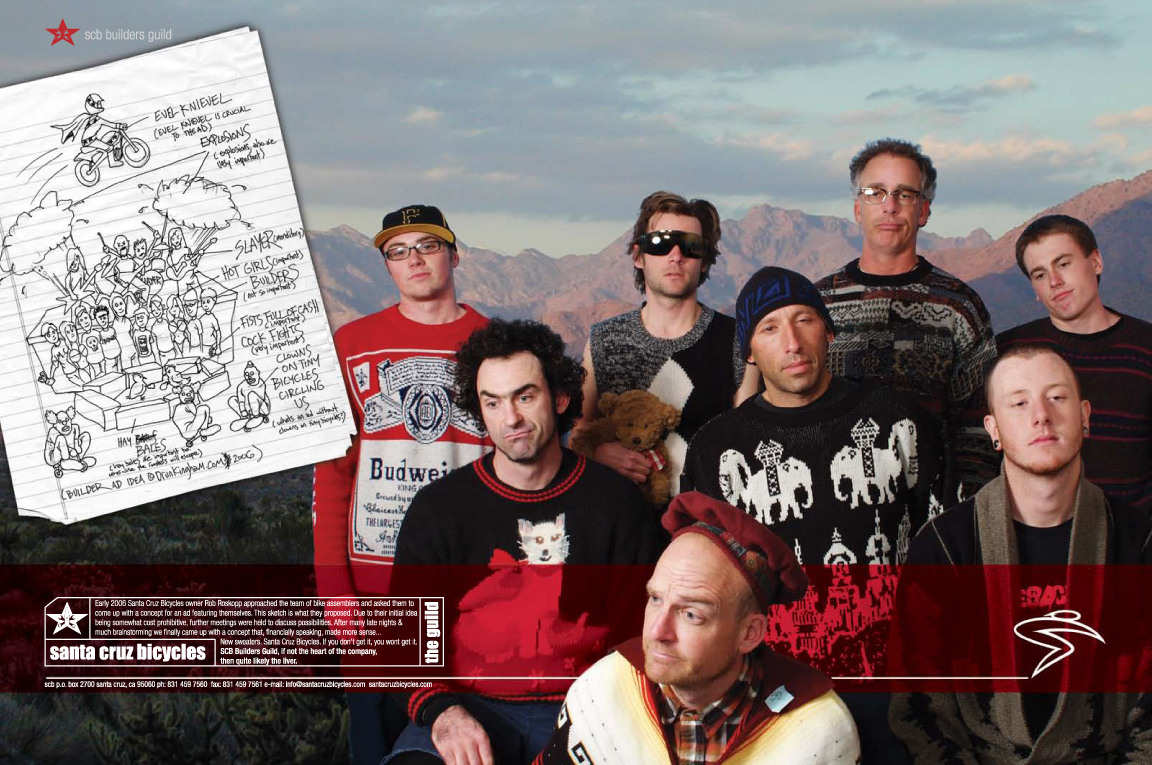 These days he lives up in Portland where for the last year and a half he’s operated a bike shop called Cat Six Bicycles, and ironically after he opened the shop was adopted by a little fella named Steve; 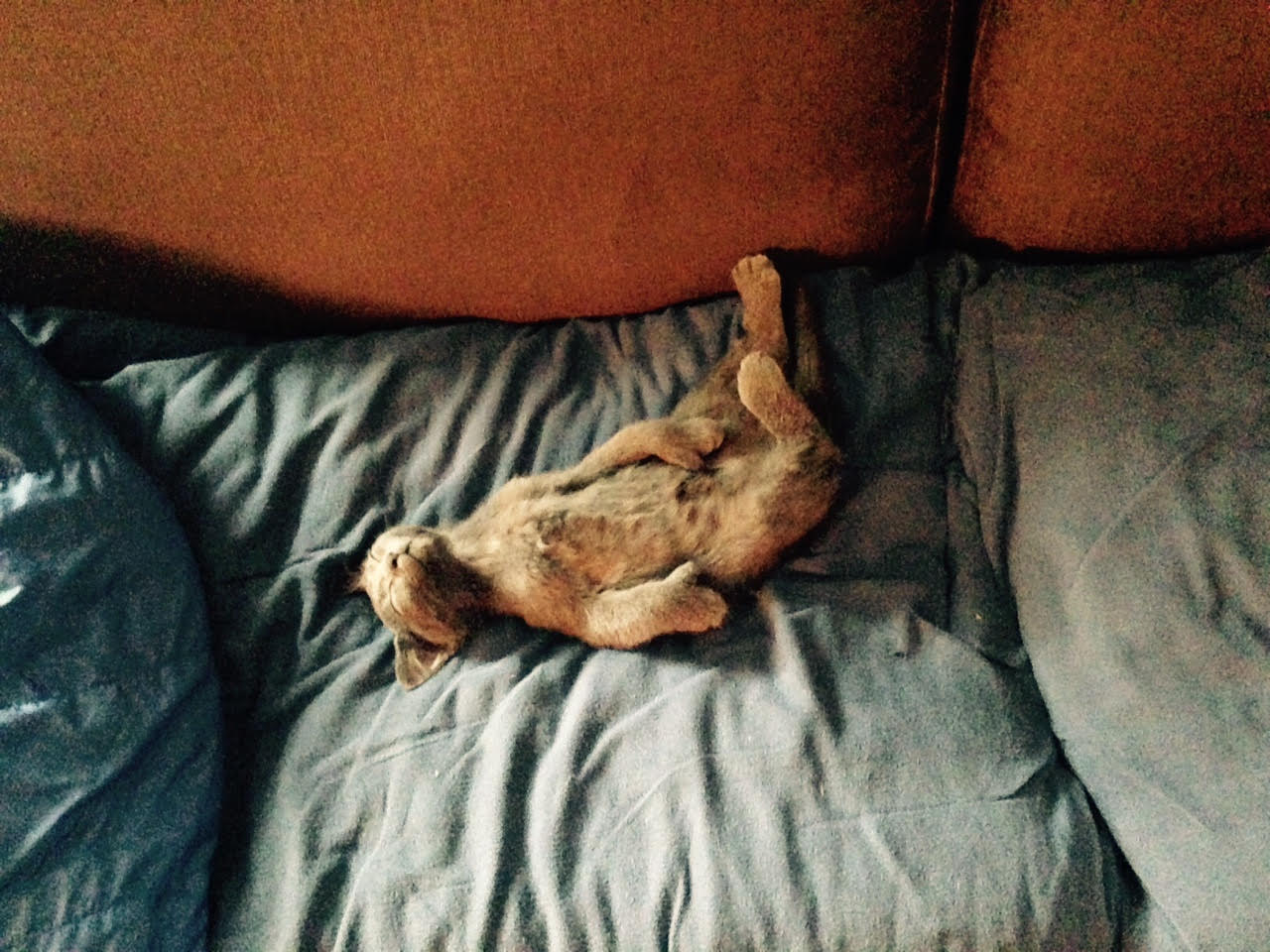 After a short line of cosmic occurrences, he also happened to darken my door for a night in the twilight of last week while he was enjoying a jaunt around California with his life partner. Besides commiserating on the depth of the model building rabbit hole, we also got to enjoy a traipse through the woods together; Like his cat, old Kirk certainly has nine lives, as I was behind him one evening when his tire blew out and he landed on his head, which resulted in a broken neck. Then some of of us might recall a time back in 2013 when he and Black Cat Todd were creamed by a car speeding in the wrong lane, leaving them both for dead; Clearly we’ve had some highs and lows in one another’s midst, but thankfully winning the Nerd Off falls somewhere in-between.

So besides tipping my cap to the tall drink of water that he is, I’d also like to sincerely thank all who both contributed their own amazing models, as well as those who voted for their favorites.

Moving on from KB’s victory to actual AHTBM related business things, last week I received a box of goods from Maximo Supremo residents Banjo Brothers, the contents of which might be appreciated by folks who are at the end of their rope when it comes to riding with their phone in sandwich bags; 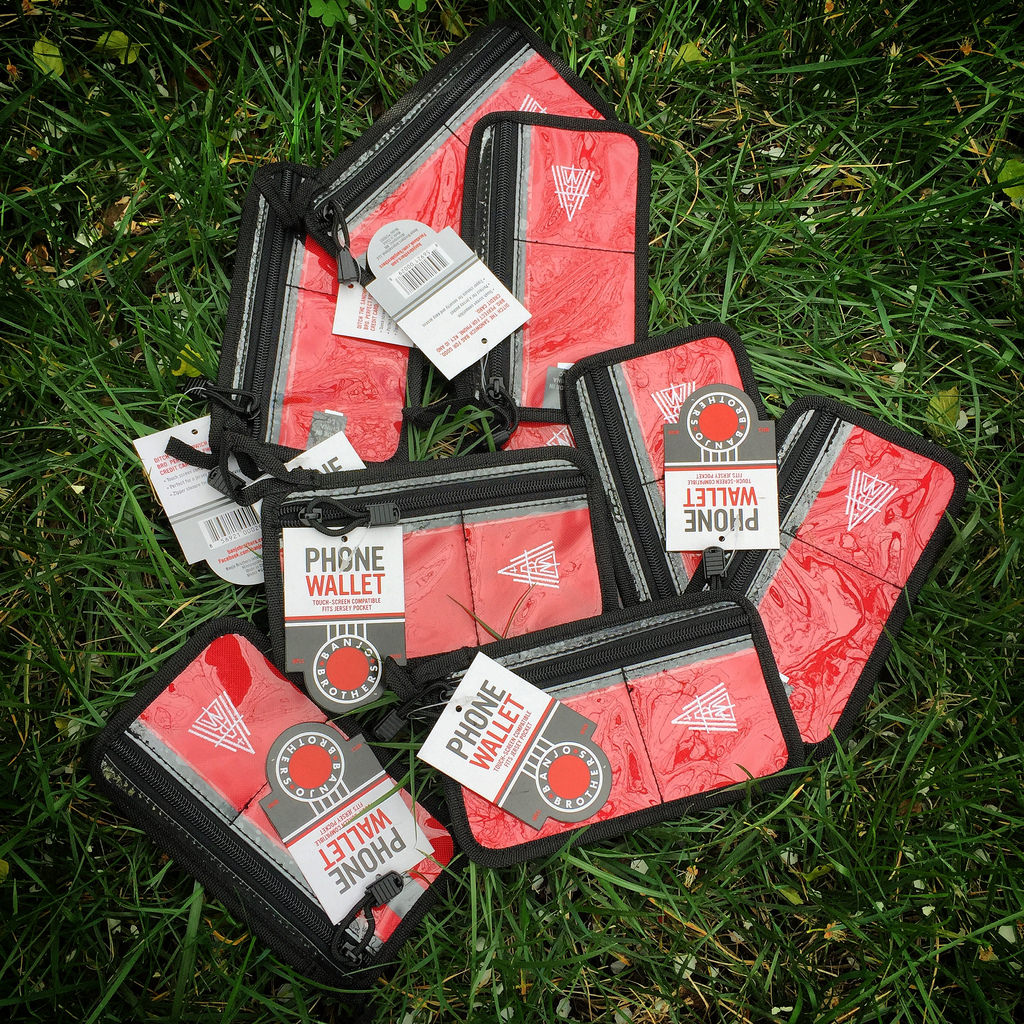 Why, these are genuine AHTBM branded Banjo Brothers phone wallets emblazoned with the ever popular Pfaltzgrpraphic KVLT logo; While supplies last, they can be found in the store for the low, low price of only eight dollars.

The only down side that I’ve seen thus far is that you can’t put sandwiches in them, but that doesn’t mean people shouldn’t at least try.

Now in closing I’m going to offer a taste from the mail bag from Vandeman. Now ordinarily I like to include a visual accompaniment with wordy emails. Due to the short attention span theatre that we are, I find that it assists in the digestion of information, but with this one, I didn’t find a need.

As a matter of fact, for the first time in the seven and a half years at this electronic pulpit, I didn’t request imagry, because the words paint such an amazing pictorial by themselves.

The mark of a true wordsmith if ever there was one.

So kick your shoes and at least one sock off and drink in Vende’s saga;

Yeah, well, so much shit went down that night it’s hard to even figure out where to begin.

First off, there was a big invite list and it seemed like it’d be a big group of riders. I was thinking it’d be a big rolling party and I guess I wasn’t the only one thinking along those lines. I was at Costco anyway so I picked up a big ol bag of soft pork jerky and figured that’d be a nice surprise for the night.

I also figured I’d get a nice easy solo ride out to the Donkey Carriages on my SS, soft pedal the whole way and make it out there without expending too much energy.

Then Verne had his work meltdown and people started showing up at my house.

So first Hugo shows up, rolling on a fatbike with a Coors Party Ball attached to a custom made carrier. Something they’d built for a Groupon party, apparently. I didn’t even know they made Party Balls anymore.

Then Vincent shows up, and then Alex shows up with his girlfriend (sorry to say I forgot her name), and she’s apparently not that strong of a rider but she’s got a hardtail with a homebuilt (maybe kit?) electric assist. So it’s already getting weird.

We wait around for a while, not sure if anyone else is going to show up, then roll on up to the Donkey Carriages. We were still hoping to see another group there, and in fact made it out to the picnic area a little after 9:15. But no, there’s no one else. So we sit around pounding red keg cups of beer, eating pork jerky and generally having (too much of) a good time, then head up to ride Little Dreamer. Little Dreamer was in great shape but the top of the Horizon return climb was really wet and muddy, and Esparto Summit trail even worse.

So I’m leading, and as we come around Esparto Summit towards the parking lot we come across of a group of hikers. They seem like they’ve got something to say about us being there on our bikes, but this isn’t my first rodeo, so I just put my head down (trying to be polite and keep my light out of their eyes) and push on through without stopping. Apparently Vincent does the same because right after I squirt out into the lot, there’s Vincent. So we sit around and wait. And no one shows up. So we wait some more. And at some point Vincent’s all “no time like the present” and breaks out his kit and starts to roll one up. Except right then we start to hear sirens and sure enough, a minute after that we can see the lights making the turn by the Donkey Carriages picnic tables. I’m ashamed to say I just jumped on my bike and jammed – sprinted back up Horizon and pulled in behind those water tanks. Just left Vincent there.

So I wait it out there for a bit, at this point there’s multiple cop cars but they’re all down in the lot where we exit the trail, so I kinda creep down to where I can see, and realize that there’s not just multiple cop cars, there’s an ambulance too.

So I don’t know exactly what happened but this is what I put together:

Alex’s girl crashed, hard, right in front of the hikers. Somehow all of the following happened: she cut her leg, badly. Her electric gizmo shorted out (bike went down in deep mud), badly, with lots of noise and sparks. And she barfed up copious amounts of beer n pork jerky.

To make a long story a little shorter it turns out that the hikers not only called 911 but also reported either a bomb or an explosion (the shorting out electric drive), hence all of the cops.

The cops were cool though, once they figured out what was going on they really didn’t give a shit about us being on the trail. They also gave the hikers kind of a hard time. Also, they’d never seen a fat bike let alone one with a party ball attached and they thought that was pretty cool.

They took Alex and his girlfriend away in an ambulance, and took their bikes to the maintenance yard right there by the Donkey Carriages.

Hugo and I rode home on the road.

Alex’s car was gone from my house when I got up in the morning (after sleeping through my alarm and missing a meeting).

And like I said, I don’t know what happened to Vincent.

I can’t remember exactly, but I think this story and Saturday’s One For The Weekend have been the only two things that made me inadvertently spit up on my keyboard.

Between Vandeman’s prose, and KB’s model building chops, the old king is most certainly dead.

Long live the new one.

One Response to “The King is dead.”