Once again, it’s time to circle the proverbial wagons.

As it was three years ago, it’s up to We The People to try and stem the strangling tide of privatized hands in the free cookie jar that is the internet.

If you’d like, you can go back and read the whole breakdown in this post from 2014, or I’ll just copy and paste an email a pretty smart cat named Matt sent me back then, in which he summed up the whole fiasco in layperson’s terms;

Summed up in a couple of sentences: Net Neutrality is designed to protect the Internet from becoming the property of private industry. The Internet is currently a publicly owned technology. We do pay for access to get in the door, but once we’re inside we have the freedom to go wherever. We give up those rights then we’re giving up control to the most powerful medium of communication the world has ever known. To the f**king cable companies.

This is a key moment in the history of the Internet. If the Internet doesn’t receive the correct reclassification by the FCC, we’ll see monumental changes in internet access in the USA. The glorious free-for-all that currently exists will be filled with new tolls and tiers, with your cable provider controlling what you see. Comcast is perennially one of the most hated companies in America. Do you really want them deciding how you use the Internet?

Ok then… As Mr. Oliver stated in the video there, which if you didn’t watch, I suggest you do, this time around the FCC has made it fairly difficult (as The Man so often does) for you to voice your opinion on the matter. In response, the people from Last Week Tonight bought the URL Go FCC Yourself which up until a couple of days ago directed commenters directly to the page on which they could have their thoughts on the matter heard. 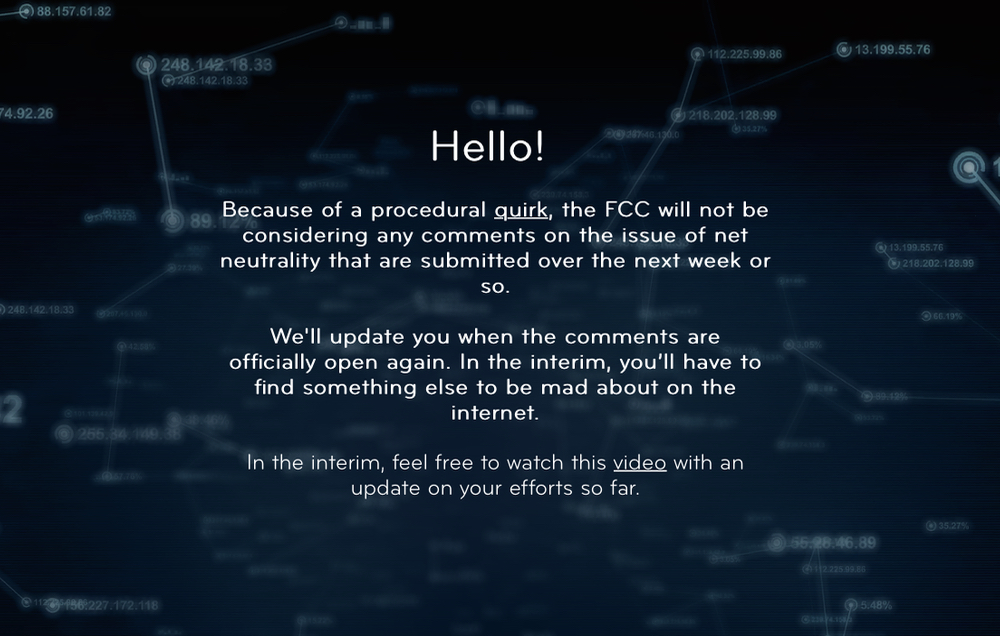 Which directs you to this video explaining the hold up;

As Mr. Oliver notes, all that needs to be said within the comment page once it’s reopened is something along these lines;

If by chance you’re a luddite like me and would simply like to make contact the old fashioned way, I have you covered there as well;

How’s the adage go? Individually we might just be bricks, but together we make a wall.

Or did I just make that up?

Anyway, personally, I’d rather dedicate posts after post to bikes, and art, and skateboards, and music, and boys and girls having fun doing cool stuff, but because The Man is constantly hard at work churning out new and creative ways to screw the people, I can’t.

Fortunately, we stand together on watch, in an effort to make sure that if they’re going to try and bulldoze us, at the very least, we’re gonna put up a fight.

One Response to “Here we go again.”