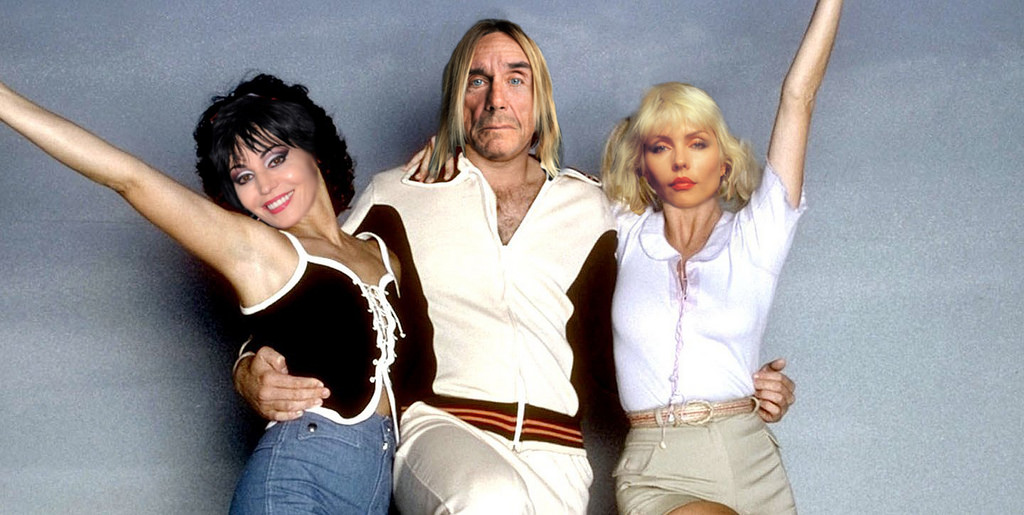 Let it be known that any time I go to San Diego county, I will return to write a post with a Three’s Company reference.

Remember this one from back in November?

That wasn’t the first, and this one won’t be the last.

“So why did you go to San Diego this time, Stevil?” is a question that wasn’t just asked by anyone.

Well, I’ll tell you just the same. Besides going down to visit a friend or two, I went to pick up a tool that was once used by a bit of an enigma named Garry Scott Davis, with which he created some of the finest bits of fanzinedom this side of Answer Me! (though the two are in no way, shape or form related.)

The short version is that a couple of months ago I caught wind that Garry was going to scrap the typewriter he used for the first several years worth of issues of his seminal magazine; 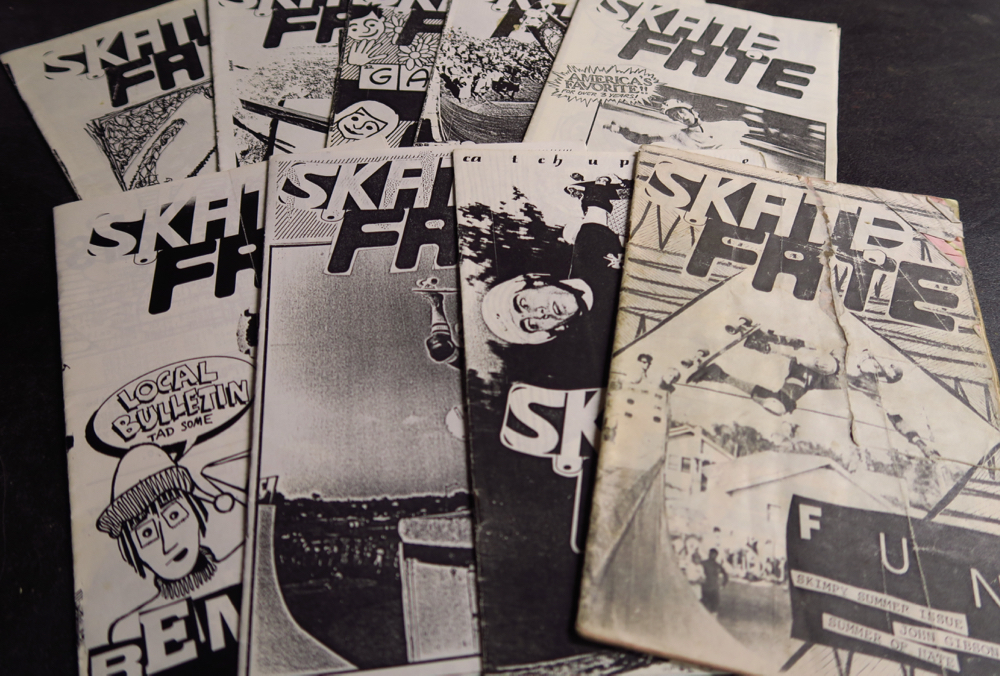 Now being that this fanzine was a huge influence on me in my younger years, as was Garry himself, it only seemed natural to me that if he was going to thrift store the machine he used to make the zine, I should probably at least attempt to assume the role of its steward. It seemed perfectly reasonable to me anyway.

So that’s what I did. On my first day in town however, my dear old compatriot Toshi (who I first met many, many years ago when he was in the employ of Giro, (and who’s been reintroduced in this post during his stint at GoPro), came to fetch me at the airport and immediately said something along the lines of “let’s go get weird in Tijuana“.

Why not? I’d never been, and it’s not like while we were on the other side, Tr**p would belch out a preposterously repugnant Tweet resulting in the boarder shutting down; 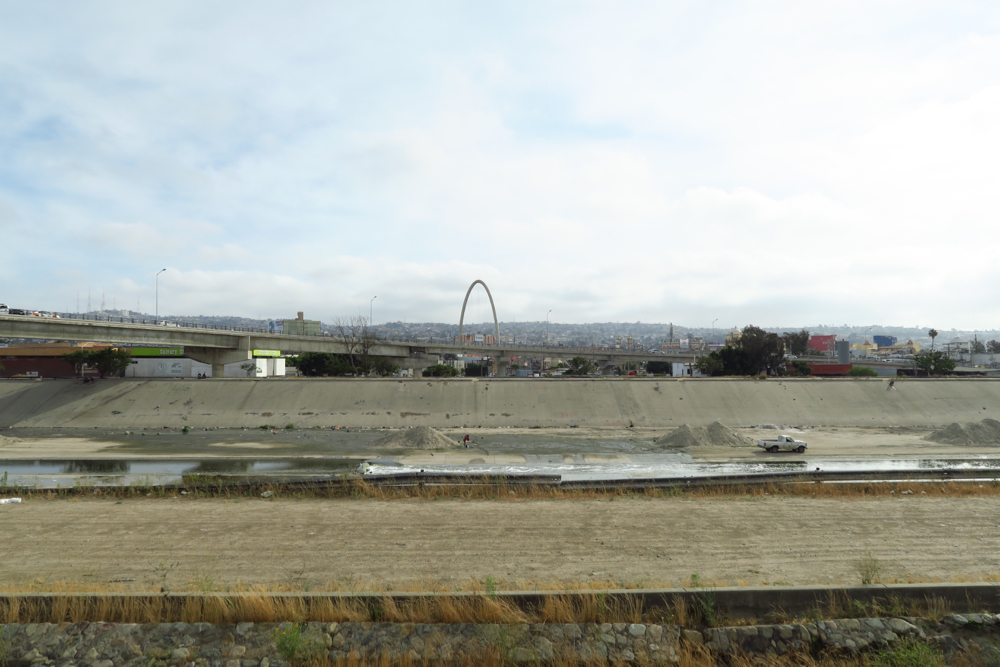 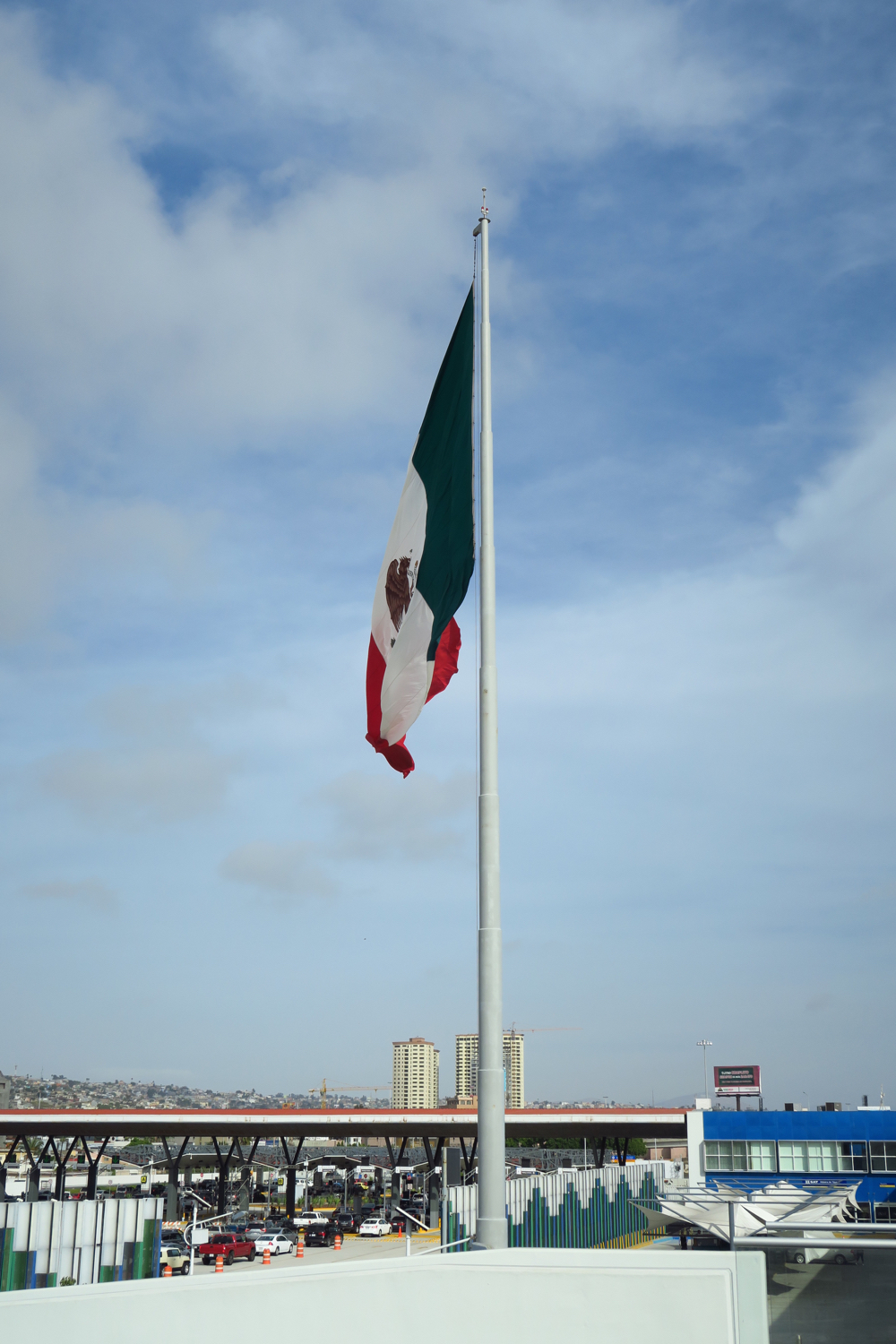 Granted, things didn’t get so far to the weird that we ended up at a donkey show, and in fact we didn’t get that weird at all. It was quite the contrary in fact, as we made our way to Hotel Caesars; 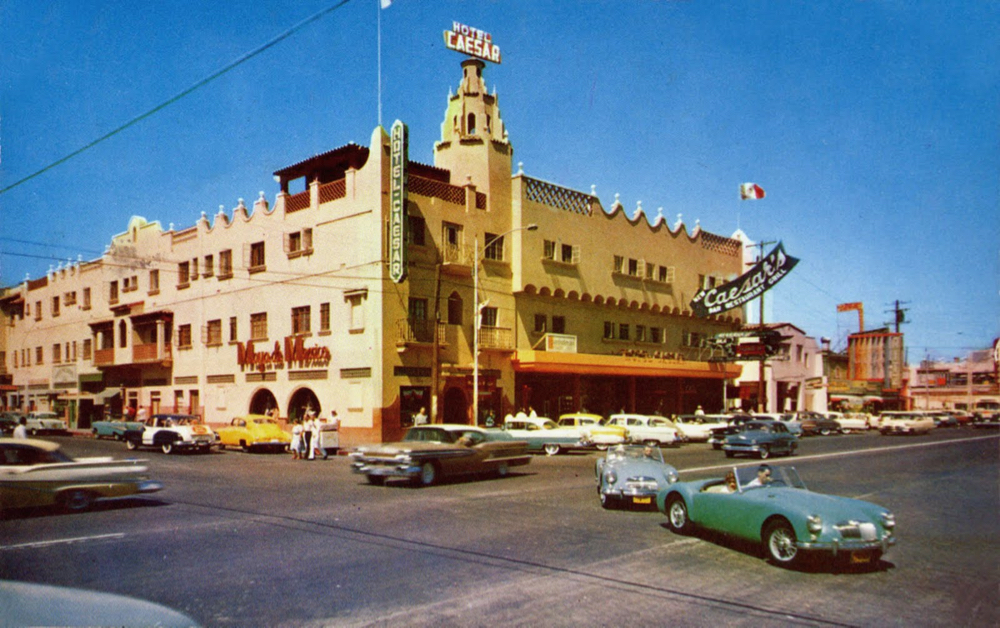 There we had an amazing lunch, drank our body weight in wine and beer, and walked out with a whopping $38.00 tab.

I suggest if at any point you ever get the chance to go, you should take it. And don’t neglect to get the salad, as it was Caesar who originally invented it.

After stuffing our bodies, eventually we made our way back stateside, and headed home to drop off my garbage, and rest up for the next day’s activities.

Mid-way into the following day, I’d made a plan to meet with Garry at a spot I knew we were both familiar, the legendary Lou’s Records in Encinitas; I went in, browsed around a bit, saw that TSOL had a new record, which I bought, because duh; 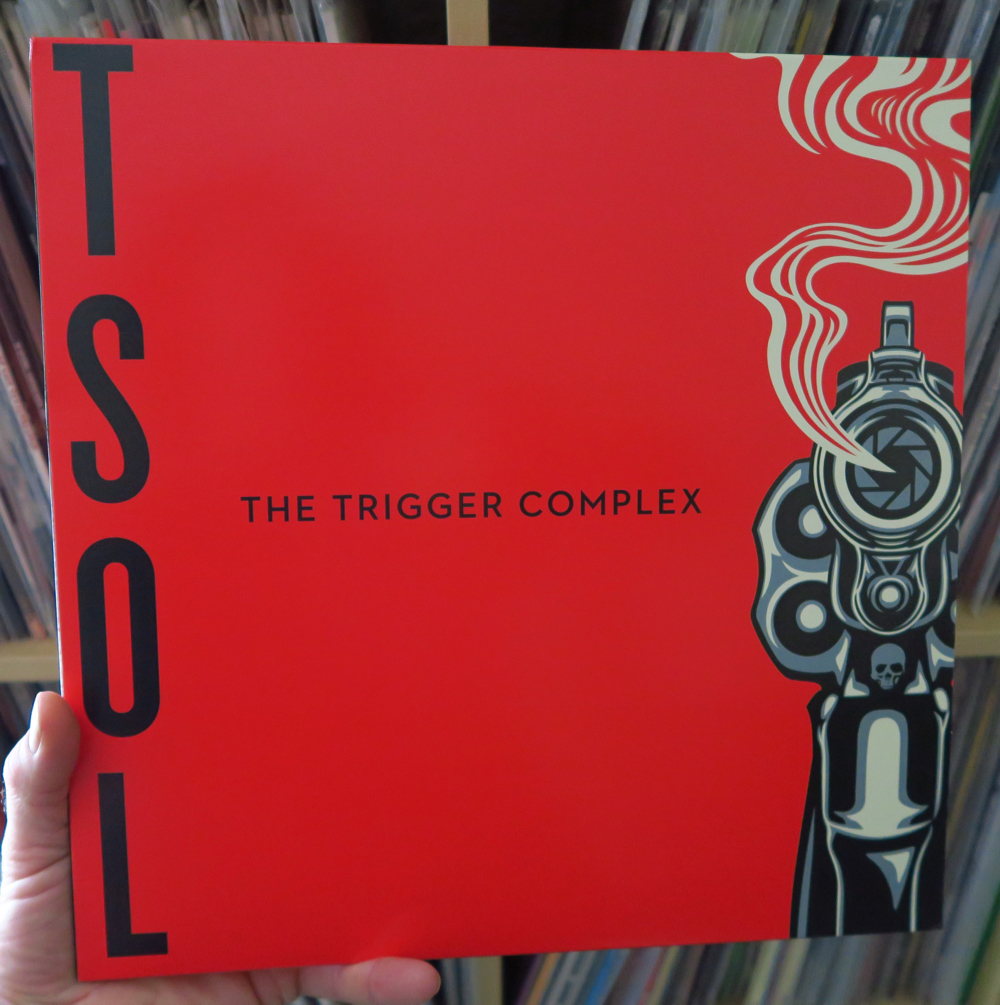 And then spied Garry from across the way.

I introduced myself and we headed off for a bite of lunch. While we chatted and caught up on his life and times, I offered him an assortment of zines I’d made, as well as a copy of the Who Rides The Tiger Record. After a time I asked if he’d sign a copy of the issue of Thrasher he’d been on the cover of; 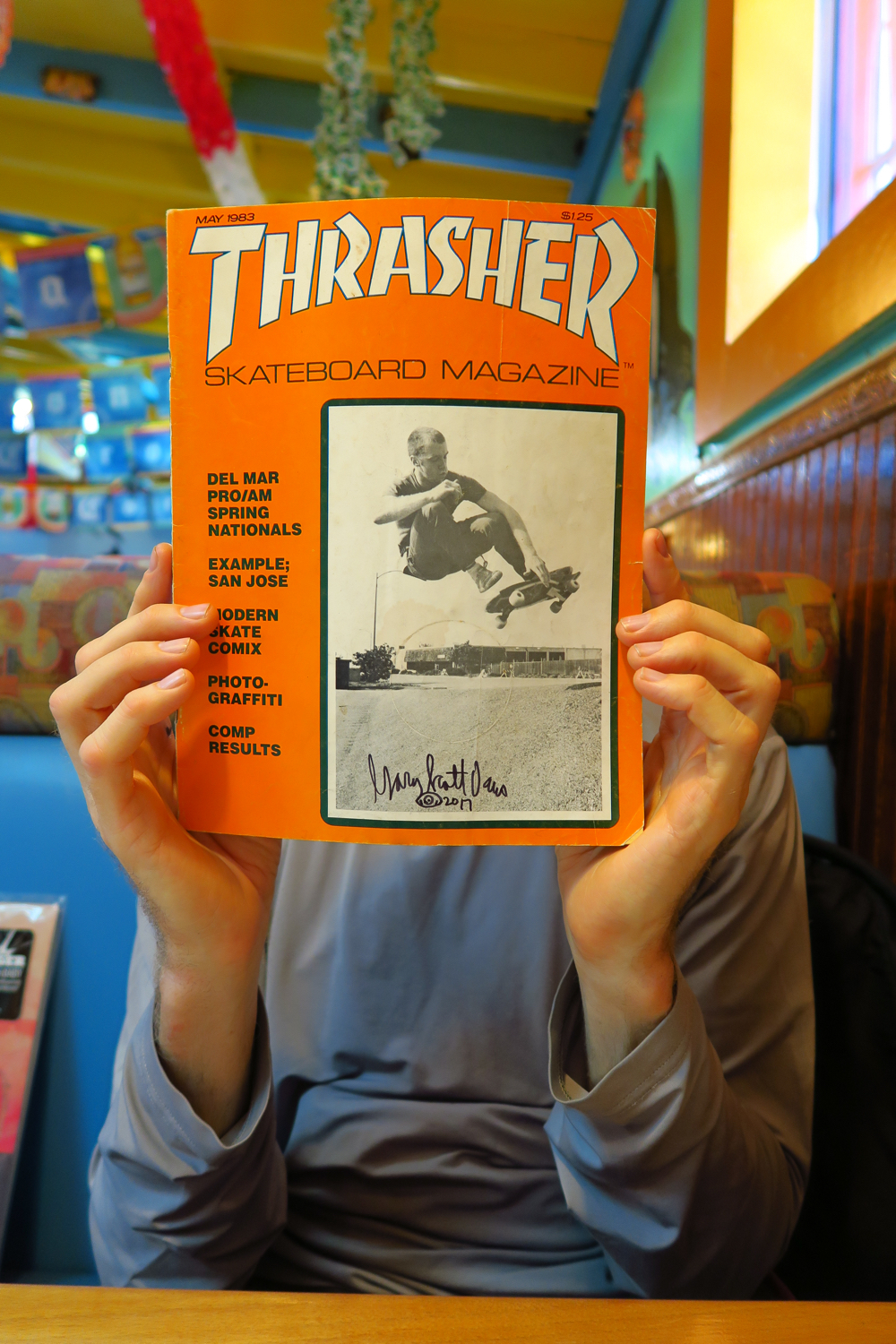 We made a bit more small talk before he finally addressed the elephant in the room, which of course was why a total stranger would travel almost 500 miles to get a fifty-seven year old typewriter.

My plan is to write a much more detailed account for future print publication, but the condensed version, and as I explained to him is that because I have found myself quite by accident making a living as a writer (for lack of a better word). It was his influence as a writer, a creator, and naturally, a skateboarder that helped in steering my young life in a very specific direction; 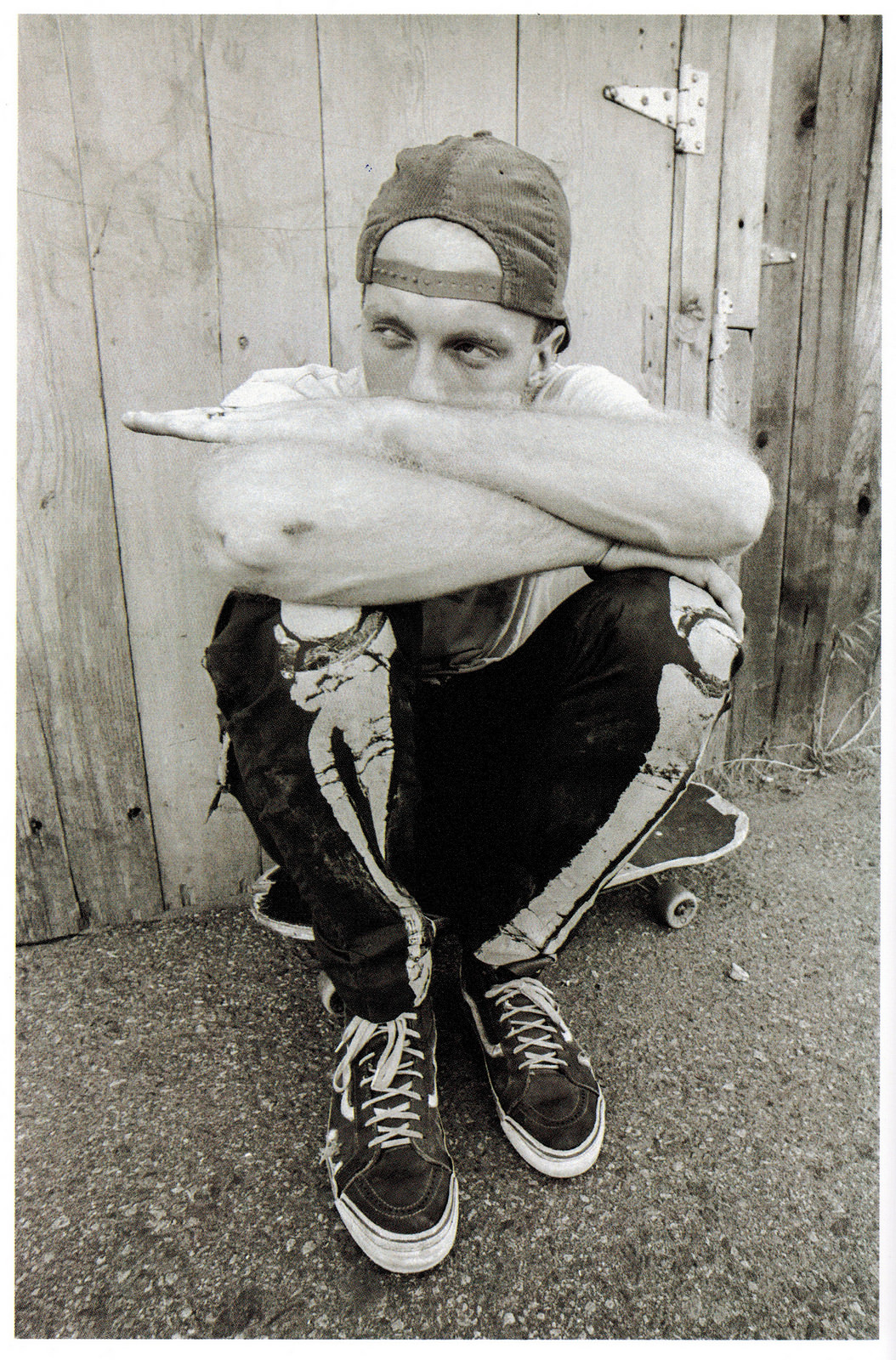 I went on to describe the fact that there was no way he could have an unobjective perspective on the influence he had on a seventeen year old kid, living fifteen hundred miles away, thirty years ago. I concluded with my pebble analogy about never knowing where the waves go or what sort of change they’ll affect as they travel.

I think that might have resonated with him, but I also understand that if the shoe was on the other foot, I most likely would have found it a bit strange as well.

At that point we parted ways, and Toshi and I met up with photographer to the stars, Embry Rucker, and he popped off a shot of my new acquisition worthy of framing; 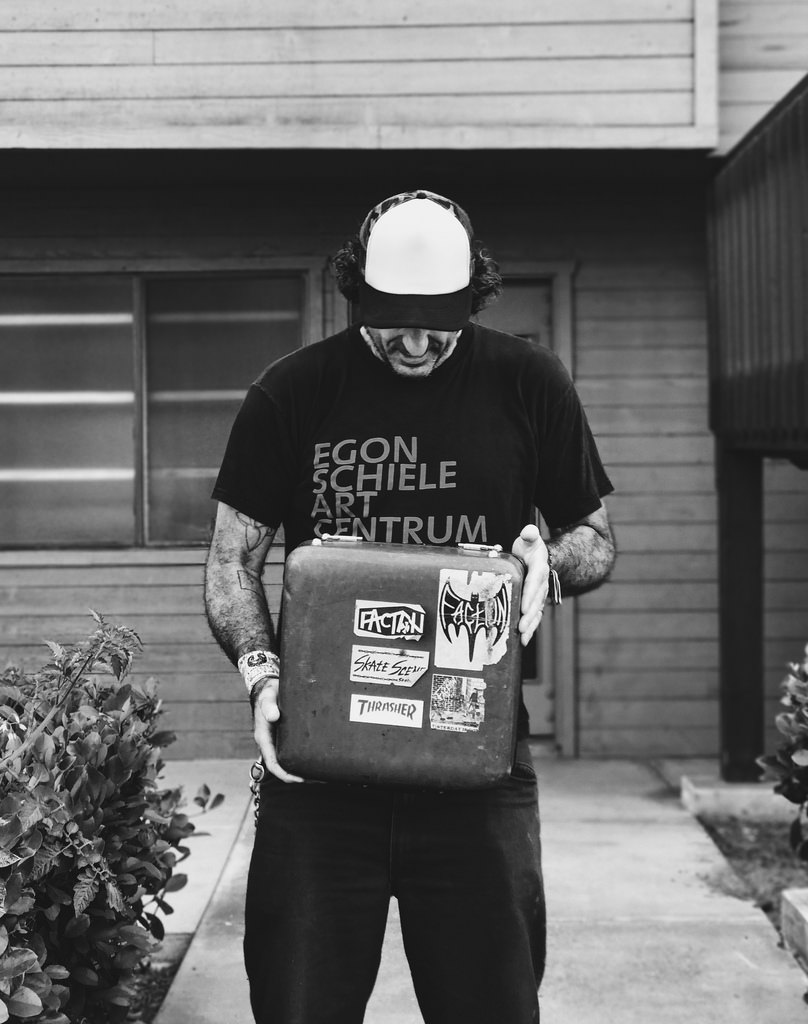 It just so happened that Lincoln, Nebraska bike nerd, and international skateboard legend Kevin ‘The Good Problem‘ Wilkins was in town that night, so after a time, Toshi, Kevin, GSD and myself sat down for a meal together as the degrees of separation were whittled away, and stories began to fly.

It was a beautiful conclusion to a beautiful day, and with high-fives, hugs, and handshakes, we all went our different ways.

The following day found me several miles to the north in the company of Steve Delacruz, (who we last met in this post) at his Garage Works suspension treatment facility; 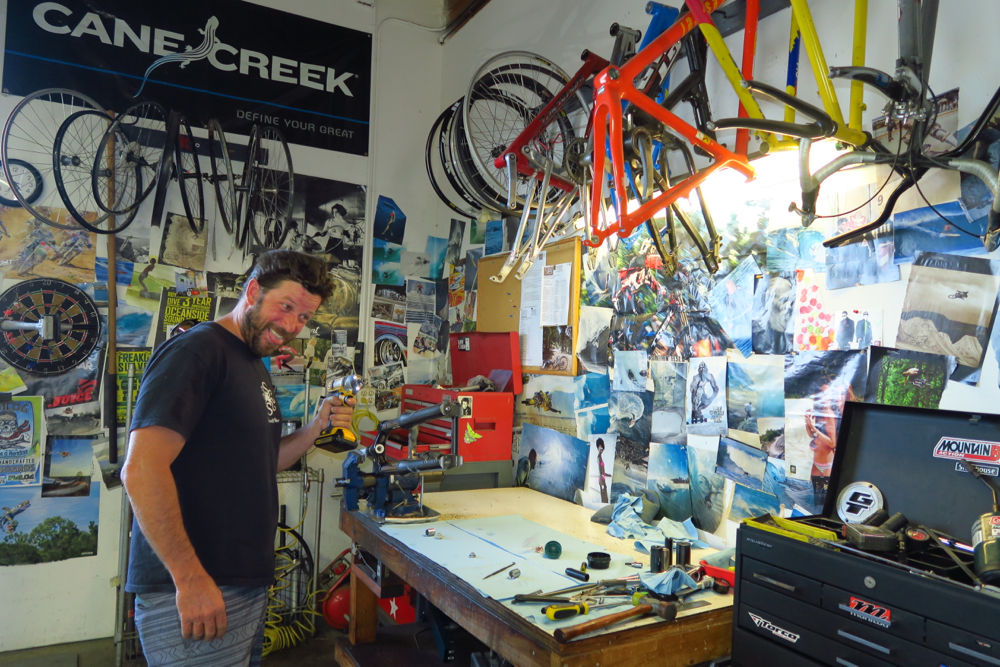 Like Toshi, I’ve know this fella for years and years, though only get the opportunity to see him annually.

In our short time together we checked all the boxes. Drank a couple of beers, caught up on each other’s lives, checked out his shop, and avoided breaking any bones on his backyard mini ramp; Eventually he had to take over babysitting duties for his spawn, and I began the short return trip to home base, where we formulated a plan to meet up for drinks with Embry and Gordon Yeager of Velo Hanger.

Before any of that commenced however, I had to do my duty and stop by one of San Diego county’s famed red curbs for a sampling.

It turned out that we both got the chance to sample one another;

I thought yesterday was Sunday, so I felt compelled to go out and find a curb. It turns out it was actually Saturday. Did everyone know that but me? Anyhoo, while playing on said curb, I ultimately concluded that they put some special mixture in the paint/cement down here to give them a surface not unlike polished ice covered with a thin sheen of oil, and then topped off with millions of tiny ball bearings. If I was a smarter person, I'd throw a 'TIIIMMMBBEERRR' in here for good measure. If you listen closely, you can hear both of my butt implants explode. #SlappySunday

Sometimes you grind the curb, and sometimes the curb grinds you.

Once I was sufficiently sweaty and sore, I headed out to meet the crew at the bar, where we chatted, joked, commiserated, reminisced, and before I knew it, it was late and we were the final remaining humans in the bar. Just then Gordon pointed out a display of pewter bottle toppers directly in front of where we were sitting.

However, I was knocked onto my heels when I saw the bourbon barfing viking, and it was then that my life was changed forever; 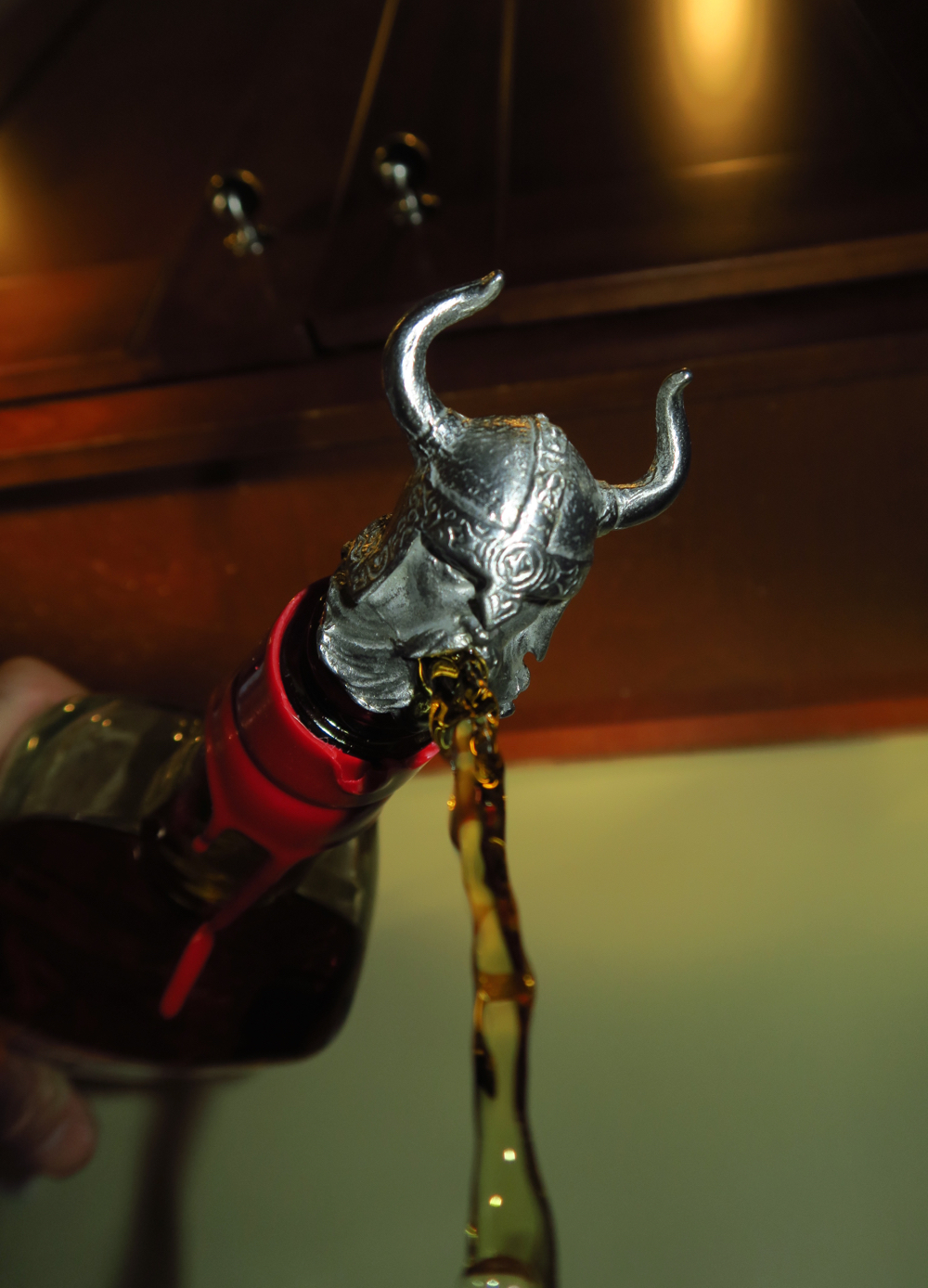 Recognizing my enthusiasm, (if I didn’t say that it was like a grown up version of a crazy straw, then I most certainly thought it), Gordon very graciously bought it for me, and said something along the lines of ‘may all of your shots be viking vomit’.

The hour was late, and I had to begin my return to the northern part of the state on the early side, so we said our goodbyes.

With the details of the trip and warm exchanges now in the rearview mirror, and standing at my computer machine banging out the highlights of the last few days, I realize it’s difficult to write a post and glaze over the very reason I was there to begin with.

As I previously mentioned, somewhere, and some way (most likely Dirt Rag, as well as a fanzine I will produce at a later date), there will be a far more detailed retelling of the story surrounding the typewriter.

Until then we have this sterile electronic medium with which to hit the bullet points.
Thanks to Toshi, and Embry, and Gordon, and GSD, and certainly all of the yoga pant wearing locals for making my stay in Encinitas a truly memorable one.

Sooner than later, I’ll return to visit the land of sun, and when I do, it’s better bet than good that I’ll probably also take a step that is new.

3 Responses to “I came and knocked on their door.”