I’m back from the beyond with tales to tell.

Truth be told, as anyone in our particular fold can attest to, tis the season to get away. After this past winter, (at least in this hemisphere), following the sun has become of a greater importance than usual.

That is at least in part what I got into this past weekend, though for some of it, the sun was off having fun elsewhere.

The gist of my departure was a meet up with my parents, my sister, and her beau to help celebrate my mom’s birthday, my pop’s birthday, their 53rd anniversary, Mother’s Day, Father’s Day, and probably at least five other notable occasions I can’t remember.

For the attentive among us, you might recall a time last August when my dad came to California to meet me and we went camping for a few days.

It was during that time when we also scouted a few spots for our eventual sorta family reunion. With the spot secured, the lot of us met up on the Yuba River, where we ate, drank and got merry; 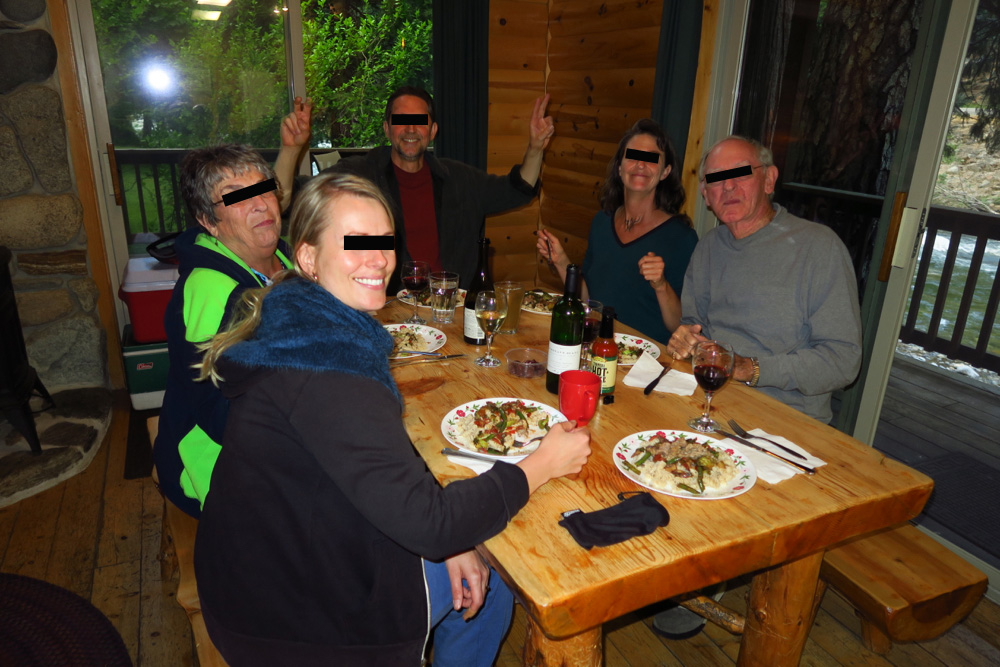 It’s been said that everyone in, or related to my family has the same eyes.

However, immediately upon my arrival to town, I swung by Yuba Expeditions to investigate what they had cooking as far as room for me in the weekend’s scheduled shuttle runs.

First things first however, I was invited to partake in a triple shot; 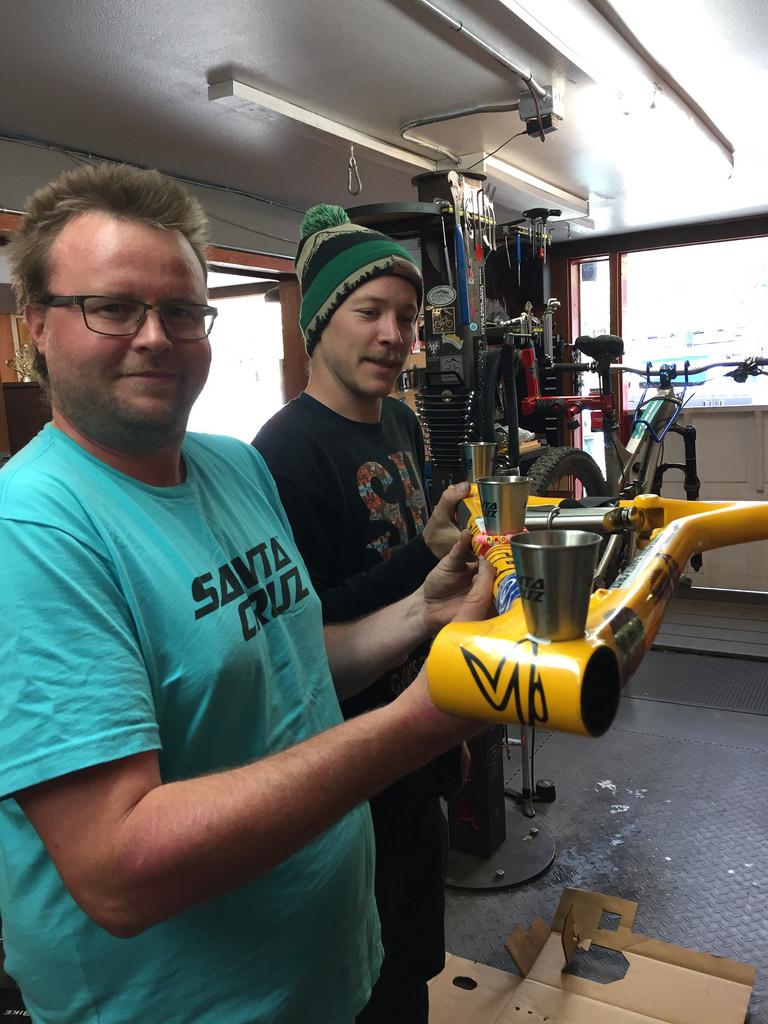 The dirts at the shop then notified me that there was still quite a bit of snow at the summit, and though the trail had been flagged, there was about four miles of drift trudging to do before I’d find any brown.

Taking note that the weather report also noted that it would be raining in Downieville for the next two days (which meant more snow up top), I opted to take the low road and assuming I’d find sun, chase it along the north Yuba trail out of town.

I bid my drinking companions farewell, and made my way on up the road to peace out with my blood.

For the three days that followed, we broke bread, booze, and played an assortment of games as the mighty river rushed outside.

After waking up on the first day, and while trudging around outside in an attempt at isolating all of my sore spots, I happened upon the evidence of a substantially sized bear we’d crossed paths with the previous evening having had its way with my sister’s car; Apparently not being in the market for a mid-sized import, he wandered back into the woods without leaving so much as an apology note.

So it was some time around the crack of mid-morning and with spots of blue finally overhead, I grabbed my bikecycle, and headed off to points away; As the morning turned to day, the ascent got narrower, and more densely covered in poison oak, the clouds began to settle in. After a couple of hours I decided that it was time to pull the chord, and begin plotting my return.

Thankfully I avoided the imminent rain, and got back to basecamp just in time for afternoon meditation; Day one closed out with a bit more more chilling, eating, and an ever dwindling supply of bourbon.

My bloodline might never be accused of being exceptional at any one thing, but we can relax with the best of them.

While I was in them thar hills, I did think that I might be able to take a dip at some point, but upon our next day’s arrival at my favorite secret swimming hole, (which during the summer months usually looks like this); I came to find that at this point in the early season, it was looking like this; My sleepy little swimming hole currently is neither.

Not feeling especially inclined to backflip to my frozen death, I instead opted to hike amongst the woods, and drink in the silence of solitude with my compatriots, the three of which make a mighty fine looking folk metal band; Around this time, the weather began to come in with a touch of fury, so we headed out of the sticks, and back to shelter.

The following day let go of a lot more rain, which meant more hunkering down, and more chatting the day away as the world continued to turn. Feeling rather tired from the previous days’ worth of doing nothing, around mid day I opted for a nap, and then a walk into the woods. Poking along, something on my left caught my eye; I feel a Hardy Boys mystery coming on; Now, in my time on earth, a lot of things have been said about me. One thing that’s never been uttered is that I haven’t had a life long love affair with holes, tunnels, caves and the like.

As a matter of fact, when expressing this to my one time high school crush Melanie Durbin, she said “you should have been a proctologist“.

She was a real smart ass.

Anyhow, abandoned mines fit right up there with the previously mentioned earth-voids, so that partially obscured ‘keep out’ sign might as well have said, “STEVIL, YOU OLD SO-AND- SO! GET YOUR ASS IN HERE!”

Which is exactly what I did; I strained my eyes to see the furthest reaches of the tunnel, and illuminating it with a flashlight, halfway expected to see something like this; Alas, in my time underground, I came across nary a single Crawler.

At least that I was aware of.

Upon emerging back into the sunlight, I headed back to rejoin the group where we began to wrap up our time together, where we raised a few more glasses to more family time, and fewer bears breaking into cars.

To the best of my recollection, that’s my story and I’m sticking to it.

Now, before we part ways, I will toss out a bit of information that landed in my inbox while I was away from a fellow named Steve that read a little something like this;

Could you share this with the AHTBM peeps, I think it is pretty rad.

The company I wrench for did a collaboration with Columbus, Ohio local tattoo artist, Haley Hagerman. They are raffling off a roll: S:1 Sport Bike she painted to celebrate the LGBTQ community; All proceeds go to Stonewall Columbus.

People can see the bike in person and get tickets during Columbus Pride Fest!

Good lord almighty, that is a fine looking machine. Having done a couple of bike frames of my own in recent years, I applaud Haley’s efforts, and fully sympathize with what assuredly resulted in her crossed eyes and cramped hands.

As Steve noted, if you’d like to pitch in and get in the running to win this work of art, throw a ten spot or two in for the raffle and maybe you could roll away with this prize as your own.

It’s with that bit of news that my saga is complete, and Steve’s pitch is out in the air for all who all who wish to partake.

Do with it what you will.

On that note, My computer is turned off, and until Friday, I’ll now return to the sanctuary of my bottomless puddle.