My goodness, but it sure seems like the universe is doling up smackdown after smackdown here lately.

Most recently was detailed yesterday morning in a phone call with Kevin Wilkins during which time he gave me the lowdown on Nebraska honch, CVO; Just as I was picking myself up, and dusting myself off after Leroy’s suicide, I have learned that on Tuesday, CVO succumbed to something called Amyloidosis, and has left us as well.

I don’t know where one’s spirit goes when their body dies, but wherever it is, it’s becoming increasingly chock full of some badass human beings.

Thank you for being one of the good ones, who was true to yourself, and a constant and unflinching supporter of literally everything I’ve done here on this site the last eight years.

Here’s to one day eventually ripping some singletrack and drinking beer with you again; 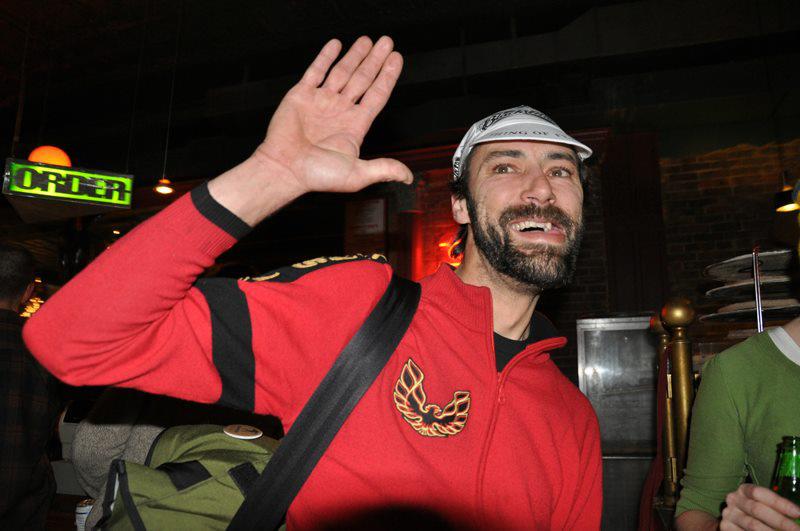 In closing, I’m going to include a piece the aforementioned Kevin wrote, which I think sums up my feelings quite nicely;

It doesn’t seem right, but it happens, and it’s very bad and very stupid and it’s going to happen again.

But weren’t we untouchable?

Weren’t we below the radar enough, behind the scenes enough, unexplainable enough? Didn’t we adequately side step concerns over real jobs, real responsibilities, and real life so convincingly that we earned ourselves a Passover when it came to a disadvantage of this nature?

I know the answer. But in hearing the deep, guttural negative, I’m still looking for a way out of the inevitable, knowing that something as real as death doesn’t apply—shouldn’t apply—to anyone in my circles.

Didn’t I just talk to him the other day? Weren’t we just shredding together a few hours ago, weeks ago, months ago, sharing the silent stupidity of curb cuts, slappies, or the verb “shredding”? Didn’t we just try some dull-witted handshake and laugh it off as our knuckles cracked ineptly? Didn’t he just let me know of his admiration of our mammalian brotherhood, or of my pointless joke, or of my pivot to fakie? Didn’t I just tell him yesterday that he’s one of my favorite people of all time? Didn’t I just tell him?

I just really liked having him around. By around, I mean alive. Knowing that he’s no longer in the area, no longer a couple states over, no longer in contact with those other friends of mine, who I know are taking care of him, is like suddenly knowing nothing. And by nothing, I mean nothing.

But really, though. It’s kind of like, here we are, and then here we’re not.

Maybe as we dodge the bullets between now and then, we shouldn’t only try to remember how things were, but also push deliberately, fall on our hips and taste the bruising, nollie over sidewalk cracks and devour that quarter second, cut our griptape with a rock, not care about it, and live life the way things are immediately.

And by immediately, I mean… You know what I mean.