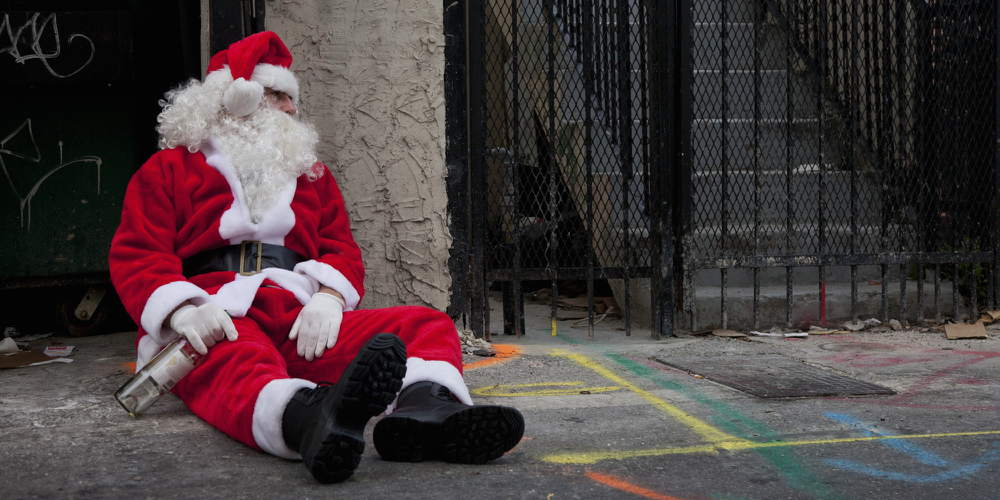 And I’m already kinda over them.

While in LA when my band was playing a show, my bud (our tour guide while in that crazy town) brought us by that haus, Danzig’s old crypt. My guide knew the guy across the street from the little angry man in black who told us thusly:

“One day I came out from my pad to pick up the daily paper and saw a work crew at the end of Danzig’s driveway. I asked what they were doing, and was sure to get shooed away. To my delight, they explained that the guy who owned the old, dilapidated place was paying them to make his gate ‘squeak’ like an old horror movie.”

“After spitting out my coffee and dropping my morning news in the street, I returned to my apartment across the street from our Dark Lord with a plan. I called all my buddies and informed them that there was a party at my place, that very eve (the moon was to be high and bright, very auspicious). My party, was of course, a rager because all my buds and kin knew I lived across the street from Danzig. We took selfies in front of his place constantly, as one does. I turned off the record player and instructed all to come outside and onto my lawn as soon as I saw Glen’s little black sports car come down my street. My friends were bummed as the music, and party, came to a halt. I demanded silence and we all stood out in my grass, as I directed everyone’s buzzed gaze out at Danzig’s house, his car, and him. The man held his remote out above his car and above his head, clicked it and his driveway gate opened. It opened silently, and my friend’s started to get impatient. I shushed them once more and promised that they were in for a treat. Danzig got out of his car, stomped his little black-booted hooves, screaming and cursing up a storm none of us had ever braved before. Of course, our laughing out-roared even his own vicious tantrum! He turned to us an hexed us and our unborn children. Worth it. Someone, and I think you know who, greased up Danzig’s gate nice and slippery and completely silent after the work crew had left. I just knew it’d be worth it, and it was.”

So, naturally I love this story as anybody who has two eyeballs and a brain would, but can anyone recall a variation of this story that was published on How To Avoid The Bummer Life written by Ray ‘On The Back Foot’ Napoles?

Being that Ray and Aaron are of roughly the same age, both had friends in/lived in the immediate area, and both were/are musicians, the degrees of separation in this scenario had to have been about one. Ray was actually the person who’d oiled up the gate, and try as I might, pinning him down to write a revision of the story has proven to be a challenging one.

So there we have it. Some twenty years later the fact, we’ve all circled around here together to once again share in a varying perspective regarding the saga of Glenn Danzig’s squeaky gate.

The world is a wonderful, and whimsical place.

So as to shake out the proverbial sheets here, I have a couple of items I’d like to share. The first of which is a correspondence from Michael of Cockfight Skateboards. Not only is Michael a damn fine skateboarder, but my dude is no stranger to the mountain bikecycle.

That however not what he’s written to us about today. Just as he did last year, he’s reached out with a breakdown of this year’s EZ-7 Turkey Jam ditch party, which looks more or less like so;

What can I say? These years are coming at warp speed these days. It seems like yesterday, the whole city was flooded, now the yearly ditch blowout has come and gone. Fuck!

Anyway, we could not have had better weather for the day. Upper 70s and sunny with no wind. Chamber of Commerce type shit.

The ditch was already buzzing when I got down there at 9:30. Kids were ripping at a level not seen in years past. I’m not sure when everyone got so damn good at skateboarding. This shit used to be hard!

Back to the contest… The young kids have definitely been watching Instagram videos because they were skating like and dressed like all their favorite pros. The 13-under kids could barely kickturn a few years back – now they are kickflipping at speed, power grinding, and doing lip trick combos like never before. We let them skate until they ran out of gas. A kid named Preston held off the others to take the win. My money was on Ryder Lane, but he got hung up on a battle with one trick and just couldn’t let it go.

Then came time for the teenagers. They really killed it! All with power and authority. HEAVY grinds, big bonelesses, tech lip tricks, huge transfers, Just owning the place. Matthew Niemann eeked it out over Calvin Caldwell in race almost too tight to call.

After we regrouped from the kids, it was time for the late teens – 30 somethings to get down. We let them jam, which made it extremely hard on the judges. Heads just swiveling around like dolls trying to catch everything. In the end, pretty much the whole crowd had their minds blown. Seriously, 8 of these dudes would have been pro 8 years ago. It was insane! In the end, local Max Peterson came out on top. I’m pretty sure he never fell and just had the best lines all day.

Hollywood, Zack Castillo and TyRae Carter were up there as well. One noteworthy thing is that Adam Wiggins skated the entire time with a beer in his hand and never dropped it; 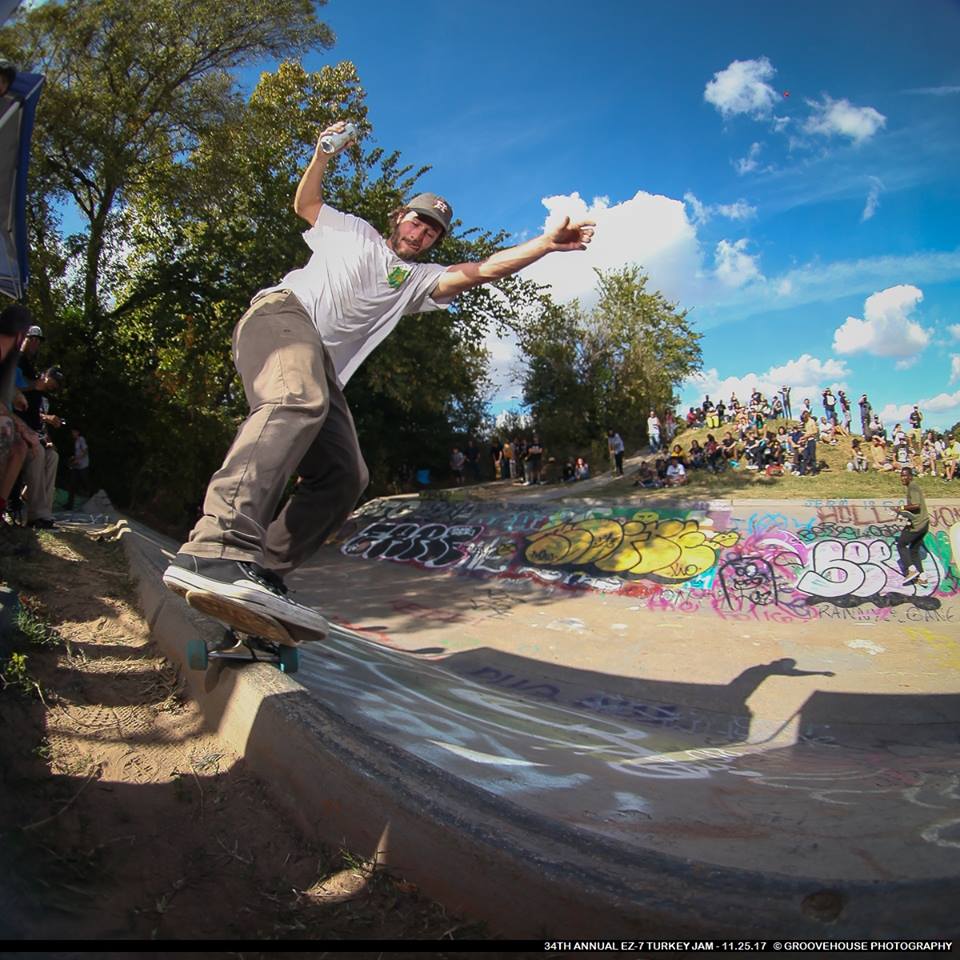 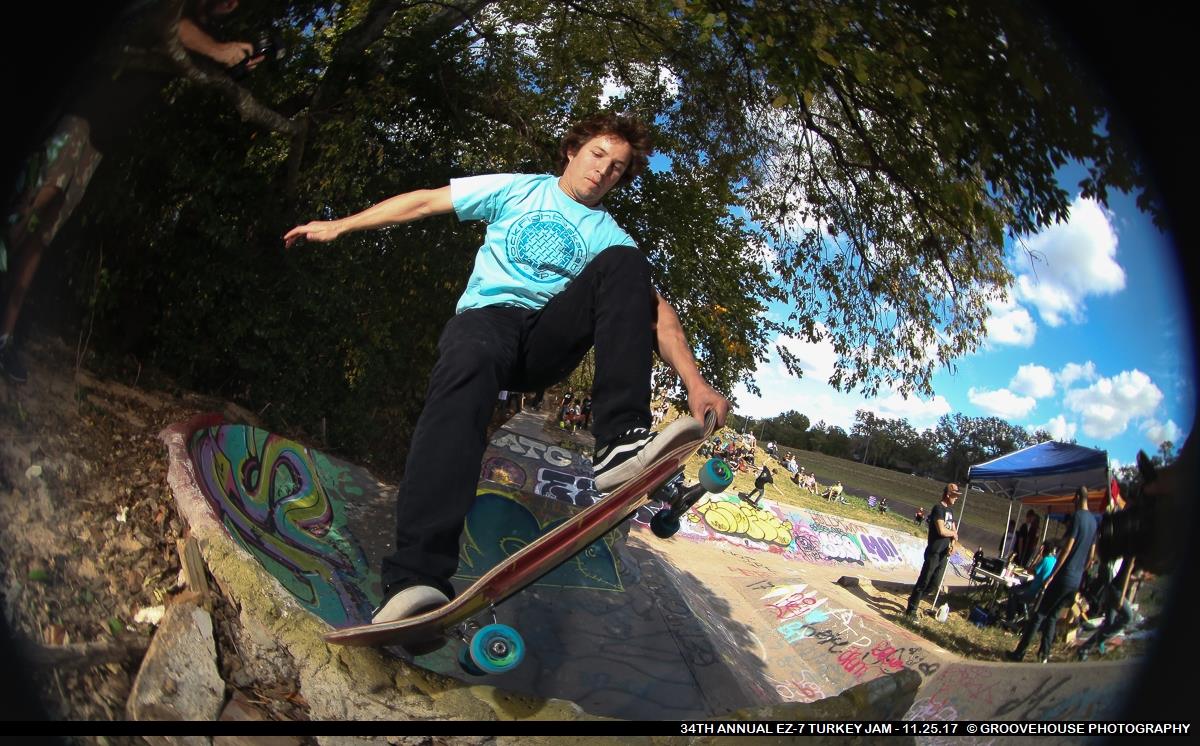 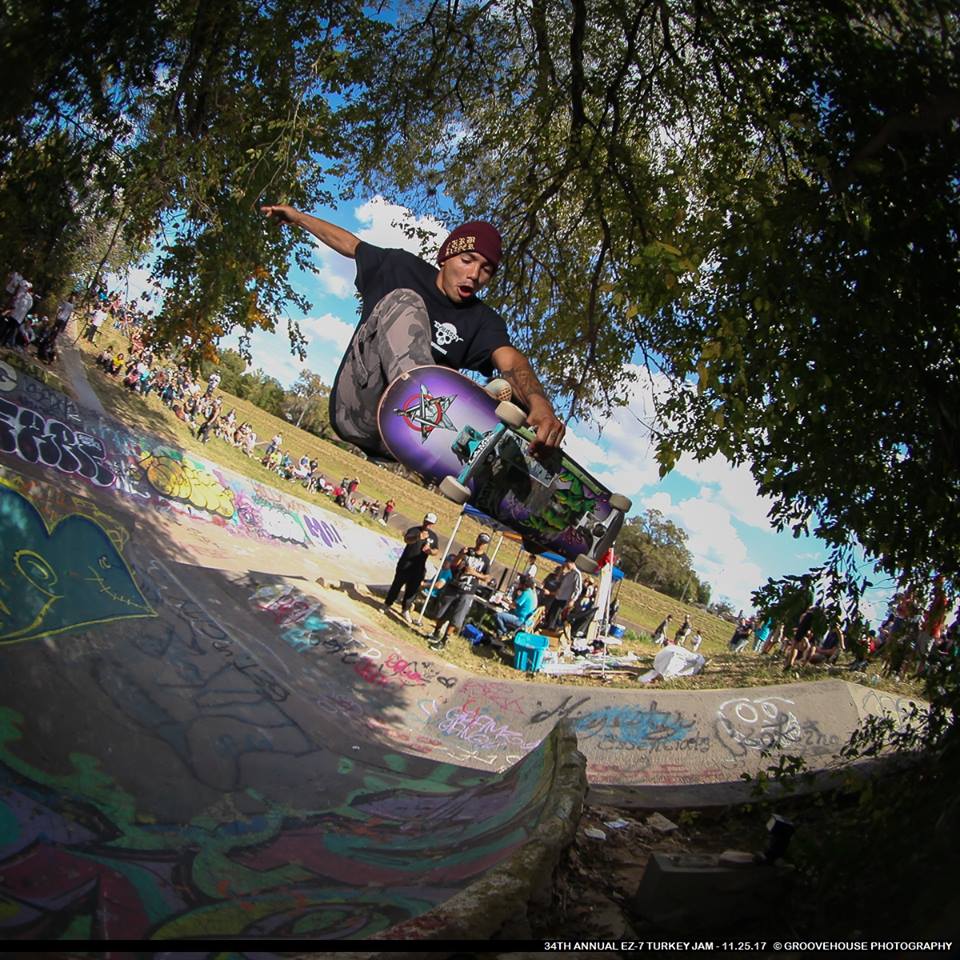 Then it was time for the Old People. The fat old guys are really amusing to ourselves. I’m not sure the crowd cares at all, except to see us fall. All in all, most of us have been skating down there since the 80s. So we do have good lines and knowledge of the place. There just isn’t a ton of flexibility or working knees to go with it; 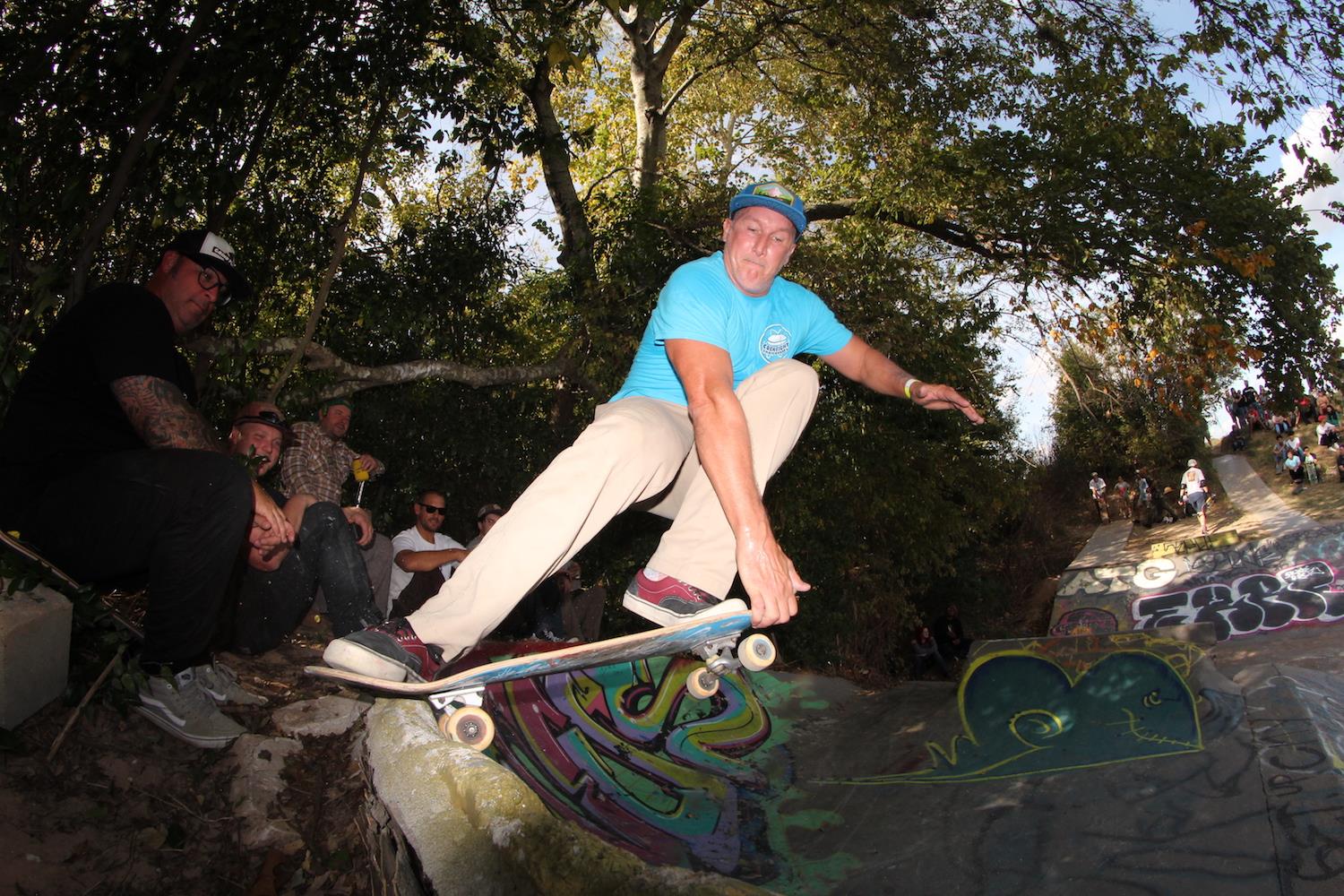 This year we skated to a live band called Warlung. They fucking ripped! We really just kept skating so they would keep playing. It was most of the usual suspects in contention… With a few new faces. Lots of early grabs and powerslides mixed with long grinds and channel rides. The forever young Mike Kelly ended up winning over me and Chris Pena. Everybody really stepped up and skated well.

Joey Specht held off Adam Wiggins and Matt Niemann for the Ace Trucks longest grind. They called a tie with Matt and Joey, but Matt said Joey earned it;

The trophies were handmade parking blocks made by Adam Wiggins. They were the best we’ve ever had. The prize loot was insane too. Nobody really left empty handed. All said and done, we raised about a grand for two really good causes and everyone had a rad time! Thank you so much to all the sponsors and volunteers. Aaron Estrada and Dozer were co-mvps for everything they did to make it all happen.

These sponsors are all rad and should be supported!

I appreciate Michael’s correspondence, and one day I might make it out there to take part in the debacle.

I would also like to say that Adam Wiggins just became my all time favorite skateboarder.

Moving on from that topic to the next, I have a contact from Hurl of Cars-R-Coffins Magazine, out there in Minneapolis, which reads pretty much as it looks here;

hope all is well in the land of the Bronx-style hangovers and 30 days of torpor. Hoping you could remind all the joyous boys & girls that there’s some sweet new shiny things in the CRC web mercantile– and that would make fine stand-ins for the ubiquitous metaphorical lumps of coal that seem to find their way into our collective stockings as of late. Net Neutrality repealed? Huzzah! Serial sexual predator in the White Haüs with no semblance of decorum? You got it. I’m hoping to do some plus-biking over the hollow daze to offset the onslaught of high-calorie ingestion and heavy drinking; Ho-Ho-Ho to you and yours. Get Radler! 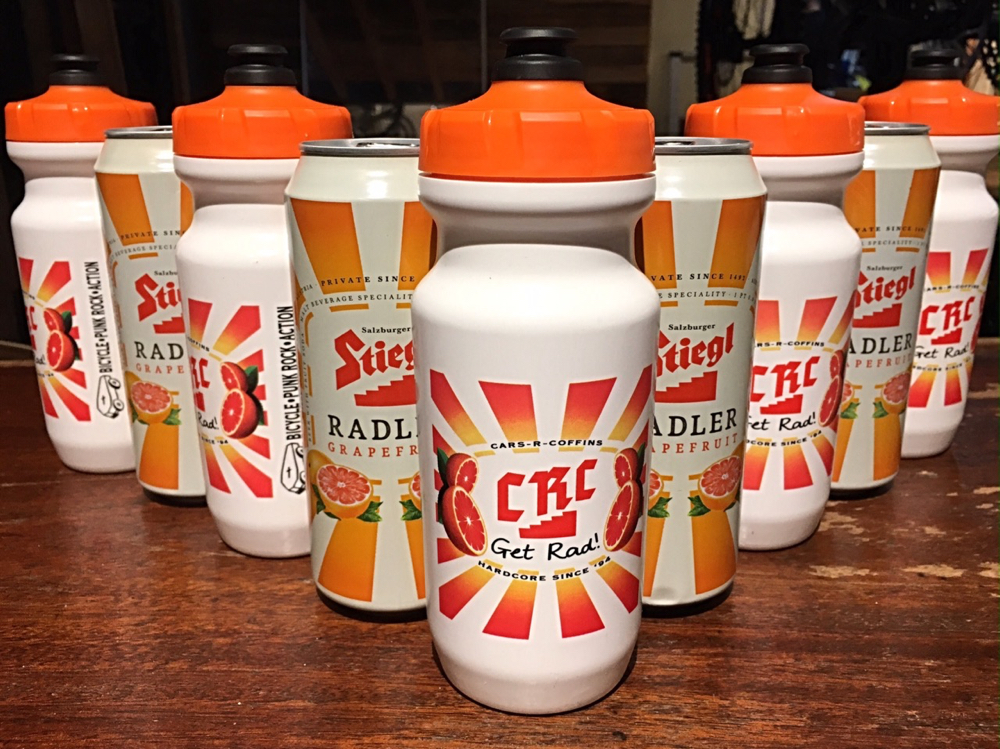 Do you have someone on your life who ambiguously walks the line between naughty and nice?

Well then there you go.

Lastly, and to jump way the hell off track from that, to this, I have a contact that comes from someone in this country’s armed forces. I can’t offer a name, as who they go by is considerably less important as what they have to say;

I have a question/favor to ask, since you’re the famous-est, most social media savviest person I know. (*Editor’s note* This person doesn’t get out much.)

If you feel this gesture and the message are worthy of some distribution, would you mind posting, sending along, tweeting, whatever, in an attempt to get it to a few folks and if really fortunate, maybe even get seen by the folks it’s been intended to appreciate?

I’m saying this anonymously since there are regulations against us supporting any political causes in uniform. And while this theoretically isn’t a political cause, there are some who might view this as an inappropriate action and in a real stretch bring me up on charges for conduct unbecoming. (Although admittedly in my mind, that’s a stretch.) So yeah, this is my attempt to add some support to a cause I believe in, which unfortunately seems to have outlasted the attention span of many in our Country. I was hoping that this might directly refute the position most are using to argue against the demonstrations by showing that some in the military not only don’t take offense, but feel like seeing someone have the freedom to take those actions actually reinforces our importance and sense of accomplishment.

And so, if you think it’s worthy of a pass along in any way, please feel free to do what you do.

So there we have the words straight from our own Anonymous Colonel in the USMC.

Though, as I said, I’m not super down with the holidays, his is the best kind of gift I could have wanted.

2 Responses to “The holidays are already here.”