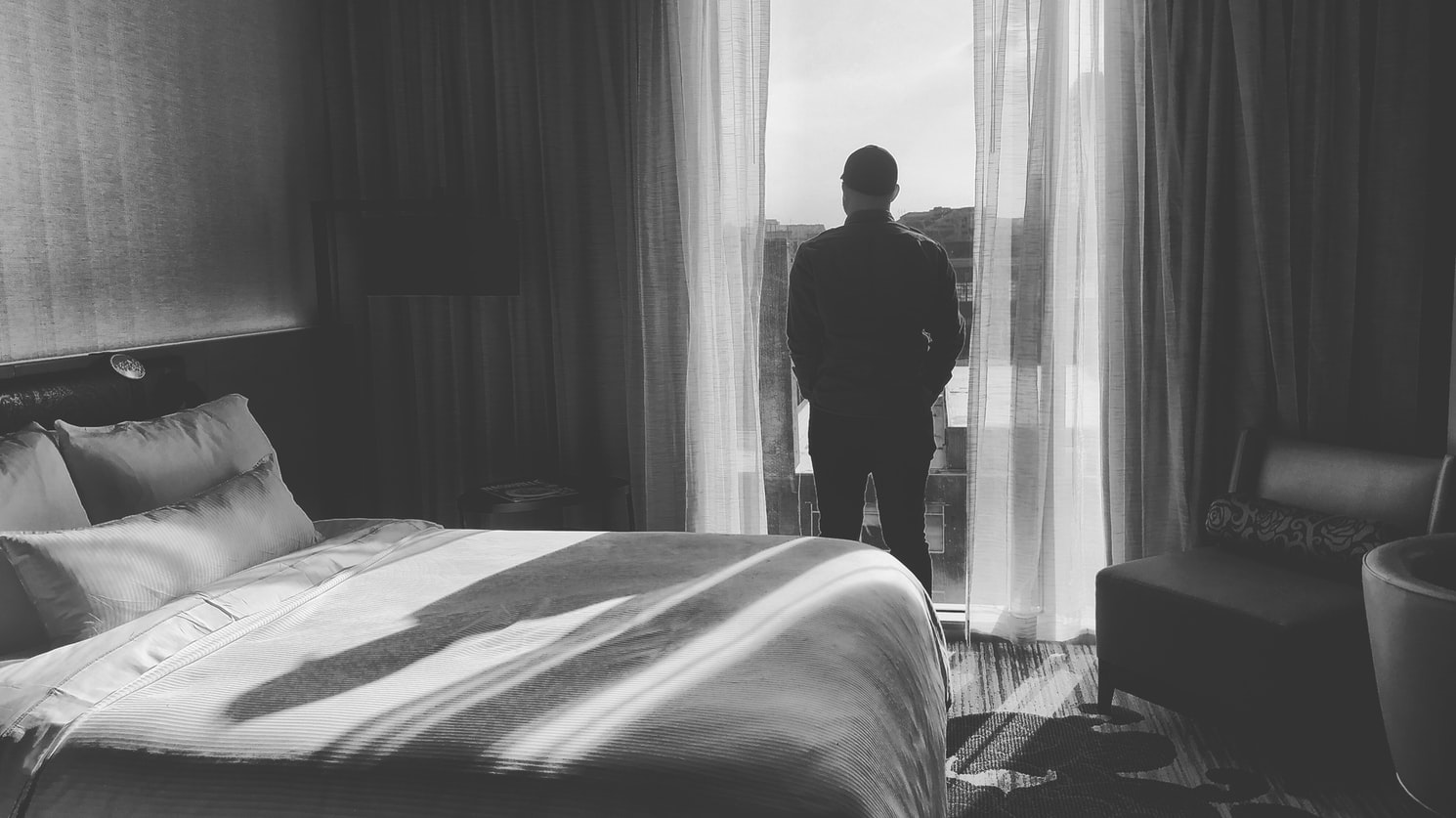 Oh my god, what an utterly insane fever dream of a last week it’s been.

So, I suppose starting off, I should probably point out that literally the entire country is on house arrest for three weeks.

If by chance you think that the idea of isolating yourself from others is dumb, you need to take a hard look at yourself, and then read up on herd health.

I’ll now share a little snippet I found that spoke to me on the matter;

What I find interesting about the Coronavirus pandemic is that a lot of my friends (who are charitable and care about social justice and climate change) are still going to bars/dinners/events.

In Italy, doctors are starting to have to choose who to give ventilators to because of overcrowding and a shortage of resources.To put it mildly, gasping for air, and slowly suffocating is a gruesome way to die.

But what’s happening in Italy doesn’t have to happen here, because we have a very effective tool in our arsenal, which is staying home and not seeing anyone for a little while.

But this only works if we all pitch in, and realize that going out and seeing a lot of friends for fun isn’t cool right now. In fact, it’s quite rude.

Yeah, if you’re under the age of 60 and you get the Corona virus you probably won’t die. But by traveling, going to a bar, or even having some friends over for dinner, there’s a risk that you’ll unknowingly catch the Coronavirus and then unknowingly pass it along to a bunch of people, which will tax our healthcare system and turn this into an Italy kind of situation within a few weeks.

If we all realized going out right now is not cool, then we can solve this problem. But like recycling, or pollution, or climate change, it’s everyone’s responsibility.

When I initially read that yesterday morning, it sounded a lot less like it came out of Cher from Clueless’ mouth; Even still- the point is solid. My immune system is a fortress, and I’ve only been further fortifying it over the course of the last month or two. The same can’t be said for everyone whose paths I might cross. I could be carrying this, and not even know it, but spreading it to others whose immune systems aren’t as bullet proof as my own is the issue.

I’ve been saying that humanity is in serious need of a time out for years, and it looks like we finally got one. It’s my hope that everyone reading these words understands the seriousness of this situation and clips their own wings for a spell. Write a story, make some art, draw a comic, or make a zine. Everyone is always talking about how they’re too busy to tackle this project, or that project. Use this time to be a maker, or a doer, or a helper. I think that’s what they call polishing a turd.

Certainly not to make light of the situation, but I’ve been quarantining myself for over a decade. Three weeks is a walk in the park.

And speaking of walking in parks, there’s some good information regarding staying active in this post that Bicycling recently published; Yeah, I know… AHTBM linking an article from Bicycling? It really is End Times™. It does have a lot of good information in it, though one thing I will mention that is a good thing to keep in mind is that with the hospital system currently stressed out, getting hurt while out and about on a bike ride will be additionally problematic so take extra care to not do such a thing.

Instead of pushing the envelope, perhaps just gingerly press it.

While we’re on the topic of hospitals, and trying to avoid them, I found myself smack dab in the bowels of mine this past Friday after losing consciousness and hitting the deck. It was quite random and I’ve yet to find out what the scoop was, but in the midst of feeling light headed, I sat myself down in a chair, and promptly fell out of it, smashing my head on the concrete beneath me. I came to thirty minutes later with a splitting headache, bathed in total confusion.

I experienced this once in 2018, which I learned was due to an event called ‘vagovasel syncope’. I’ve been in contact with the same neurologist I saw previoulsy, but we’ve yet to conclude what we’re going to do about it. The upshot I reckon is that I need to be better at managing my stress, sticking with the decaf, (if I drink coffee at all), and if I’m feeling light headed, lay down on the floor intentionally, before gravity does the job for me.

Lastly, I have a little bit of art news to share.

A couple of years ago I did a little watercolor painting that was set to be in a show with and curated by Paul Urich; 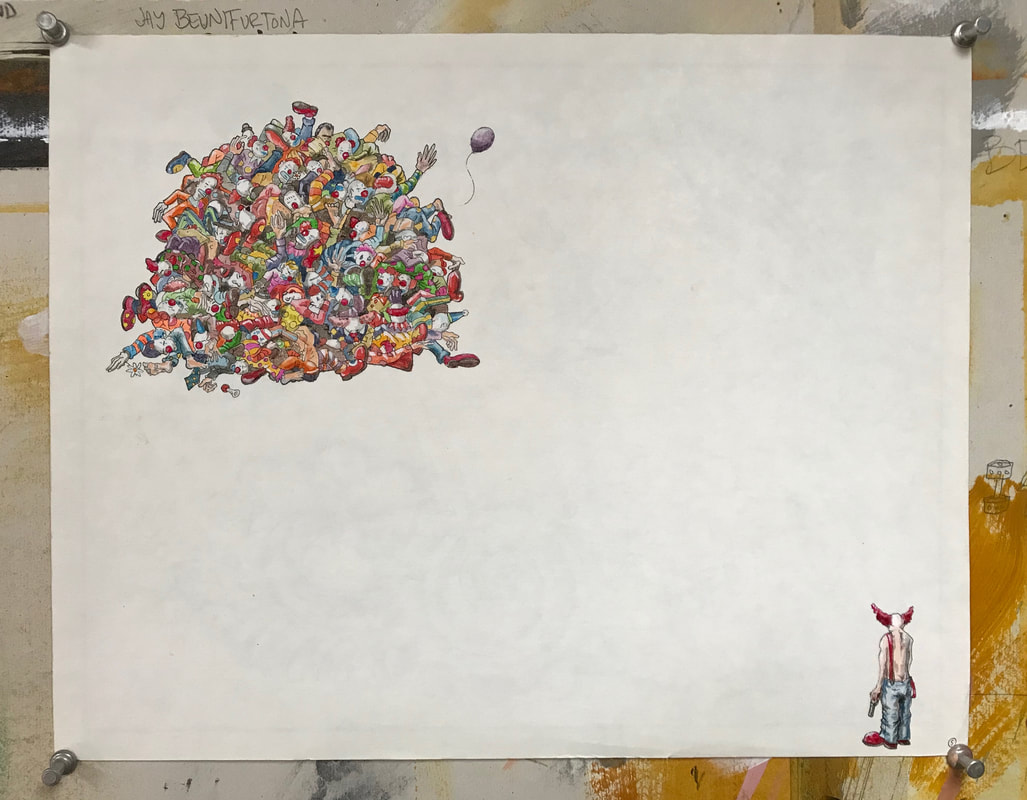 During my big springtime studio purge, I’d thought it had been thrown away. Luckily for me, I apparently stashed it away in the flat file as opposed to the circular one, and pulled it out a few weeks ago with the hopes of getting an edition of prints made.

It was with the help of Candela Fine Art Printing that I banged out a limited edition of archival prints, which are ready to ship now; 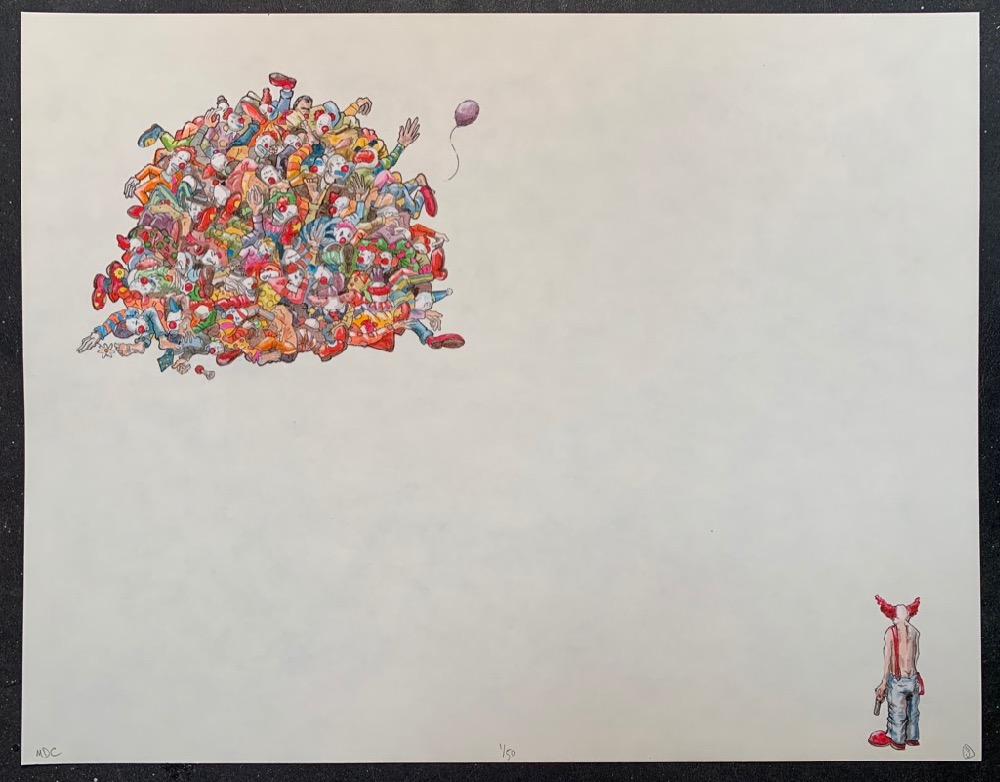 In my opinion, they even look better than the original, but what do I know?

I hear PayPal is acting a little wonky currently (I have my people on it) but if you’d like one, I have a short stack left, and will happily brave a trip to the mail box.

If we’re gonna be on house arrest for a month, we might was well decorate the fever dream whimsically.

5 Responses to “A party of shut-ins.”