Some days you’re your own worst enemy, and can’t get out of your own way, you know? I don’t mean this in the way that scumbag racists Jason Wood, Lisa Alexander, Michael Lofthouse, or any of the other nimrod shitheels who are roadblocked by their own ignorance, and white-hot insecurities are. I mean by uncertainty, and perhaps an inability to allow the universe to send you on the course it has destined for you.

Anyone who’s spent any amount of time here over the course of the last year has perhaps been witness to my own journey of self exploration, while in the terrors of re-imagining my life from the ground up, as I’ve struggled with nearly every minute of it. I’ve described my process through it all being like that of a TV that overheats and periodically shuts off, only then allowing itself a bit of a reset. The reset is all well and good for a span of time until it gets overheated resulting once again in a shut down, a reset and so on. The last few weeks I’ve been wholly immersed in this cycle leaving me to wonder if after all of the work, travel, therapy, self reflection, etc. whether I’ve made any growth or forward advancement whatsoever. This leads to frustration, a renewed sadness, more fear, and ultimately a paralyzation, and inability to make any forward movement. Coupled with cortisol-induced lack of sleep resulting in a mania that can only be described as blinding. I wouldn’t wish this on my own worst enemy, and I can only hope I’ll eventually be granted a reprieve.

Trust that the universe and your guides will help you find where you’re supposed to be. Don’t succumb to the voices in your head, especially if your voice is as big an assholes as mine, and for the love of God be nice to yourself. It’s not a bad mantra… Now if I could just actually apply it.

In an effort to be nicer to myself and not spread my energies so thin, it was about a year and a half ago when I pared down the site a bit and went about posting twice a week. Then when I left town, I went to one day a week, because I wasn’t quite sure when I’d actually be around connectivity long enough to publish our regular missives. But apparently it takes a bit more than that, especially (again, if you’re anything at all like me) when you have a history of abject abuse by your own hands. I realize that this is a process in which I’ll be engaged for the rest of my life, so I don’t expect any fast answers, but for fuck’s sake- Would it be too much to ask for at least a couple? Being alive is really goddamned hard, and none of us have a guarantee that being dead is any easier, so it’s like walking the line between having a shitty job and not wanting to be unemployed. Maybe the trick is to make your shitty job as beneficial to you as possible… Do you get to steal all the office supplies you desire? Do they provide bagels every morning? Do you basically get to do whatever you want and still get paid twice a month? I’m clearly no life coach, but at this stage, this is the best analogy I can conjure.

For now and until I become wiser, the best I can say on the topic of taking care of one’s self to any degree is a thing I first posted on the IGs a year ago, but will again here just as a reminder to myself, or anyone who needs it; A week after this cat took his exit, (and a year after Leroy traveled the identical road) I found myself sitting in my studio, very calmly justifying the same strategy. My family, wife, and friends would all gracefully move on, I was convinced. Though I didn’t know him, nor did I have any more invested in his existence than any other person I’ve never met, his departure colored my reality in an especially peculiar way. In the time since, I’ve only spoken with a small smattering of people about that evening. It was less a cry for help, and more the arrival at the fork in one of many of life’s roads. Anthony went left, and I decided to go right. And this is the thing I think people who’ve never before found themselves at this juncture don’t wholly understand. Just because that fork is behind you, doesn’t mean you won’t arrive at another somewhere down the line. As a matter of fact, chances are better than good that you will. I’m not writing these words to implore people to seek the help of others, or to say that there are people who love you. No shit. This is to say that if you’re in the throes of that intersection, just wait. Wait a day, a minute, or even a breath. I’m still reeling from Leroy’s suicide, and though I may hate myself on some days, I love those around me enough to never want to put them through what I assuredly will never get past. Life is precious, call a hotline, blablabla. Just honor yourself, and the storms in your head even briefly enough to at least see the sun come up tomorrow.

I heed my own advice daily. Also, and though it’s unrelated, if any of you have seen my passport recently, please let me know where I left it.

Thank you for the opportunity to vent, and let us now get on with the show.

First up let’s engage with a bit of art that doesn’t suck that was recently submitted by James, what read like so; 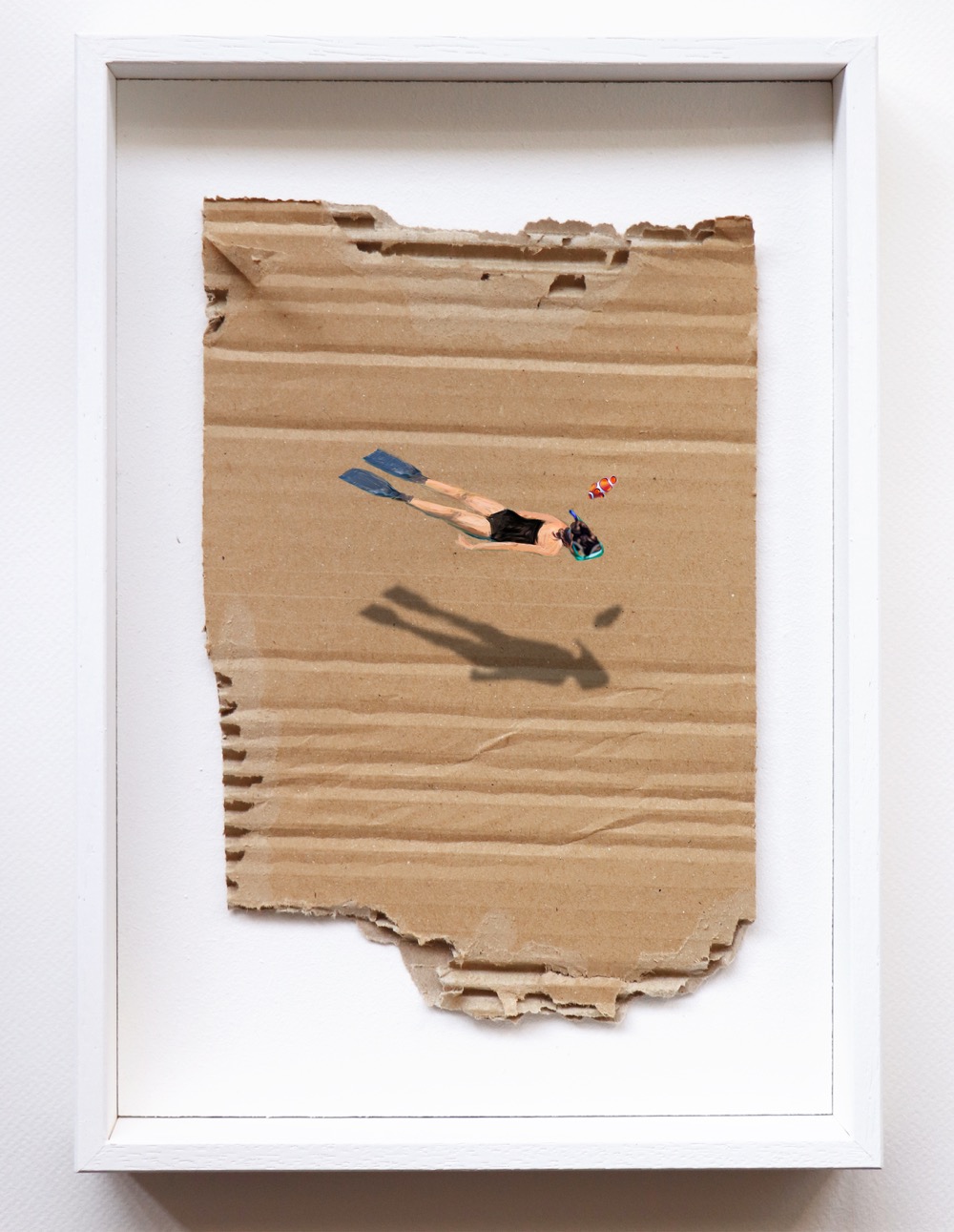 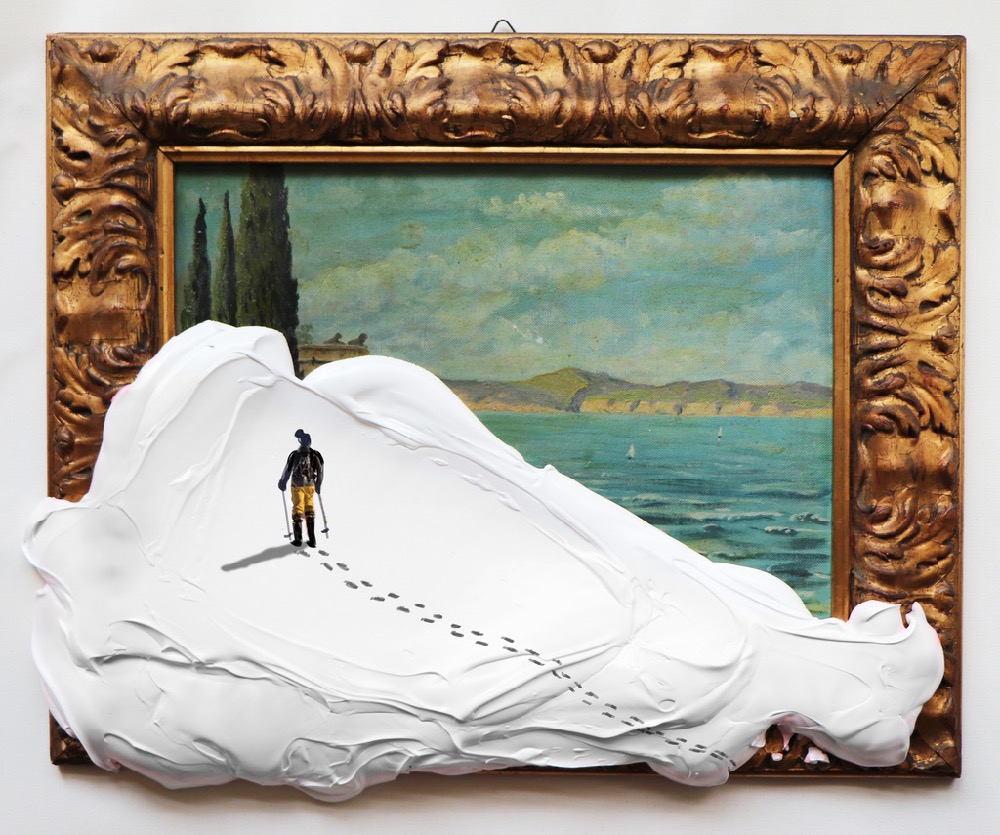 I came across a picture of one of her cardboard paintings and it had echoes of your clown drawings, so thought I’d look her up and pass it along to you.

Hope you have a wonderful weekend full of leisurely pursuits involving a golden ratio of bike, kerb and keg.

James was right. I do like those little paintings, and they inspired to to carve out a little bit of time between bouts of absolute mania to spend some time in the studio ASAP.

Before I get the hell out of here to do just that, I feel compelled to circle around to this post where I notified you of Bend, Oregon’s first annual Hotdog Hill Climb. Thankfully, Barry was receptive to some encouraging haranguing I sent him so as to get a write up.

Before we get to that though, I also think it’s important to include a photo of him from one of the original races I put on in Santa Cruz way back, as the kids say, in the day that I feared lost until only just yesterday; This of course is Barry in slightly younger days (though he doesn’t really age, so what difference doe that make?) mouthing an entire can of beer as he prepared to make his shot, before utterly annihilating all comers in the cross country race portion of our event.

Anyway, from the mouth himself I got the following scoop;

Here is the report from the Hella Sweet Hotdog Hill Climb Challenge.

Upon pre-riding the course the day before the event it was determined that the hella sweet hotdog hillclimb challenge would be extremely challenging. So we had that going for us, which was nice.

The riders went off at 3 minute intervals. They were handed a hotdog when their time started, and were instructed to carry it to the top of the hill and into the hotdog eating arena and then eat the hot dog. One’s time would stop once the entirety of the dog was consumed.

People seemed to like doing it. There was a fair amount of hot dog debris on the trail, many rocks were ingested, many beers drunk, and distanced air high fives slapped; 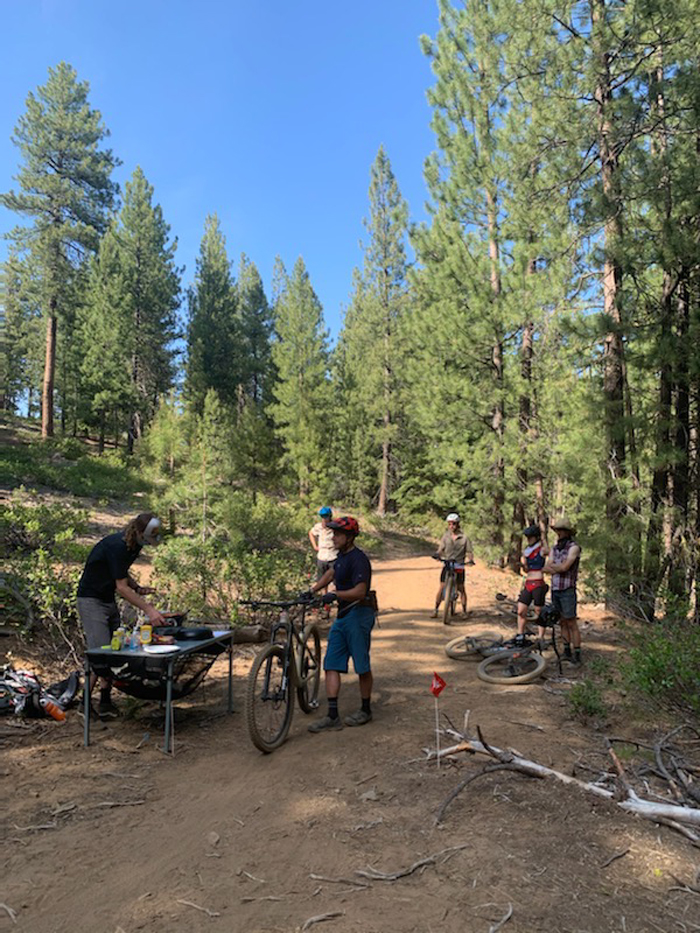 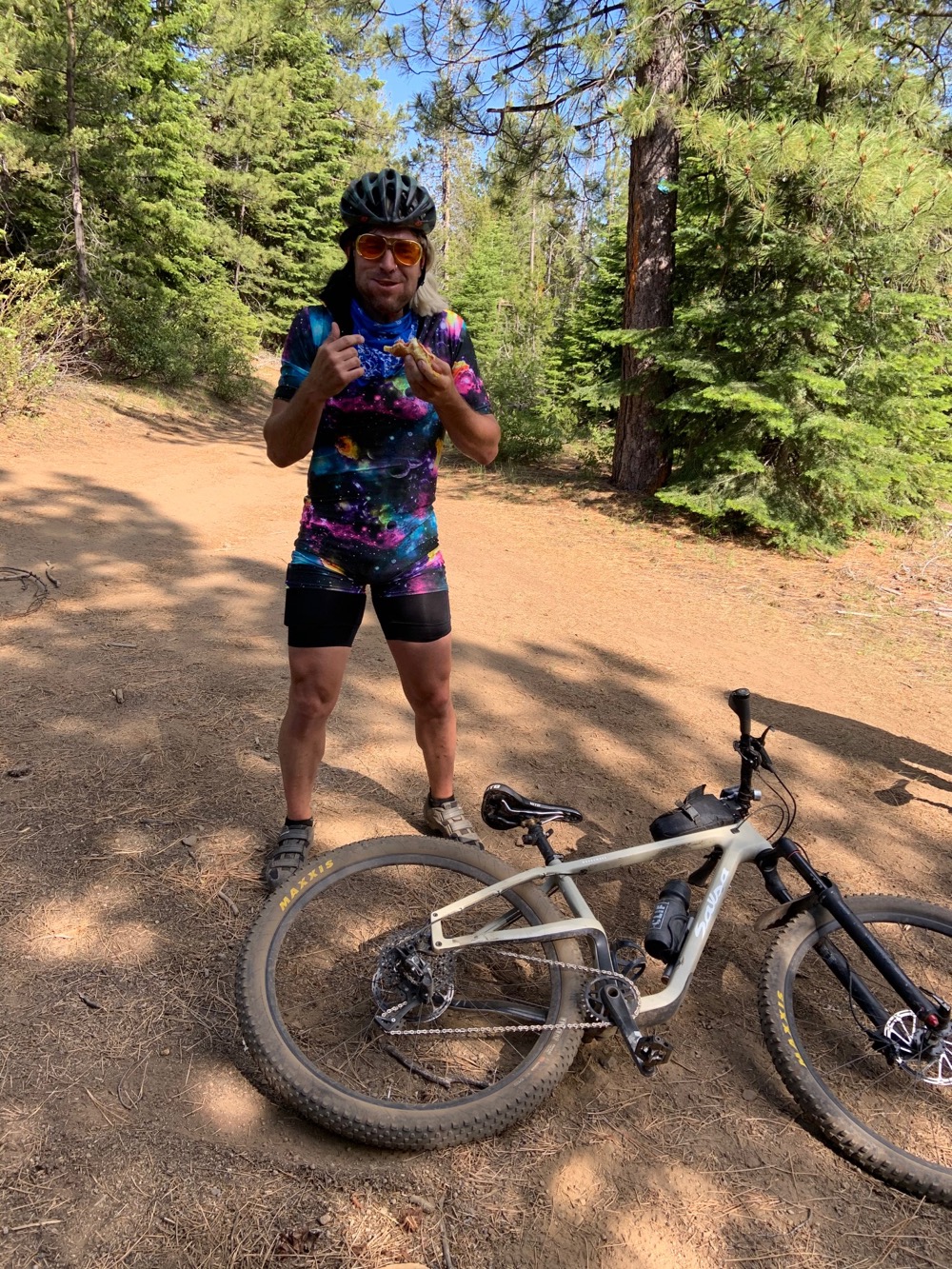 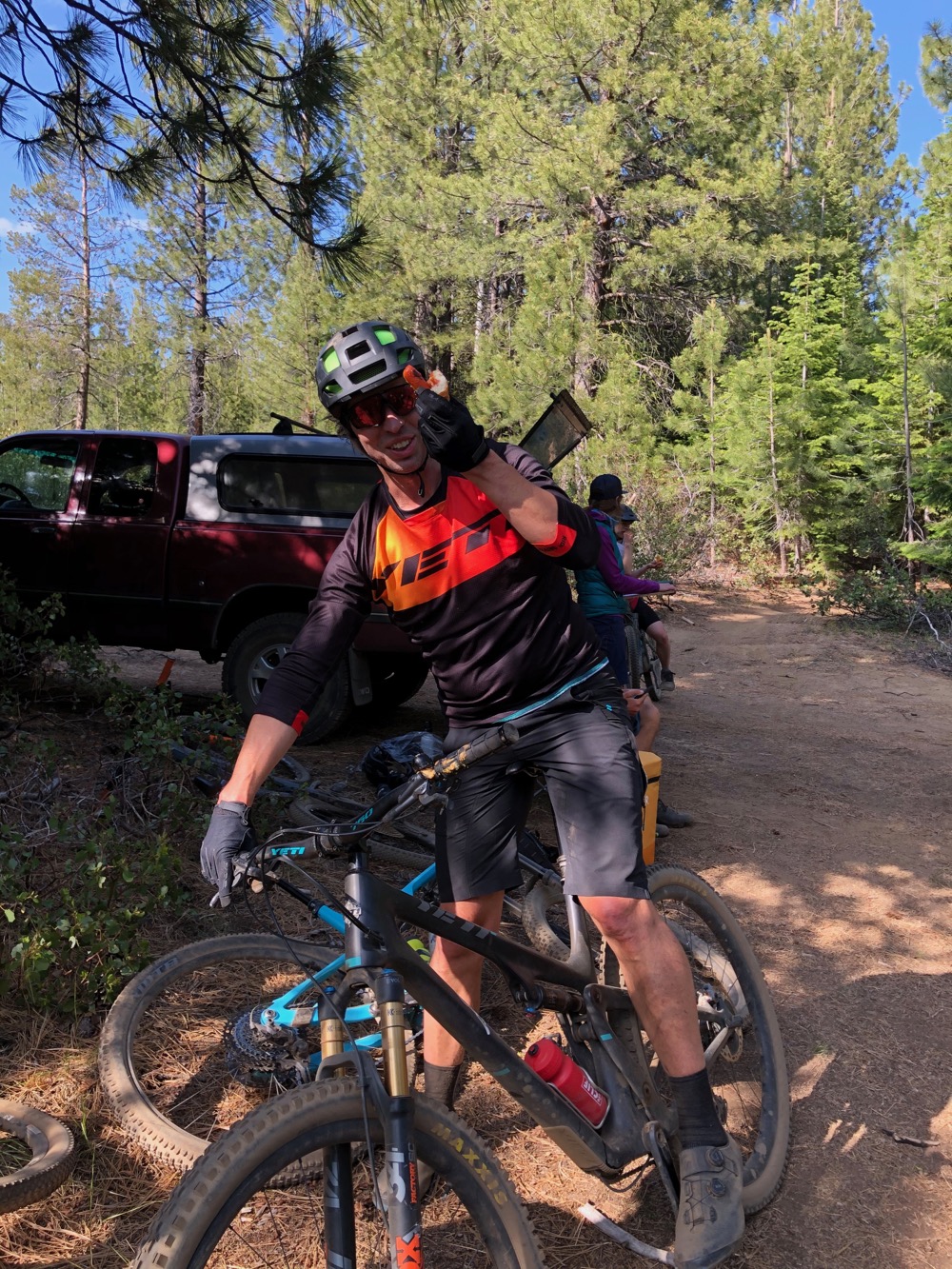 The Our Saint of the Immaculate Hotdog title went to local heartthrob and backcountry yurt operator, Zeehandelaar, who, despite the fact he was provided a penalty jumbo size hotdog just for showing up, still managed to arrive to the summit with every piece of relish still perched stoically atop his dog. Crowd vote bestowed him with a 4 minute time bonus that was enough to catapult him onto the top step.

Women’s Champion Baroness Van Weiner complained the next day of a malfunctioning dropper seatpost due to the volume of cheese whiz stuck in it, but wowed everyone at the Challenge by posting the third fastest time overall and beating all manner of spandex clad, tire pressure talking, dorks.

If I was technologically more inclined all the attached photos would be pre-organized with circles and arrows and a paragraph on the back explaining what each one was to be used as evidence against us, but that is beyond my email capabilities, so I present you with this smorgasboard of visually appealing images to peruse at your leisure, as well as the white-hot results.

This right here is proof that every so often, all one needs to stay out of their own way is a hotdog and a little bit of dirt.

9 Responses to “Trying and trying.”