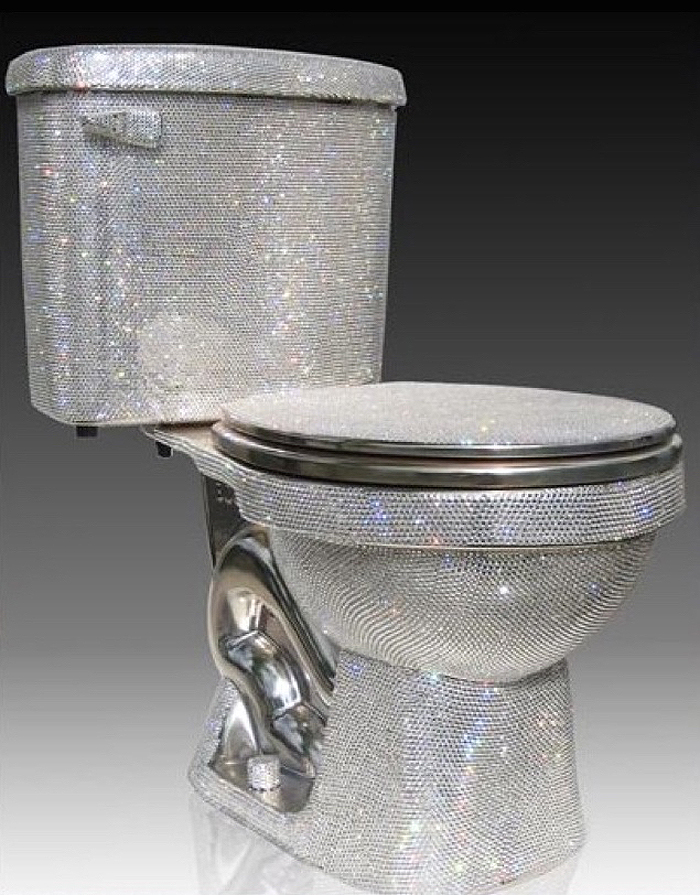 Today we have a double dose of the most nonsensical sort, so buckle up, butter cups. Things are about to get non-sequitur-ie up in this piece.

Firstly, I guess I should be excited to announce that this thing is ambling back to Portland this coming December; 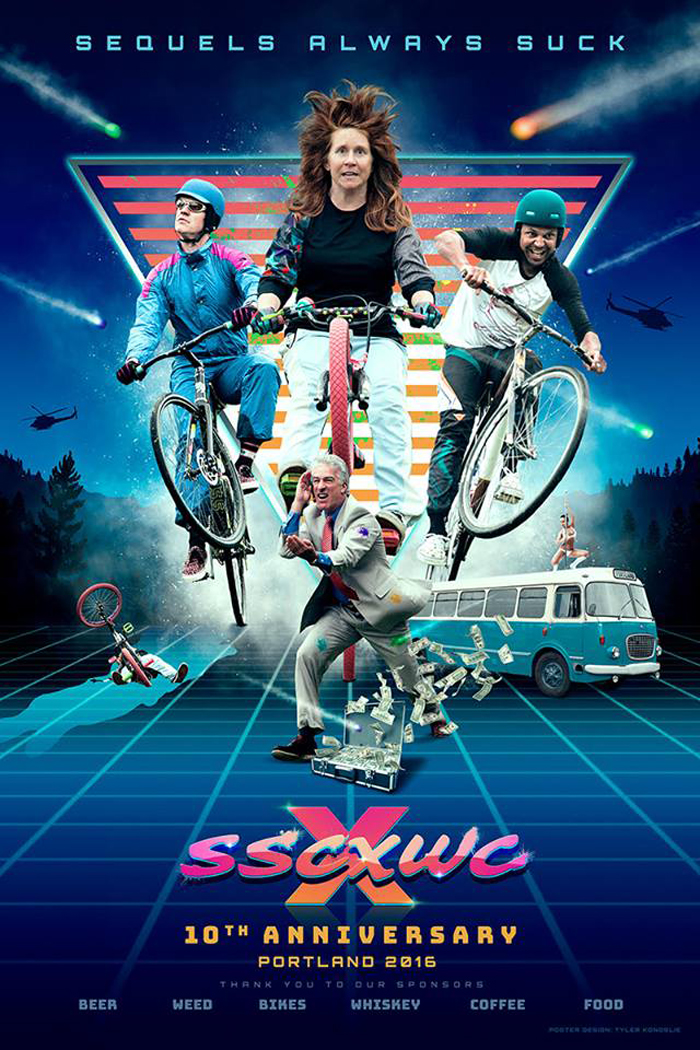 I wished I’d gone to the first one, so I went to the second, third and fifth one, and I haven’t been back since.

This year’s promises to be a total fiasco, and based on the intel I’ve received thus far, a fiasco it will be.

I will most likely not register, and will go on to poach the race, or not, assuming I can get to Portland in the first place, because when the going gets tough, the tough get lazy.

Isn’t that how the saying goes?

Anyway, mark your calendars, and dust off your cleats, because the race will almost probably assuredly possibly maybe never be in its birth place again.

Unrelated to that, I would like to direct your attention to the following video that was just released by the good folks from Park Tools that shines a much deserved spotlight on the unsinkable Andrea Smith;

I loved seeing this, because try as I have in the past to keep women out of cycling, I long ago learned that it was better to raise the white flag of defeat and welcome them in with open arms.

Because of her chops, commitment, and all-around badness, Andrea is a fine candidate for today’s hero of the day.

Unrelated to that, beyond simply dipping into the archives, as we go even further back I present the first ever post here on All Hail The Black Market, (minus a couple of video clips that have gone missing), which by my estimations, as of tomorrow, marks six years, six months, and six days of preaching nonsense from this electronic pulpit.

August 24th, 2009? Is that right? I maybe just redid my math and am thinking that was last year…

Whatever the case, I will celebrate with an email and this video sent on from Chad that besides world peace, and the health of a 20 year old me, is everything I could have ever wanted for today;

These dudes are putting their party hats back on after forgetting where they left them for 10 years;

Enjoy, or don’t. That’s your business.

The only two recommendations I have for that video are to go full screen, and turn the volume knob to twelve and then break it off.

I have it written in a living will that upon my demise I am to be dipped in liquid nitrogen, and then fired from a cannon into the side of a strip club while Graveyard’s ‘Ain’t Fit To Live Here’ is played loudly through stacks.

After hearing ‘Hang Up The Spurs‘, I might have to make an amendment to said document.

And speaking of dying, but not really, but kinda- Last week Pamela Palma and I were dorking around a local park in order for her to get a shot for the aforementioned upcoming PBR art show I’ve been jibber jabbing about. Anyway, it was at that time when she snapped off the following shot; 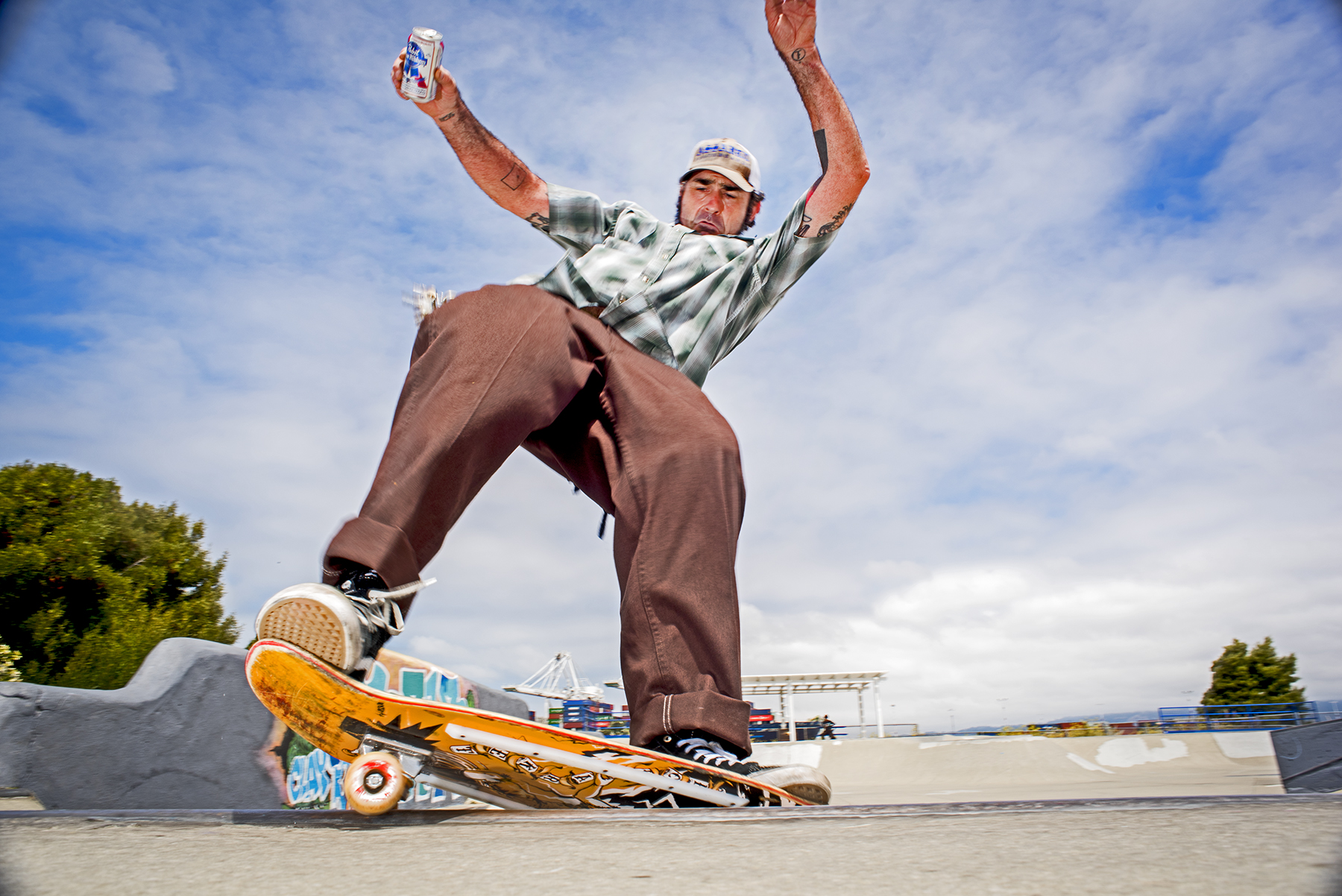 I don’t alway frown when I throw out a little frontside, but when I do, I do in a cartoon-ie way.

Finally, it’s appropriate that I close today’s post with a correspondence from Paul of Atomic Cycles regarding some highjinx he’s got cooking in right around three week’s time;

What: The Fire Road Cruise is just that a “cruise” on streets and fire roads. The mileages is long, the pace even not too fast, the views are great. How much fun you have is up to you. Any kind of bike is welcome, we will be hitting some hills and some dirt, most people will be riding a BMX styled cruiser, klunker, vintage mtb or other bike but we don’t care what you bring as along as you show up ready to have fun!!! 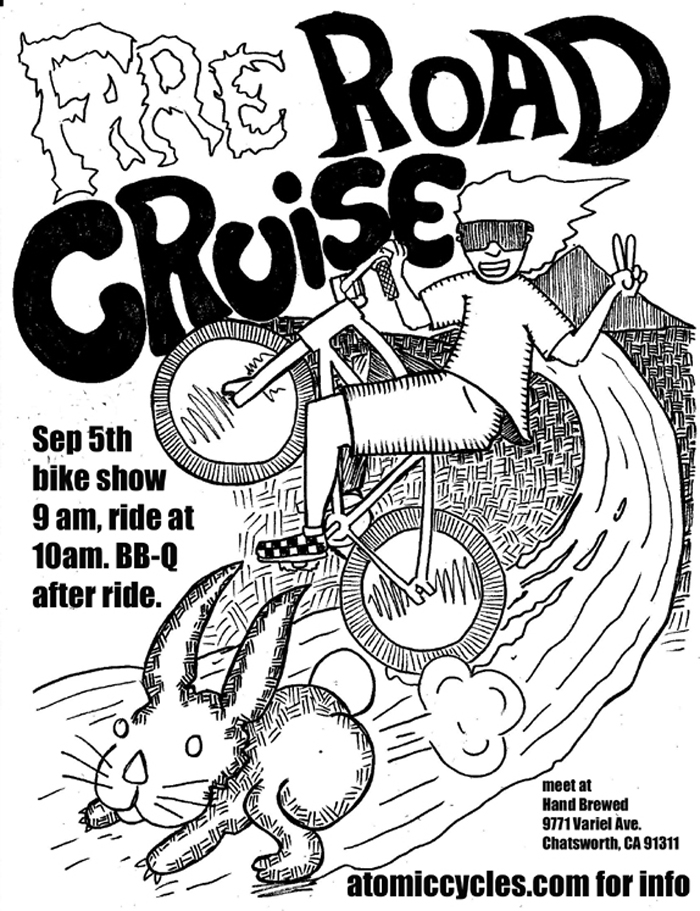 Before the ride we will be having a bike show, one entry per person with a people’s vote for best of show. Voting begins at 9am so get your bike there by 8:30 am no later. It is supposed to be fun.

After we do the show we do the ride, we will have route maps and stop once for a small amount of time for restroom and water refill.

Bring stuff to fix a flat and some water. Tune your bike up beforehand.

Finishers will get a button, quitters will not.

When: September 5th 8am gather, 9am show 10 am roll Yes it is a Holiday on a Monday.

See you then!!! Please spread it around to your peeps!!

Paul is a good egg and consistently brings he noise in a fashion that only he can.

And it’s with that, I declare that if all of this presented right here isn’t enough to clog up your diamond encrusted expulsatorium, then I can be of no more help.