At the tail end of a weekend so jam packed full of hi-jinx it would make a lesser man succumb to illness, I’ve donned the hat of a lesser man, and succumbed to illness.

Such is the price when galavanting around in an attempt at adding a slightly greater percentage of fun to the world.

Something that Blue Steel here, and his homie Sergio could probably use a dose of about now;

Anyhoo, I’m still anxiously awaiting a response from Sergio, and until I can find one, have picked my side with the conception of a new shirt; I realize this has made the rounds at least several times by now, (or as the kids say ‘gone viral‘), because when a videographer catches a crybaby do stupid shit, that’s what happens. Just the same, I figured I’d put it here and add my own cent and a half to it, primarily because as far as I’m concerned, that’s about all a prima donna spoil sport cat 5 is worth.

Just for fun, and because I don’t trust anyone who has to wait until they have an audience to have a tantrum, here is a photo of Jaw Chiselton stuffing his handsome face into the wall; 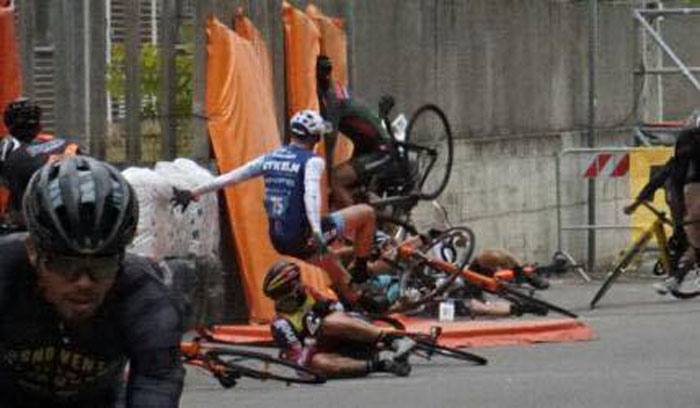 And here’s what I imagine it looked like from the other side; 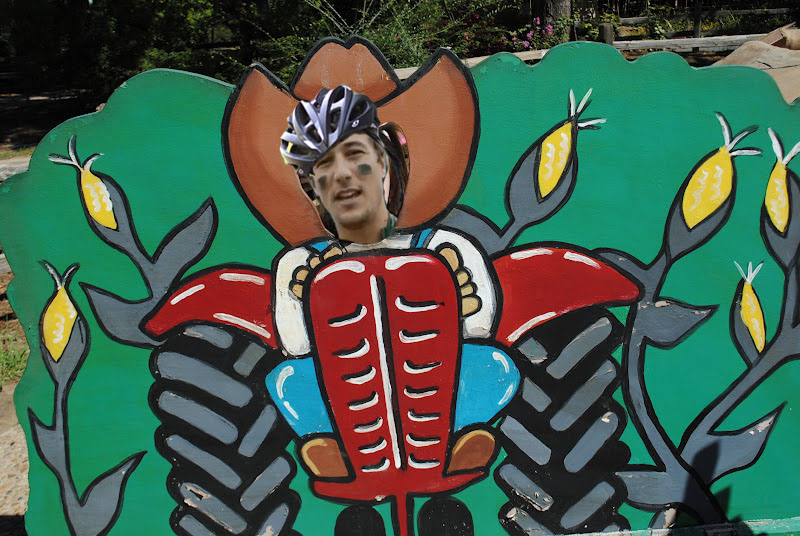 Squirrels will be squirrels, and no amount of hair gel and weird random smears of eye makeup will change that.

But back to actual real-live actual fun things, last week former/current Blockhead Skateboard pro, and current boss man at Manifesto Bicycles Sam Cunningham, sent me a text noting that Sunday would see a birthday BBQ and slappy session honoring local honch Kevin Torrey, which I made my way to with haste; 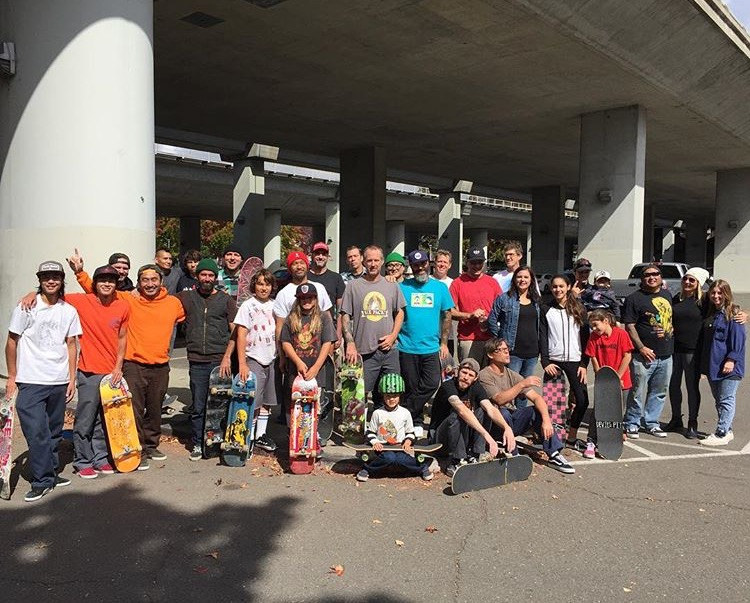 It was there I slapped hands with new friends as well as old, and we got down to giving the curbs a little what for; 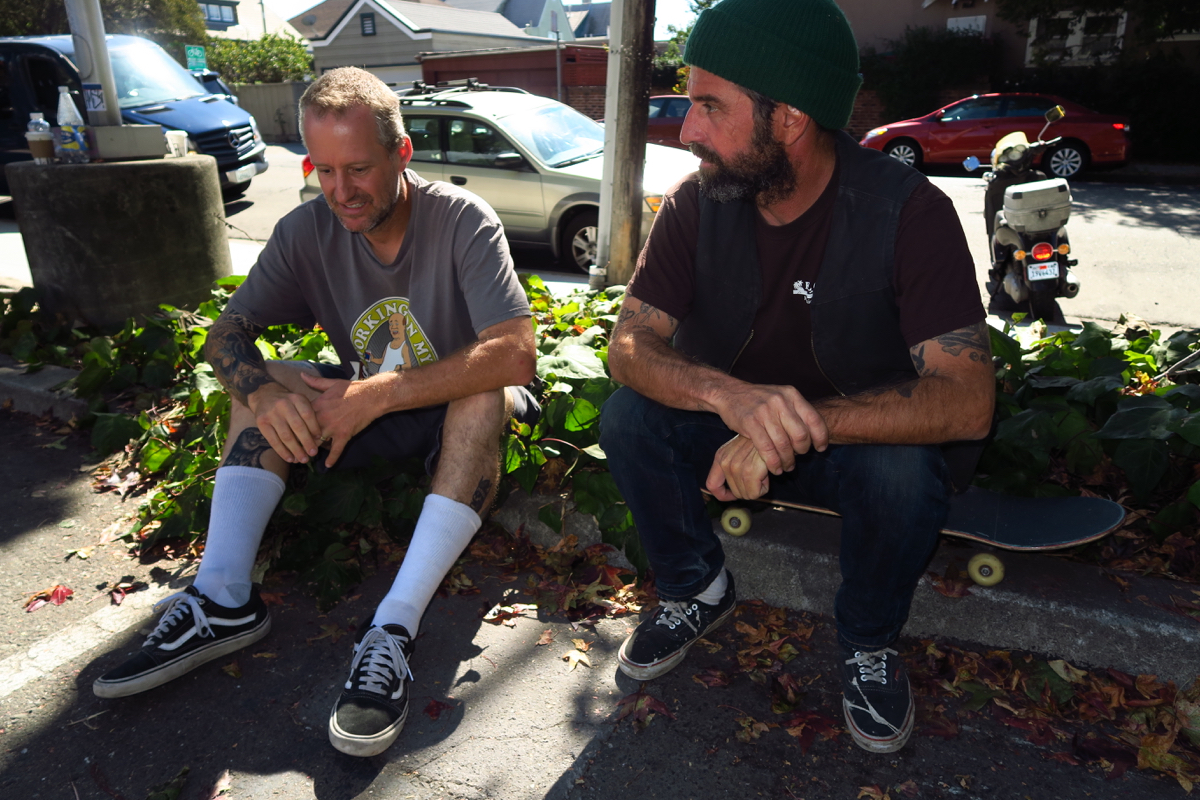 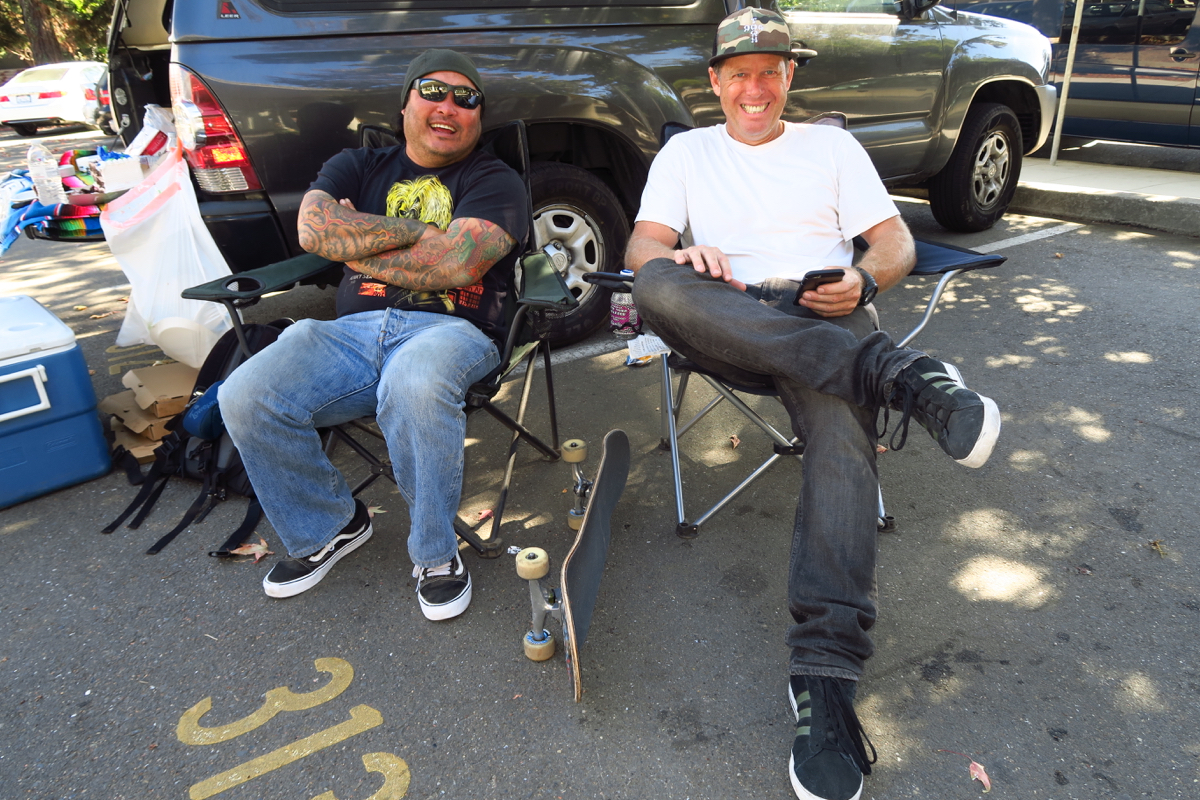 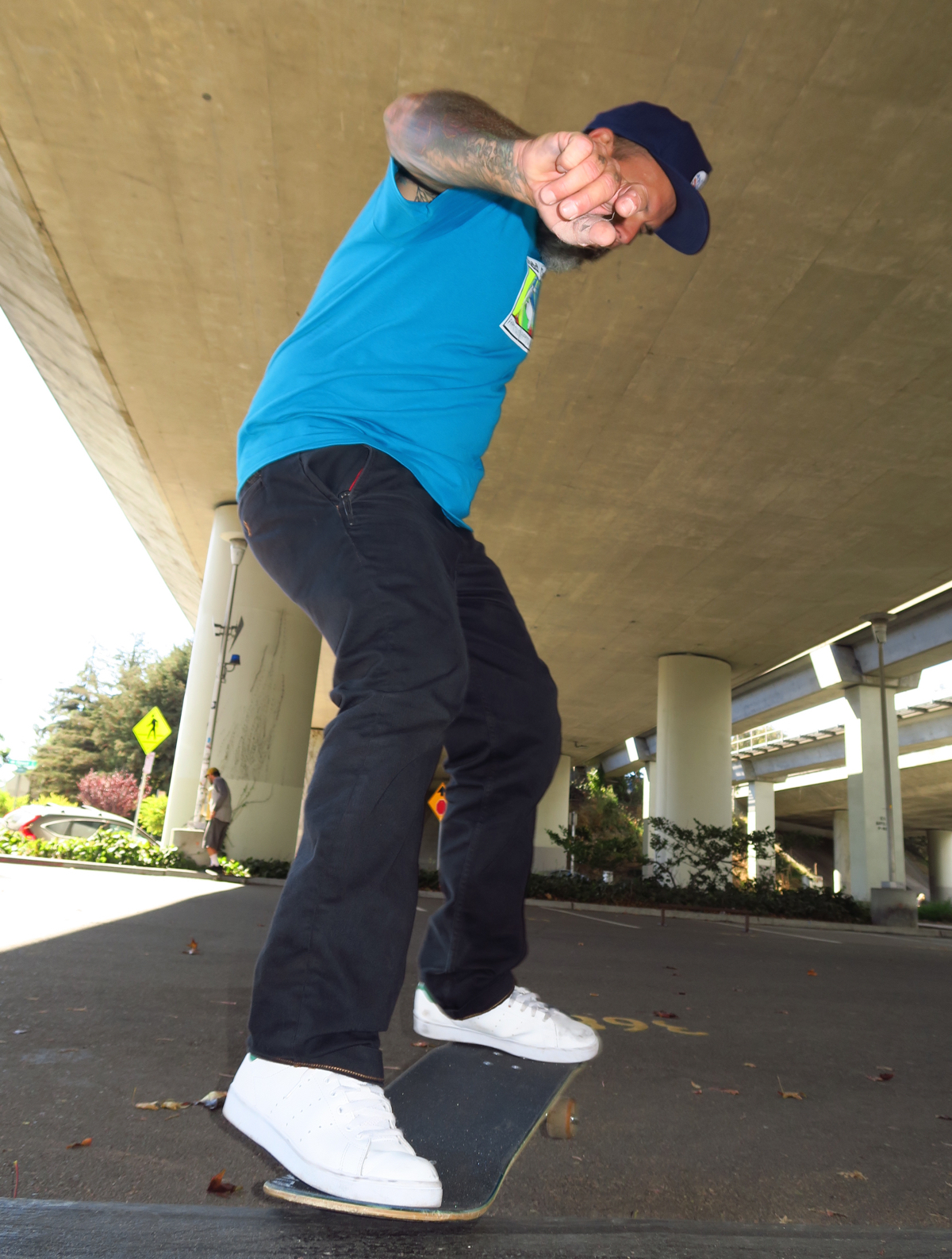 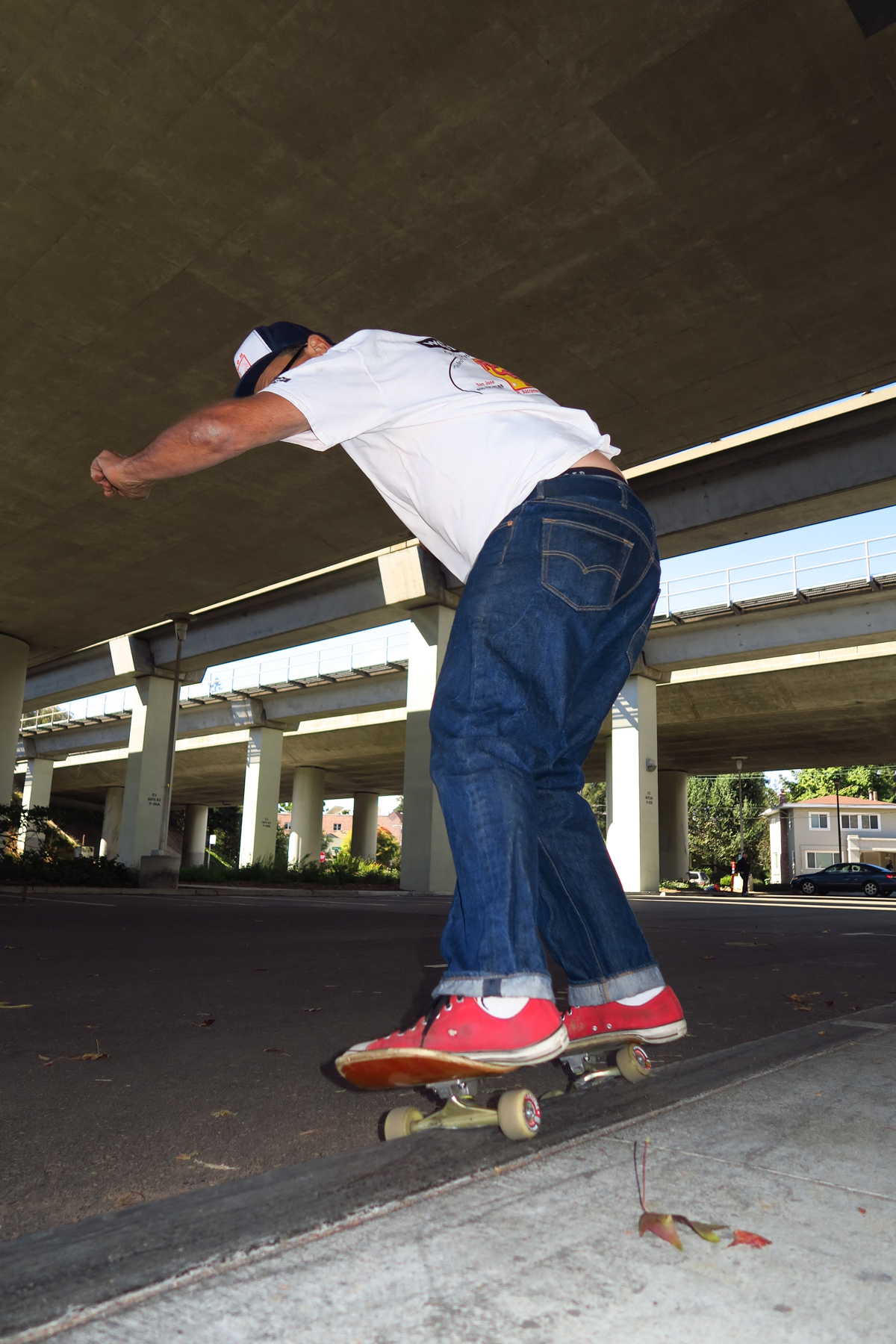 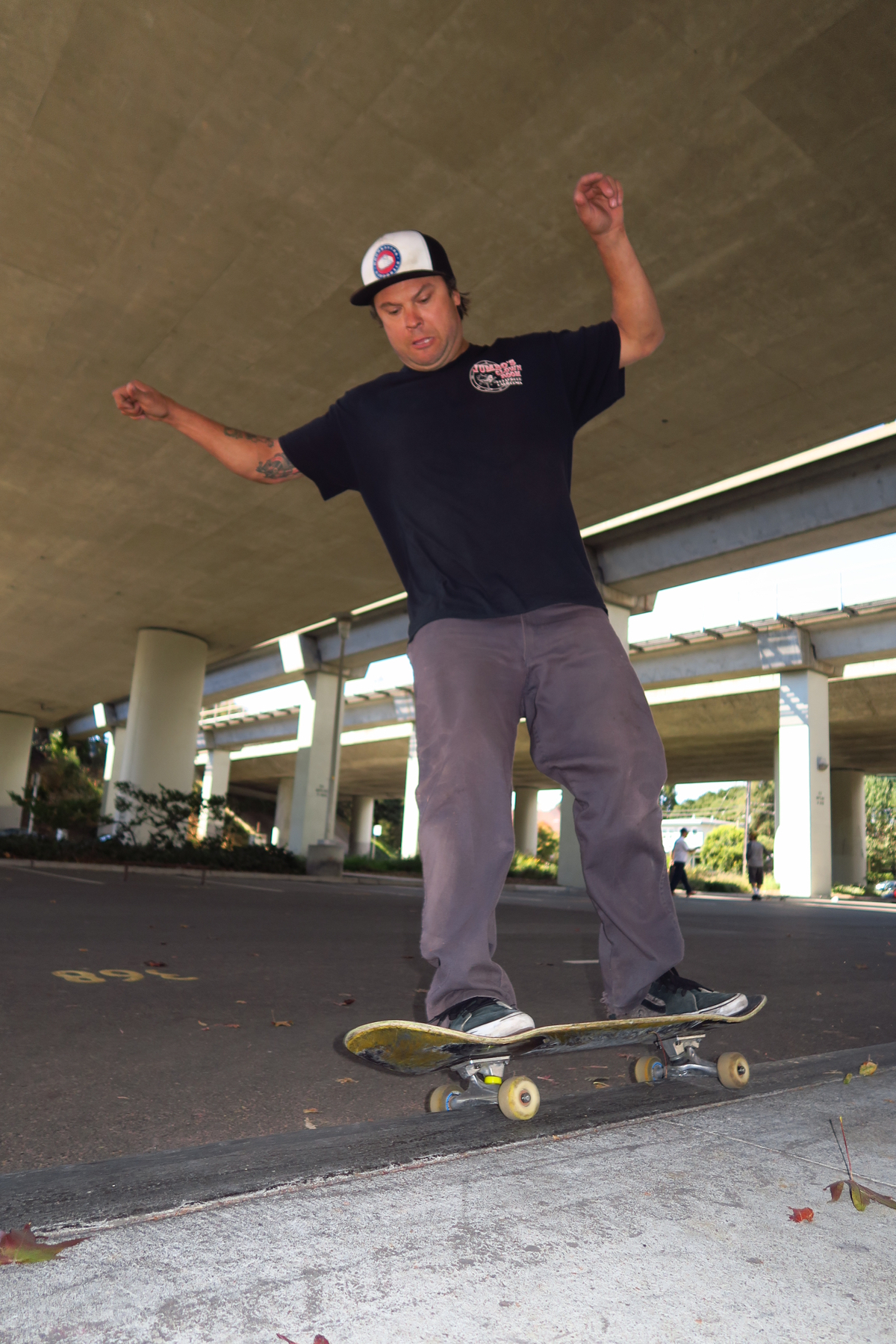 After some time, the ever-enigmatic (and long time anti hero of mine) Ricky Winsor (pictured here with the legendary TG); -pulled a mini bike out of the back of his truck and presented a challenge. The objective was to get towed into a curb grind, while never letting go of the strap; After a couple of my own attempts, I realized this proved to be harder than I thought, and while reflecting on the fact that I don’t have dental insurance, I gave up the proverbial reins to others who might have more success.

At the conclusion of a few more hours of off-goofing I was slow rolling to get my bag when I inexplicably fell on my ass. Luckily the impact was cushioned by a beer bottle I had in my back pocket resulting in what for all intents and purposes is a hematoma and bruised hip bone that would make a stuntman cringe.

Happily the bottle didn’t break, and I knocked a few more grinds out just so I could finish on a high note.

So the upshot is that I wish Kevin very happy birthday, and I thank all who were present for a great day with great people. Both the thirteen year old as well as the forty-six year old in me returned home, and sank into an epson salt bath with a smile on their faces.

Relating to this, and as a sort of footnote, it was some months ago when Peter Discoe (formerly of Swobo Enterprises) relayed a conversation he’d had with someone in which the person he was talking with asked if I only ever rode a skateboard anymore, and had completely abandoned bikes. While I appreciate their observation, it obviously is a ridiculous one, as bikes are and will continue to be my life force. I’ll just state, as I did two years ago, that it was then when I not only I felt healthy enough to ride skateboards on a regular basis again, but primarily after twenty-seven years wholly committed to the bike, I simply found a need to move my body in a different way than cycling provided.

And as I declared in the manifesto back in 2009, I wanted this site to be a place where lots of people with similar interests could come and find a home;

All Hail The Black Market is a collection of stimulating flotsam, hand picked and curated with loving care in the singular hope to put the ‘cult’ back in bicycle culture. For too many years the bicycle industry has marketed to itself, a gigantic dog wearing blinders chasing its own tail. A place where artists, musicians, skateboarders, cyclists, photographers, thinkers, dreamers, pranksters, schemers, and general purveyors of mayhem can all come together in this- a bazaar for the bottom dwelling creme of the crop. An alternative market place and hub of information exchange…

Welcome to a new world order.

Welcome to All Hail the Black Market.

The impetus that first drew me to skateboarding was the same that drew me to cycling, and I know I’m not the only one who sees a connection. If it’s not your cup of tea, I can appreciate that, but it’s important for me to wear the hats of all my interests here, because I don’t look at this site’s readership as just cyclists. That’s an unfortunate sort of linear thinking that I think is all too prevalent in the bicycle world. We are a multi-talented, and multi-versed group whose lives aren’t just invested in a single discipline, nor are our identities defined by a single thing we do, and we readily invest our brains and our bodies in those other directives.

The crux of this site is simply to provide a place to meet and share those interests and experiences, and it’s an idea I will commit to until the day I die.

Moving on to other matters now, from Ian of Castelli sent me the following video of a fella playing metal songs with no distortion, because why not?

It’s with that that I’ll chug some cough medicine, and return beneath the covers from whensce I came.

15 Responses to “Hello from the throes of a mid-fall cold.”