While the world seemingly is crumbling around our ears, we have a post to write, proofread, re-proofread again, proofread for a third time, publish, re-read, find errors, and correct, so without any more wasted time, let’s get to it.

The first bit of news is that Adam Myerson won gold at last week’s Nationals race in the Masters 45-49 class; 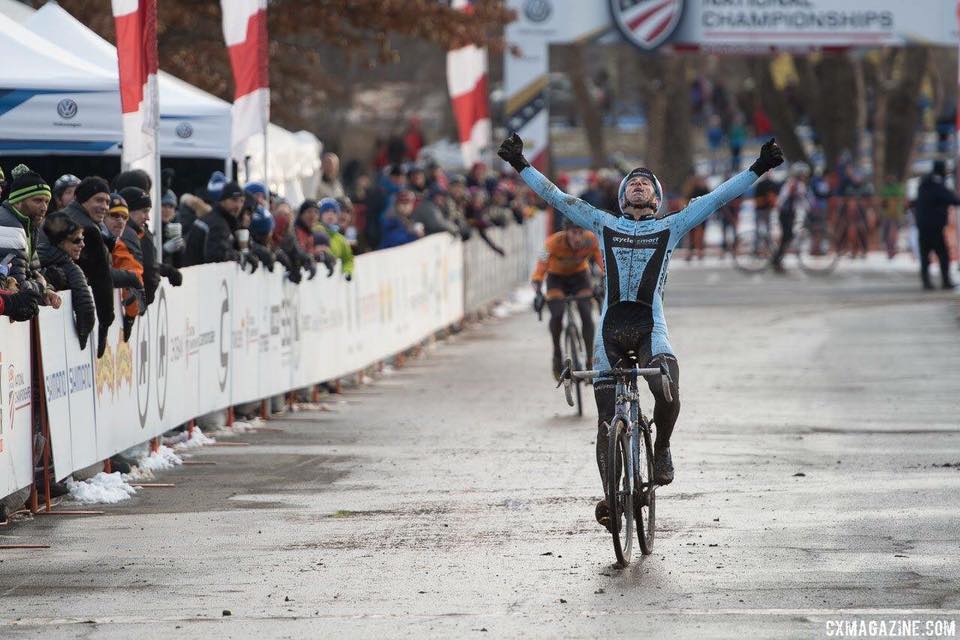 Of course the big news isn’t that he won, but rather that he won using cantilever brakes.

Is that even possible? Is this a conspiracy by Big Canti, or the cantilever-industrial complex? As the bikecyclering industry would have led me to believe, it’s no longer even possible to ride a bike with canti brakes on them, let alone win a Nationals title with them.

As Chris Carter and his X-Files declared so many years ago, the truth is out there, but one thing I’m sure of is that the world may never know.

Another bit of news that some may or may not be interested in relates to this image I posted the other day of John Tomac; 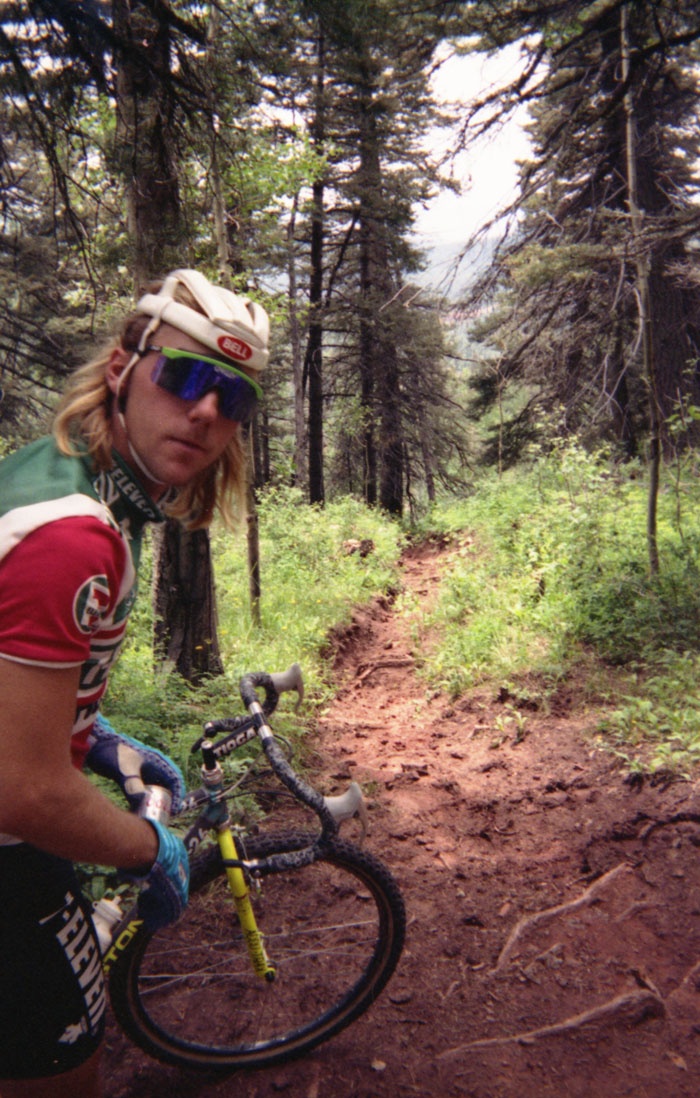 Well, a fellow named Tom got in touch and notified me that he was in fact actually the photographer behind it. Upon asking if he could elaborate a bit, he did so thusly;

I have tons of old training stories with these guys prior to Worlds in 1990. This was one of my first rides on the Paul Turner built Rockshox. I think there were about eight of us riding them at Worlds.

What’s funny is the Coors Light in his hand… He had found that the winter prior while he was Elk hunting. It was in the creek. We didn’t drink it.

Right after this photo we dropped into a rough trail, Johnny, Herbold, Me, then Texas. HB started yelling at JT from behind me, “Rockshox, Rockshox, Rockshox” as JT rode in the drops, basically riding his front wheel through the stuff until we got to a wider spot and HB passed both of us; 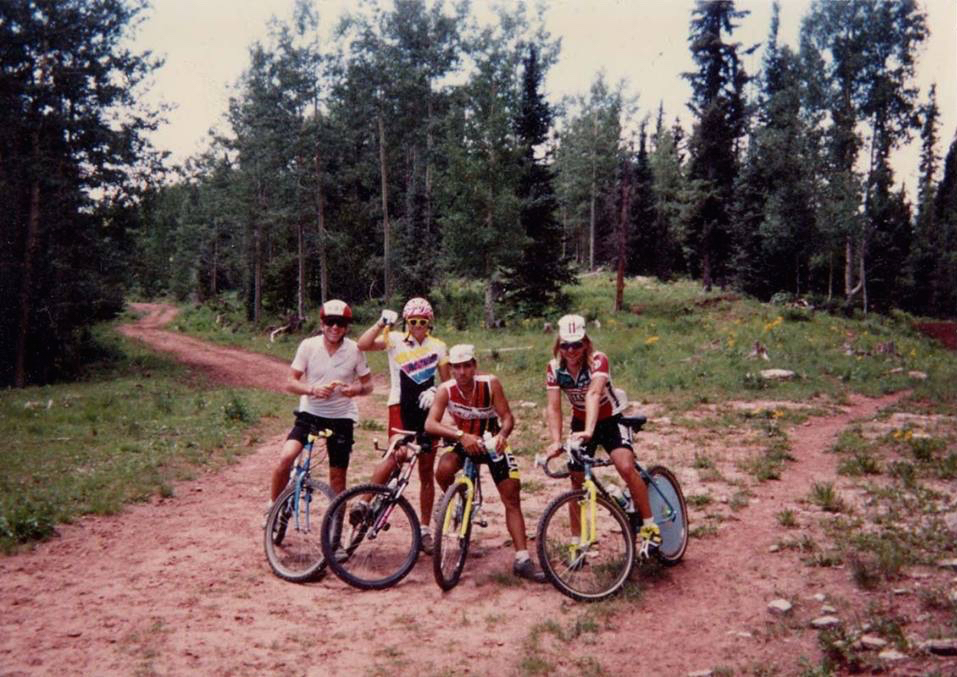 That was within a month of Worlds in 1990. If you check the Worlds photoage, JT has a Manitou suspension fork on his bike. He needed a bit extra after that day on Red Creek. He got 4th in the DH and 6th with a flat in the XC. I got 8th in both!

I’ve seen both of these photos for years, and never knew the story. I thank Tom for his time, the history lesson, and filling the gaps in one of my favorite cycling images in the history of forever, amen.

Moving on from two wheeled nerdery to four, I hope anyone who cares to know is aware that the second annual shut-in virgin Olympics is currently under way;

And assuming you can track a copy down, I found a title that could potentially help folks try and secure a victory; 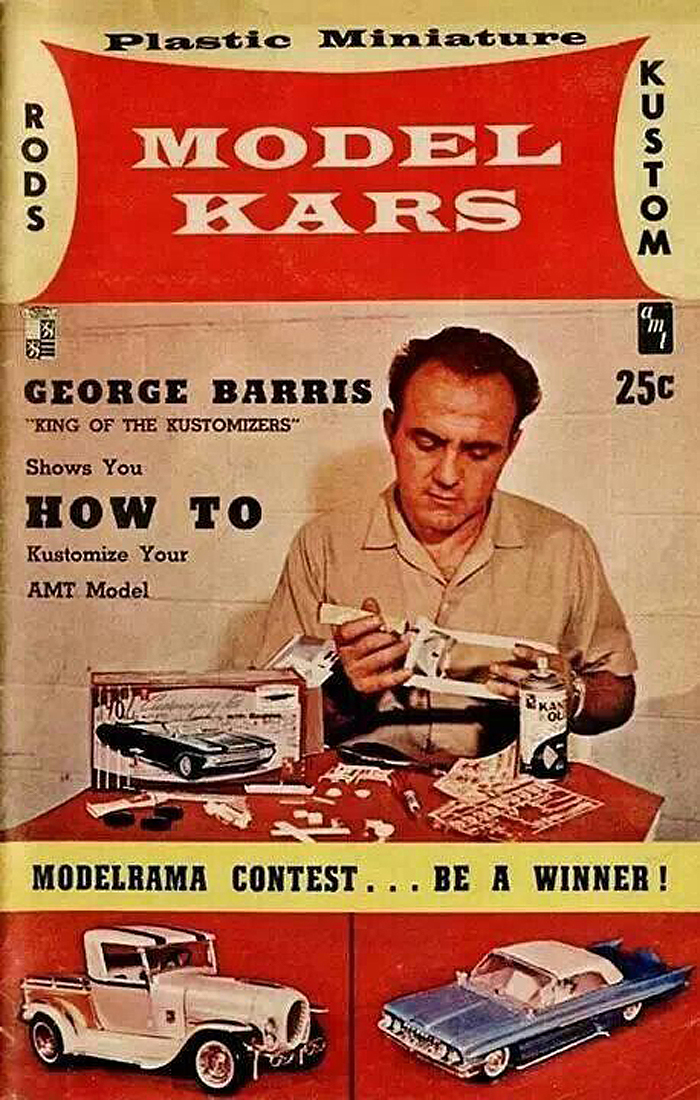 Going down the rabbit hole as I have around this time for the last two years, I came across this guy named Michael Paul Smith who’s OCD is on a whole ‘nother level; That aside, since my immersion into building model cars, a thing that has perplexed me is exactly how model kits are made. If you think of the hundreds of individual pieces that go into a model car, (not to mention the thousands on an actual car), each of those have to replicate an actual part off of its life-sized likeness. Someone had to document each piece, hand carve it, and make a mold of it. This doesn’t begin to cover custom cars where all parts involved aren’t going to be standard. Not that I’ve lost sleep over this, but I have dwelled on it with more frequency than is probably normal.

As I was perusing the web in order to find a more suitable image for an updated flyer (I couldn’t find one), I actually came across this article detailing a visit to Revell’s Illinois headquarters; 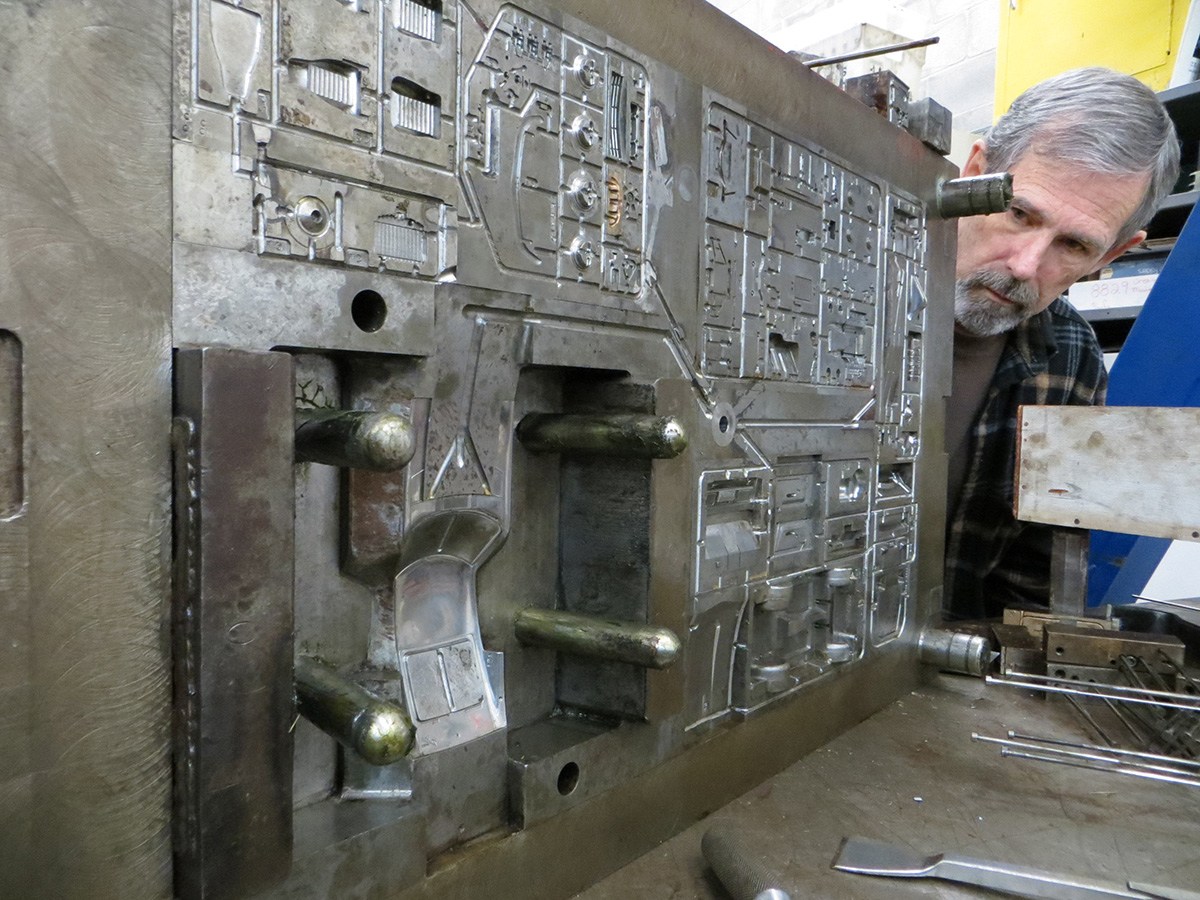 Anyway, if one would want to take part in the aforementioned competition, as I’ve said before, you have until the 28th of February to complete your build, shoot photos, and email them to me at stevil(at)allhailtheblackmarket(dot)com. Winning a whole year’s worth of bragging rights has never been easier.

As perhaps a little slice of inspiration, I’ll now post an image and relating story about one I recently built as a warm up to the main event;

When I was a little kid my family had a 1966 GMC that we painted with green house paint. One time when my dad and I pulled into a service station and he went inside, I jumped out of the cab and hid in the back of the truck thinking that I was going to pull a funny prank on him. Little did I know that he was going to the service station in order to pick up a spare tire, which he then threw into the bed of the truck landing it squarely on my head. In my second grade school pictures I actually have a tire tread imprint on my forehead. We had good times in that truck. Anyway, as a warmer-upper for #thegreatahtbmmodelbuildingnerdoff I opted to build a tribute, except it's a Chevy, and the suspension is from a Rubicon, and it's small and made from plastic. Otherwise it's totally the same. If you're interested in taking part, build a model car or truck, shoot photos, and email them to stevil(at)allhailtheblackmarket(dot)com by February 28th. The winner will win stuff, and the losers will not.

As I’ve also said, besides some other random garbage, the winner will walk away with their very own AHTBM replica wool Bandit jersey; 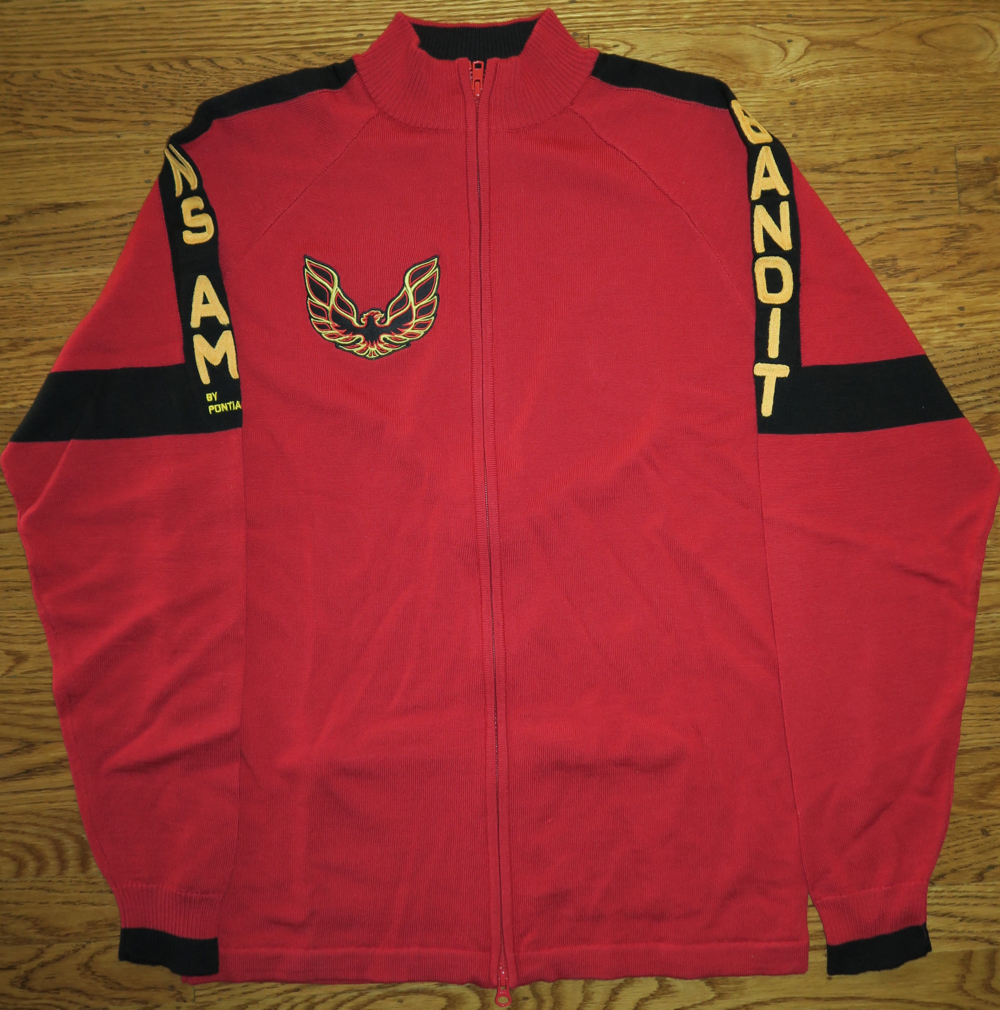 Appropriately, Tanker just happened to come through with an email letting me know he’s still enjoying his;

I don’t know if you remember the story about me getting a Bandit jersey, but I just wanted you to know that the jersey’s living a good life in northern PA; The world might be going to H-E double hockey sticks in a hand basket, but as long as there are folks like Tanker running around the frigid woods making stachecicles, bikes with cantilever brakes can still win races, John Tomac continues to walk among us, and there are little toy cars for us to build, I will retain a modicum of hope that everything will in fact be fine.

5 Responses to “Everything’s gonna be fine.”