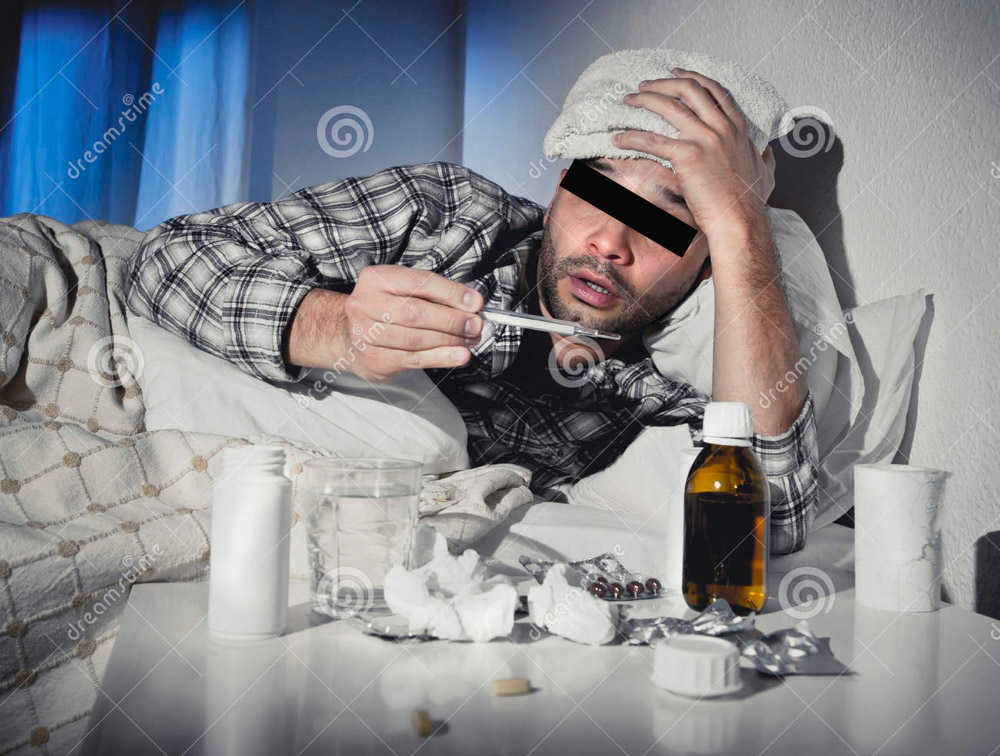 If you see my family, let them know I loved them.

So, as it turns out, if you have a slight tickle in your throat, it’s best to not spend six hours shivering in the driving rain, regardless of how many makeshift shelters you find for yourself;


So now here I sit, being crushed under the weight of my own phlegm.

Luckily I have compatriots in the trenches with me who do the heavy lifting when I’m unable. One of said compatriots of course is Hodala Sally, who, as proven by his latest missive, is the master of his own lifetime of bad decision making;

Hey there my struggle cuddle partner,

It’s been pretty well known that Hodala is a team that was built without a foundation of fucks. Part of this is due to the nature of the Single Speeder and the culture that has helped cultivate this mentality (I might be looking your way on this). The other part can be attributed to the amazing people who repeatedly host events and tolerate us year after year. Case in Point, the fine people at MFG Cyclocross here in Seattle who have often turned a blind eye, or merely crossed their arms and shook their head back and forth like a disappointed parent when our “soup kitchen” of a trailer shows up; 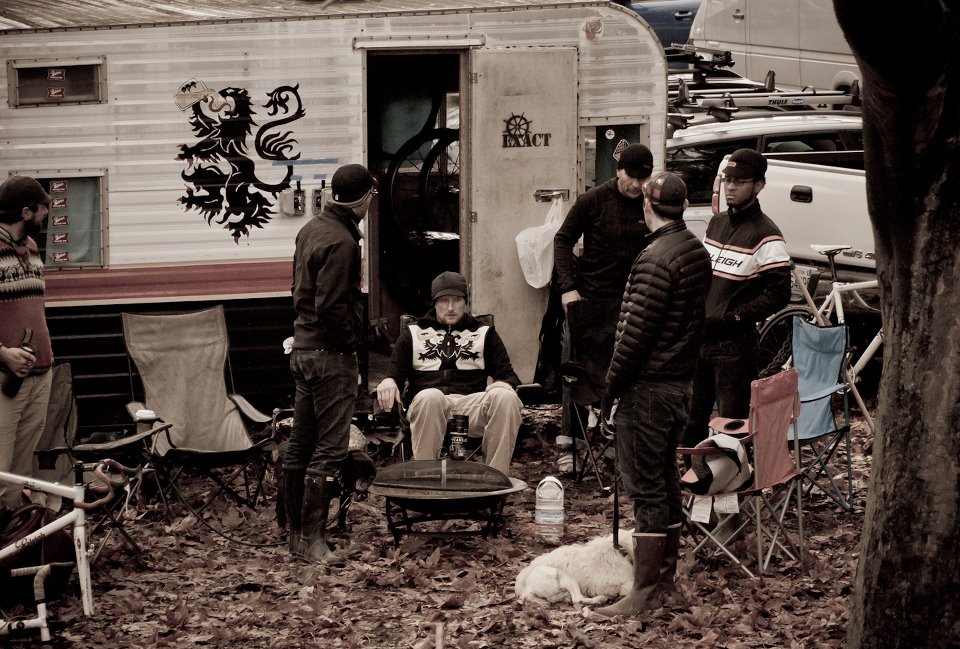 With no intent on traveling to #sscxwc in Italy (you’re welcome EU) we turned our full attention to the crown jewel of Seattle CX….Woodland Park. In years past we’ve hosted luau’s, beach parties, a disco, 80’s metal fest and have often created a winter wonderland at what has been dubbed “Hodala Corner”. This year’s plan was a little more ambitious…make a ‘long cut’ with a giant slip-n-slide and a foam pit. We figured it would take 30+ pallets, some plywood, a big roll of visqueen, over a dozen bottles of dish soap, 3 kegs of tasty beer and a leaf blower; 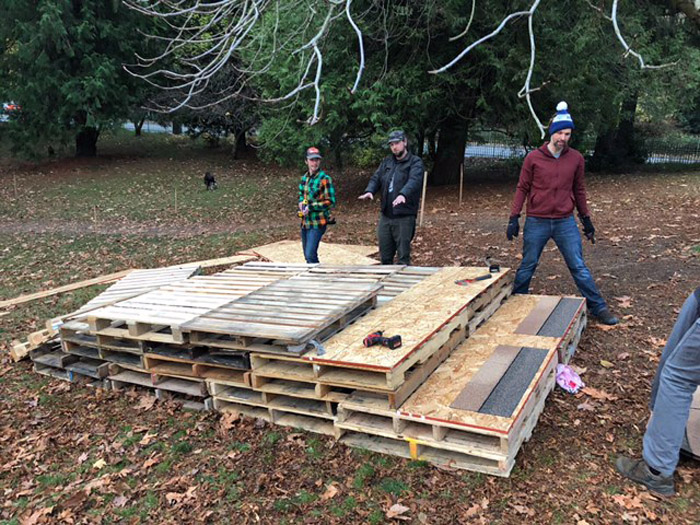 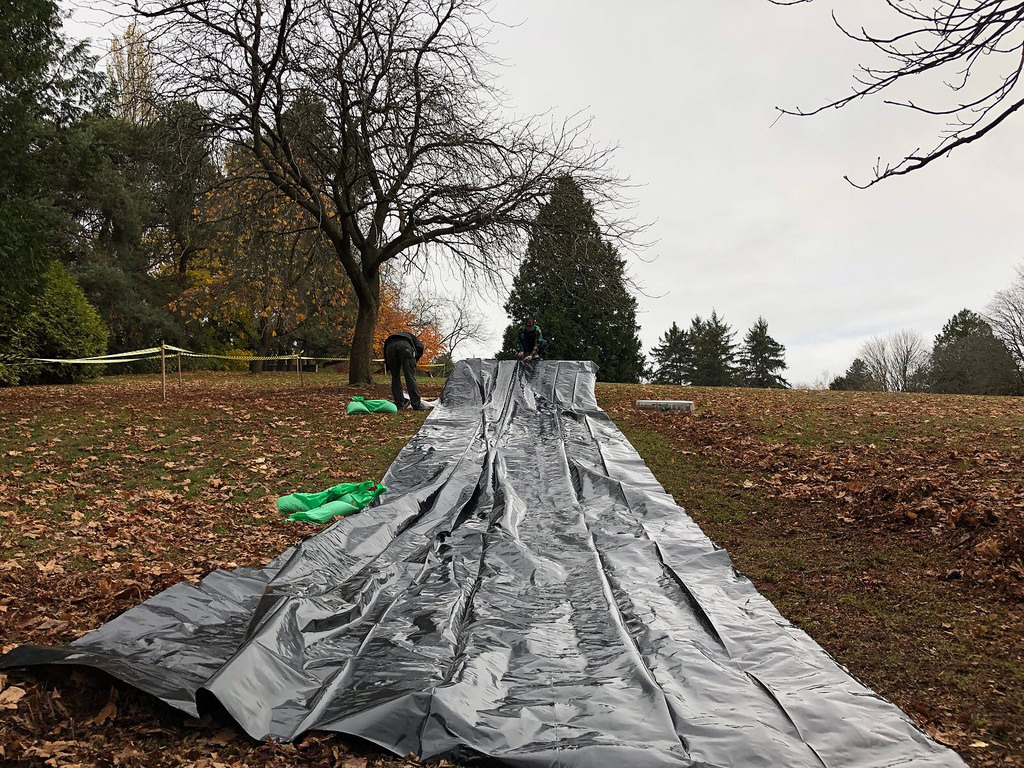 Disclaimer, this is not legal in most forms of racing and I’m sure would be punishable at an OBRA race with a DQ and forfeiture of all Rapha apparel. We did not alter the course in any way (we merely created an ‘option’) and we got permission from MFG in the form of a subtle ‘don’t make a mess’ response.

To be totally honest we had NO idea about what everyone would think of it and were hopeful that people would partake in the little bit of fun we were trying to create. By the end of the day we were beyond stoked with the number of people who ‘opted in’ for the shenanigans and completely blown away when the leaders of the Pro ½’s race (with the overall series title on the line) came to an accord and giggled their way down the ‘illegal’ course option covered in Hodala foam. Like finding the true meaning of Christmas, I guess it really is possible to race a bike and have some fun; 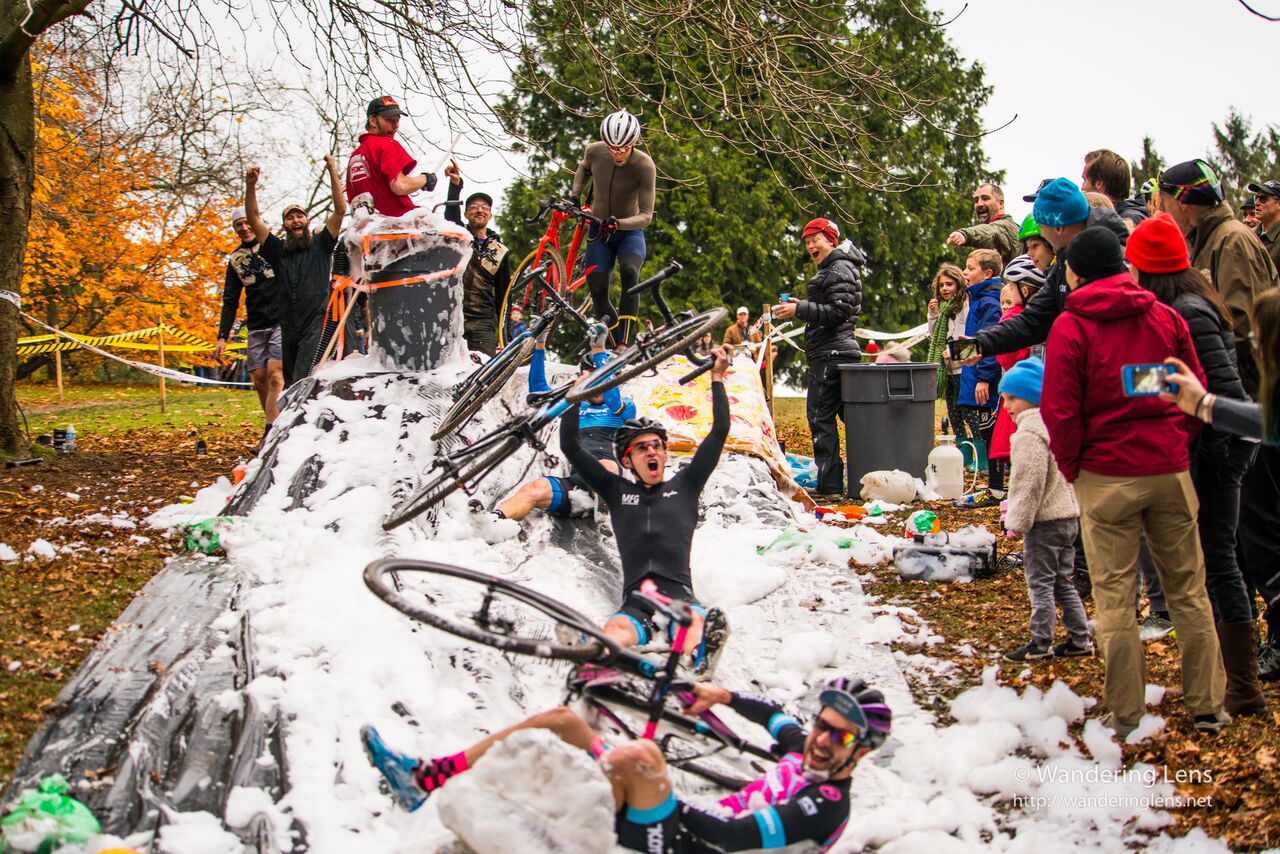 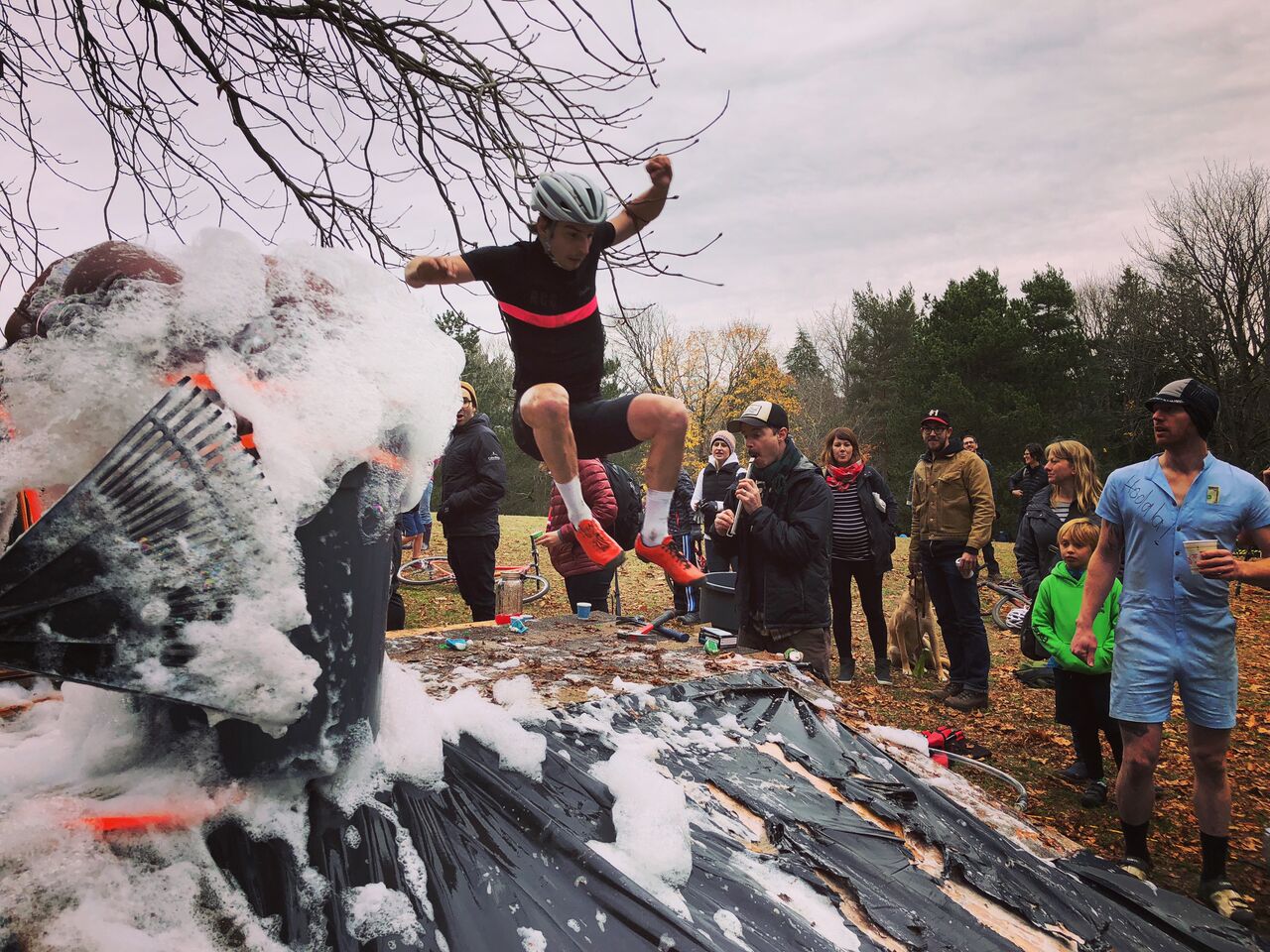 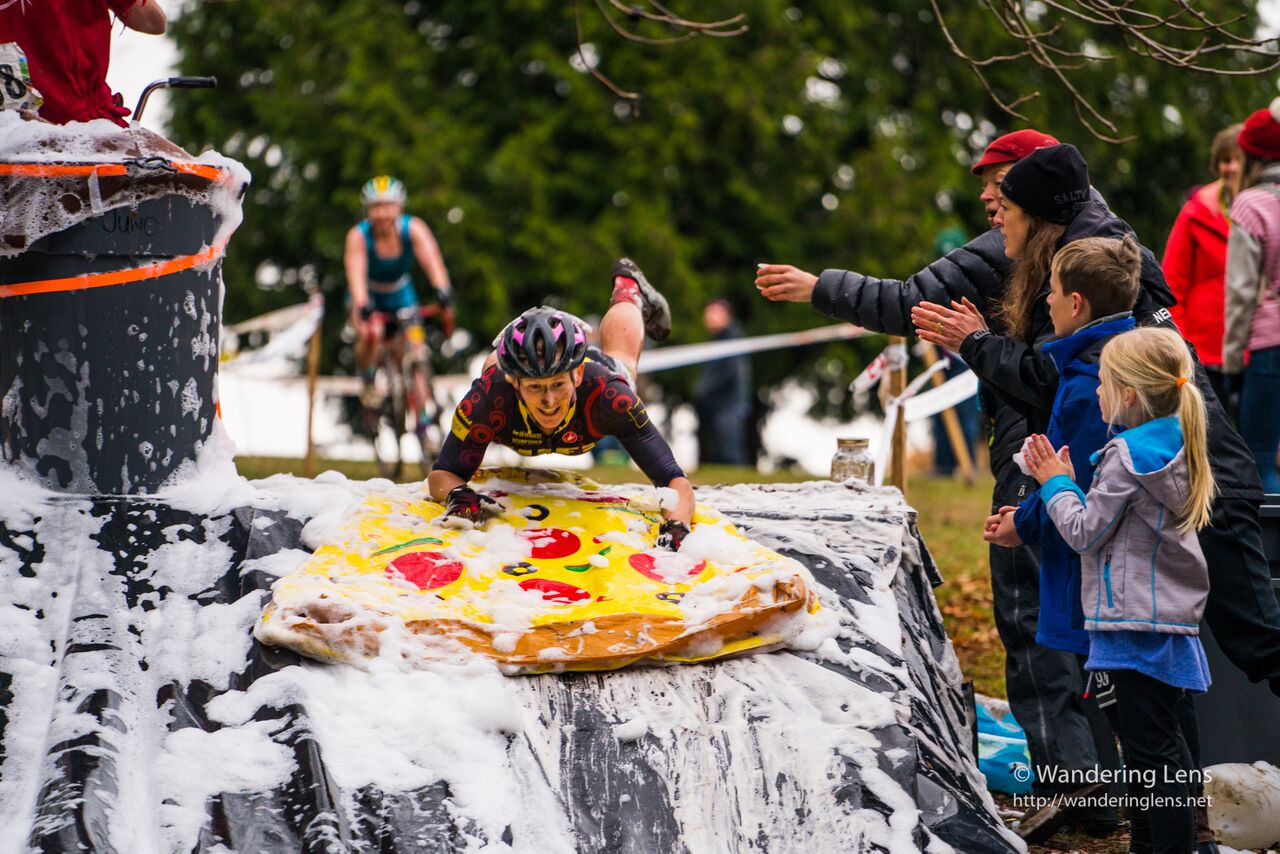 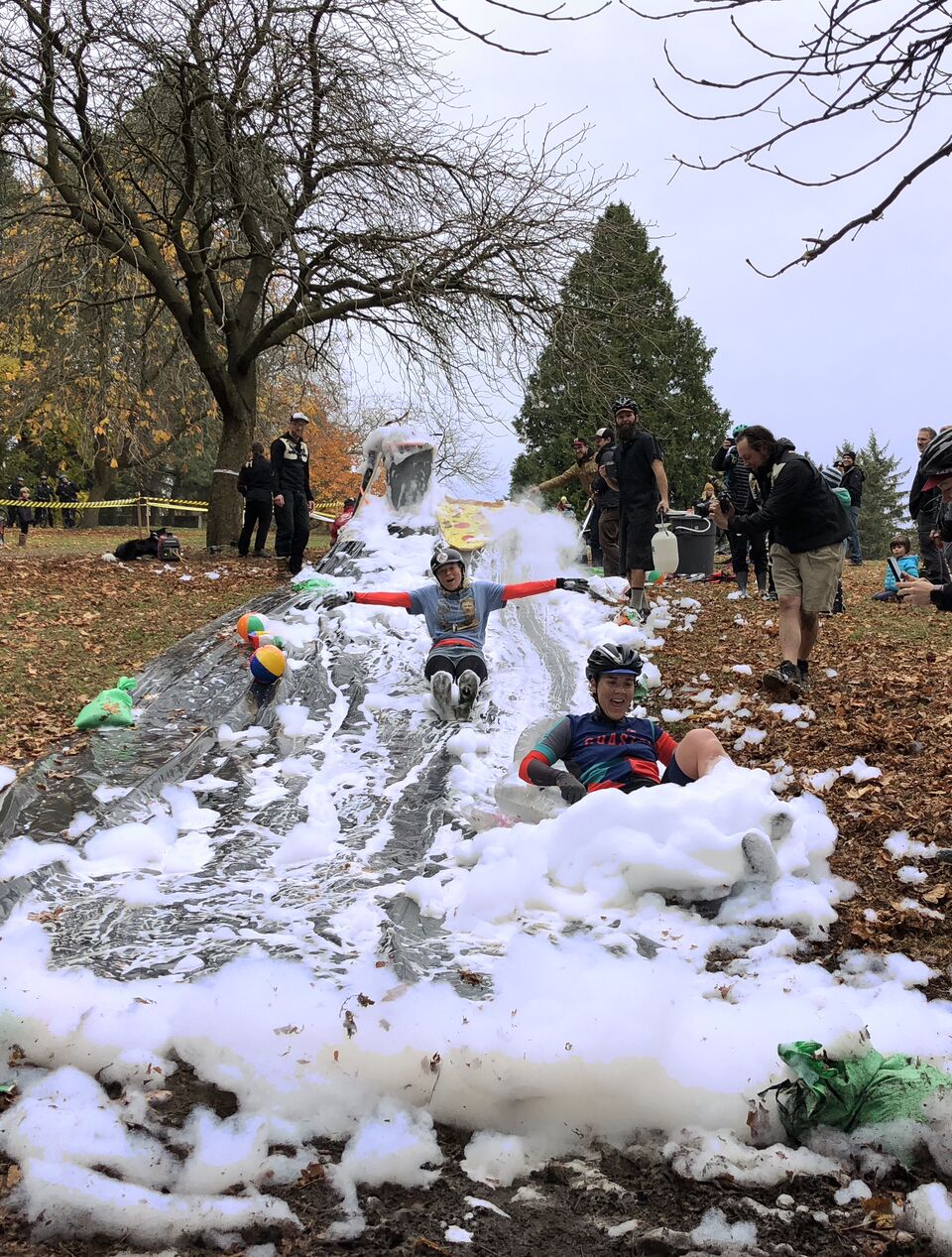 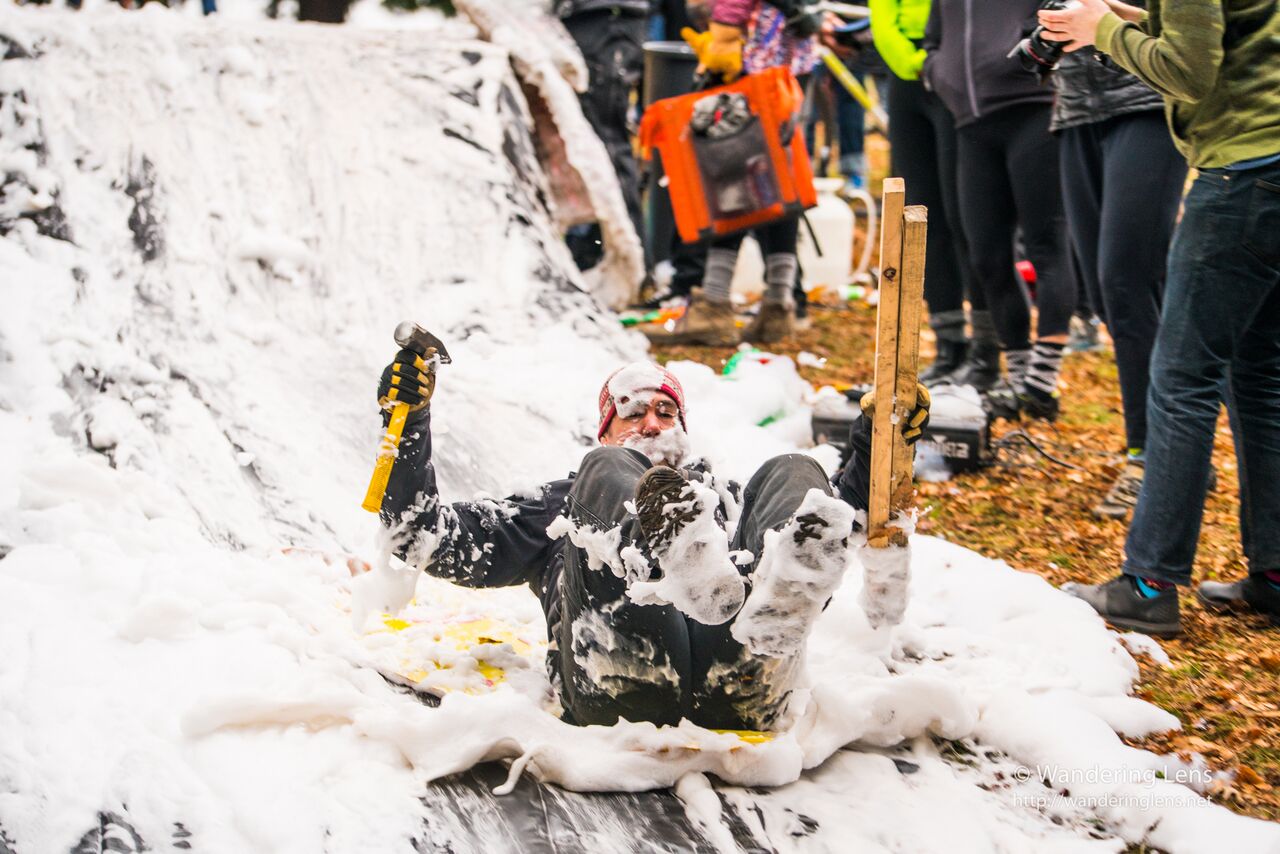 Photos courtesy of Wandering Lens.
I’m sure there are *some people out there who will find some kind of fault in what we did and maybe claim that these kinds of antics are ruining cross; 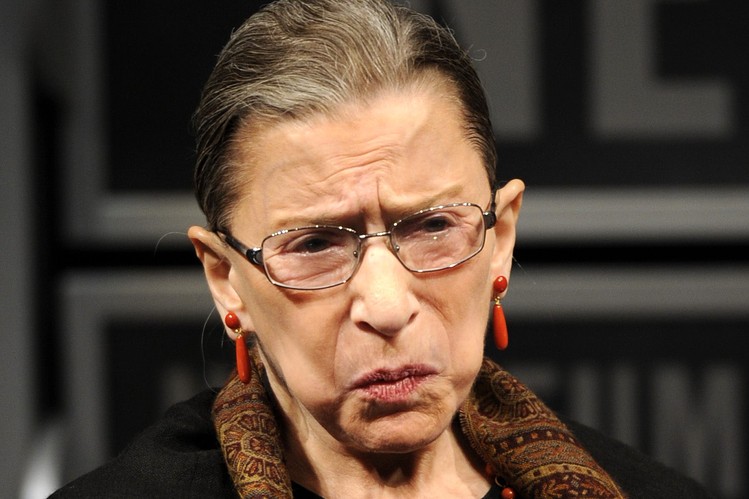 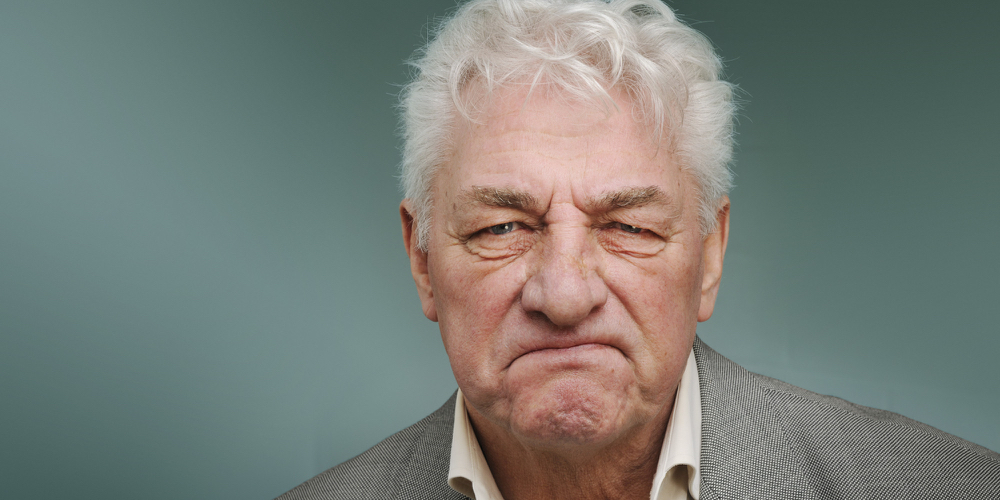 *Editorial license.
-To which my only reply is to crack a beer and salute them in their pursuit of outstanding results in their athletic endeavors. Meanwhile, we’ll just place another 6-pack in the pit area and continue to spread our own kinda racing around.

I realize ours is a perspective that isn’t shared unilaterally across the board, because while some are racing their little hearts out to get a top twenty in the Bs, this might seem as some sort of an affront to their commitment to their hours of training, and the honorable legacy of cyclocross.

But I reckon those people will probably have their bikes for sale on Craigslist within the next two years, and will have gone on to pursue their newfound passion in CrossFit, or whatever.

I think I can speak for the rest of us when I say Hodala’s efforts in keeping the bikecycle racing ridiculous is greatly appreciated.

Now, moving on from two wheeled antics to those that occur on four, those who frequent this dark corner of the internet might recall our introduction to a company called Thee Teen-Aged, (here and here if you’d like a refresher.)

Well, those folks have been keeping their nose pressed firmly to the grindstone and have just announced the release of their new line, Tough Kid; 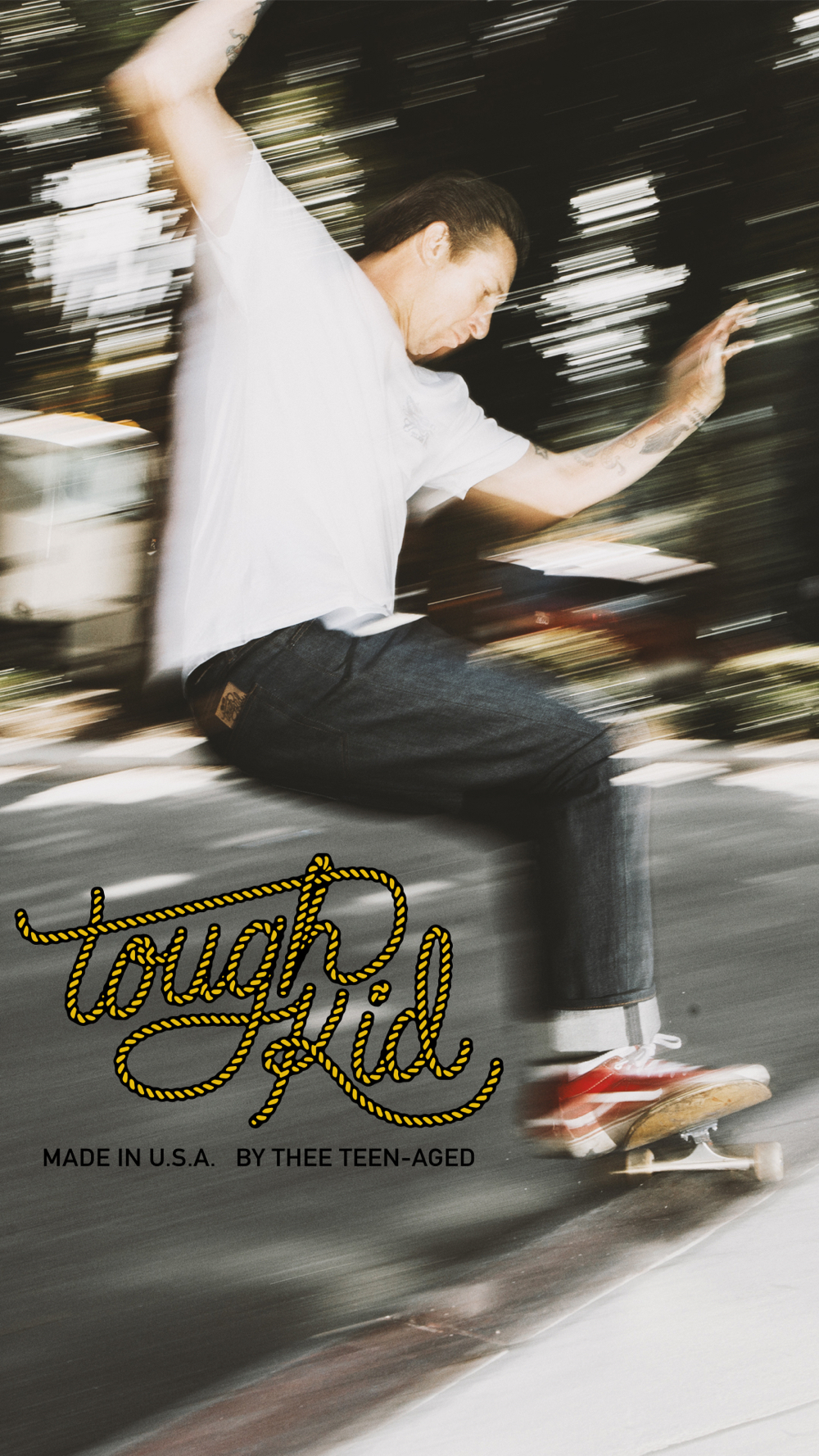 Being a fan of both rollerboarding, as well as falling down, I’m clearly the type of individual who’s in need of such an imprint, both being proven by my recent pro edit;

I have many nemeses in my life. Some living, breathing beings, and some inanimate objects. Here is but one of them. Too much speed and you overshoot the lip, and/or get your feet all tangled up. Not enough and you either flaccidly carve along the bottom, or come to a dead stop upon re-entry, both of which I’m maddeningly familiar with. Some days you’re the hammer, and others, you’re the nail. I’m usually the nail. At the end of the day, ‘they ain’t too many 47 year olds who can take a punch like I can. ? the ever-talented, youthful, energetic, handsome, enigmatic, humorous, positively positive, and endlessly patient @emptyqueue_


Every day the Thee Teen-Aged exists, is another day in which the knees of my pantaloons will remain intact despite my best efforts for them not to.

Lastly, and relating to stuff you want, but don’t need, but kinda do, it’s with great happiness I make mention that I spoke with Danks Bags’ Corndog the other day, and he mentioned he is gonna soon be sending me one quarter of the second half of my order of Stuntman Association cüzies this week; 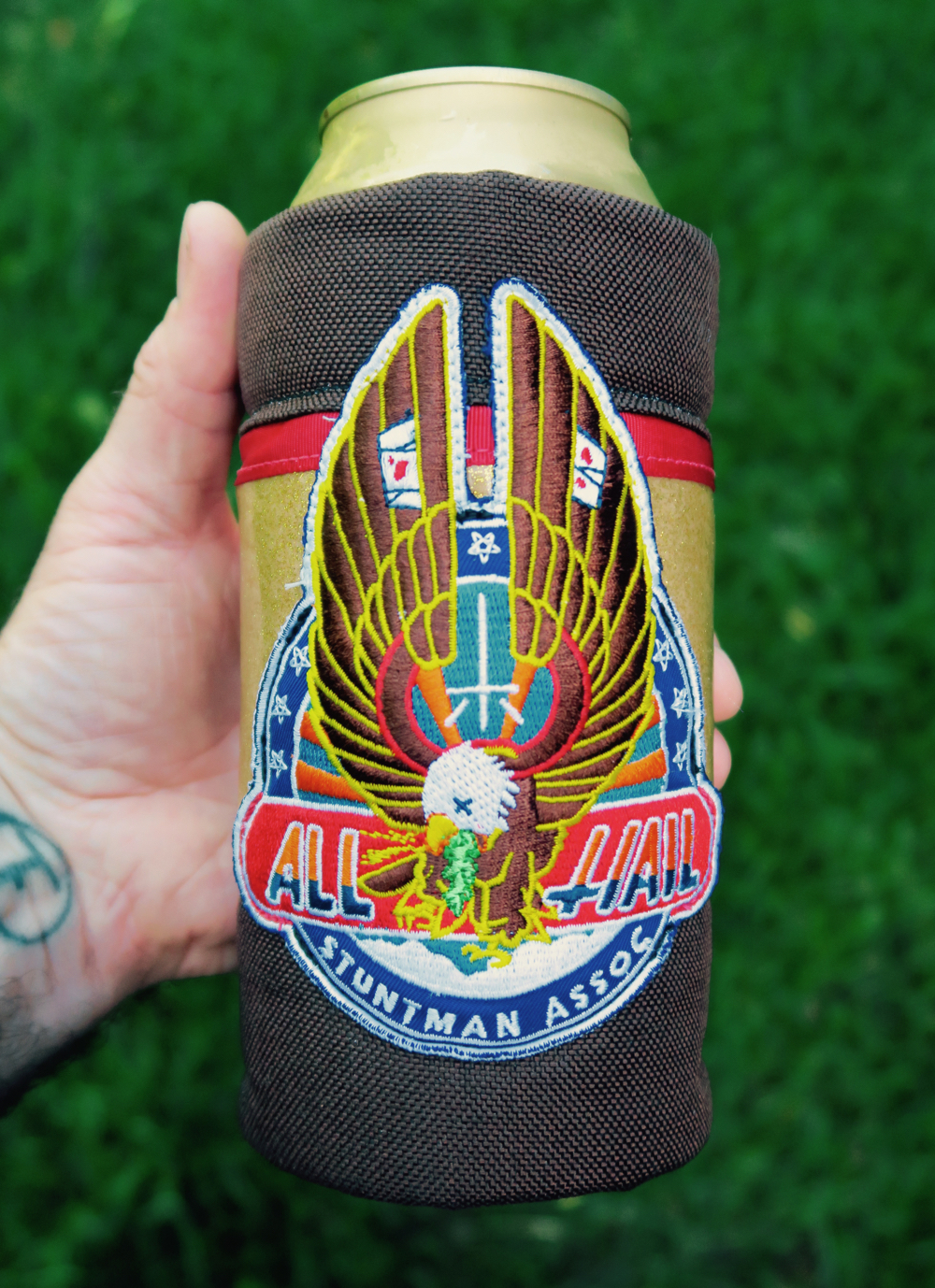 The last quarter of the order will show up either as soon as he gets a new order of brown material, or at some point months later than that.

The only thing I can say for sure is that the first half of my order went out the door in twelve minutes flat. If you sleep on this, prepare to continue drinking out of a bag.

It’s with that, I will return to the endless cups of ‘grandma’s tea’ (lemon, honey, shaved ginger, and cayenne pepper, natch), and hope for either health, or the imminent sweet endless sleep.