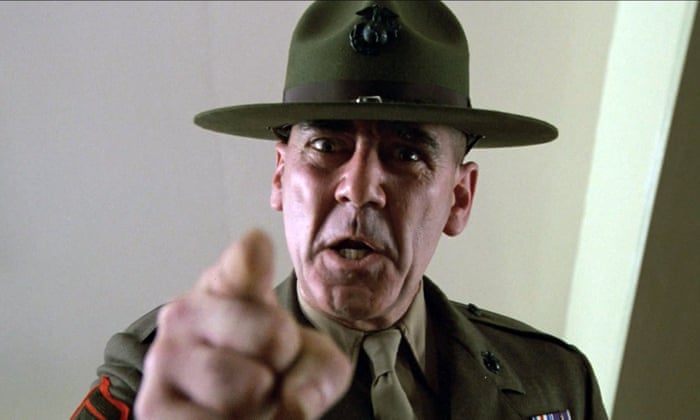 At the risk of hollering down this here echo chamber, man, do I hate the right here and now, and the administration who finds daily new ways of conjuring fresh horrors.

I mean, I’m safe, my friends and family are safe, but it all feels so, I don’t know… Tenuous.

One thing I keep close to the front of my brain is that perhaps all of this needs to happen. These are the difficult times and difficult conversations that prompt growth. We as a species aren’t as evolved as we’d like to think, and certainly, while some of us are a bit ahead of the pack, as a group, we have a lot of growing up to do. I just sit here with my breath held, and fingers crossed that the collateral damage that occurs in the meantime isn’t irreversable.

Unfortunately, it was on the heels of last week’s post, when I found out a different translation of the calendar states the world’s supposed to end this week, which among other things, makes it an extra bummer that I just paid my last year’s taxes.

Man, if it’s not one thing, it’s another.

If the world is in fact doing it’s swan song right now, then I guess it would make perfect sense that Hodala Sally and I have just done the unthinkable and released round two of the WSATU calendar; 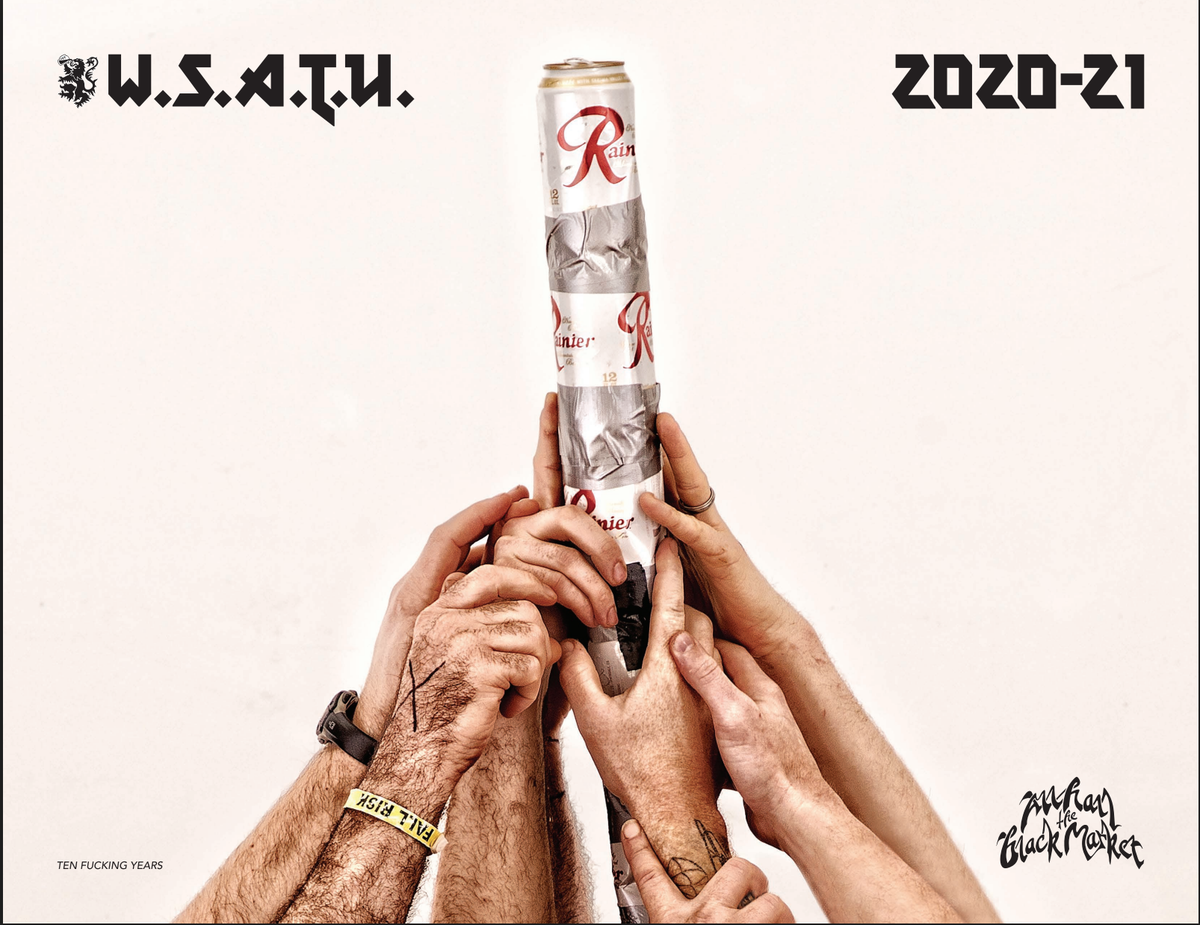 This (for no reason in particular) is 17 months of nearly full frontal male nudity, dirt, beer, and unmitigated shame, expertly shot by photographer to the stars, Mr. Earl Harper. that begins June of 2020, and ends in October 2021. Provided we’re still here by a week from now, rest assured that if you get one, by that point your eyeballs will be sufficiently burned out of your head.

So the deal we’re running is this- The calendar by itself is $25.00, but perhaps you’d want to go a step further with your purchase, and for $46,66 you can get the calendar, and a pair of the few remaining custom Voler Wizard Staff arm warmers; 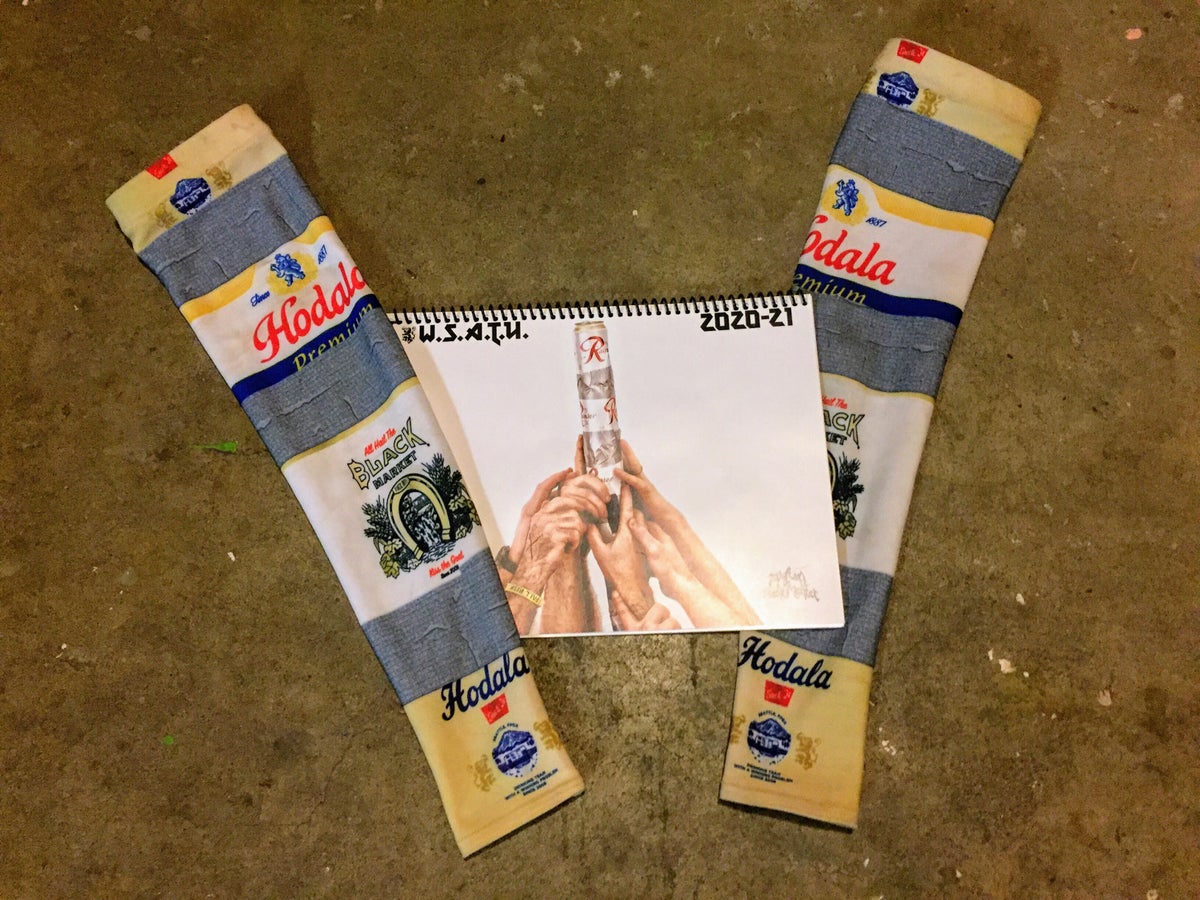 While the arm warmers by themselves are great, the calendar itself makes a great gift for an estranged ex, the former employer who unceremoniously fired you, or perhaps the upstairs neighbor who practices their bowling ball juggling/tap dancing routine at 2:00 in the morning.

Whatever the reason for your purchase, the regret will almost be certain.

Moving on from that topic to something considerably less eye-bleachy, I’d like to continue the current discussion of elevating meliorated voices, and further push a band who was doing that which we love long before The Bad Brains, and historically have been described as (not only among the world’s first punk bands in general), but the world’s first afro-punk band specifically. Though I’m no historian, it feels necessary to turn the heads of the few who might be unaware toward the grandfathers of the genre, Pure Hell;

Certainly The Bad Brains were my first introduction to Black folks in punk rock, and opened my young mind to a whole world of goodness, and I’m not sure why it took so many years afterwords to learn of Pure Hell. That said, I’m just glad that it happened at all, and further expands my perspective of a scene/sound/lifestyle that I love so dearly.

Another thing I love dearly, (and a related sect to which I wholly credit my ever-opening mind) of course is rollerboarding. Way back when, both of these things showed me, a young white kid in the mountains of Colorado, how beautiful and inclusive the world can be, and as I mentioned recently, I credit them both with teaching me to keep an open mind, and combat narrow-mindedness with acceptance.

Speaking of which- If you missed the multitude of times I’ve posted the following video since it was published last week, I encourage you to watch what is the final-ever episode of Love Letters To Skateboarding;

This is so bittersweet.

I love the support that’s shown for this group, I love that Grosso’s putting together the board I released for Cher, I love that this video is very well saving kids lives, I love that the day they were filming at Rockridge I got to see Grosso, and slap hands, and catch up on each other’s lives, and I absolutely despise that he was dead three weeks later.

But what an outstanding legacy to leave behind.

In other stories of making an effort to leave the world in slightly better shape than when we found it, perhaps you recall the saga of our very own Chuey when in 2012, he himself got jammed up by police. Were it not for the support of our community, (the folks around here, certainly, but also the folks around the world who helped both with contributions to his legal fund, as well as letters of support to the prosecuting attorney), he most certainly would have wound up in prison.

This was my first time seeing how truly profoundly broken the system was, and as a Black man, that in the eyes of the law, he was guilty without so much as a whisper of evidence against him.

He emerged from that ordeal with PTSD, and lingering injuries, but at least he was alive. Over the years since, I can’t help but think about his experiences with every news report that details similar circumstances, and certainly, in the last couple of weeks, it’s never far from the center of my mind. After having spoken with him on the phone a few days ago, I felt compelled to do a little painting of our dude, and then decided to put it up for silent auction, with the money ultimately directed to a cause of his closing, which he’s decided is a local one called King Makers Of Oakland; 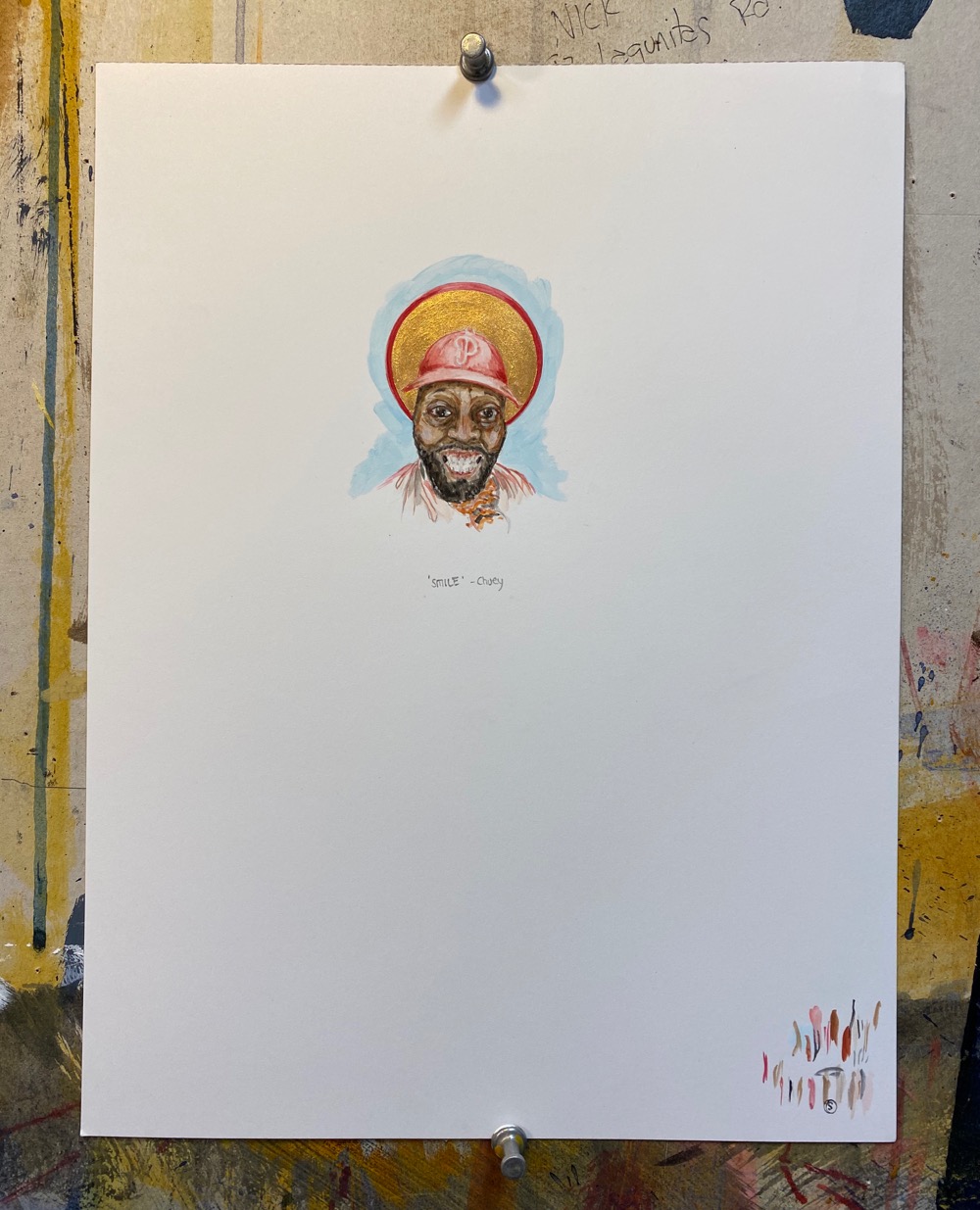 I figure I’ll keep the auction cooking through the week, so if you feel compelled, hit me up at stevil(at)allhailtheblackmarket(dot)com, or through the contact button up at the stop of this site, and make an offer.

Lastly, and before we part ways today, I’ll make a quick mention of final businessie types of matters, being that I just a few days ago got a brand new batch of L/XL Sockguy made Black Sole socks in stock; 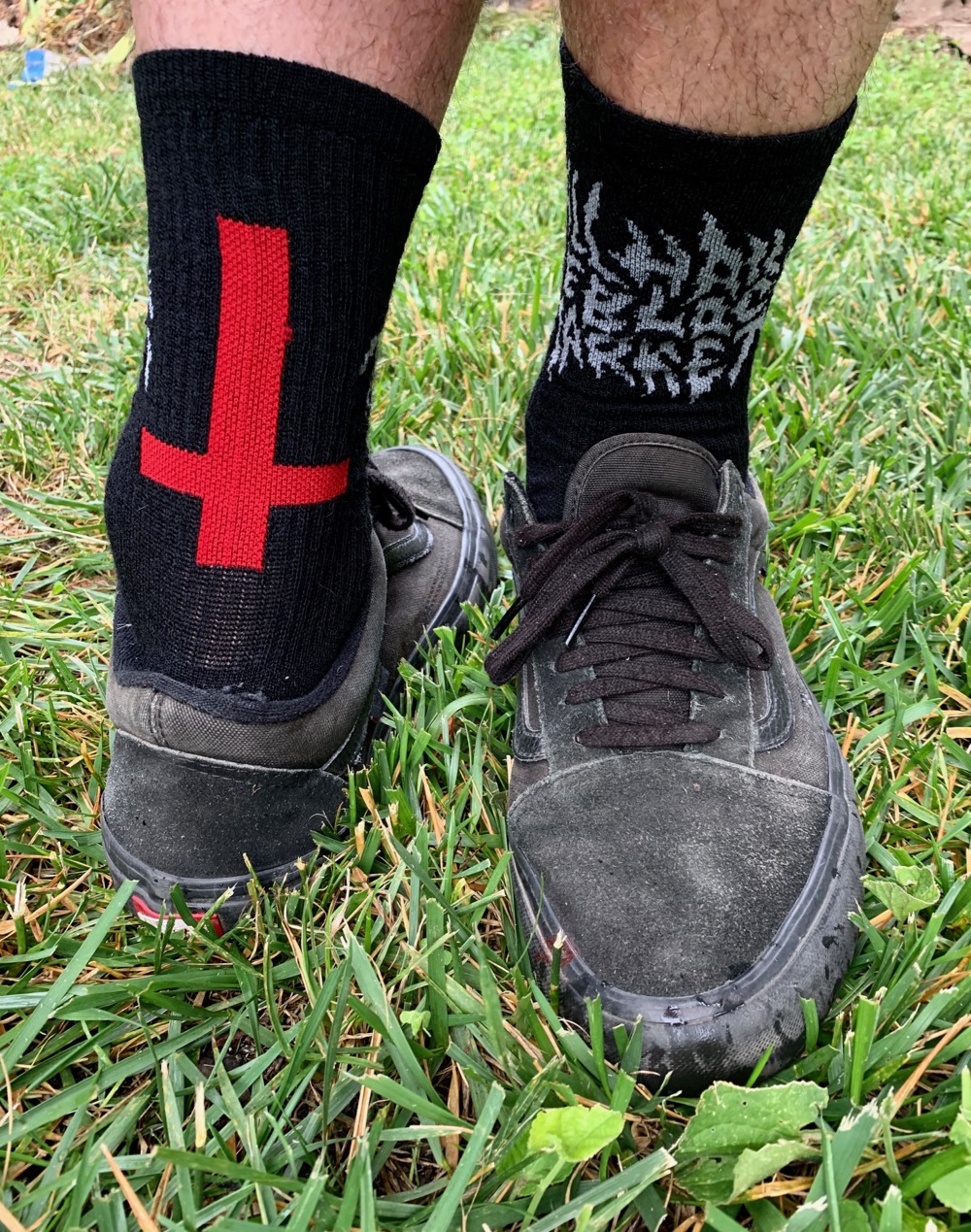 These are their wool blend, and next to taking off ski boots, getting into a clean bed, and clocking out after a day of work, slipping into a pair of these is one of my favorite things.

Because if we’re gonna buckle up, we’d better not neglect our feet.

One Response to “Buckle up, buttercups.”